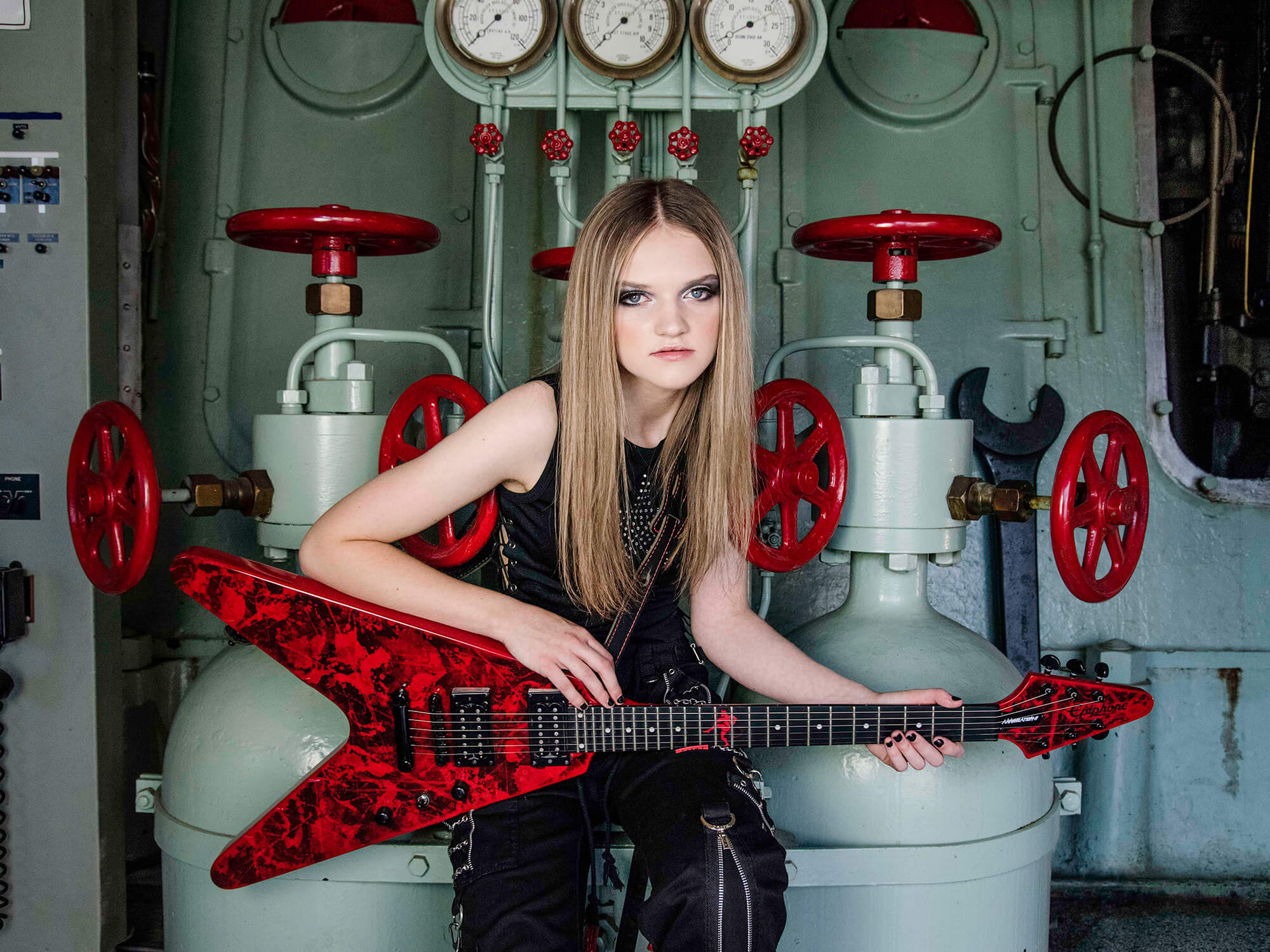 Meet 10 of the hottest young guitarists lighting up the global rock and metal scene today.

There’s a plethora of young guns out there staking their claim among the masses, ready to usher in a new era of shredding. Now more than ever, the world of guitar is flush with exciting up-and-coming talent. In many ways, it feels like the proverbial passing of the torch is underway at the moment, with many guitar heroes of the past settling into complacency or succumbing to time, while their successors snap at their heels.

In the spirit of all things shiny and new, here are 10 young shredders shaping rock and metal today.

This 17-year-old Ontario native is making waves in 2022 and beyond with her classic rock nuance and outright shredding abilities. Known to brandish an array of V-shaped and single-cut guitars, Leveque’s soaring style and hot-rod aesthetic are sure to have her populating the public consciousness for years to come.

Like many shredders before her, 19-year-old Jasmine Star makes her home in Los Angeles. Her meteoric rise has largely come via TikTok. Best known for her quick videos in which she covers classic tracks, Star is said to be putting her Music Man to good use as she crafts her debut EP. Stay tuned.

Now in his late twenties, Jommy has been a fixture of the European metal scene for almost 10 years, but he’s only recently landed in the US with New York street-metal outfit Spread Eagle. Jommy’s style harkens back to the late 1980s via his multiple Ibanez seven-string guitars, all fully hot-rodded in ways that would make the likes of Steve Vai and Joe Satriani salivate. With his ballsy style and a street-tough image, Jommy is set to help Spread Eagle soar.

The 22-year-old Netherlands native has made quite the mark for someone who has yet to properly embed herself in a big-name band. She’s had stints in Cobra Spell and is said to have joined Gramophone, but so far too few have heard Sinderen’s fiery licks. She’s popular on YouTube and her engaging personality runs through her fingers as she sets the fretboard of her Jackson on fire. Make no mistake: Van Sinderen is one to watch.

Death metal act Phobophilic have been turning heads in no small part thanks to Josh Poer’s seething licks. The North Dakota twenty-something has been at it since the band’s inception in 2016. Now several demos, two EPs and one full-length deep, Phobophilic have helped put Poer’s BC Rich-inspired heroics on full display for all the world to hear.

Hailing from Colchester in the UK, Dex Jezierski made bloody waves with deathcore outfit Thames Burial before going on to form symphonic metal act Ghosts of Atlantis. If their most recent single, //Devil’s Dawn//, is any indication, Jezierski’s powerful riffing and ripping solos should help shine a light on the group. Now in his late-twenties, the guitarist employs seven-string Jacksons to deliver his explosive style unto listeners.

At just 24 years old, this Texas native seems wise beyond his axe-slinging years. Alongside his older brother Victor, David Ziolkowski smashes 1980s hardcore punk with in-your-face, bone-crushing metal as part of Skeleton. Not dissimilar to Mike Crain of Dead Cross, the guitarist assaults his Fender instruments with little regard for their longevity – or that of listeners.

Netherlands-born Sonia Anubis wears her influences on her black leather sleeves. The 26-year-old loves KISS, and uses her 1980s-style Jackson rig to shred her way through shows in ways that would make the likes of Vinnie Vincent weak at the knees. Having already cycled through Burning Witches and Cyrpta before founding Cobra Spell, Anubis is following the age-old tradition of being an axe for hire.

As a member of hot-ticket UK metallic hardcore outfit Heriot, Erhan Alman is on top of the world right now. And given that he’s in his mid-twenties, the best is yet to come for this young shredder. Alman uses everything from SG-led rigs to Jackson instruments. He’s also something of a vintage tone-hound, having professed his love for vintage and Orange amps.

Spearheaded by Jackie Parry and her jet-black Charvel rigs and twin sister Jessica on the drums, California-based Dianthus have been on fire for two years now. What’s most inspiring about Jackie is her boundless work ethic, which has seen her rise to levels usually reserved for players 20 years her senior.