All About… Freddie Tavares

Musician, inventor and a huge figure in Fender’s history. We celebrate the life and times of Leo’s greatest sideman… 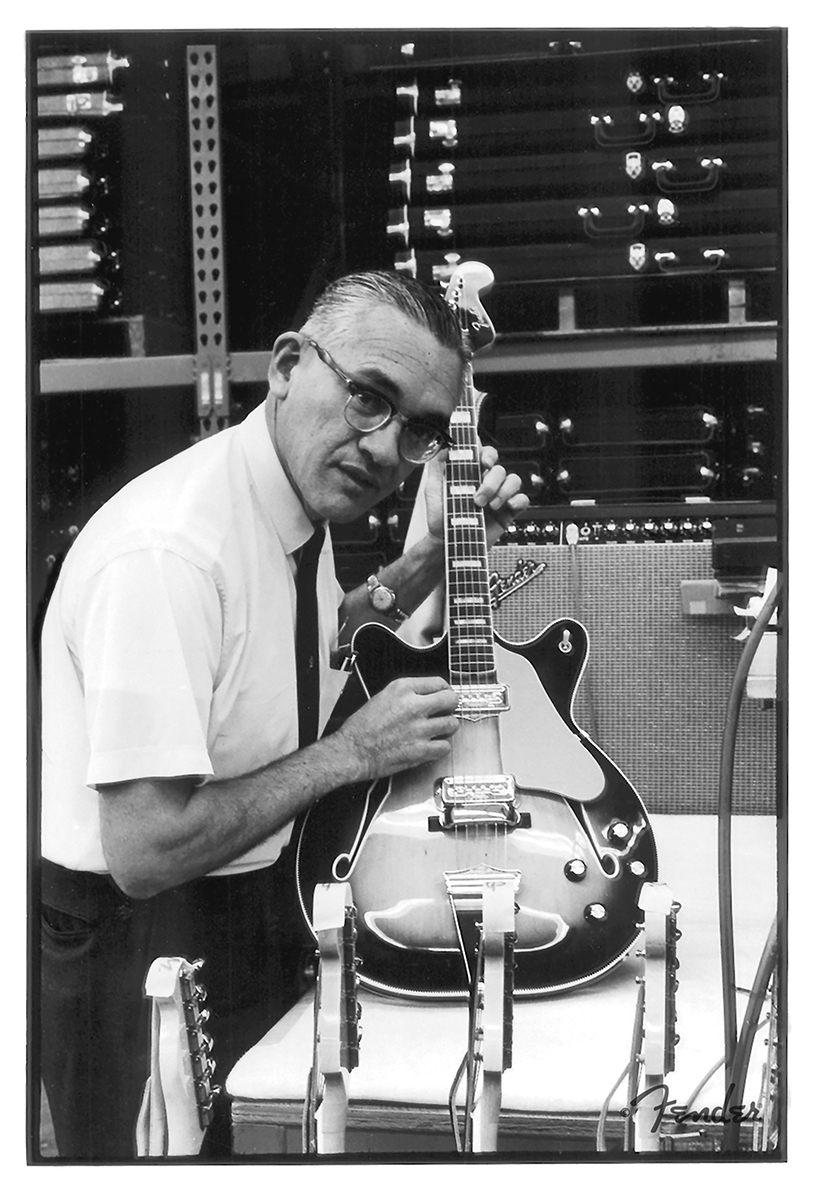 Even if you’ve never heard of Freddie Tavares, you’ve almost certainly heard him. That was Freddie playing the iconic pedal-steel glissando at the start of the Looney Tunes theme tune in 1942, and he can also be heard strumming the ukulele on Elvis Presley’s Blue Hawaii. But there was much more to him than that.

Freddie Tavares was a Hawaiian designer, engineer and multi-instrumentalist who also played for Bing Crosby, Dean Martin, The Andrews Sisters, Henry Mancini and Lawrence Welk among countless others. What’s more, he was also a key figure behind the scenes at Fender across four decades.

Frederick Theodore Tavares was born on Maui Island, Hawaii, 18 February 1913. He began singing early on and when he was 12, Freddie’s eldest brother gave him a guitar. He clearly had natural ability because three years later he landed the rhythm guitar chair in Mary Kunewa’s orchestra. Having finished school, Freddie moved to Oahu, playing guitar three nights per week in Larry Bellis’ dance orchestra at the Alexander Young hotel. Soon after, Harry Owens offered Freddie the chance to play electric steel with the dance orchestra of the Royal Hawaiian Hotel, Waikiki.

At the time, Freddie couldn’t actually play the instrument that he would become most closely associated with, but Freddie told Owens, “I could easily learn to play one”. Armed with the arrangements, it took Freddie less than two weeks to learn all the steel guitar parts.

Freddie stayed with The Royal Hawaiians for 13 years, playing prestigious venues all over America and recording for Decca, Columbia and Capitol Records. He was clearly keen on electric instruments from the beginning, starting with a Rickenbacker ‘frying pan’ and graduating to a six-string black and white Bakelite Rickenbacker steel as soon as the model was released in July 1935. Freddie’s was the third one made and he played through amplifiers that he built himself.

Having grown tired of life as an itinerant musician, Freddie relocated his family to Anaheim, California in 1942. Seeking session work, Freddie’s excellent sight reading ability and professionalism soon made him an in-demand player amongst movie score arrangers and record producers. Freddie also did a lot of radio and TV work.

In 1949, Freddie joined Wade Ray and his Ozark Mountain Boys on steel guitar, and began playing regularly at a club in Los Angeles called Cowtown. Over the next few years Freddie would write all the group’s arrangements, build their amplifiers and even figure out a way to amplify Ray’s violin. This facility with electronics led to a meeting with Leo Fender.

By 1953 the Fender factory was running at full capacity and Leo Fender was getting a bit burned out. He needed an assistant, preferably a professional musician, who could provide technical feedback from a player’s perspective. In March 1953, a mutual friend called Noel Boggs introduced the two men at Cowtown.

Freddie clearly wasn’t a fan of Fender amps and after the show he spent some time telling Leo what he thought was wrong with them. Rather than take offence, Leo took a screwdriver out of his infamous leather pocket pouch and opened up Freddie’s home-built amp on stage to check out how he had put it together. Leo was sufficiently impressed to offer Freddie a job as his assistant engineer.

Although Freddie was hired for his electronics expertise, at that time the Fender company was primarily focused on designing a new guitar to accompany the Telecaster. On Freddie’s second day at Fender he began his “first real project… to put the Stratocaster on the drawing board”. Working with Leo, Bill Carson and guitarist Rex Gallion, Freddie helped to refine and finalise the shape and contours of the Stratocaster body. However, it is widely accepted that Freddie’s most significant contribution to the Strat was his involvement with the design of the vibrato system. 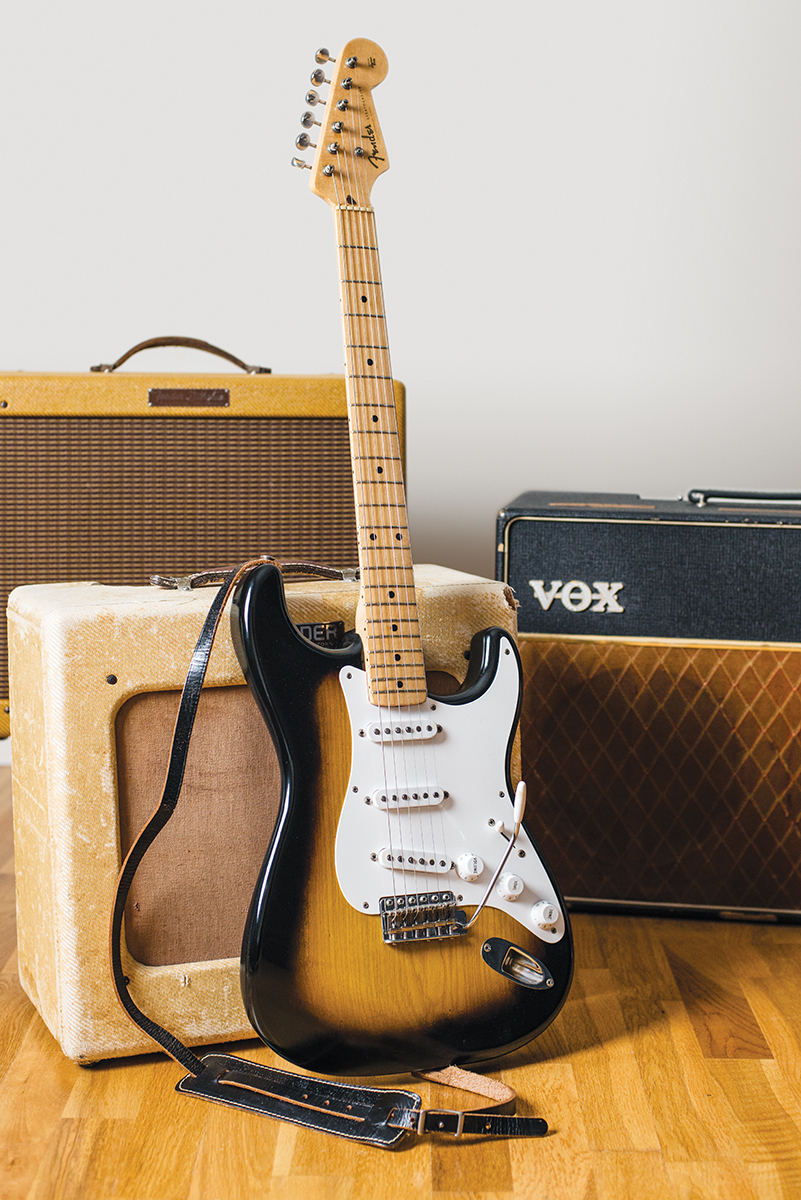 Leo’s first design attempt was much closer to the vibrato that ended up on the Jazzmaster and Jaguar. Although it functioned pretty well, its roller bridge saddles reduced sustain and it had the tonal qualities of a banjo. Having already spent six months on development and $5,000 on tooling, this must have been a bitter pill for Leo, but the forthright Freddie talked him around.

Freddie realised that the bridge needed more mass, and he also advocated an integrated design based on a mechanical gram scale rather than one with a separate bridge. Freddie’s redesign was so effective, it has remained a feature of Stratocasters ever since, and the basic design principle was adopted for all the locking trems that came after.

For Freddie, it was a flying start and he went on to play a significant part in the development of the Jazzmaster, Jaguar, Jazz Bass and Bass VI. Despite Leo reverting to his original vibrato design for the Jazzmaster, it seems that model was the design Freddie liked best because he retained one from the first batch of three prototypes as his personal guitar.

Freddie was also heavily involved in amplifier design while at Fender, and was pivotal in the development of the 4×10 Bassman – arguably the most iconic and influential of all Fender amplifiers. Having helped to create the quintessential American rock amp, it’s ironic that Freddie disapproved of overdrive. In fact, it’s probably what bugged him most about TV front tweeds back in 1953.

His son, Terry Tavares, recalls Freddie complaining, “I’ve put my integrity and heart into the design of Fender amps, and they produce crystal-clear sound. These snot-nosed three-chord wonders now want them to sound like $39.95 Sears catalogue amps. One of these days I’m going to design a 10,000-watt amp and not tell them. When they turn the volume up to max and play their first chord, poof, they’ll just disappear.”

Freddie said that “all of the guitars were essentially Leo’s design”, and this natural self-effacement tallies with Dan Smith’s recollection of Freddie as “the most humble man I have ever known”. It’s probably fair to say he didn’t always get the credit or recognition he deserved, but Smith also described him as “outgoing by nature, funny and entertaining, articulate to a fault, continually in search of knowledge and unbelievably caring.” Others who worked closely with Freddie certainly did recognise his contribution to Fender’s history. John Page, who once headed up Fender’s Custom Shop, got his big break when Freddie recruited him as a design assistant in 1978.

“What a freakin’ honour, 23 years old and I was made a guitar designer at Fender working side-by-side with Freddie Tavares. Freddie became like a father to me. He even called me his third son. He taught me the ins and outs of guitar design, told lots of historical stories, made me take vitamins, and told lots and lots of really bad, old jokes. He would even do one-arm pushups when artists stopped by just to show them how spry he was. I loved him. What a great man”.

Guitarist and Fender executive Bill Carson, who was one of Leo Fender’s trusted consultants, said it all: “In my opinion, he was the greatest man in both musical talent and personal integrity that I ever worked with”. Even so, by the early 1980s, the management had stopped listening to Freddie, and some within the company regarded him as little more than a symbolic figurehead.

Freddie stayed musically active throughout his career, keeping up the session work, recording movie soundtracks and playing with his brother Eddie in The South Sea Islanders. He was also a founder and long-serving treasurer of the Polynesian Society in California. Following his retirement in 1985 Freddie stepped up his gigging schedule, playing mostly for older people in nursing and retirement homes. It’s doubtful that any of them would have known that their entertainment was being provided by an inductee of the Fender Hall of Fame and the Steel Guitar Hall of Fame.

Referring to his mixed lineage, Freddie would proudly remark that, “the Portuguese makes me stubborn; Chinese makes me smart; English makes me high-class; Hawaiian gives me the music; Tahitian gives me the beat – I couldn’t ask for more.” Freddie died in Anaheim, California on 24 July 1990 at the age of 77 and he is buried in Nuuanu cemetery on Oahu.