Vintage PAF humbuckers may get all the plaudits, but many tone experts consider the P-90 to be Gibson’s greatest ever pickup.

Gibson didn’t come up with the P-90 out of thin air. Although undisputedly the company’s greatest single coil, the P-90 was actually part of a design process that began during the 1930s and (arguably) culminated in the fabled PAF of 1957.

Jazz guitarist Charlie Christian played a huge part in popularising electric guitars, and his name has even become synonymous with the pickup that was fitted to his 1930s Gibson ES-150 guitars. The pickup was gigantic, with a straight blade and two cobalt steel magnets. Its cumbersome mounting mechanism required three holes to be drilled through the front of the guitar.

The magnets had to be huge because the steel Gibson used had relatively low gauss, so the whole assembly weighed two pounds. The 1930s saw the development of alnico. This alloy of aluminium, nickel and cobalt could be used to make very powerful permanent magnets. Equivalent magnetic strength could be achieved with much smaller components, which had a profound effect on pickup and speaker design.

By 1940, Gibson had started fitting a new style of pickup to its ES-100, ES-125 and ES-150 guitars, as well as lap steels. Designed by Walt Fuller with alnico magnets, everything was housed under a compact rectangular metal cover with a height adjustment/mounting screw at each end. Some even had adjustable exposed polepieces, and all three versions of this pickup are known as the P-13.

Wound with 38-gauge wire, many Charlie Christian units have a DC resistance below 2.5K. Early P-13 pickups tend to be 6.5K or above, which suggests Gibson graduated to thinner magnet wire. These P-13s were later fitted to some Harmony and Silvertone guitars, and they sound fantastic.

After the bombing of Pearl Harbor, the US joined World War Two and pickup development, along with guitar manufacturing, was put on hold as the Gibson factory helped with the war effort. Straight after the war, Gibson was back in the guitar business, and the Walt Fuller-designed P-90 made its debut in 1946. 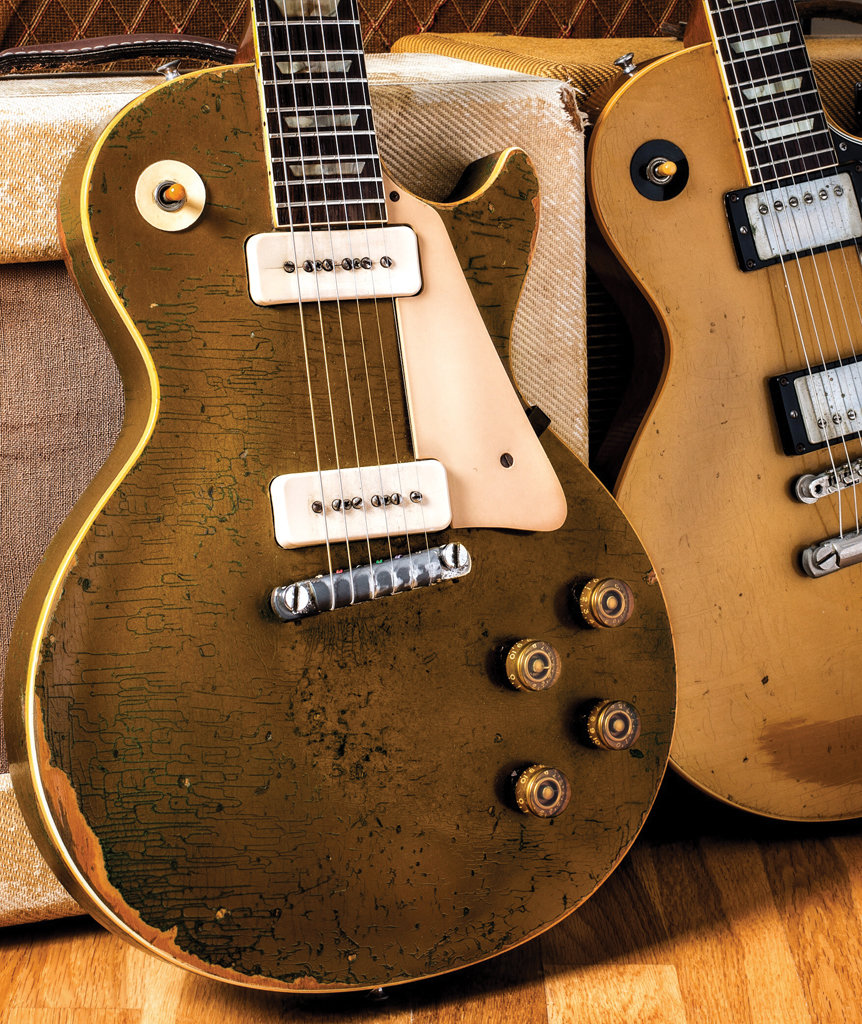 Gibson’s marketing had made a big deal of the P-13’s adjustable polepieces, so it’s unsurprising that feature was carried over to the P-90. A coil of 42 AWG plain enamel magnet wire was machine wound onto a plastic bobbin. The coil shape was shorter but significantly wider than the coils seen on the Strat and Tele pickups that followed. Like early PAFs, P-90 coils were wrapped with insulating tape and they were not wax potted.

Two sand-cast alnico magnets were placed below the bobbin, separated by a metal spacer (keeper), with both south (or sometimes north) poles facing towards the polepieces. The magnetic field flows through the centre of the coil and back around to the outer edges of the magnets.

Alnico III magnets were used until around 1957, when Gibson changed to alnico V. Interestingly, since the magnets oppose each other, some push apart over time. This misalignment refocuses the magnetic field, and some believe it can affect tone.

Gibson used braided single-core output wire that was soldered to the two-coil output wires on the underside of the metal baseplate. The baseplate had protruding extensions on those P-90s destined for Les Paul Juniors and hollow-bodied models. The vacuum formed plastic covers extended over the extensions, and this P-90 style was nicknamed the dogear.

P-90s for the Les Paul Standard, Custom or Special had screw holes in between the A and D string pole pieces on one side and the G and B on the other. The fixing screws went straight into the body, and these P-90s became known as soapbars because the rectangular covers look like bars of soap.

There are two other variations on the P-90 theme. P-90s with non-adjustable alnico rod magnets were also made around 1946 and fitted to some ES-125s. Described by Gibson as “lost for a lot of years”, this version was recently resurrected as the P-90ST and P-90SR for the Melody Maker.

The ‘staple’ P-90 was far more significant and has something of a cult following. Permanent magnets with a rectangular cross-section were used instead of magnets under the baseplate. The height of each of these polepieces could be adjusted individually using a small screw. In fact, the design is almost identical to that of the DeArmonds being used by Gretsch during that era.

There is an interesting, unsubstantiated story that Les Paul preferred the DeArmond’s clarity and response to the P-90’s, and Gibson was in the awkward position of having its main endorser using another company’s pickups. Accordingly, the ‘staple’ was designed hastily to get the DeArmond tone from a Gibson-branded pickup.

They were fitted to high-end jazz models as well as pre-1957 Les Paul Customs – often in the neck position, with a regular P-90 in the bridge. Paul himself played Black Beauties back in the early 50s, so you can draw your own conclusions on the matter. 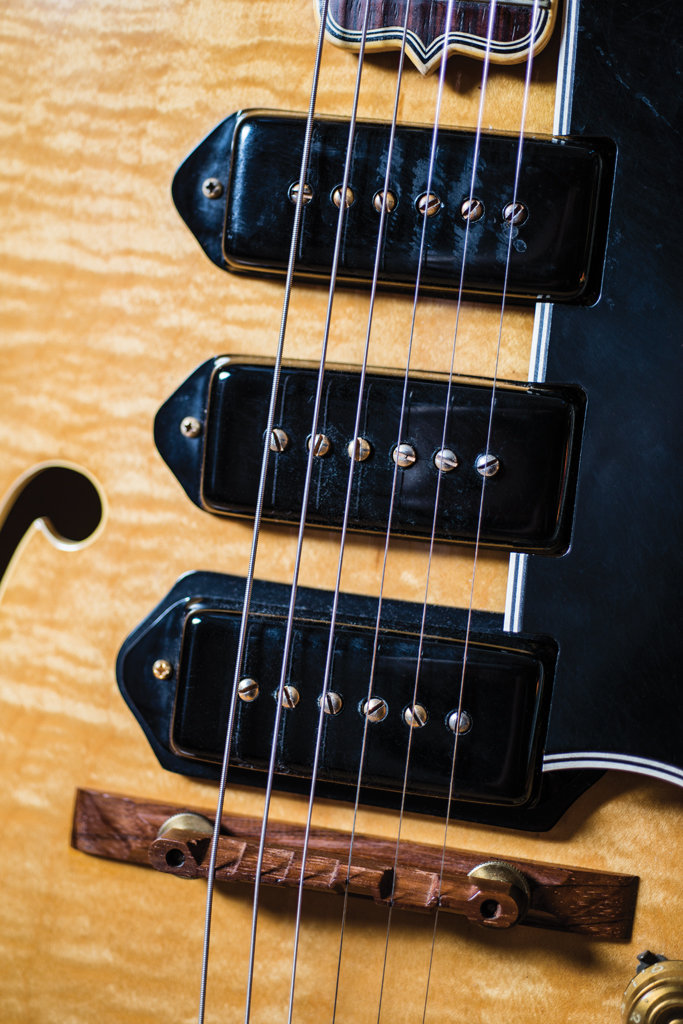 The DC resistance of vintage P-90s varies between 6.5K and 8.5K, with most somewhere in between. They were nominally hotter than P-13s and Charlie Christians. However, inductance readings provide a more reliable indication of output level and tone than DC resistance.

Inductance accounts for wire gauge and magnetic strength, and therefore represents the system as a whole rather than a single element in isolation. Jason Lollar describes inductance as “a measure of the physical property to induce a current”, and pickups are – after all – current generators. Generally speaking, higher inductance equates to more output and increased low end.

Vintage-spec Strat pickups usually have an inductance of around 2.25 Henries and PAFs read around 4.25 Henries. Charlie Christians were generally around three Henries and vintage P-90s were closer to six Henries. Compare these readings with hot humbuckers, which can have inductance readings of eight Henries or more.

Stronger alnico magnets tend to increase a pickup’s inductance, so the later alnico V P-90s are considered to have a more aggressive, snarly and powerful tone than the earlier alnico III versions. You may associate the alnico V with the hot blues of Freddie King or the punk grind of Johnny Thunders and Mick Jones.

The alnico III may be more closely equated to 50s jazzbox tones or the early rock ’n’ roll stylings of Scotty Moore. The earlier pickups sound brighter, softer and sweeter with lower output. Even so, if someone asks what P-90s sound like, you’d have to say much depends on the guitar they’re mounted in and the amp you’re playing through.

That’s the essence of what makes the P-90 perhaps the finest all-round pickup ever created. The basic sonic signature is strong mids, full bass and harmonically complex trebles. They can sound woody and mellow or they can be utterly brutal. And you can use them for jazz, blues, country, rockabilly, punk, heavy rock and metal.

From 1946 until 1957, the P-90 reigned supreme as Gibson’s premier pickup. Although it may have occupied the throne ever since, there are still many guitarists who consider the PAF as the ‘young pretender’.

Walt Fuller’s enduring triumph was the creation of a pickup that combined a wide frequency range, superb clarity and player-friendly dynamics with high output. What’s more, it’s equally effective on solid- and hollow-bodied guitars, and it delivers the goods in any musical genre. No other pickup ticks all those boxes quite as effectively as the P-90.

Check out our picks of the best P-90 for the job here.