An often under-appreciated element of every electric guitarist’s tone, the humble speaker is a vital component that colours and shapes the sound emerging from our amps. 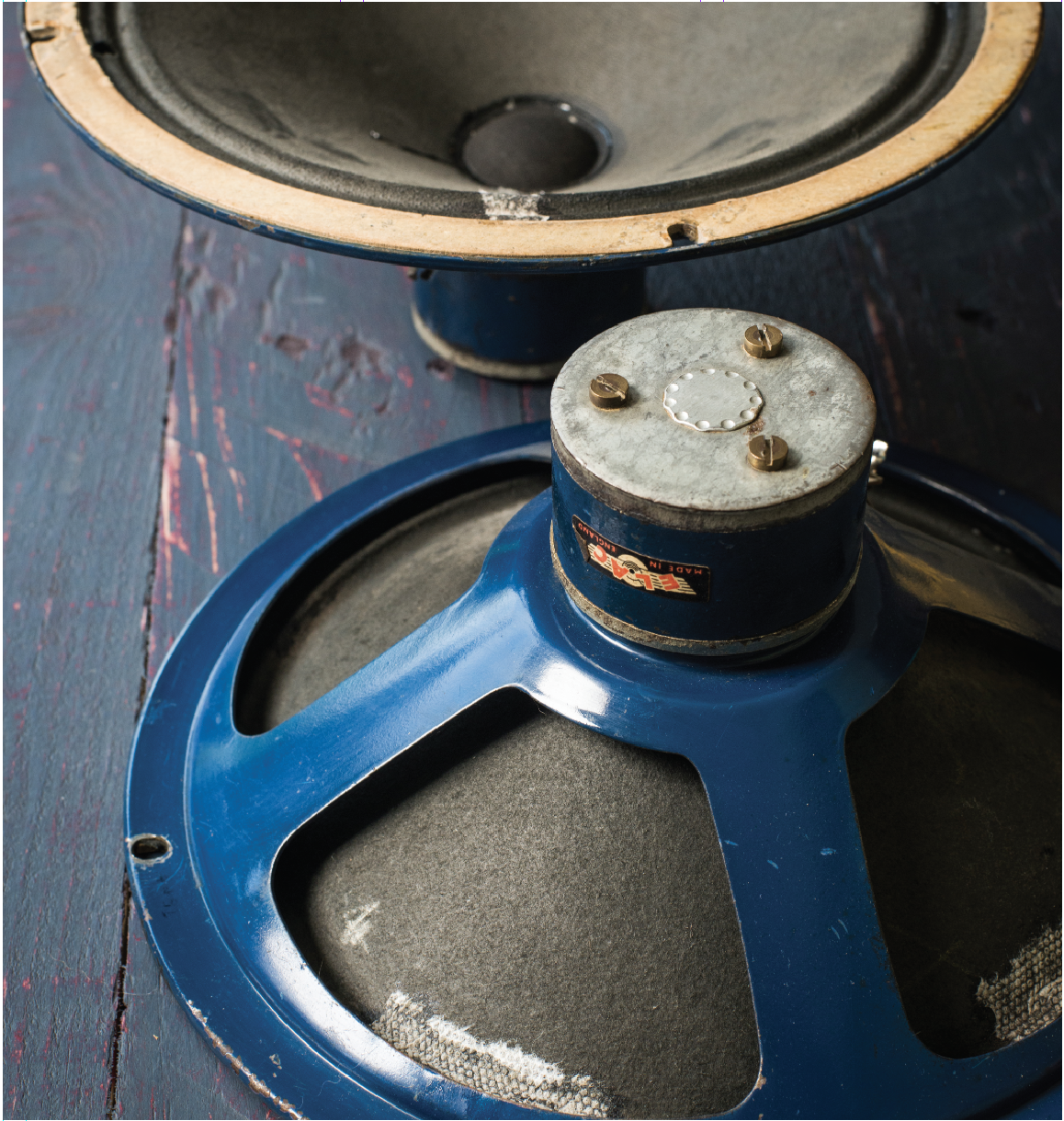 There is a world of difference between speakers intended for hi-fi or studio monitoring and those used in guitar amps. Flat and full-frequency response is undesirable for electric guitars and, instead, guitar speakers work best when colouring an amplifier’s tone and dynamic response. Consequently, they come in various sizes and configurations – and understanding the variables is crucial.

How speakers work
Under string vibration, acoustic guitar tops move backwards and forwards to create sound waves through compression and rarefaction. A speaker cone performs exactly the same function in pretty much the same way, but it’s set in motion electronically rather than mechanically.

As passive devices, speakers have relatively few components, and you can refer to the diagram to identify the parts and see how they fit together.

The top plate and the core are in physical contact with the magnet, so there’s a strong magnetic field across the gap between them. The coil former and the wire coil ‘float’ in this gap without making physical contact, and this assembly is called the motor.

The amplifier output is connected directly to the wire coil. When current from the amp flows in the coil it becomes an electromagnet and its magnetic polarity flips as the current alternates. The actual magnet’s polarity is fixed, so it alternately attracts and repels the coil, causing the floating coil assembly to move back and forth. Since it’s glued to the cone, the cone moves too – and that produces sound waves.

Sensitivity (SPL)
I was in a band with a guitarist who used a Marshall head and 2×12 cab, but my old Vox AC30 with two original Celestion Blue speakers was considerably louder. Although the Marshall was the more powerful amp, the Blues had higher sensitivity than the speakers in the Marshall cab.

Sensitivity is measured by feeding the speaker one watt and measuring the sound pressure level (SPL) at a distance of one metre. Guitar speakers typically measure somewhere between 93dB and 103dB, with 103dB being the most sensitive.

The G12 Greenbacks in the Marshall cab had a sensitivity of 97dB compared to the 100dB Blues. It might not seem like a lot, but every 3dB increase in sensitivity is equivalent to doubling an amp’s power. The factors that determine sensitivity are the mass of the cone, voice coil and former, plus the length of the coil and strength of the magnet. Low mass and strong magnets should result in high sensitivity.

If you’re struggling to hear yourself over the drummer with a medium-powered amp, or you just want some more clean headroom, try installing a more efficient speaker. Conversely, less efficient speakers may allow you to crank up an amp that might otherwise be too loud.

When pushed hard, guitar speakers can start to compress and add a gritty distortion that suits certain styles. Some speakers also lose cohesion in the low-frequency range, which is another characteristic that divides opinion. A heavier and stiffer cone, combined with increased damping and a wider-voiced coil, will enable a speaker to handle more power. However, the downside can be a tone that’s bland and colourless, and feels stiff to play – plus lower sensitivity.

While pushing guitar speakers beyond their recommended capabilities can produce pleasing results, it’s risky and sooner or later you may end up blowing the speaker. This is a blanket term for a variety of unpleasant symptoms. You may notice that even at low volume the speaker sounds grainy, scratchy or distorted. If the cone has been forced to travel beyond its limits, the cone can split, which results in fuzzy distortion – or classic Kinks guitar tones according to legend.

Prolonged overheating can cause the material fixing the coil in position to break down and the coil to unravel. With such a tight gap, the coil can rub against the edges, which produces more undesirable sounds. 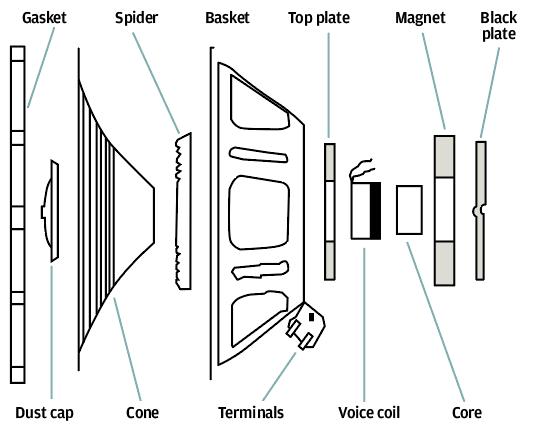 The worst case scenario is a coil that has overheated and burned out. When this happens you’ll get no sound at all and you should turn off your amp immediately or you may end up blowing that too.

If you suspect a blown coil, set a multimeter to its lowest resistance setting and look for a reading across the speaker terminals that more or less matches the given speaker impedance. Alternatively, touch the terminals of a nine-volt battery against the speaker terminals. If you can’t get a resistance reading – or a popping sound from the battery – you can reasonably conclude that your speaker is toast. Your options are to have it re-coned or replaced.

Impedance
The voice coil is basically a wire-wound resistor, so all speakers have a load impedance rating given in ohms. The figure is nominal since the coil’s resistance is not constant across the frequency range. The same model of speaker with different impedance ratings will have voice coil variations in inductance and mass. According to Celestion’s Ian White, 16-ohm versions are typically brighter than their 8-ohm counterparts.

The amp will also run cooler and cleaner, so an improvement in tone doesn’t necessarily accompany the drop in power. Connect the same amp to a 2-ohm speaker and it will attempt to run at 200 watts before possibly burning itself out.

Like resistors, speakers can be combined in series or parallel. Two 8-ohm speakers in series present a 16-ohm load to the amp. Two 8-ohm resistors in parallel present a 4-ohm load. The rule is that you can go higher than the specified rating – if you have to – but you must not go lower.

Resonance
Speaker cones are not unlike drum skins, and they have a natural resonance frequency that plays a large part in voicing the speaker. Bass speakers will have a lower resonant frequency, and guitarists such as Paul Kossoff preferred them for a warmer and more rounded tone. Some drop-tuned metal players also prefer a lower resonant frequency. A light and loose cone suits players who like rootsy and retro tones because they tend to be more dynamically responsive and you’ll hear more harmonic overtones. However, when pushed hard the bass can sound blurry and indistinct and the upper frequencies may get harsh.

Manufacturers typically coat the corrugated edges of the cone with a silicon substance to control response by limiting cone excursion. This process is called doping and, in addition to tightening the bass, it minimises odd mechanically generated harmonic overtones called edge yowl or cone cry.

Doping reduces the resonance peak at the upper cut-off frequency for less chime and complexity, but also means less likelihood of harshness. Doped speakers are popular with rock players who prefer high gain and high volume. When buying speakers, consider the resonant frequency and the amount of doping to determine which ones will suit your needs.

Incidentally, the term ‘breaking in’ a speaker actually refers to loosening up the edge for slightly deeper lows, smoother treble and a more dynamic feel. You can accelerate the process by playing music through the speaker or using a noise generator; but simply playing through it works fine, too.

Cones
Almost all guitar speaker cones are made from paper pulp, but that doesn’t mean they all look and sound the same. Ever-increasing power, and a tendency for guitarists to overdrive their amps, forced speaker manufacturers to stiffen their cones as well as their edges.

These days, most cones are ribbed for increased stiffness without increased weight. This reduces speaker breakup and prevents the cone from warping, so it’s all good right? Well, not entirely. Lots of early guitar speakers had smooth cones, and now that low-power amps are so popular, their limitations are not necessarily an issue. Consequently, some players have discovered that the smooth cones of early Jensens, ELACs and so forth provide interesting sonic characteristics.

Modern manufacturers, such as Warehouse, are now offering smooth cone options for players who are into early-40s and early-50s electric jazz and Chicago blues. Warehouse describes the smooth cone tone as “more vintage, woody, smoky and organic”. You’ll also get a bit less treble and quicker breakup.

Magnets
Three types of magnets are used in guitar speakers. From the early 50s, most had alnico magnets, but as the cost of the cobalt used in the alloy sky-rocketed, manufacturers moved to ceramic magnets. The latest neodymium magnets offer the highest magnetic strength-to-weight ratio.

Ascribing sonic characteristics to magnetic materials is problematic because so much depends on other elements, such as doping and cone design, as previously discussed. For instance, the Jensen P12R and Celestion Blue both have alnico magnets and are even a similar colour, yet they sound totally different.

With that caveat, I would associate alnico speakers with chiming harmonically complex highs and soft bass. Ceramic speakers often have tighter and quicker lows, coupled with more upper-midrange bite and punch, but rolled off highs. Neodymium combines elements of alnico and ceramic.