All About… Stratocaster Pickups

Despite their relatively simple design, Fender’s original Stratocaster pickups are still revered for their ‘vintage’ sonic properties. We explore their timeless magnetic attraction for guitar players.

George Fullerton recalled that  Fender built several types of pickup for Bill Carson to test out in the Stratocaster prototype and the ones that made it into production were those Carson thought “had the most hair on their chest”. Carson also wanted four or five pickups on the Strat, but, fortunately, Leo had the good sense to veto that suggestion.

Compared to Filter’Trons, PAFs, P-90s and even Telecaster pickups, Fender’s design for the Stratocaster’s pickups was by far the simplest. They’re about as stripped back as pickups can be – the only parts involved are two ‘flats’, six magnetic slugs and some magnet wire.

Given that there are so few variables, it’s interesting to ponder why the tone of Stratocaster pickups varies so dramatically. Breaking one down into its individual components and examining manufacturing inconsistencies may provide some of the clues.

Vulcanised fibreboard, aka Forbon and ‘fish paper’, was Fender’s default substrate material for circuit boards and pickup flats. Since the magnetic slugs were of a consistent diameter, holes were made in both the top and bottom flat that were tight enough to hold position on the slugs through friction alone.

Initially, the fibreboard was black, but this changed to grey around March of 1964. Later in the 1970s, the grey got darker. It’s very unlikely that the flats have any influence on tone, but the colour can be helpful when determining the age and provenance of vintage pickups.

I have never seen a pencil date on the base of a pre-CBS Strat pickup with black flat work. Fender started using a yellow date stamp when the grey bottoms appeared; however, this changed to a handwritten date around 1966 and, by the late-60s, Fender was using a black date stamp.

The height-adjustment screws were threaded into extended ears on the bottom flat. Vulcanised fibreboard is pretty tough, but occasionally, the threads strip out and the screws won’t hold. If you grind up some fibreboard with sandpaper, you can mix it with Super Glue, fill the screw holes then re-drill. No guarantees, but it has worked for me. 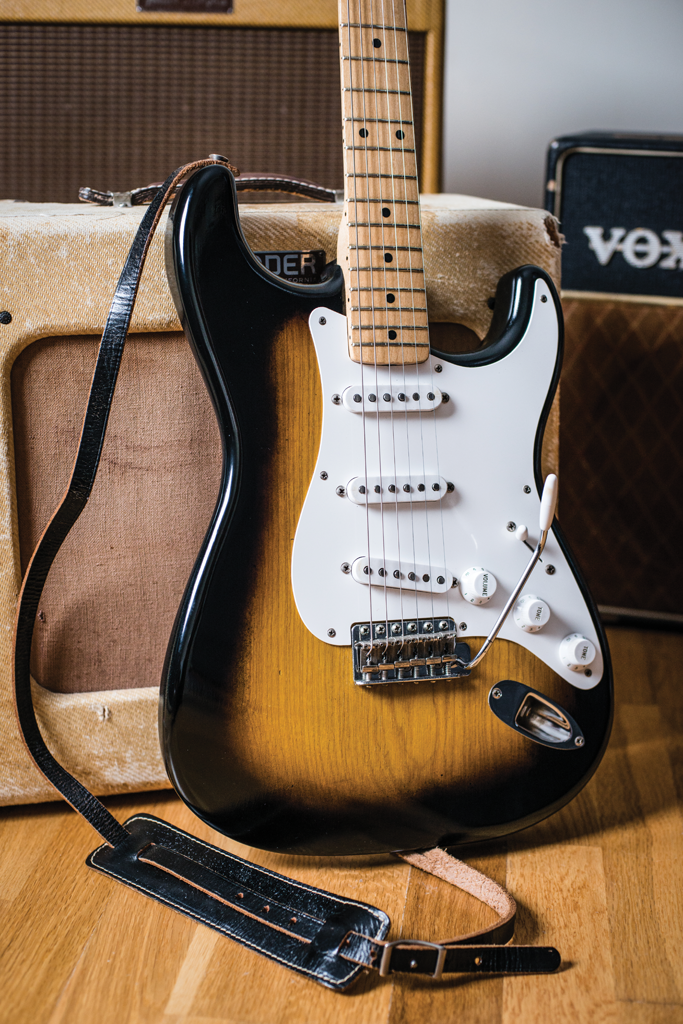 Until 1954, Telecaster bridge and neck pickups had slugs that were flush with the top flat, but Fender took a different approach for the Stratocaster. Presumably, this was an attempt to achieve better string-to-string balance – or at least appear to be doing so. Remember, Fender was competing against the DeArmond Dynasonic and the Gibson P-90 at the time, both of which had individually adjustable polepieces.

Fender’s initial Strat stagger had the D slug higher than the G slug. This soon changed as players began using plain G strings and the G slug came up to more or less the same level as the D slug. This is the stagger we’re most familiar with today, but consider that it was designed for the vintage-style 7.25-inch string radius. These days, a 9.5-inch radius is common even on vintage-style instruments, but pickup winders persist with the vintage stagger nevertheless.

The ’54 slugs also had a 0.2-inch diameter, which was wider than the later 0.192-inch slugs. According to Tim Mills of Bare Knuckle Pickups, the slug diameter narrowed once again in 1963. This coincided with the veneer fingerboards and the diameter became 0.187-inches. This resulted in “a more focused magnetic field under the string and subsequently a brighter, tighter tone compared to the rounder bottom end of the earlier 50s coils”.

The magnetic alloy also changed from alnico III on the very earliest ’54 Strats to alnico V from 1955 onwards. Alnico V continued to be used throughout the vintage era, but around 1974, Fender stopped using staggered slugs. Fender also flipped the polarity in 1959 to 1960, from north up to south up.

The early slugs also had hand-bevelled edges and it is generally assumed this was done to disguise the rough and uneven surface left by the sand casting. Later, Fender stopped bevelling and, according to Seymour Duncan, this had an effect on the magnetic field, as he explains: “The bevel causes the magnetic field to shoot out a little around the bevel area, but it results in a tapering of the field above that point. So, if you could, imagine the magnetic field shaped like the flame of a candle or a teardrop.”

Magnet wire with two types of insulation coatings – heavy formvar and plain enamel – was used during the vintage era. The 42 gauge stayed consistent throughout, with the change to plain enamel occurring in 1964.

The number of turns varied considerably. Since everything was done by hand, there was much variation, but the general trend was towards hotter windings from a 5.7K average in 1954 to 6.4K in 1963. Interestingly, Fender cooled down the coils in ’59 – so if Stevie Ray Vaughan did indeed have 1959 pickups in his ’63 Strat, they were hardly the hot-wound coils of popular imagination.

If that’s what you’re after, Bare Knuckles’ Tim Mills notes that: “I’ve found the hottest Fender coils appear from ’62 to ’64, with DC ranges of 5.6K right up to 6.5K-plus and never in any particular order. It’s not uncommon to find the hottest coil of three fitted in the neck slot.”

After plain enamel wire was adopted, Fender began using fewer winds, presumably in an attempt to cut costs. So the pickups of the early 70s sounded brighter and weaker than those of the early 60s.

The insulation layer doesn’t have a sound, but its thickness is a factor. Plain enamel provides a thinner coating than heavy formvar, so two coils with identical DC readings will have different dimensions. The formvar coil will be fatter and it will sound different as a result.

Take a look at a bunch of vintage and modern Strat pickups, and you will notice that the extent to which the slugs protrude beyond the plastic covers varies a great deal. Assuming the slugs are all the same length, this indicates that the gap between the two flats must vary.

Jason Lollar explains: “You can get quite a different tone out of a Strat pickup by making the coil a little bit shorter or a little bit taller. It makes a measurable difference. You can hear the difference in as little as a 32nd of an inch.” Generally, a wider coil will sound fatter and thicker, but the treble may be softened. A taller coil can sound clearer, brighter and more defined.

Hand-winding doesn’t mean actually winding coils by hand. It refers to the method of guiding the magnet wire onto the bobbin by hand, while machine-winding refers to automation of the wire guiding process. In both cases, machines are used to spin the bobbin.

Machine-wound pickups tend to be more consistent and they’re cheaper to manufacture, which is undoubtedly that’s why Fender ceased hand-winding pickups after the CBS takeover, when it also changed to plain enamel wire with fewer windings. It’s now generally accepted that hand-wound Strat pickups can have superior tone regardless of the insulation material.

When human hands are involved, there are two further variables to factor in – coil tension and winding style. Legendary Fender pickup winder Abigail Ybarra was considered to have such a knack for winding great-sounding pickups, she was coaxed back out of retirement to make pickups for the Fender Custom Shop.

‘Scatter winding’ is a hand-winding method in which the magnet wire is loaded onto the bobbins in a more uneven and randomised manner. The wire layers are not as tightly packed, which lowers the distributed capacitance of the pickup. This opens up the treble response and shifts up the resonant peak to achieve a clearer and brighter tone. 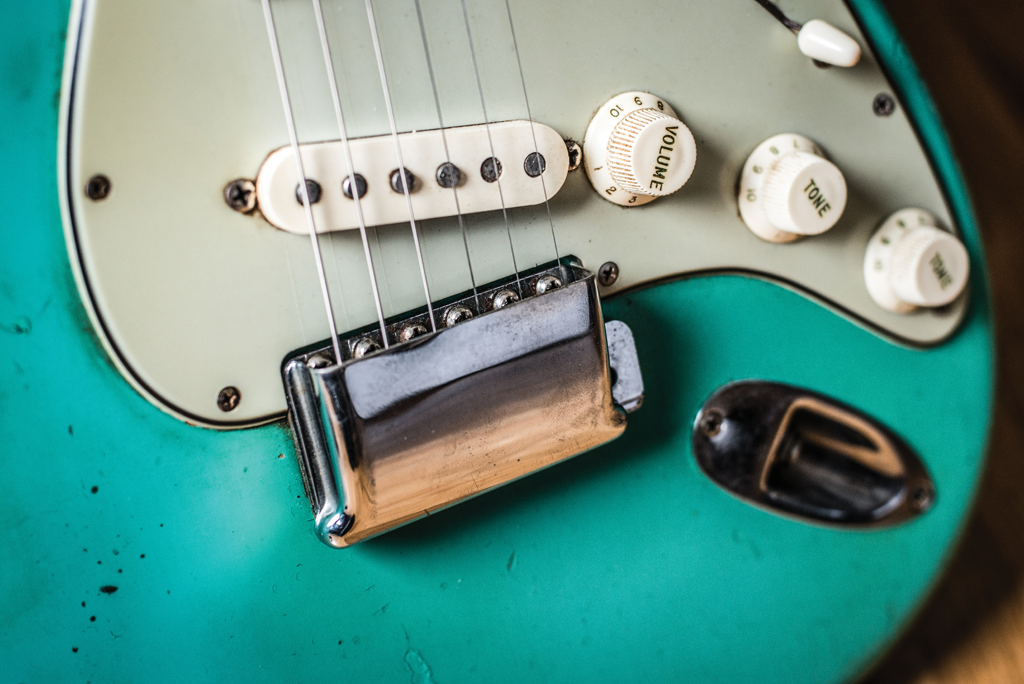 According to Jason Lollar, “the actual recipe for the metal has a huge impact on the tone. You can get an alnico V from one factory…and an alnico V from another factory, and there can be a huge difference in the sound.

“Then old Fender pickups… you’re going to find that the power of the magnet is about 20 per cent less than if you took that magnet, put it on the magnetiser and charged it back up”.

Pickup manufacturers often deliberately weaken magnets in an attempt to emulate vintage tone. Another approach is to use weaker grades, such as alnico IV rather than alnico V. Weaker magnets produce a softer treble response and exert less pull on the strings, so you may also notice a bit more sustain.

Potting refers to the practice of impregnating the coils with a substance that will solidify the magnet wire and prevent squealing. Fender has generally used wax, but some pickups were dipped in lacquer and set harder. Rock-solid coils can sound brittle and harsh.

Most potting discussions approach the subject in a binary way – potted or non-potted. This is an over-simplification, however, because skilled pickup makers will carefully control the potting process in order to achieve specific results.

If you play loud, or use high gain, you will probably benefit from having heavily potted pickups. Yet I’ve never encountered a really good-sounding pre-CBS Stratocaster pickup that wasn’t microphonic (tap the top with a plectrum and you should be able to hear it through the amp).

So, the ‘vintage tone secret’ is to pot the coil sufficiently to provide some squeal resistance, but not to over-pot and kill the chime, shimmer and airiness that only a degree of microphony can bring.

Check out our picks of the best Stratocaster single-coil pickups here.