All About… Telecaster  Neck Pickups

Compared to hallowed Stratocaster units, Tele neck pickups are often maligned, but if yours doesn’t cut it there are plenty of mods and upgrade options on the market. 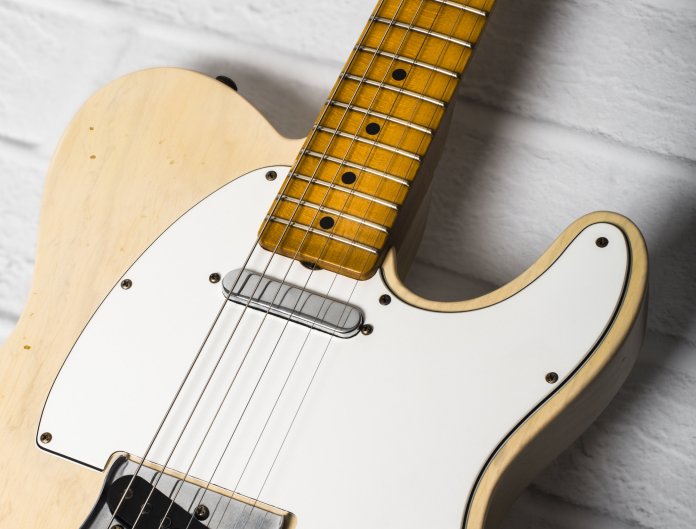 Some have argued that the Tele neck pickup was an afterthought. The single-pickup Esquire pre-dated the Broadcaster, and most of the prototypes that survive have only bridge pickups. This seems to indicate that the neck pickup was added late in the design process. Other guitars of the era had two pickups, so maybe Fender felt compelled to do the same.

Judging by the wide coil and the exposed slugs, the neck pickup on the famous red prototype looks more like a lap steel pickup than the unit Fender eventually designed for the Broadcaster. It probably sounded pretty fantastic. Instead, Fender came up with a much smaller pickup with a narrower coil and a plated metal cover.

It also decided to screw the pickup onto the body rather than suspend it from the pickguard,  as it subsequently did on the Stratocaster. The reasons for this were probably aesthetic rather than technical – much like the ‘ashtray’ bridge cover that concealed the bridge parts and the pickup.

Unlike the bridge pickup, Tele neck pickup specs remained fairly consistent. Since the dimensions were tight, Fender used thinner 43 AWG wire so it could get enough turns onto the bobbin. The magnets might have changed from alnico III to alnico V, but they were always flat rather than staggered. The change from wax potting to lacquer dipping occurred around 1967.

It’s probably fair to say that Tele neck pickups are not universally admired. Even hardcore Tele players occasionally express some ambivalence towards the tone upgrade, and many have felt compelled to replace them with other pickups.

Is there something fundamentally wrong with the Tele neck pickup’s voicing, or is it just a big misunderstanding? To answer that, we need to take a closer look at the way they’re made and how the components and wiring influence the sound.

Judged by its cover

Most of us will be aware of PAF lore, which holds that Gibson-style humbuckers sound different with their covers removed. The same is true for Tele neck pickups, where the cover also rolls back some of the treble response and perceived loudness.

In a sense, this compounds the issues caused by the Tele neck’s small and squat coil shape – namely woolly and soft tone. However, none of this would have been too much of an issue when you consider the way in which Fender’s original wiring scheme for the Tele was derived from the Esquire’s.

Although it had only one pickup, the Esquire had a three-way switch that provided three distinct sounds. Position one bypassed the tone control, position two re-engaged the tone control and position three activated a pre-set treble roll-off for a very dark sound. Fender referred to this as the ‘bass preset’, and it was designed for guitarists to emulate a bass tone in the years before the electric bass.

When the neck pickup was added, positions one and two selected the bridge and neck pickups respectively – both with the tone control engaged. Leo Fender was very fond of the ‘bass preset’, so it was retained in position three. In 1952, it became even bassier when Fender swapped over to a 0.1uF capacitor. The classic Tele tone with both pickups engaged wasn’t actually a stock feature.

Almost from the beginning, players rewired their Tele controls for neck/both/bridge with master volume and tone. Despite the circuit’s unpopularity, and the phenomenal success of the electric bass, Fender persisted with the original Tele control wiring until 1967.

The ‘Leo got it right the first time’ mantra would be more accurate and believable if it was qualified with a strategically inserted ‘sometimes’. Once players started hearing how great Stratocaster neck pickups sounded, it would have been easy enough for Fender to upgrade the Tele neck pickup and re-configure the controls. Although it would tinker around with minor stuff, Fender always seemed more focused on developing new models than optimising and upgrading old ones.

It’s certainly possible to get a really good sound out of a Tele neck pickup, but part of the issue lies in the tonal contrast between the neck and bridge. Typically, a Tele bridge pickup is as bright as the neck is dark, so if you dial in your amp to sound good with your bridge pickup, the neck will inevitably sound muffled. Set your amp for a clear and articulate neck pickup tone and the bridge pickup will almost certainly sound painfully bright. 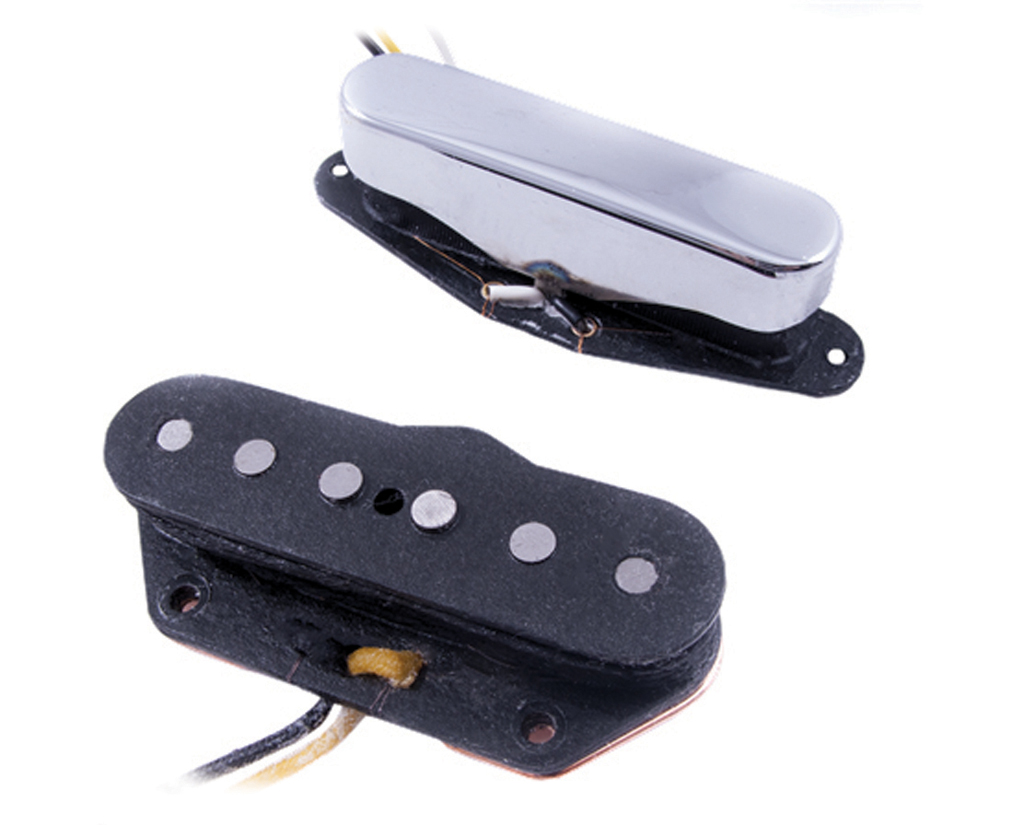 There are a couple of simple and free modifications that can bring out the best from a Tele neck pickup. Most people blame the cover for the lack of clarity, so you can improve things by snipping the little wire that connects the cover to ground. The difference won’t be dramatic but you should hear it. Unfortunately, you’ll get a slight buzzing sound if you inadvertently touch the cover.

The composition of the cover makes a difference, too. For minimum treble roll-off, it’s best to have a thin nickel silver cover. Thick brass covers are a bad idea,  unless dull is your thing – nickel silver replacements are available.

To really open out your tone, try removing the cover completely. Modern pickups may have tape wrapped around the coil for protection, but vintage-style pickups are likely to have exposed coils. If you do decide to go topless, so to speak, have a pickup repairer wrap an exposed coil to prevent damage.

The final thing to consider when ordering a new set of Tele pickups is combining alnico V slugs in the neck with alnico III in the bridge. You could also request 43 AWG wire for the bridge pickup, along with flat slugs for an even frequency response with fuller bass. Hang on… it seems Leo Fender did something right from the get-go after all.

Sticking your neck out 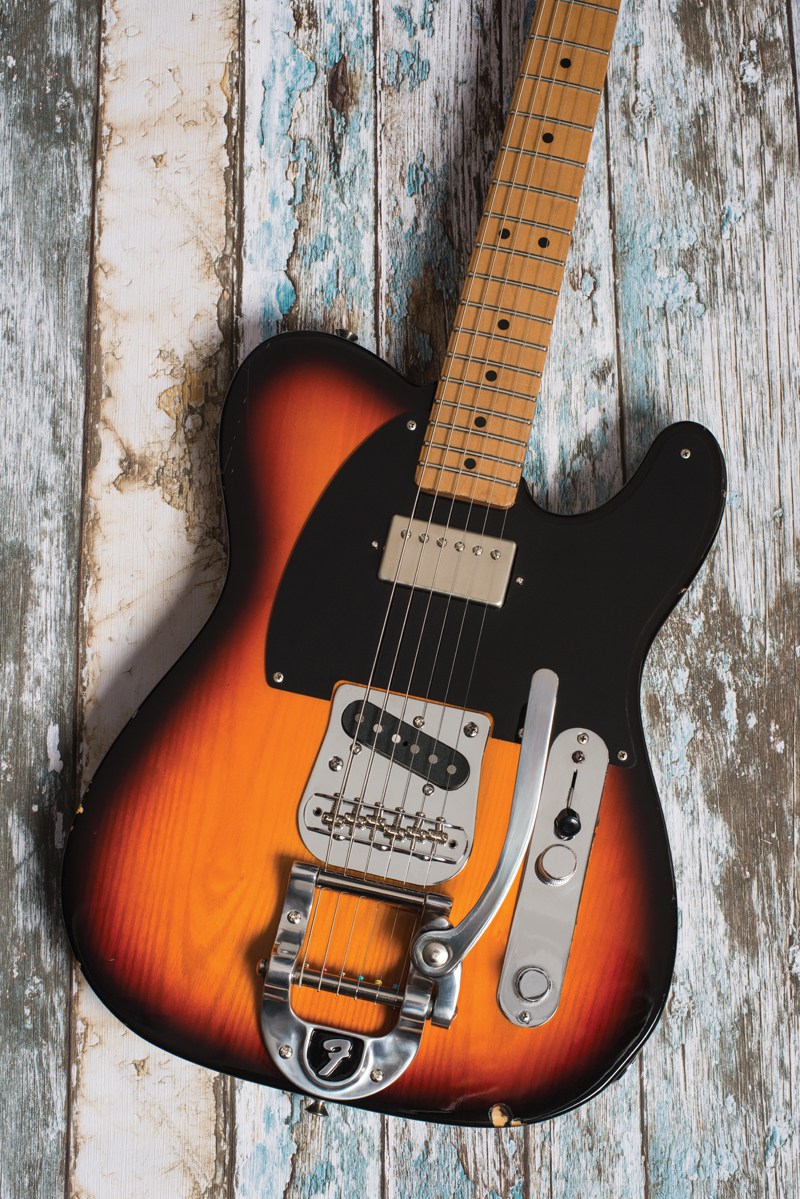 Players have always modified guitars, and swapping Tele neck pickups for something entirely different is perhaps the most common modification of all. Although Keith Richards’ humbuckered Micawber is the most famous example, Sinatra and Elvis guitarist Bob Bain is known to have installed a PAF in his ’53 Tele as early as 1957. It’s the guitar he played on Henry Mancini’s Peter Gunn theme.

In fact, it was such a popular mod that even Fender got in on the act. In 1972, the company launched the Telecaster Custom, including a Wide Range humbucker designed by Seth Lover, who also came up with the design for Gibson’s original PAF.

These days, Filter’Trons and Gold Foils are popular and P-90s also work a treat. There are even alternatives that are voiced to sound like P-90s, Charlie Christians and so forth that will drop in without the need for routing the body. The bottom line is that everything seems to work pretty well in the neck position of a Tele – including the original pickup. Ultimately, it’s just a matter of tonal taste.

Check out our picks of the best Telecaster neck pickups here.