The controlled burning of tonewoods may seem like a crazy notion, but some guitar manufacturers are touting it as a major advancement in guitar tone. So is torrefaction for real or simply half-baked? 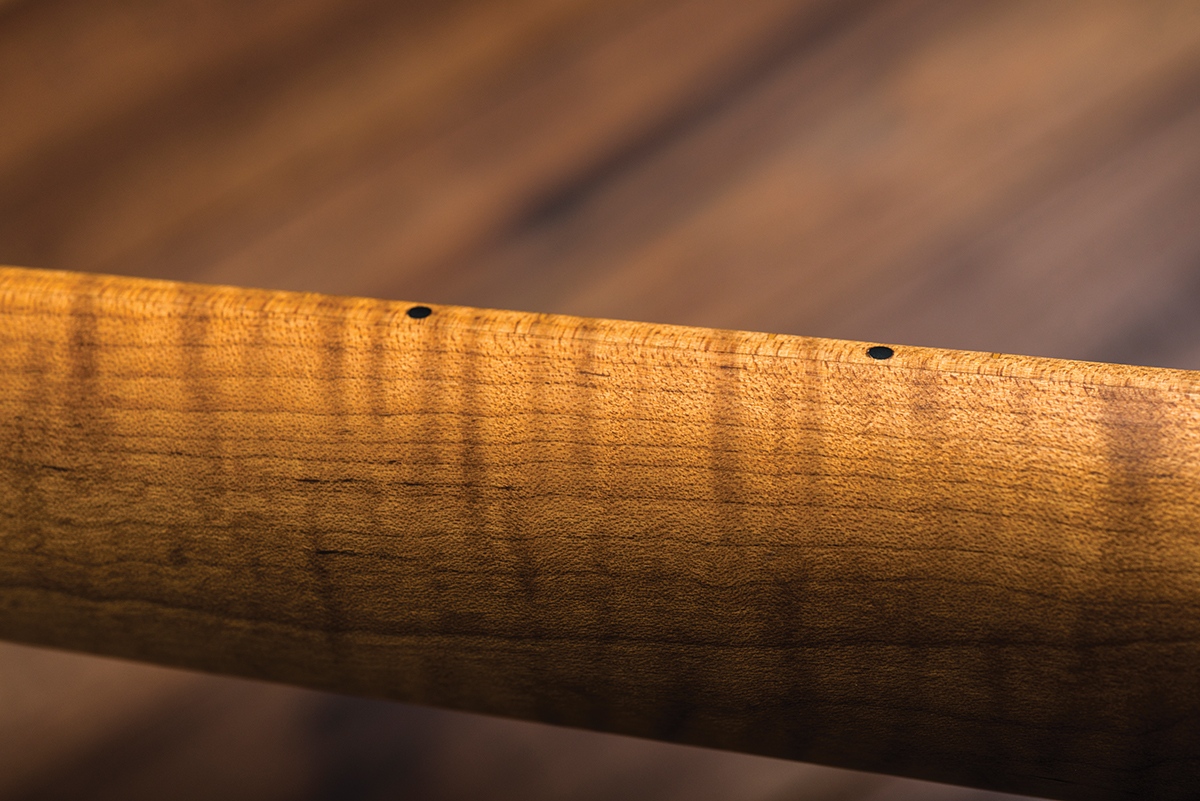 Many players are chasing vintage tone, but most of us would prefer not to pay vintage prices, and this has sparked a search for several ‘magic bullet’ solutions in the last few decades. The pachyderm in the parlour, however, is that for all the time and effort that goes into meticulously recreated pickups and parts, they are invariably screwed or glued onto instruments made from relatively fresh wood.

If we accept there is some truth in the belief that vintage instruments sound different to even the most exacting repros and reissues, it follows that the tonewood itself may be the determining factor. Most of the same woods that were used for pre-war Martin acoustics, 1950s Gibsons and 60s Fenders are still available and remain in common use. ‘Same wood but different tone’ suggests that wood changes as it ages.

This belief in the tonal superiority of old wood has led to some frankly regrettable ‘conversions’ of perfectly good vintage guitars. A more positive development has been the increased use of reclaimed timber. While this can be successful on a bespoke basis, reclaimed timber is not obtainable in sufficient quantities for high-volume guitar production.

Fortunately the aging process of wood is a long established field of scientific research that has been pursued well away from the myth-mongering of vintage guitar dealers and fondest fantasies of Les Paul enthusiasts. Now it seems that the missing piece of the vintage tone jigsaw may have been found.

The buzzwords you’ll doubtless have heard are torrefaction, roasting, tempering, caramelisation and rectification – but they all amount to the same thing. We’re talking about thermally treating tonewood to condense decades of aging into a matter of hours. The rationale is that if you can induce changes at a molecular level that make the physical properties of fresh tonewood more like its decades old equivalent, the tonal qualities will follow suit.

Although touted as the latest shortcut to vintage tone, torrefaction has been around since the Vikings invented the booze cruise. So what is it and why all the recent excitement

Burning Issues
Obviously tone wasn’t a big priority for Viking shipwrights. What they needed were strong seagoing vessels that would remain watertight. Even well-seasoned timber is susceptible to changes in temperature and humidity – especially when it’s frequently in and out of water.

The Vikings used torrefied wood because it absorbs less moisture so size and shape are more likely to remain consistent after it has been sawed and planed. In other words it’s stronger and more stable as well as being lighter, which means it’s equally well suited to shipbuilding, wooden flooring and guitar making.

Guitar manufacturers such as Rickenbacker have long been using heat-treated timber for this very reason – while making no claims of tonal superiority. In recent years, Gibson has utilised torrefied maple for some fingerboards as an alternative to rosewood.

The torrefaction process involves baking wood in an oxygen free environment at temperatures higher than conventional timber seasoning kilns. Taken to its logical conclusion you would end up with charcoal but stopped short, the wood merely darkens depending on how long it has been roasted.

This colour change occurs due to chemical reactions between the wood’s proteins and its natural sugars, and torrefied maple can range from soft amber to a deep reddish brown that is closer to cherry or even walnut. You can observe similar outcomes with spruce and the colour change permeates throughout the timber.

Growing Old Gracefully
Maine-based luthier Dana Bourgeois was among the first US luthiers to use torrefied timber. He told Reverb.com that freshly cut wood is mostly cellulose bound together with lignin and contains volatile elements including “pitches, sugars, oils, and… considerable water content”.

Regular timber seasoning reduces the water content but the goal is to ensure that any potential shrinking or warping takes place during the process, not once the guitar has been assembled. However, seasoning does not remove the volatile elements that supposedly dampen the resonance and slow down the wood’s transient response.

Bourgeois describes how, over the course of several decades, these volatiles eventually vacate the wood as they, “oxidise, gas off and mineralise. The slow chemical reaction emits a gas and leaves a mineral residue. The lignin also sets like glue, holding the cellulose together”. Once this has taken place, the timber should be lighter, stiffer and quicker to respond than when it was first used to build the guitar.

The Great Bake-off
Torrefying already seasoned wood speeds the process by cooking off the volatile contents of the timber and leaving behind the mineral residue. It also induces changes in the cellular structure that would otherwise take half a lifetime. Going from an open to closed cell structure prevents the wood from re-hydrating. In other words once it’s dry, it will stay dry.

Contrast this with seasoned wood that is dried to the point where the water vapour pressure in the wood and the surrounding ambient space are more or less equal. This is called ‘the equilibrium moisture content’ but since the wood remains hygroscopic, it can continue to release and absorb moisture depending on what the atmospheric conditions are.

When acoustic guitars dry out, the wood wants to shrink but the glue joints will try to hold firm. This is why cracks and splits can appear and it’s very common to see the evidence on old acoustics. Consequently we’re advised to keep all-solid guitars hydrated, but while this may help to prevent cracks from occurring, it also inhibits the ageing process described by Bourgeois. 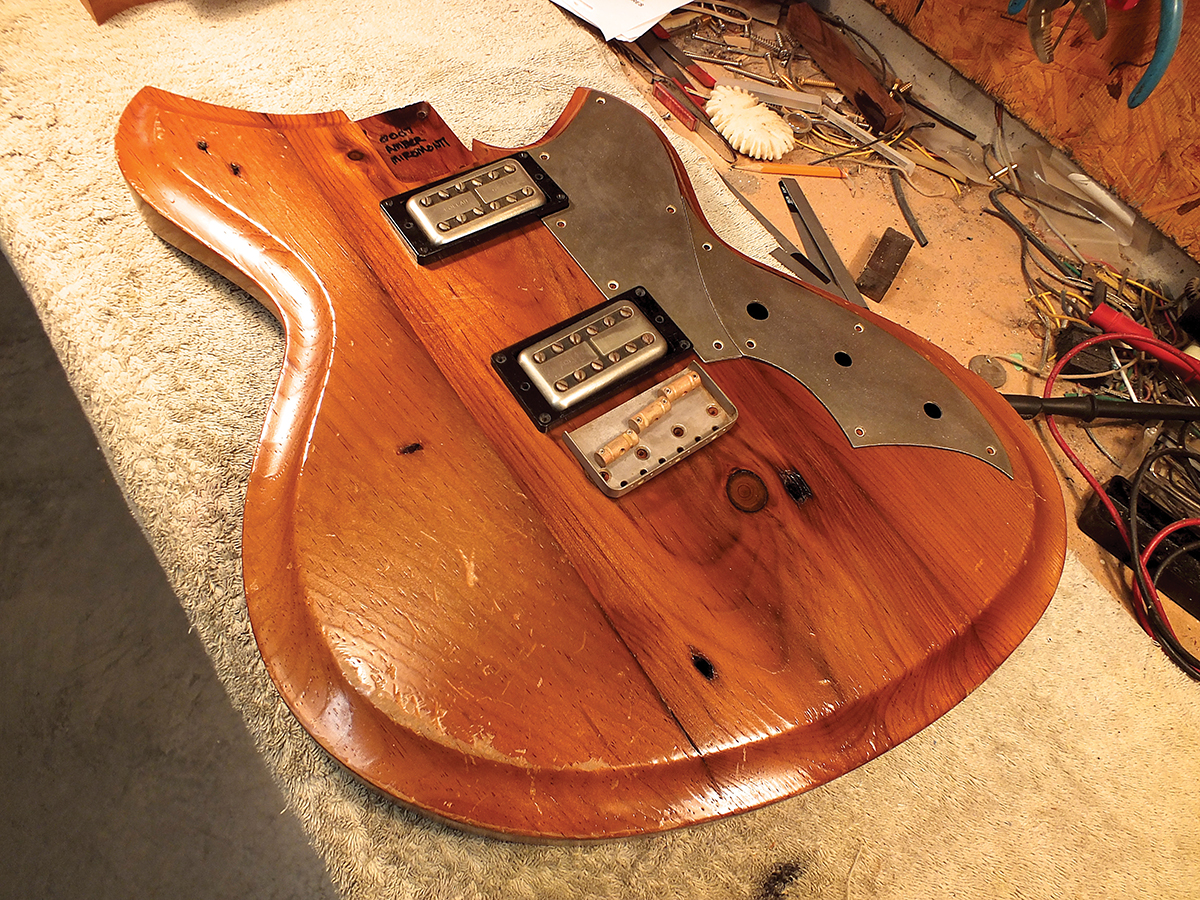 Consequently your well-hydrated acoustic may sound excellent, and you should feel good about maintaining it properly, however you’re unlikely to hear ‘vintage’ sounds from it in your own lifetime. And if you try to force the aging process by drying out your guitar, it’s likely to develop structural issues.

Torrefied wood is also said to have the stiffness and quick tap tone response of decades old wood, so it sounds more ‘vintage’. Compared to seasoned but non-torrefied wood the tone is more consistent because it’s less susceptible to atmospheric conditions. These tonal benefits, rather than the improved stability, explain why heat-treated timber has moved onto the radar of electric guitar builders, too.

Taste The Difference
So, is it just a gimmick or is there something in torrefaction that goes beyond clever marketing? Although we haven’t conducted the kind of tests that would produce a raft of conclusive empirical evidence, several members of the team have formed opinions based on DIY builds and encounters with review instruments.

We recently used an Allparts one-piece roasted neck in a partscaster build and were mightily impressed with its look and feel. Despite a massive 50s profile it was light in weight, and when tapped the neck produced a pure note that rang for a full two seconds.

Although it ended up bolted onto a lightweight but non-torrefied swamp ash body, the guitar turned out to be one of the loudest, liveliest and most resonant T-style instruments we’ve ever encountered. This first experience building with torrefied parts was exciting to say the least.

On the electric side, our editor recently reviewed two of Dennis Fano’s new Novo instruments, both of which featured tempered pine bodies and roasted maple necks. He praised their acoustic volume and resonance and the Serus T even scored a perfect 10. G&B’s stateside correspondent Dave Hunter is also a fan.

On the acoustic side, this writer has recently encountered the Bourgeois D-Custom featuring a torrefied Adirondack spruce top and Alister Atkin’s banner headstock-inspired model, The Forty Three. The Bourgeois’ specialised voicing made it hard to assess whether its temperature-treated top had any ‘vintage’ sonic attributes, but the Atkin was an absolute revelation, even though it arrived hot on the heels of a Fairbanks take on a Gibson Nick Lucas and a couple of 1930s Gibsons that featured in Vintage Bench Test.

The Fairbanks is undeniably a superb acoustic guitar but there is nothing especially ‘vintage’ about its tone… yet. In contrast the Atkin genuinely sounded like a vintage Gibson straight out of the box, with a dark sparkle and arid woodiness that hitherto we hadn’t considered achievable with a brand new acoustic. Another guitar that was awarded top marks.

Although the findings of the G&B team were arrived at separately, they have ended up being very closely aligned. Long term structural stability is tough to assess but our experiences suggest that heat-treated tonewoods used in new acoustic and electric instruments can contribute significantly towards the kind of tonality and dynamic response more commonly associated with vintage instruments.