From the spiky thrills of their debut to the polished melodicism of their latest release, Arctic Monkeys have supplied some of this century’s most memorable guitar moments. 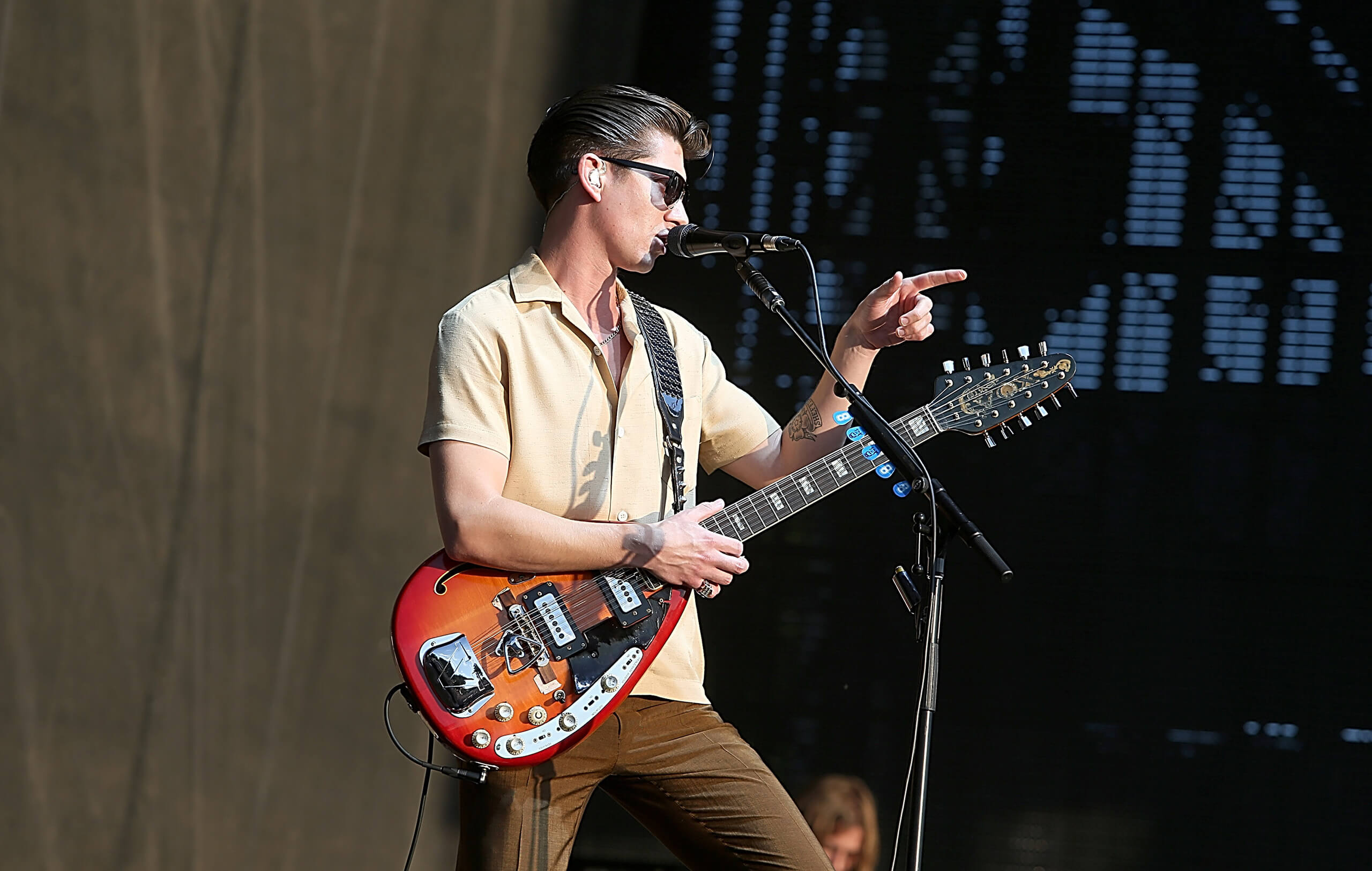 When Arctic Monkeys’ debut single, I Bet You Look Good on the Dancefloor, arrived in 2005, everything changed. Propelled by its motoring four-chord riff and set off by frontman Alex Turner’s distinctive wordplay and attractive twang, the band’s opening gambit featured a relatable urgency that entranced the UK. Their debut album, Whatever People Say I Am, That’s What I’m Not, not only lived up to the hype, it also became the fastest-selling debut in album chart history.

For many years, the guitar was at the forefront of the Sheffield band’s sound, but since 2018’s conceptual Tranquility Base Hotel and Casino, its role has changed. Arctic Monkeys have eschewed riff-led structures in favour of more diverse arrangements. Subtler atmospherics and more restrained movements underlined the group’s expansive, mature compositions.

More recently, the band’s heady seventh album, The Car, widened the band’s palette even further, in the most cogent demonstration yet that Turner, Jamie Cook, Nick O’Malley and Matt Helders have no interest in sticking to any given niche.

In this discography spanning list, we’re spotlighting the key tracks that encapsulate Turner and Cook’s brilliance as guitar players and writers of some of the 21st century’s most lightning-in-a-bottle riffs.

The explosive highlight of 2011’s back-to-basics Suck It and See features a massive drop-D riff. It’s first deployed as a wiry, psych-pop motif before it emerges as a monster with a herculean swagger. The chorus resolves into F and A♯, a satisfying and brief respite from the riff’s mechanical circularity, but that doomy descent is never far away. The riff returns to ladder the track back to its open D root again and again, making this one of Arctic Monkeys’ heaviest works. Married to some of Turner’s most surreal lyrics (“Go into business with a grizzly bear”), this guitar-driven juggernaut is a fan favourite, with its unkempt leads further evidence of the band’s brute force.

The first single from the band’s third album is shaped by a tough riff, initially delivered via fuzzed-out bass but later joined by guitar. Throughout the verses, jazzy licks inject an air of impending danger that lingers the fringes of the arrangement, before the song roars into its hammering chorus. The tottering riff, now deployed on a Fender Jazzmaster, cavorts with the vocal melody throughout the ensuing verses. Turner unleashes a savage lead at the 2:30 mark, seemingly inspired by the playing style of the album’s producer, Josh Homme. The Queens of the Stone Age frontman helmed the bulk of Humbug out in the Californian desert, and assisted the band in breaking free of their initial British indie sound and venturing into wilder frontiers.

On The Car, Arctic Monkeys side-step into lounge, jazz, big band and even prog. This scintillating 1970s-style funk cut features taut rhythm parts and a core riff that rides the wah pedal so hard that its sting and bounce invites comparisons to Issac Hayes and soul-era Bowie. It’s the first major guitar statement of their musically dense seventh record. The wah-effect likely comes courtesy of the Guyatone PS-104 Crossover Box Auto-Wah pedal, a recent addition to Turner’s board.

Arctic Monkeys’ early popularity was partly thanks to their authenticity. Their songs chartered real stories, about real people, in real places – chiefly, their home city of Sheffield. Their style was a refreshing contrast to that of bands who adopted more exotic personalities in order to package their ideas. Fake Tales of San Francisco is squarely aimed at such posers. It’s powered by a strutting riff in B that seems to parody the sort of Delta blues-pretension worn by the songs’ targets. The powerchords in the bridge section form a fiery crucible in which Turner reveals his contempt (“You’re not from New York City you’re from Rotherham”). By pitting themselves against everything they weren’t, the band were defining who they were.

6: One Point Perspective (Tranquility Base Hotel and Casino, 2018)

Arctic Monkeys’ long-awaited follow-up to 2013’s AM wasn’t what many fans were expecting. Yet, for others, the band’s step change from slick rockers to house band on the moon worked wonderfully well. While the guitar takes on more of a supporting role on the record, it still features many moments of six-string magic. On the second track, One Point Perspective, the bridge section swings into a downcast minor-key cycle draped in delay and chorus effects, and then into a lush spotlight solo. The fuzzed-out solo erupts prior to the final verse. Played by Turner on his Gretsch G6143 Spectra Sonic through a Z.vex Fuzz Factory, its harmonic bite brilliantly contrasts the rest of the arrangement’s lightness of touch.

Powered by its coruscating fuzz-infused riff, intense groove and honeyed vocal harmonies, the lead single from 2013’s AM was the record in a nutshell. That fundamental riff was written by bassist Nick O’Malley while on tour with The Black Keys, and navigates around F#m with pent-up urgency. The minor pentatonic proves an invigorating foundation on which the band develop their new commercially tinged sound. Turner was armed with his 1962 Gretsch G6128T Duo Jet, while Cook played a Gibson SG. R U Mine is a live favourite, and when its madcap solo swirls into focus near the track’s conclusion, audiences at venues around the globe lose all inhibitions.

It all started here, with the squalling, reckless leads and impish four-chord shuffle of Arctic Monkeys’ debut single. Summing up their down-to-earth yet cocky attitude in under three minutes, the lo-fi track is loaded with impressive guitar action. Capturing the giddy thrills of youthful nightclub flirtation, the song’s arrangement builds away from and resolves back to its central four-chord flow in an endlessly captivating way. Turner’s joyride of a lead line opens the track, with the frontman sliding down the fretboard with spontaneous glee. Toting a white Fender Strat and red Tele, respectively, Turner and Cook cut strikingly youthful but hugely appealing guitar-hero figures in the single’s Old Grey Whistle Test-style video.

The four-piece’s second album explodes into life with an aural assault that levels up the intensity of the previous year’s debut. Strapped into Matt Helder’s irrepressible drum track, Brianstorm’s heaving, thrusting riff is a kind of darker spin on I Bet You Look Good On the Dancefloor’s chordal loop. The track is a masterclass in tension and release. Its pivotal riff in F is supported by a violent tremolo-picked lead line, burrowing towards a detonation of energy as the riff punches to life once again. A live fixture, its main riff is one of those rare, precious pieces of guitar work that can get a whole festival singing along to it.

Among the band’s most beloved pieces, this multi-sectioned closer is an affecting finale to the band’s debut album. It opens with a rising three-part riff that builds into a muscular crescendo. Here, the band gives way to Turner’s high-octave B major triad-based melody line in what is one of Arctic Monkeys’ most inspired arrangement choices. The song’s verses bound into a steady groove, with Turner’s chords, which occasionally dip from stable major into minor shapes, muster a sense of pain and poignancy. By the time the track reaches its fired-up outro, we’re all getting lumps in our throats and longing for our hometowns. “When we recorded A Certain Romance, we were all like, ‘Woah, woah, woah…’” Turner told NME. “‘What have we done here?’ Pushing the music that far out from what we’d done before initially felt contentious, to say the least.”

For many fans, AM is the band’s best. Its opener is defined by a monolithic blues riff in F, which sets the stage for the shadowy journey ahead. The threatening riff’s circularity makes it instantly memorable. Written by Turner on his 12-string Vox Starstream XII, the track was pivotal to the development of AM. “It felt kind of heavy – and heavy in mood as well,” producer James Ford told NME. “It had a weight to it that I really like. I remember when that came together being really excited, and seeing the picture crystallise of where we were going.” The dark, almost gothic feel of Do I Wanna Know? has few bedfellows in Arctic Monkeys’ live setlist, yet it’s one of their most recognisable songs. It features one of the most alluring licks of the 21st century. There’s no better evidence of Arctic Monkeys’ prowess.