BOSS GX-100: Everything you need to know

BOSS’s brand new multi-effects unit is the first from the effects giant to incorporate a touchscreen, but that’s not all you should be getting excited about. 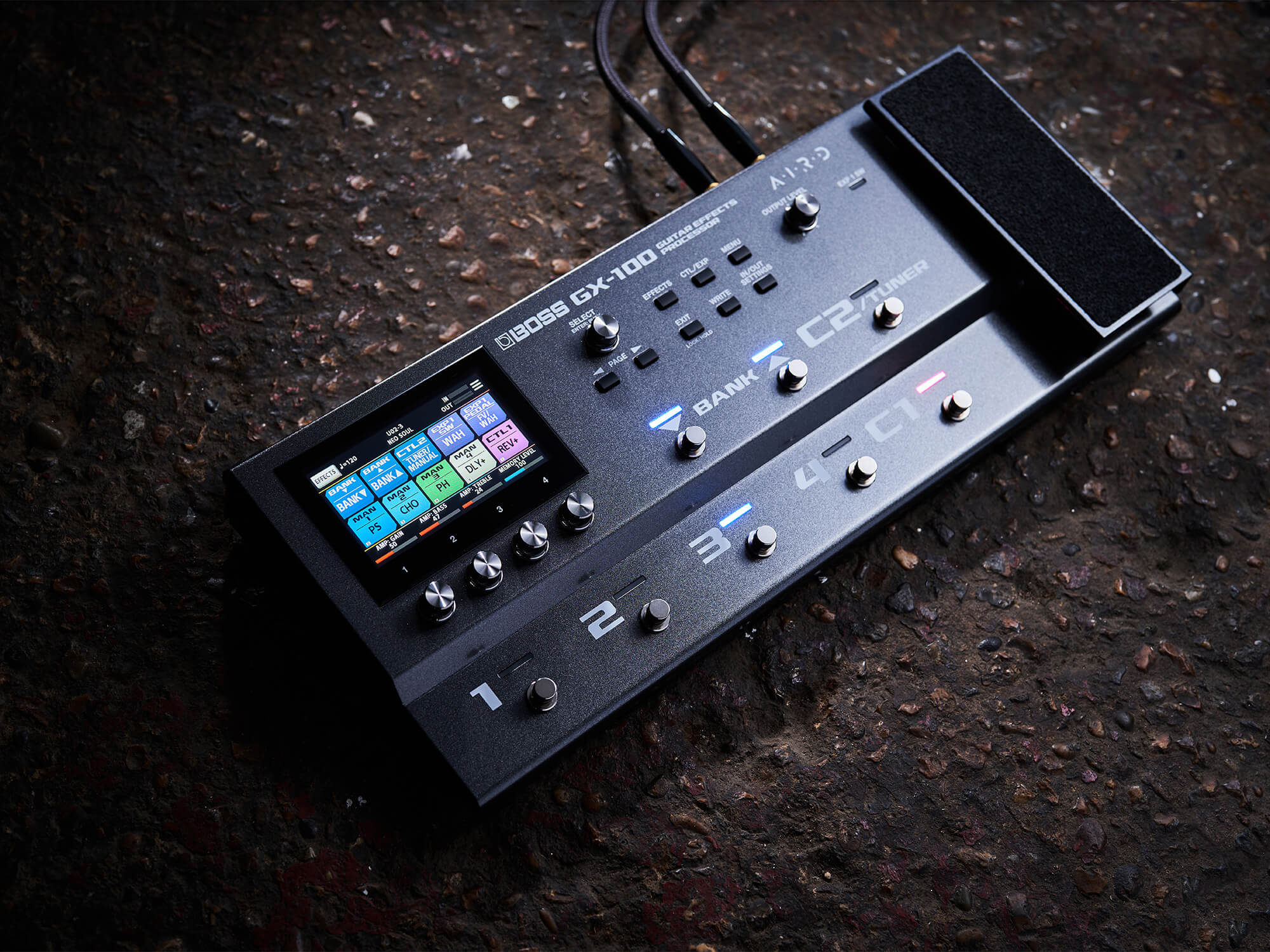 In March 2022, BOSS unveiled a brand new mid-level multi-effects unit that features an eye-catching first for the amp and effects maker – a full-colour touchscreen that enables you to quickly and intuitively select and tweak your sound like never before. But under the hood there’s plenty more to get excited about with this new entry into the BOSS multi-effects family – here’s everything you need to know about the GX-100, with helpful input from the people who made it.

The full-colour touchscreen will offer a ‘new era of usability’

The headline feature of the GX-100 is certainly going to change the game compared to the more traditional multi-effects units – including the flagship GT-1000 – and reflects how touchscreens have become a part of everyday life for nearly everyone. “By adopting a more modern user interface, the GX-100 allows for a more user-friendly workflow,” BOSS tells us. “It’s an extension of the current consumer lifestyle, and introduces a new era of usability to BOSS multi-effects. It has never been easier to create, tweak and experiment with patch creation.”

It offers the best of both worlds for multi-effects stalwarts

If you’ve been a long-time multi-effects user, chances are you enjoy the reassuringly tactile feel of a parameter knob between your fingers – and BOSS hasn’t totally abandoned that for the GX-100 in the quest of newfangled touchscreens. By focussing on the best tool for the job, the BOSS team has created a hybrid workspace that uses knobs, switches, buttons and that touchscreen to give you the best of both worlds.

“The hybrid design combining touchscreen and knobs is the identity of GX-100,” BOSS says. “In the planning phase, we considered a fully touch-operated device without knobs. However, a multi-effects processor has a lot of parameters to edit and most guitarists are familiar with traditional knob operation to tweak the tone. By synchronising the benefits of both, you can freely draw the effects chain with a fingertip then colour detailed tone parameters with dialling knobs, without losing inspiration.”

The onboard sounds have been created without compromise

The GX-100 might be a mid-priced unit, but the amp and effects sounds onboard are anything but. Derived from BOSS’s flagship GT-1000 unit, the GX-100 includes over 150 onboard effects options, as well as 23 onboard amp models to pair them with, giving you all the sounds you need in one unit. Thanks to BOSS’s AIRD technology and refined Tube Logic approach, each of these amps has a natural amp feel and the ability to tailor your output to any situation, whether that’s amp input, full-range monitor, or house PA. In addition to BOSS’ own engineers, popular guitar players John Browne (Monuments), Jack Gardiner and Jay Leonard J also developed presets for the unit.

There’s plenty of scope to experiment

The GX-100 doesn’t just offer you a cornucopia of amp and effects types borrowed from the GT-1000, it also offers something brand new – a non-fixed effects chain allowing you to place your virtual stompboxes in any order you like. With 15 freely assignable effects blocks available and the ability to use more than one type of the same effect in a single chain, the ability to stack drives or chain atmospheric effects together is a huge boon for sonic experimenters. But it was one of the most difficult aspects of the GX-100’s development.

“The basic algorithm was derived from BOSS flagship GT-1000, but to put them into the new free-assignable effects chain, we had to build up the sound engine from scratch,” BOSS explains. “While ensuring we kept BOSS quality, developing the whole system so that each effect would smoothly link with each other was one of the big challenges of the process.”

The GX represents a new frontier for BOSS multi-effects

If you’ve bought a BOSS multi-effects unit in the last few decades, chances are that it features either a GT or ME prefix in the model name – so what gives with the GX? Well, while the GT series will continue to focus on the needs of live performers, the GX is an acknowledgement that the way guitarists are making music and sharing their music with the world is changing, and the GX-100 is the perfect unit for them.

“The GT series was always focusing on live performance, and is still the flagship line, while GX-100 is focusing to deliver wider experiences that match up with the modern workflow,” says BOSS. “Live performance is no longer always the main purpose for all players. The GX-100 packages many features with a user-friendly format to make the unit at home in many settings, such as home practice and recording, live streaming, and live performance.”

Intrigued by the potential of the GX-100? Head to boss.info to find out more.