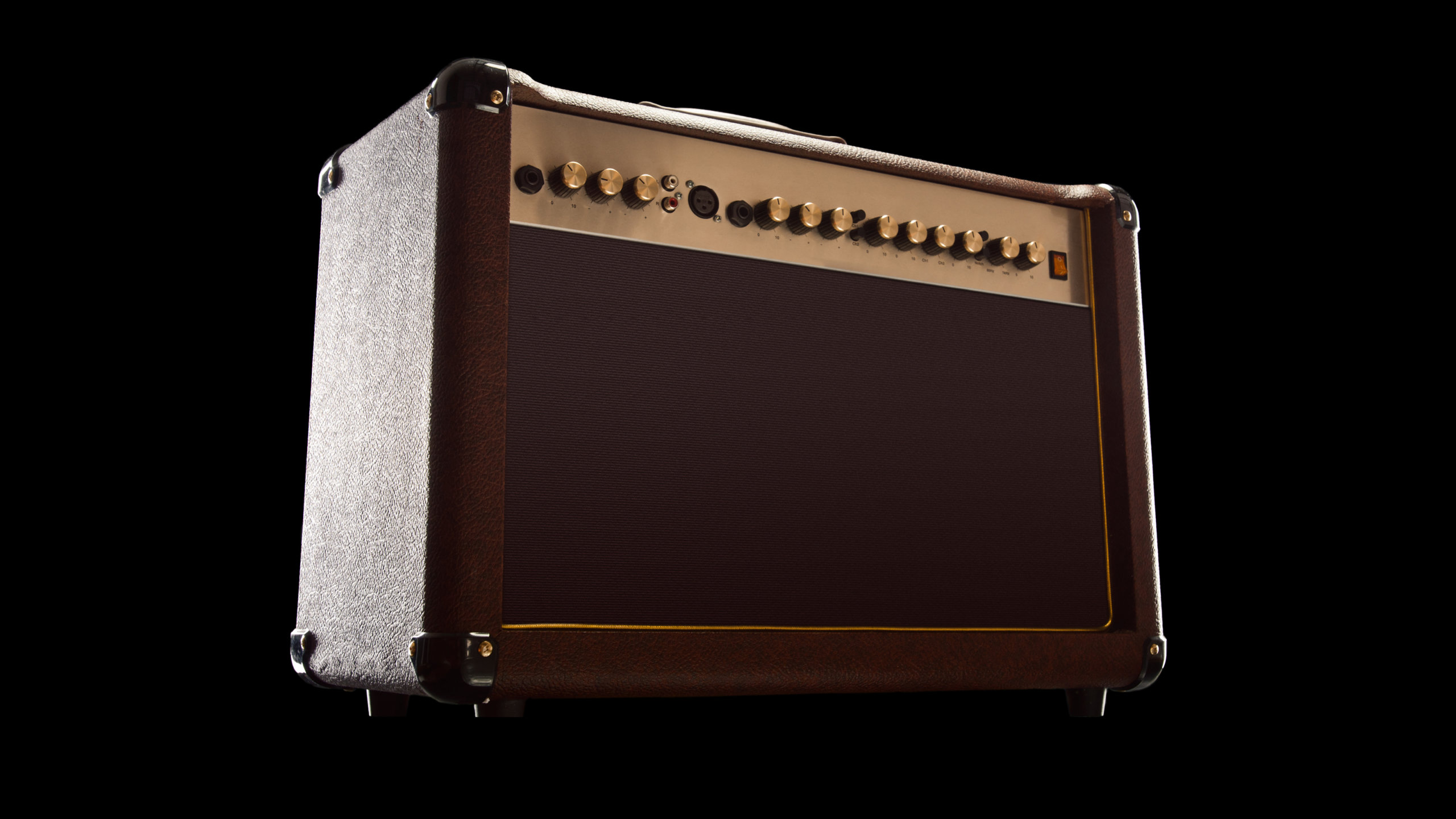 The world of amplifiers, like most hi-fi equipment, is ruled by electric wizardry. It’s where circuit boards, tubes and wattage come to play, and where words such as “warm,” “sparkly,” and “dark” are chanted like prayers. To someone starting out on the instrument, this world can be hostile and impenetrable. Which is where we come in.

Amplifiers are as—some would argue more—important in shaping your sound as the guitar itself. But there’s no need to burrow into that debate. Instead, when shopping for an amp, judge them on these three factors: tone, power, and features.

Oh, and if you’re trying one out at a shop, remember to lug your guitar along. That’s the best way to find a good match and swipe right.

A great amp can make a modest guitar punch well above its weight; a bad amp will transform a top-shelf axe into a bargain bin sitter. The first thing you have to decide is the type of amp that best fits your needs. And there are four to choose from: tube, solid-state, hybrid and digital.

The anatomy of amplification

Before diving into all that, however, it helps to understand just how the signal flows from your guitar’s pickups to your ears.

When you hook your guitar up to an amp, you’re plugging it into its preamp. That’s the component that takes the signal from your instrument and, through the “Bass,” “Middle,” and “Treble” controls, processes it. Once the preamp has done its job, the signal is channeled into the power amp. Here, the ‘real’ amplification occurs; the power amp boosts the signal and sends it to the speakers, which in turn convert the signal into sound. In simpler terms, the preamp shapes your sound while the power amp determines its strength.

You might have seen “Gain” and “Volume” knobs on many amps and wonder about the difference. Think of the former as the input level and the latter as the output level—and it’s an important distinction when discussing tube amps.

Many High Priests of Tone consider these the holy grail of guitar amplification. And, in the right hands, they may very well be. Tube amps (or more accurately, all-tube amps) have vacuum tubes in both the preamp and power amp stages that boost signals. Don’t worry about how they do that for now.

The consensus about tube amps is that they are more responsive—so playing with a light or heavy touch will yield different tones—and offer a smoother, ‘fatter’ sound that lends heft to your playing. But the foremost reason guitarists prefer tube amps is their natural distortion. If you crank up the gain but keep the volume low, you’re forcing the tubes to work harder than what they were designed to do. The result? A gritty, saturated overdrive that, perhaps because of its unpredictability, has been cherished for decades.

That said, there are just as many snags with tube amps. They’re heavy, notoriously expensive and they require regular maintenance. And if you’re new to the instrument, you probably won’t be able to exploit a tube amp’s quirks—it’ll sound like a very ordinary solid-state amp.

In place of tubes, these guys rely on transistors to amplify signals. Many believe that transistors don’t offer the subtlety and responsiveness of tubes, and that taking them to breaking point results in a thinner, or harsher, distortion. But that difference is negligible to untrained ears. And many genres—metal, for instance—would benefit more from the consistent ‘chugga-chugga’ that a good solid-state can produce.

Solid-state amps are almost always lighter and cheaper than their tube siblings, and require close to zero maintenance. So it’s no surprise that most beginners start out with one of these.

There are those who have no qualms shelling out thousands for an authentic mid-century Fender amp because nothing else, to them, sounds remotely close. That may have had a smidgen of truth a decade ago, but the digital or modeling amps today have come a long way in replicating those time-honored tones.

Rather than tubes or transistors, these machines use digital technology in the preamp stage to simulate the legendary amps of yore. And depending on the model you’re looking at, digital amps can even mimic speakers, which gives you a wealth of mix-and-match combinations to choose from.

The downside of modeling amps is their steep learning curves. Dialing in a tone that pleases your ears can take hours of fiddling with buttons labeled with arcane terminology, hours that could instead be spent on your instrument.

This can mean one of two things: Either the amp’s half tube and half solid-state, or it has a digital modeling preamp and a tube power amp. The vast majority of the former only use tubes in their preamp stages, meaning you can force them to ‘break up’ like you would an all-tube amp. But don’t think of these as a ‘best of both worlds’ deal—more like ‘Jack of all trades.’

Every guitarist wants to command a phalanx of gargantuan speakers. Unless you’re planning to fill a stadium, or you live five miles from your closest neighbor, that isn’t the best idea. That set-up needs to be tear-the-roof-off loud to sound any good.

So before you make the call on the amp to bring home, decide what you’ll be using it for and where you’ll be using it. Once you’ve settled that, you can start sifting through wattages, configurations and speaker sizes—those are the critical factors you should consider.

Wattage is the measurement of an amp’s power output, but they’re not on an absolute scale. A five-watt tube amp can be louder than a 20-watt solid-state, for instance. So while it’s satisfying to boast about your new 100-watter, the reality is that a bigger number isn’t necessarily louder, or better.

There are only two configurations: combos and separates. The former packs in the ‘head’ (that’s the preamp and power amp) and speaker cabinet into a single box, while the latter comes as—you guessed it—separate parts. It’s a trade-off between portability and flexibility.

There are also rackmount preamps and power amps, which grant you even more freedom to marry discrete components. However, doing so can be daunting, and we wouldn’t recommend newbies go down this path.

These are measured in inches by diameter, with common sizes being eight, ten and 12 inches. The rule of thumb here is that larger speakers issue out stronger bass notes, and smaller ones are better at handling the higher frequencies. When you see terms like “4×12,” it simply means the number and size of speakers in a cabinet—in this case, it’s four 12-inch speakers.

Half-stacks and full-stacks refer to the number of cabinets. The former has one, and the latter two or more. These are monstrous, heavy beasts that are best suited for gigging or rehearsing with a band.

So how do they all add up?

Apartment dwellers and bedroom rock stars should stick to small combo amps—anything between five to 20 watts should suffice. But if you’re really short on real estate, consider desktop or mini amps instead. They’re about the size of your average Bluetooth speaker, and many can even run on batteries. No guarantees about nailing the tone you want, though.

If you plan on playing with a drummer in your garage, then you’re gonna need more muscle. A half-stack will dish out more than enough oomph for your guitar to soar over the snares and cymbals. And while a full-stack is overkill, it’s great for giving your drummer volume envy.

Most modern amps, even the tinier ones, are studded with a constellation of knobs, switches, jacks and buttons. While it may seem like the more the merrier, you don’t want to fork out extra for features you’ll never use. Look out for channels, built-in effects, inputs and outputs, and, as discussed earlier, modeling functions.

Most amps have at least two channels—a clean mode and an overdriven one—with many bigger models upping the ante with several more. Some even let you tweak the voicings of individual channels. But if you’re simply after sparkling cleans and saturated distortion, two channels are all you need. Better yet if each channel has dedicated equalizer (“Bass,” “Mid” and “Treble”) controls.

Reverb and chorus are common built-in effects on analog amps, while hybrid and digital ones can be equipped with dozens of effects both ordinary and outrageous. They’re fun to toy around with, and they’re useful introductions to the wild world of pedals. But an onboard effect won’t sound as good as a dedicated boutique stompbox—for now, at least.

Peek at the back of an amplifier and you’ll find input and output jacks of all sizes. This is where you’ll hook up other devices, such as a footswitch to control your onboard effects, external speakers for more might, and pedals to daisy-chain into an effects loop. Some models also come with outputs for recording or for plugging into a mixer.

Now that you’re armed with the vocabulary of guitar amplifiers, stay tuned for our recommended models. But for now, go forth and make some noise.