This family band have pricked the ears of fans around the globe for their sweltering blend of African and Western sounds – just don’t call it “world music”. 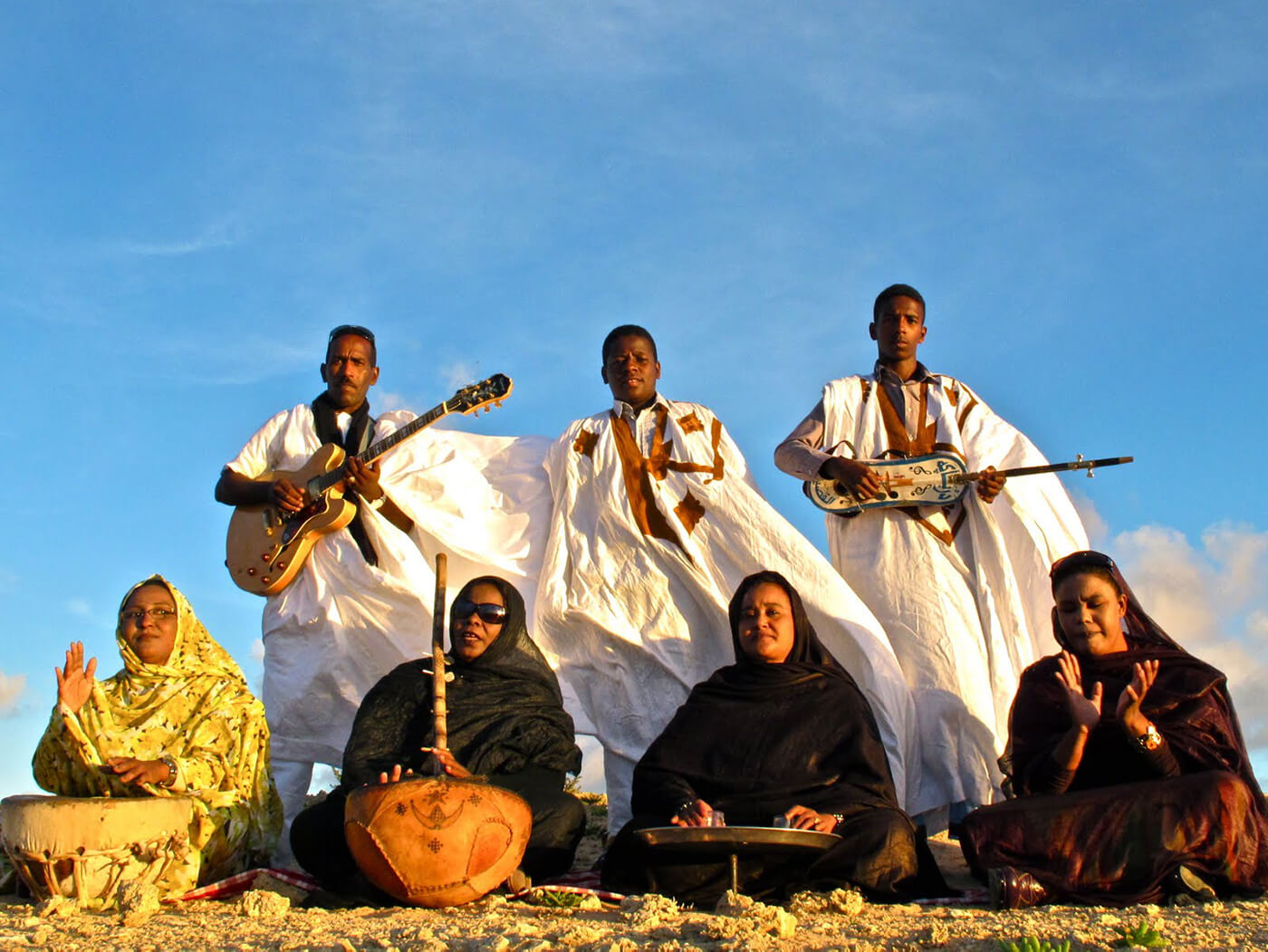 Not many musicians would know about Dakhla, a scorching peninsula in Northwest Africa that juts out of the Sahara and into the Atlantic Ocean like a root desperately seeking water. It’s a politically turbulent region over which the spectre of colonialism still looms large, where Spanish, Moroccan and Arab cultures have for centuries clashed with the practices of the indigenous groups. Group Doueh were forged from that very melting pot.

The family band bear the nickname of its patriarch, a swaggering guitar hero whose love of Hendrix, the blues and traditional music from the region is plain to hear. But beyond the incendiary solos that roar with the force of a sirocco, the group are known for their hypnotic rhythms, use of Mauritian folk instruments and the urgent, repeated chants in their native Hassaniya tongue.

Take a listen to five of these sun-bleached tunes, and see if you agree with the critics’ label for Group Doueh’s genre: “desert blues”.

Group Doueh may have been around since the 80s, but it wasn’t until the mid-noughties that Western ears paid attention. In 2005, a crate-digging record label, Sublime Frequencies, heard them on the Moroccan radio, promptly sought them out and released Guitar Music From The Western Sahara two years thereafter. This track exemplifies the whole record: lo-fi, frenetic and bordering on psychedelic.

Since then, the Doueh clan have enchanted audiences across the world – and this tune represents just how far they’ve come from the Saharan dunes. Azawan is a 2017 collaboration with Parisian trio Cheveu that sheds African styles and instrumentation in favour of more straightforward rock.

It’s not all strident rock ’n’ roll, though. Group Doueh’s 2012 album, Beatte Harab, presents a quieter side of the band that’s rooted in the traditional music of the Sahrawi, Doueh’s ethnic group. On this track, you’ll hear the tinidit (a traditional Mauritian lute), ardin (harp), tbal (clay drum) and kass (tea glasses) share the stage with the more familiar guitars and synths.

Raw, unfiltered and crackling with electric energy, Ragsa Jaguar could pass off as a punk number recorded with barebones equipment in a heaving garage. Or, in the middle of a wind-swept desert. Which is exactly what this is: although released in 2012, Ragsa Jaguar comes off Treeg Salaam, a five-tracker compiled from Doueh’s archives.

Doueh’s first ‘guitar’ wasn’t a Squier or a Yamaha. It was an oil can, nailed to a wooden plank, with fishing lines for strings. That was in the 70s, and the musician gradually fell in love with the sound of the electric guitar, with Hendrix and James Brown as his idols. You’ll hear shades of the West in Zaya Koum, whose driving beat and tenacious wah solos are as merciless as the desert sun.