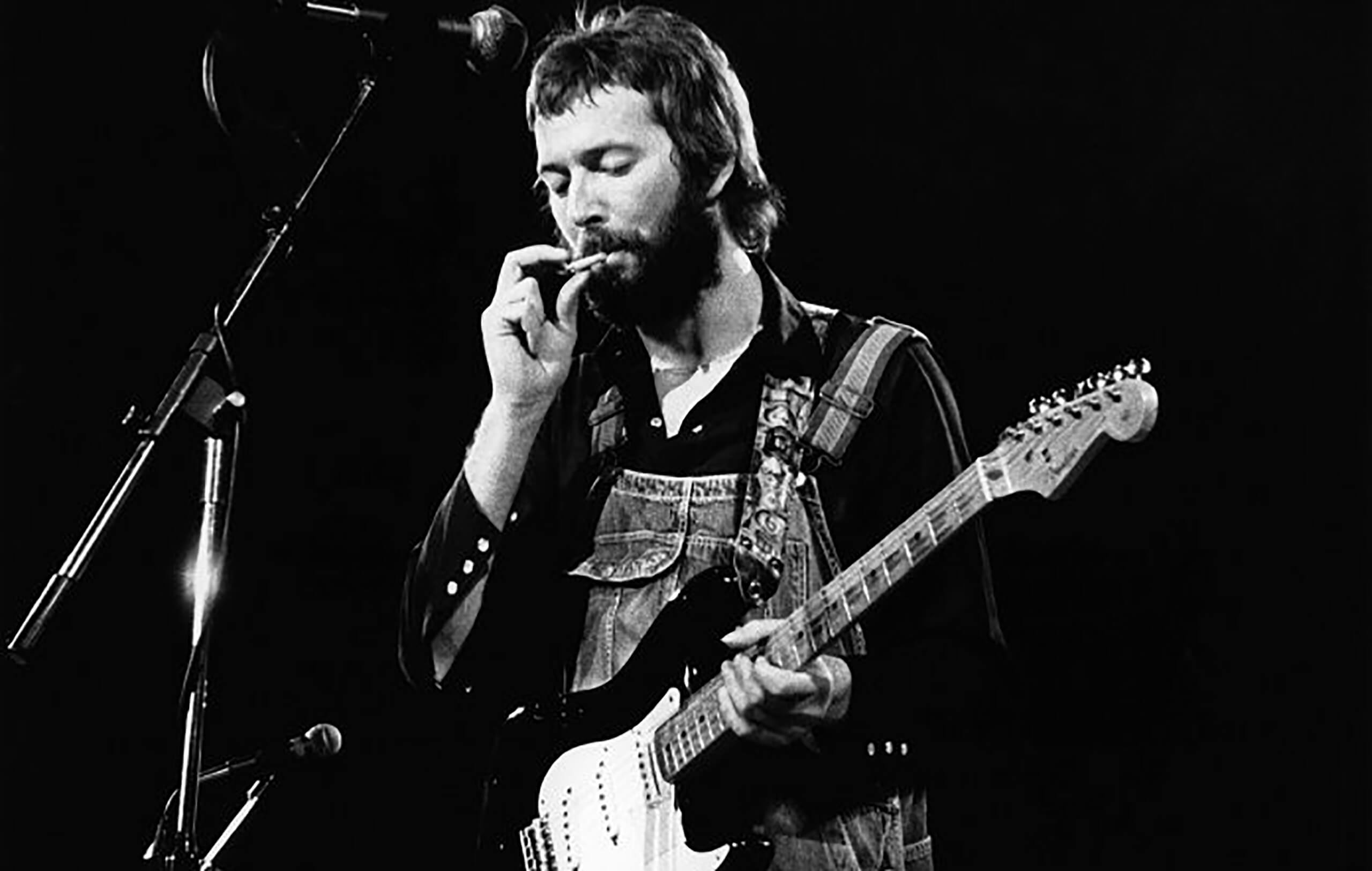 Guitar Legends: Eric Clapton Pt 2 – from Layla to the Crossroads

Eric Clapton’s solo career since 1970 has encompassed everything from rootsy JJ Cale-alike shuffles to shiny AOR to stark acoustic blues. Here’s an overview of the best and his highly influential classic gear, too…

As Eric Clapton entered the 1970s, he changed style drastically from the fire and brimstone blues power of his 60s releases (see Guitar Legends: Eric Clapton Part 1). His final collaboration of the 60s, with Delaney and Bonnie (Bramlett) clearly made a big impression. He settled into a much more laid-back rootsy style and switched his main guitars to Fender Stratocasters. In the 80s and 90s, things got even more polished where – his licks aside – his electric music was sometimes barely ‘blues’ at all. It was big, shiny pop-rock with state-of-the-art production and big synthy backing melodies and the then de rigueur crashing drums. It didn’t please all his original ‘Clapton Is God’ 60s fanbase, but the wider public eventually got to know his name better: in the late 80s and 90s in particular, Clapton was a radio-friendly star.

In some ways, things got simpler. But he released so many albums (and quite a few hit singles) that the following his just an outline of Eric Clapton’s diverse last 50 years…

In his own words

“Derek And The Dominos was of the most powerful bands I’ve ever been anywhere near.”

“English culture, and fashion, was always much more tweedy and introverted, so when I finally got to Italy in the mid-80s I was overwhelmed by the vivacity of it all, and the colours and the flamboyance of everything, and I was sucked in, I really loved it.” On his so-called ‘Armani Years’

“All I am certain of right now is that I don’t want to go anywhere, and that’s not bad for someone who always used to run.” In his autobiography, 2007

On his eponymous solo debut of 1970, Clapton used the core of Delaney And Bonnie’s backing band and co-wrote the majority of the songs with Delaney Bramlett – accordingly, it’s more laid-back and straightforward than any of the guitarist’ s previous recordings. Clapton has since said he doesn’t particularly like the LP because he thinks his voice is “thin” but it was notable for the debut-proper of his second most-famous Strat, Brownie. That’s it on the cover.

Released just a few months later in 1970 came Layla And Other Assorted Love Songs, under the pseudonym Derek And The Dominos, again with Delaney And Bonnie band-members Bobby Whitlock (keys), Carl Radle (bass) and Jim Gordon (drums). The original plan was a “straightforward rock’n’roll band.”

By his own admission, Clapton didn’t want to be a frontman at the time so a made-up name offered some anonymity in his mind (even though hardcore fans knew it was Eric Clapton). But he also admitted it was “cover” because he’d started seeing George Harrison’s wife Pattie Boyd. “We were a make-believe band,” Clapton later recalled. “We were all hiding inside it. Derek And The Dominos – the whole thing. So it couldn’t last. I had to come out and admit that I was being me. I mean, being Derek was a cover for the fact that I was trying to steal someone else’s wife. That was one of the reasons for doing it, so that I could write the song, and even use another name for Pattie. So Derek and Layla – it wasn’t real at all.”

There was also the addition of Duane Allman, with whom Eric had become good friends, and contributions from Dave Mason of Traffic, who also guested on Jimi Hendrix’s Electric Ladyland.

Given its now fabled status among guitarists, it might be a surprise that the Layla… LP didn’t chart at all in the UK originally and didn’t break the Top 10 in the USA: in EC’s own words, “it died a death.” The pseudonym had worked a little too well.

But Brownie was again the main Strat for recording Layla… and later became fabled. It’s pictured on the back sleeve. However, Clapton took the LP’s (initial) failure and bad reviews very personally, and this was when his heroin problems became quite severe.

As the 1970s went on, Clapton reverted to being a simple solo-name artist. His addictions meant a four-year gap until 461 Ocean Boulevard (1974) but he started to yield more successful, or at least familiar, hits: a light cover of Bob Marley’s I Shot The Sheriff and his own original, Let It Grow. Famously, he’d by then replaced Brownie with his most-famous ever guitar, Blackie. It’s a total hybrid, much like David Gilmour’s Black Strat.

In the introduction to the book, The Stratocaster Chronicles (2004), Eric explained: “I was in Nashville at a store called Sho-Bud, as I recall, and they had a whole rack of old 50s Strats in the back, going second-hand. They were so out of fashion you could pick up a perfectly genuine Strat for two hundred or three hundred dollars — even less! So I bought all of them. I gave one to Steve Winwood, one to George Harrison, and one to Pete Townshend, and kept a few for myself. I liked the idea of a black body, but the black one I had was in bad condition, so I took apart the ones I kept and assembled different pieces to make Blackie, which is a hybrid, a mongrel.” Blackie would remain Clapton’s main guitar from 1970 to 1985.

Commercially he started to build. Slowhand (1977) yielded Lay Down Sally and Wonderful Tonight (still his best-selling single), but these were miles away from the frenzied blues-rock he’d cut 10 years earlier in Cream. Perhaps it was just maturity: by this point, Clapton was 32.

By the 80s, his music had changed again. He still wasn’t having huge hits that really reflected his reputation or singing/playing ability, and his bands were often made up of the pick of US sessioneers (such as bassist Nathan East, keyboardist Greg Phillinganes) and pop-rock superstars (drummer Phil Collins, who also produced 1985’s Behind The Sun). The music was often hit and miss, by Clapton’s own admission, even if he was by now on MTV: “I think I deliberately sold out a couple of times,” he later reflected. “I picked the songs that I thought would do well in the marketplace, even though I didn’t really love the song.” That said, the ongoing reverence of the guitar cognoscenti maintained Clapton’s live draw status.

And Fender knew this. In 1988, the company debuted the Eric Clapton Signature Model Stratocaster. It is based broadly on the then just-retired Blackie, but with a lot of extra zing: the modern electronics could produce a fatter sound, so the aim was a potentially Gibson-sounding Strat to straddle his whole career’s sounds. The original prototype had a 14db boost but Eric wanted more, so Fender created a prototype with three Fender Gold Lace Sensor pickups and a TBX circuit/control that had a 25db mid-boost. The guitar also has a softer V-neck than Blackie. It became much admired: The Edge from U2 plays one (he perhaps keeps that fact quiet!) as did Ed O’Brien during Radiohead’s 90s pomp. Impressively, it’s still in production 32 years on, albeit now with Vintage Noiseless single coils.

His signature Strat originally came in only the three colours Clapton requested: Ferrari Red, 7-Up Green and charcoal grey: so far, so 80s. But it was inevitable a black would emerge before long, and it did in 1991. Current colours are black (a la Blackie), Midnight Blue and Mercedes Blue.

Despite having just been honoured with his own signature electric, Clapton then threw two curveballs: the live Unplugged album (1992) and the all-blues-covers studio LP From The Cradle (1994). The former was an absolutely huge success: Grammys galore, a shuffling reworking of Layla and the elegy for his tragically deceased son Conor in Tears In Heaven. Unplugged was middle-of-the-road stuff to some degree, but EC’s musical DNA meant its quality was undeniable. For Unplugged, he reached for his favoured brand of Martin: a 1939 Martin 000-42 and a 1966 Martin 000-28. Martin have produced a total of six (SIX!) different EC signature models over the years.

For From The Cradle he dug deep into his massive collection, reportedly using 50 (!) guitars, including a tobacco dot-neck Gibson ES-335 and his famous Cherry Red ES-335 he’d bought in The Yardbirds. He also used an Olympic white Eric Clapton Model Strat from the Fender Custom Shop, several different Gibson L-5s, Byrdlands and Super 400s.

From thereon, he’s continued to cut albums which are sometimes great, sometimes rather bland. His songwriting has never been his greatest asset, anyway: his playing is. And often-times, there perhaps hasn’t been quite enough of the latter on recent albums. But he was canny enough to keep reinterpreting the blues originals that first fired him, one peak being the covers album Me And Mr Johnson, which paid homage to the ‘King Of The Delta Blues Singers’ but worked surprisingly well: Clapton actually manages to make Johnson’s spooky songs sound like a party. Peter Green had just pipped EC to a Robert Johnson covers album, but Clapton’s far outsold the Fleetwood Mac man’s. No wonder, really, as Green had only just returned from years MIA. Clapton also cut creditable duet albums with two his heroes, JJ Cale and BB King.

It was live shows where Clapton continued to shine best, as he has such a deep well of songs and covers to draw on. In terms of keeping the blues alive, there are few more important on his scale of fame. The massive success of his bluesmungous Crossroads festivals is testament to his sincerity, and of course, helped the brand-building for his Crossroads Centre rehab centre on Antigua: most of the original guitars we’ve mentioned were auctioned in three sales, in 1999, 2004 and 2011, with a sum in the region of $11m raised.

In recent years, he’s been playing ‘Graffiti’-finish EC signature Strats, custom painted by a variety of visual artists. He’s a fan of street art: maybe he took that ‘Clapton Is God’ scrawl more seriously than he’s previously said? He’s undoubtedly slowing down now, though: a series of reported hand-health problems have led to some suggestions he can’t play anything like he used to any more, so whether he’ll be seen on stage again anytime soon is a matter of conjecture…

Vintage tweed Fender Champs (studio) and tweed Fender Twins (live) have been favourites since the 70s – he eventually got the Fender Custom Shop to hand-build him replicas. But he still uses Marshalls sometimes, as well a Soldano SL-100 and a Cornell Eric Clapton Custom 80 (if you own every bit of kit with EC’s signature on it, you’re a millionaire.) There was also Digitech’s Crossroads Artist Series Pedal (seven of his greatest tones, pre-set and ready to wail) but it’s long out of production. Some of the individual pedals he’s favoured include, a Boss Chorus CE-3, a Jim Dunlop 535 Crybaby wah, a Jimi Hendrix wah, a Vox wah, a Boss TR-2 Tremolo, even a Boss Heavy Metal pedal. You name it, he’s played it: that happens when a career stretches over six decades.

Given that it’s 50 years since Clapton started his solo career, his material has gone through many stylistic changes, even if his playing and voice remain essentially unchanged. Here’s a playlist of some of his best and best-known solo career moments beginning with his self-titled debut album of 1970…

Make sure you study How To Play The Blues Like Eric Clapton, and all of the blues primers in Guitar’s lessons.