How to choose and buy an acoustic guitar 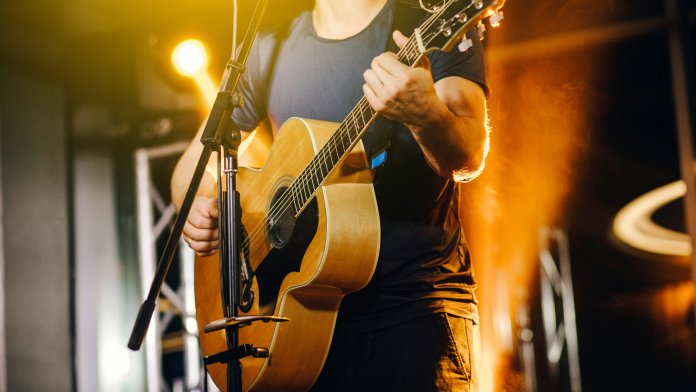 You’d only have to look at the axe-wielding chart-toppers of the current decade to realize that the acoustic guitar has tailored a swift return to the limelight. But picking an acoustic to follow in the footsteps of Ed Sheeran, Post Malone and, yes, Tay-tay, can be tougher and costlier than choosing an electric. It comes down to one simple fact: Since you’re likely to play an acoustic guitar ‘clean’ most of the time, its materials, construction and shape more significantly affect its sound as compared to an electric.

We’ll make things easier for you and break down the hundreds of acoustic guitar models into three broad elements: body shape and size, woods, and cost. For the purposes of this guide, we’re only looking at steel-stringed guitars and not nylon-stringed—or ‘classical’—ones.

The rule of thumb when it comes to acoustic body shapes is that the larger the instrument, the deeper and ‘roomier’ its sound. Which suggests there are already two factors that may work against each other: the tone you’re gunning for versus the comfort of playing the guitar. If you’re after a bone-rattling bellow but are on the small side, then there’s a compromise you’ll have to make.

Volume, however, is where things get tricky. Even if you have a strong arm, a small acoustic probably won’t run as loud as a large one. That said, the former’s more responsive to a light touch—meaning you won’t have to play as forcefully to reach the same decibels as you would on a big guitar.

While there are dozens of body shapes out there, it helps to sort them into four categories in roughly ascending sizes: concert, auditorium, dreadnought and jumbo.

Concert and grand concert guitars are some of the smallest you’ll find today, measuring about 13.5 to 14.5 inches across the widest portion of the body. Due to their bright and punchy tone, most fingerpickers flock to these guys, but strumming them also yields a balanced, if a little small, sound. If you’ve seen Ed Sheeran in concert, he’s probably rocking a concert-sized guitar. His signature Martin guitars, for instance, are ‘0’ (the brand’s terminology for concert sizes) models.

Also known as “orchestra” models, auditorium and grand auditorium guitars look like bigger siblings of the concert instruments. They’re versatile, medium-sized guitars—about 15 to 16 inches across its widest—that are just as responsive whether you’re using a light or heavy touch to pick, pluck or strum. Although you won’t be able to achieve a low-end boom with these, they’re excellent all-rounders and ideal for beginners. Taylor Swift herself is fond of Taylor’s Grand Auditoriums.

Ah, now we’re on more familiar ground. Dreadnoughts are what most people see in their heads when they think of acoustic guitars, and for good reason. Musicians from Kurt Cobain and Thom Yorke to Harry Styles and Father John Misty have at least one of these boxy six-strings in their arsenal.

These beasts sound full (some might say “boomy”) and with the right amount of bass to complement the human voice. The cons? Dreadnoughts aren’t great for those who have a light touch or play with their fingers—they won’t be loud or rich enough. Also, they run about 16 or more inches wide and have thick sides, so fair warning to young or petite players.

Jumbos are curvy, hourglass-figured guitars, like concerts and auditoriums except way larger—we’re talking at least 17 inches across their width. Most of us would find them more manageable when strapped on and played while standing, so size certainly matters in the case of jumbos. Jumbo players are typically strummers who prize the guitar’s powerful, bassy and room-filling sound. Or they’re just big dudes.

One last thing about body shapes and sizes

Scale length is as important as size, and these vary from instrument to instrument. The scale of a guitar refers to the distance from the nut on the neck to the saddles on the bridge. Long-scaled ones measure about 25-and-above inches, and create more tension and tautness on the strings—that, in turn, results in a louder and punchier tone. Coming in at under 25 inches, short-scaled models have strings that are looser and easier to bend, yet have neither the volume nor punch of a longer scale.

Compared to electric guitars, the wood used in acoustic guitars—referred to as “tonewoods”—more significantly shapes their sound. Before you plunge into the deep end of Google searching for exotic materials, however, you should get to grips with the basics.

Of the many parts of an acoustic guitar—the neck, fretboard, body, and so on—only the top of the body really matters. And rightfully so, it’s called the guitar’s “soundboard.” The woods used for the sides, back and neck of the instrument are also agents of tone, but they shouldn’t influence the purchasing decision, especially if you’re only starting out.

All woods resonate differently, so the critical question to ask is: Do I want a solid wood or laminate guitar, or a combination of both? Solid wood is constructed from a single hunk of wood, resonates well, and is almost always pricier. On the other hand, the latter is built from pressed plywood, doesn’t resonate as well, and tends to be cheaper. But here’s the catch: Laminates are typically more durable, and can better withstand high humidity and frequent changes in weather.

As most well-known acoustic guitar brands—except for Martin—don’t even build a guitar with a laminate top, it’s helpful to familiarize yourself with the forest of soundboard tonewoods.

The most common tonewood for soundboards, spruce predominantly comes in three varieties: Sitka, Engelmann and Adirondack. They’re generally light, pale and durable, without a heavily figured grain that screams “I’m expensive!” No matter the species, spruce-top guitars tend to sound crisp, clear and straightforward, making them suitable for any genre. A no-nonsense spruce-top guitar is probably where you want to start.

Another common material, red cedar is (wait for it) reddish-brown, soft and not quite as strong. It results in a darker and, some would say, “bell-like” tone as compared to spruce, which is why many fingerstyle players prefer cedar. Cedar-top guitars are, unfortunately, not ideal if you strum like Pete Townshend in his prime—they’ll lose quite a bit of clarity.

Widely deployed as the sides and backs of acoustics, mahogany is a dense wood that balances the soundboard wood by adding definition. When used as a top, the deep brown wood offers a quiet but punchy sound that evolves from bright to rich over the years you play it.

We’re now approaching high-end territory. The honey-hued Hawaiian hardwood is renowned for its beautiful grain and bright, punchy tone. If you’ve been enchanted by a koa-top model’s good looks, do yourself a favor and audition it—you might find the sound too over the top.

On to the ka-ching question. Since you’ve chosen an acoustic over an electric as your first guitar, be prepared to spend more on a decent instrument. At least you don’t need an amplifier and all those confusing cables. The ballpark of $800 should be your upper limit, and $200 the minimum. Anything below that is unlikely to sound good or be well constructed.

If you must have a new solid-top Gibson or Martin acoustic, though, then you’re looking at north of $1,000, the exception being the latter’s ‘junior-sized’ models. Frankly, you don’t need the premium stuff to learn the basics.

At just shy of $800, the Taylor 100 series should be your first stop. They come in auditorium and dreadnought sizes, pair solid Sitka spruce tops with laminate sides and backs, and have the bonus of in-built pickups. Plug one into an amplifier, crank up the volume and hear your neighbors banging on your door.

Breedlove’s Solo and Pursuit series also fall within this price range. The former has red cedar tops and comes in dreadnought and concert sizes, while the latter adds mahogany tops as an option for its parlor (smaller than concerts), concert and dreadnought models.

Fender’s Paramount series—models come in parlor, auditorium and dreadnought sizes—only uses solid woods for tops, sides and backs. Needless to say, these guitars are pretty good bang for your buck, especially if you’re a beginner.

Models from Martin’s X series make an appearance in this range, too. But don’t be fooled by their lovely grain patterns. A few models use laminate tops, which means that grain you’re salivating over is merely a photo of wood and not the real deal.

Don’t discount the models from Ibanez and Yamaha. The brands may be known for their electrics and classical guitars, respectively, but their sub-$400 acoustics are workhorses that’ll do the job just fine.

Other popular acoustic brands at this price point include Washburn, Seagull and Epiphone. The latter’s Hummingbird and Dove models are perfect if you’re gunning for a Gibson but don’t want to hemorrhage your bank account.

If you scrounge around, it’s not uncommon to find old, solid-top models from Fender and Ibanez for less than $200. Cort is another brand, from South Korea, that delivers value for money. Check out its Earth acoustics, whose all-solid-wood construction and quality hardware belie their price tags.