Nashville session ace Jerry McPherson and Grammy-winning producer Jacquire King team up to show you how to make your acoustic guitars sound better than ever. 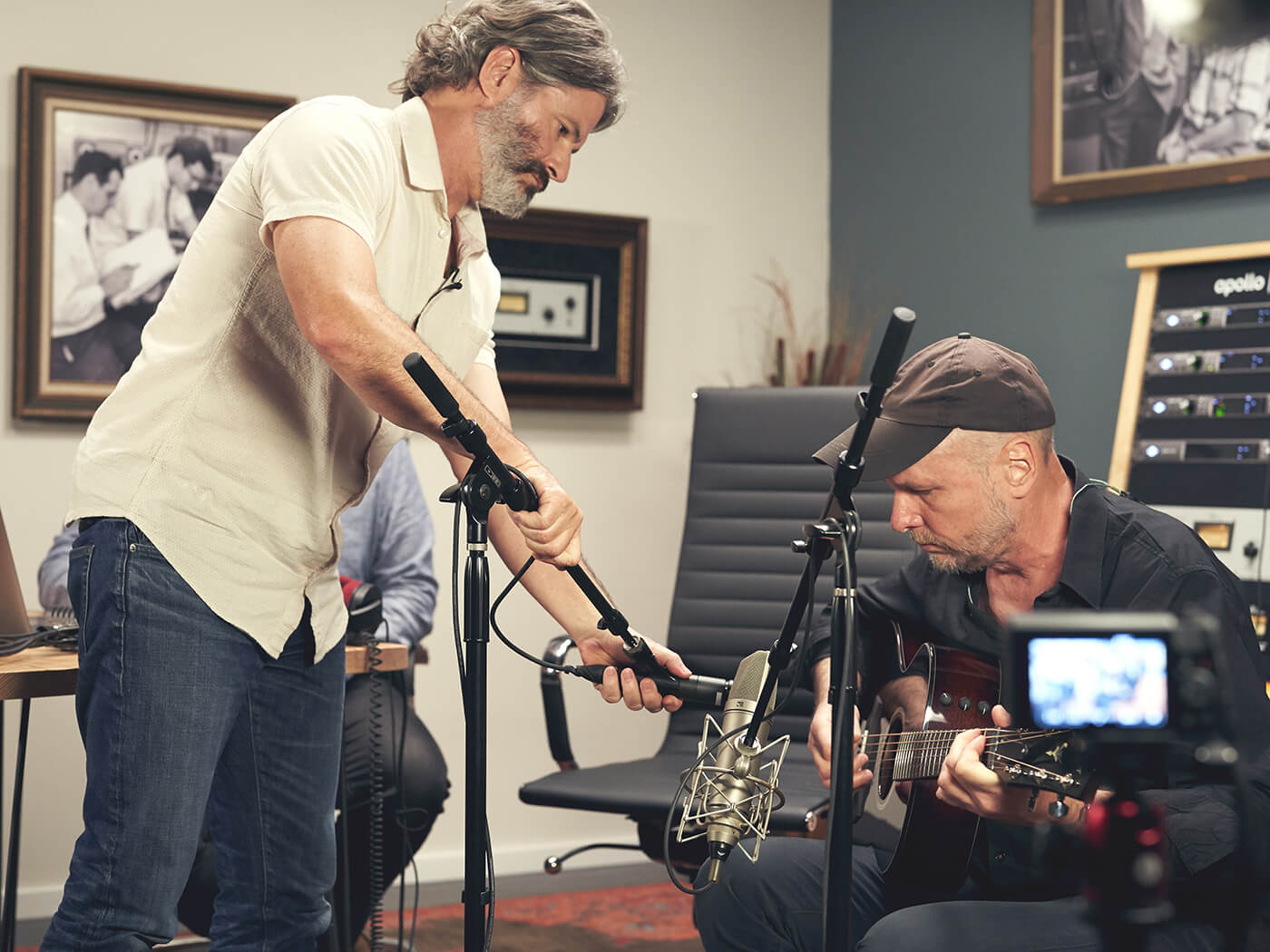 Anyone who’s tried to record an acoustic guitar knows that there’s a strange mix of science and mojo involved in getting everything just right, but when you do it’s akin to alchemy. Two people who know a thing or two about getting wonderful, warm and expressive acoustic guitar sounds take after take are Jerry McPherson and Jacquire King – and they’re here to help.

A-list Nashville sessioneer and Taylor Guitars artist McPherson can be heard lending his magnificent chops to hits by Kelly Clarkson, Tim McGraw and Faith Hill, while producer King has won Grammy awards on three separate occasions, for his work with Tom Waits, Buddy Guy and Kings Of Leon.

Between them, the pair know a thing or two about great sounding acoustic guitars, and so it’s understandable why Universal Audio got the pair together as part of their UAD Tones & Techniques series to teach you all about mic’ing acoustics in the studio.

With that in mind, what better time to pick the brains of Jerry and Jacquire to see what other advice we could glean about recording, gear and playing from two seasoned pros…

What do you look for when you are selecting an acoustic guitar for recording?

“There are a lot of things on an acoustic guitar that can rattle and buzz, which is not a big deal in a live setting but can ruin a good take and make it unusable in a song. Even if a guitar is set up properly, things such as the strings behind the nut ringing out can be a problem. So I always take some foam or material that I can weave through the strings to quiet them.  Another thing I look for is that the guitar plays in tune up and down the neck. If the guitar is out of tune it can knock a zero off of the value of it. A $2,000 instrument will sound like a $200 instrument! ” 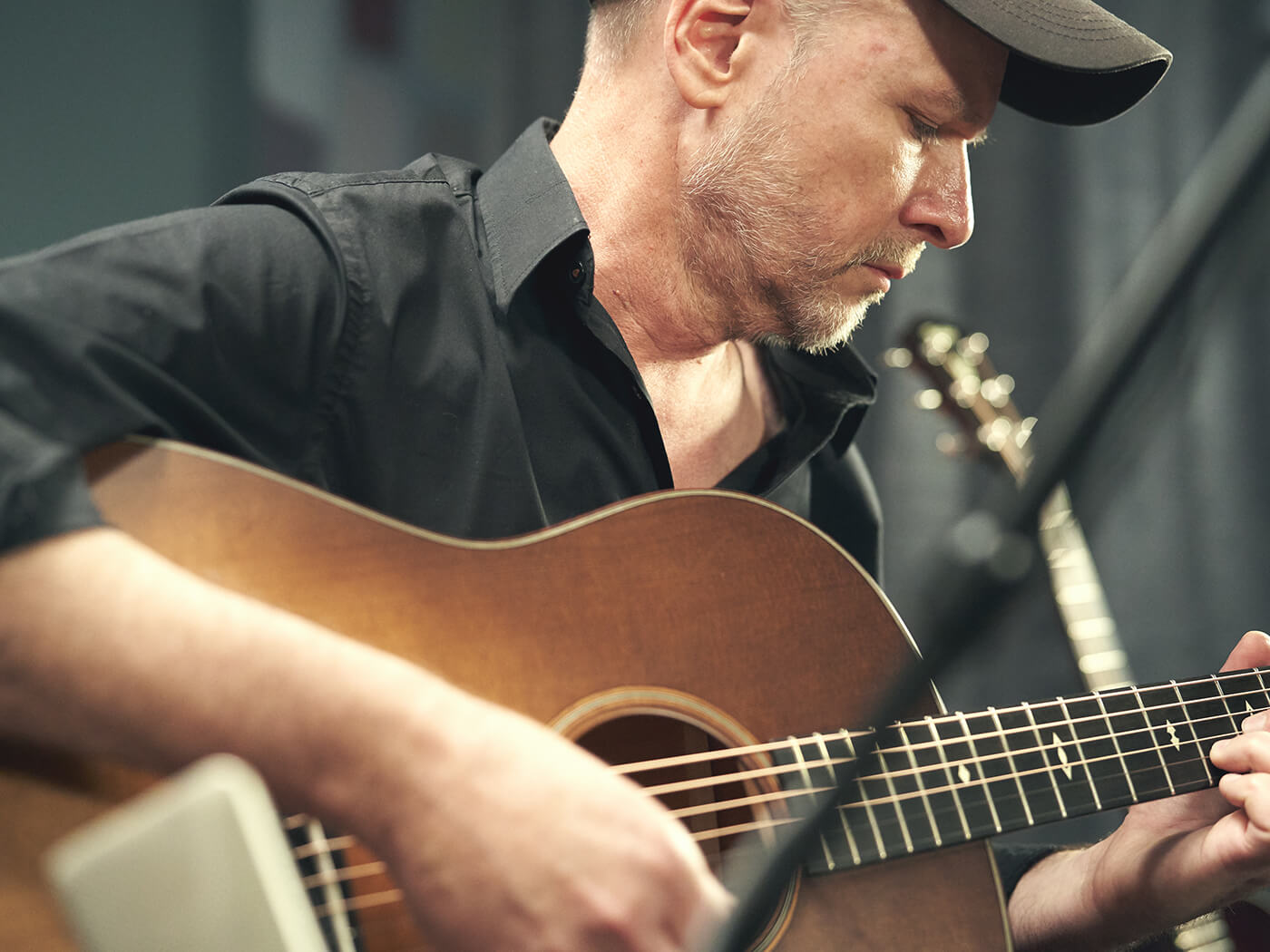 The session world is obviously hugely demanding and competitive, what are the keys to standing out in that environment and getting calls for the really big gigs?

“There’s a lot of skill sets needed to be a session player. One is to recognize that your goal is to make the artist and the song sound the best that they can sound. It is commonly said that we are in a service industry. It’s true. We are not there to make ourselves look good; we are not the artist. But we can bring artistry in what we do.

Another skill set is to have a wide vocabulary of styles, approaches, sounds, etc. that we can use to bring the song to a finished production. I learned a lot from live touring and having to learn and play parts off of records that were played by someone else. They may have only played it once in the studio, and then I played it hundreds of times in rehearsals and shows. Having to play someone else’s parts that many times will certainly stick with you and help build that vocabulary that you can use on sessions.

What’s the essential gear that you always take with you to a session?

“ I like to bring a variety of guitars. I’ll always have a vintage-style acoustic with me for that warm, dry wood, midrange that a lot of producers want hear. I’ll also make sure I bring a new, more modern instrument in case of the track calls for that. Also, a lot of artists that play guitar perform on newer guitars and are used to that sound. If they have a good sounding acoustic with them, sometimes I’ll ask to play that. It’s a familiar voice that can help them feel more comfortable with the sound of the track.

“  A variety of guitar picks for different sounds, several capos, guitar tuners, tools for emergency guitar repairs and tweaks, and of course spare strings and string winders. It’s always safe to assume that things break, so spares of anything that, if out of service would be a dealbreaker, is a smart thing to pack.” 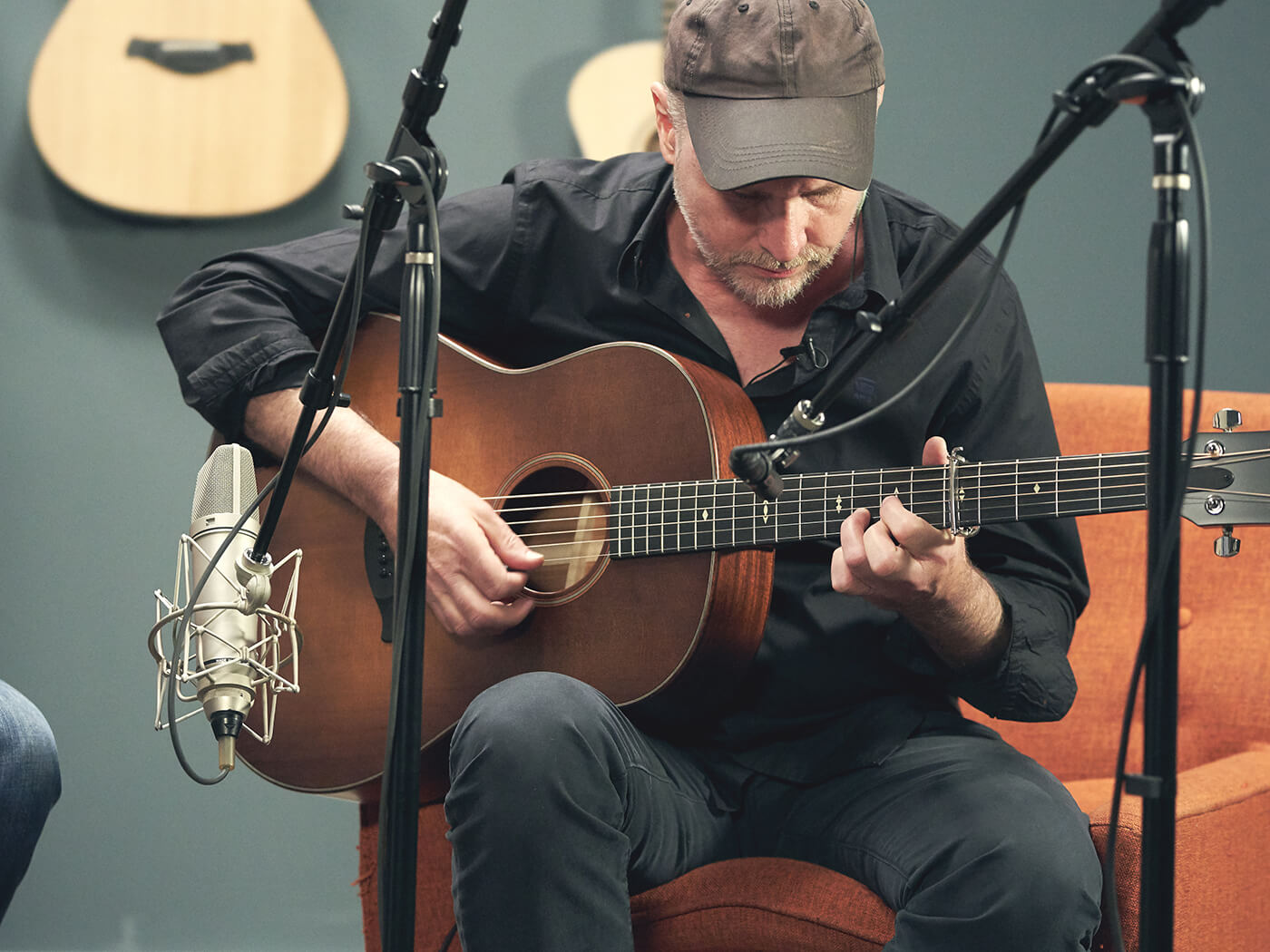 What would you say are the most common mistakes that guitarists make when trying to record acoustic guitars?

For home recorders, room choice is going to have a huge impact on the way their acoustics sound, what environmental factors should they be aware of when recording?

“I used to think that a room that was pretty dead was the way to go. But I’ve since had producers and engineers tell me that they prefer to have a room that has some liveliness to it. For me, the biggie is to make sure that outside and inside noises aren’t creeping into the microphone. Cars passing by, planes overhead, dogs barking, along with central air fan noise and refrigerators all get exaggerated by compression and EQ.

It may be passable at the time you record it, but later at mix time, those effects can bring out the worst in your guitar pass. A lot of times I monitor (but not record) a good bit of compression to make sure I’m not laying down a noisy take.

Mic choice is obviously a big thing, what types do you think will give that warm, natural acoustic tone?

“Personally I record in mono with an AKG 414. After shooting out several mics, it gave me the mids that I was looking for. My preference in guitar tones is probably different from most acoustic players. I view acoustic tone in how it relates to a rhythm section, as opposed to getting a solo acoustic sound. Those two sonic approaches are very different to me. If you are doing a solo acoustic project then you’ll need the silky top, warm prominent low end, and stereo imaging to carry the performances. But in session work, those characteristics can get in the way of other instruments. I also will use ribbon mics such as a Royer or a Coles if the sound needs to be super warm and vibey. ” 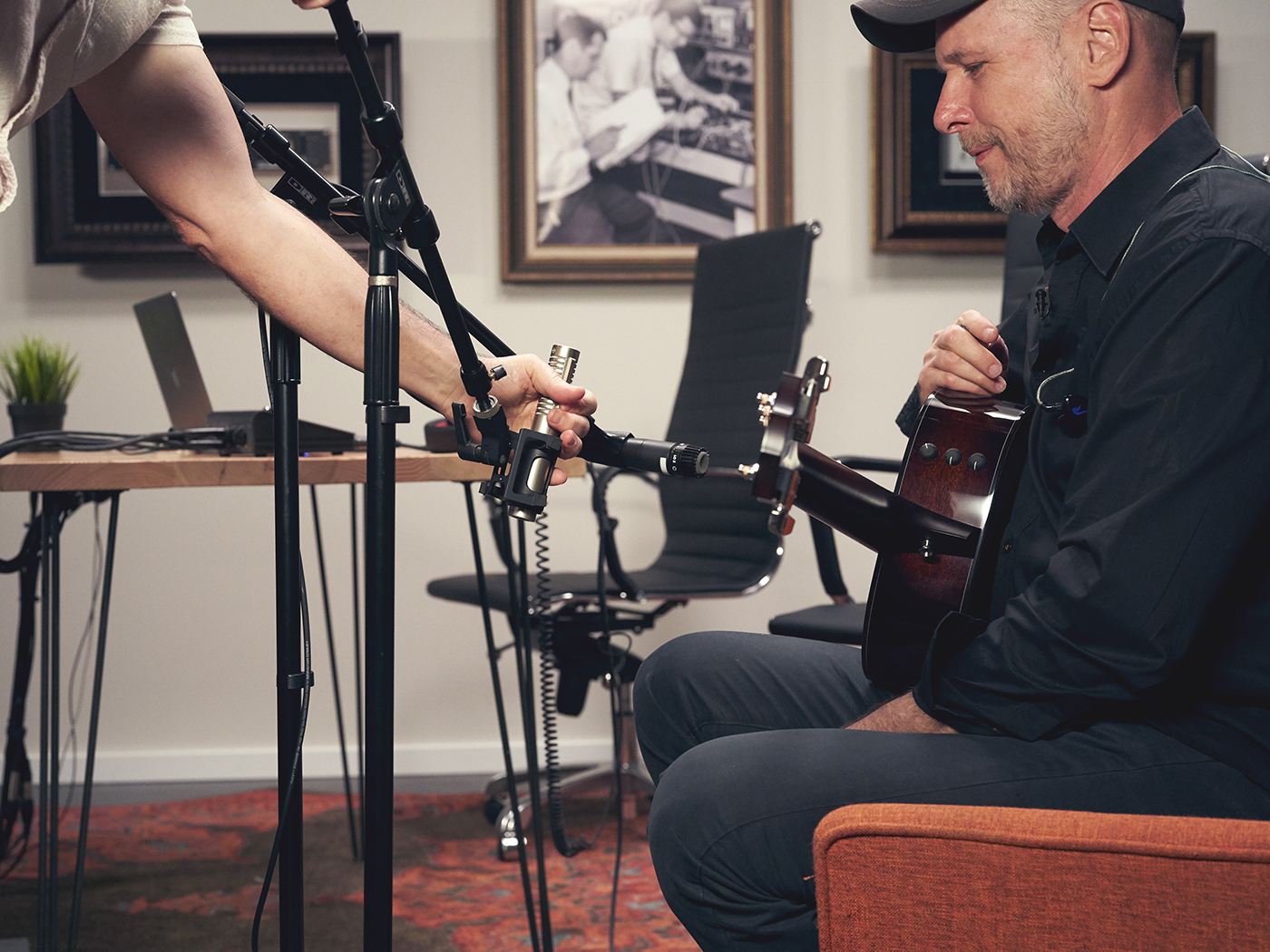 Mic placement is obviously another massive area of debate. What’s your preferred placement?

“I’ll have to answer with the typical scenario – I’ll have the mic anywhere between five to six inches away from the guitar and pointing just above where the neck joins the body. So if it’s a 14-fret guitar, it will be facing the 13th fret. But there are so many factors that can affect that setup- the instrument might be boomy or bright, so that will affect both the distance and where the mic is facing. Also, if more room sound is desired, I’ll move back more from the mic. ”

What’s your favourite acoustic tone that you’ve captured in your long and varied career?

”When I’ve worked with mega-engineer Chuck Ainlay, he’s used a stereo pair of DPA 4011-TL microphones. Those sounded amazing! One my own, I recently started using a UA Apollo interface along with using the V76 preamp plugin and their 1176 compressor. So good! The UA plugins go beyond how something sounds and gets into how it feels both playing and listening back to it. I’ve heard about UA plugins for years and I’m glad that I’m finally getting to experience what other users have been talking about all this time. 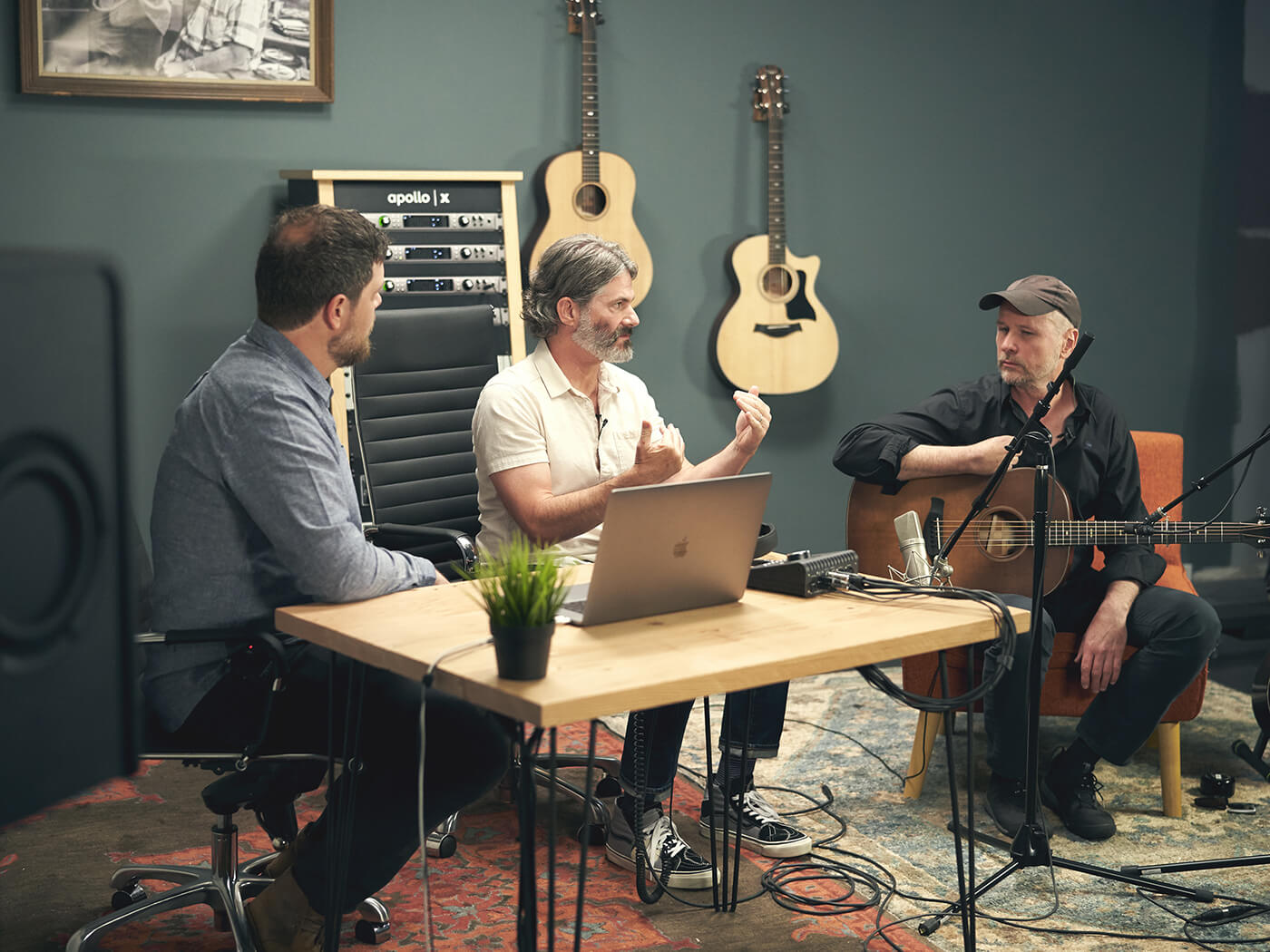 Finally, do you have any tips or tricks that you’ve learned over the years that our readers could use to give that extra little bit of quality and professionalism to their acoustic recordings?

“There’s several things to keep in mind. Start with a good sounding, well-maintained instrument with a quality microphone and good mic pre. Not much of a tip, but it’ll keep you from wasting time trying to get excellence out of less than excellent gear. Make sure it’s in tune, and that the performance is in the pocket with the other players. Sometimes I’ll make sure I have dead strings if the song is more organic and needs more vibe. Then other times I’ll use fresh new strings if the sonic picture needs a beautiful, sparkling sound.

Also (and especially in the case of stereo mic’ing) I’ll make a mental note of where my guitar is positioned in relation to the microphone when tracking. The worst thing that you can do is go in to punch an acoustic pass and be ‘out of position’ with where you were originally. The sounds will never match and you’ll have to start from scratch! I’ll use a pencil to help remember the placement. I’ll lay it parallel on top of the mic and slide the pencil towards me to where the eraser touches the guitar. 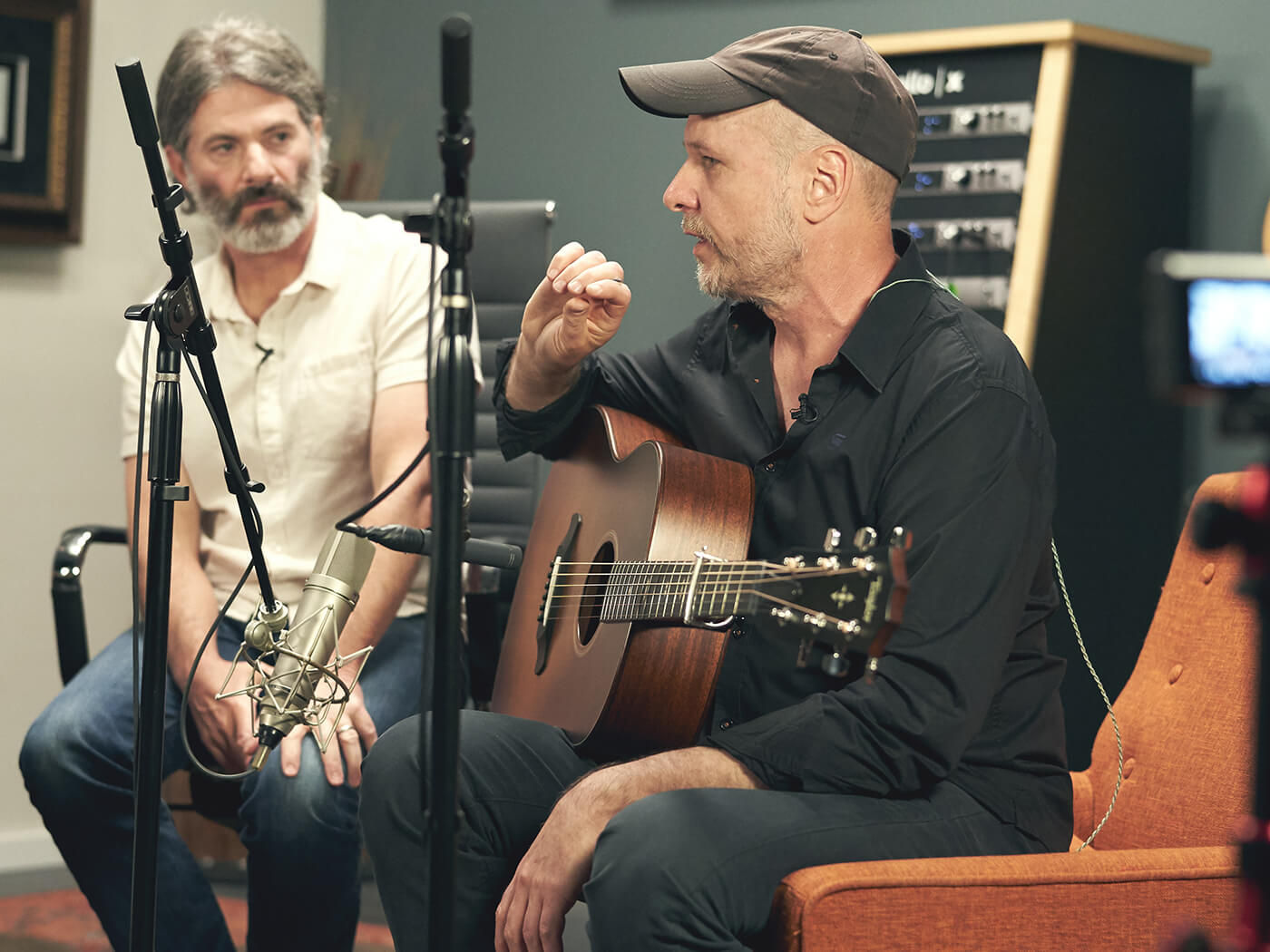 “Now I can see where the mic is ‘looking’ at the guitar and make a mental note of the distance between the guitar and mic capsule. Sometimes I’ll use my thumbnail to make an indentation on the pencil to mark the distance. The last thing you want to hear from the engineer is ‘Have you moved from where you were before?’ There’s some in the trenches survival tips. Good luck!”

What do you think are the most important qualities for a guitarist to bring when they’re coming into your studio to record?

“ I would say that it’s being prepared in terms of having a selection of guitars that can go to different tones, those guitars being well set up and not having intonation issues. A good selection of pedals on their pedalboard that include overdrive, reverb, and delay, plus whatever else fits their personal style. Selection of picks and a capo, a good tuner…

“Sometimes it’s being familiar with the songs so that there are existing ideas for parts that can be adapted or expanded on. In the case of a session musician, they are more comfortable coming in without much familiarity and just coming up with stuff in the moment. Regardless and in either case, it’s about the ability to be fluid and get creative.” 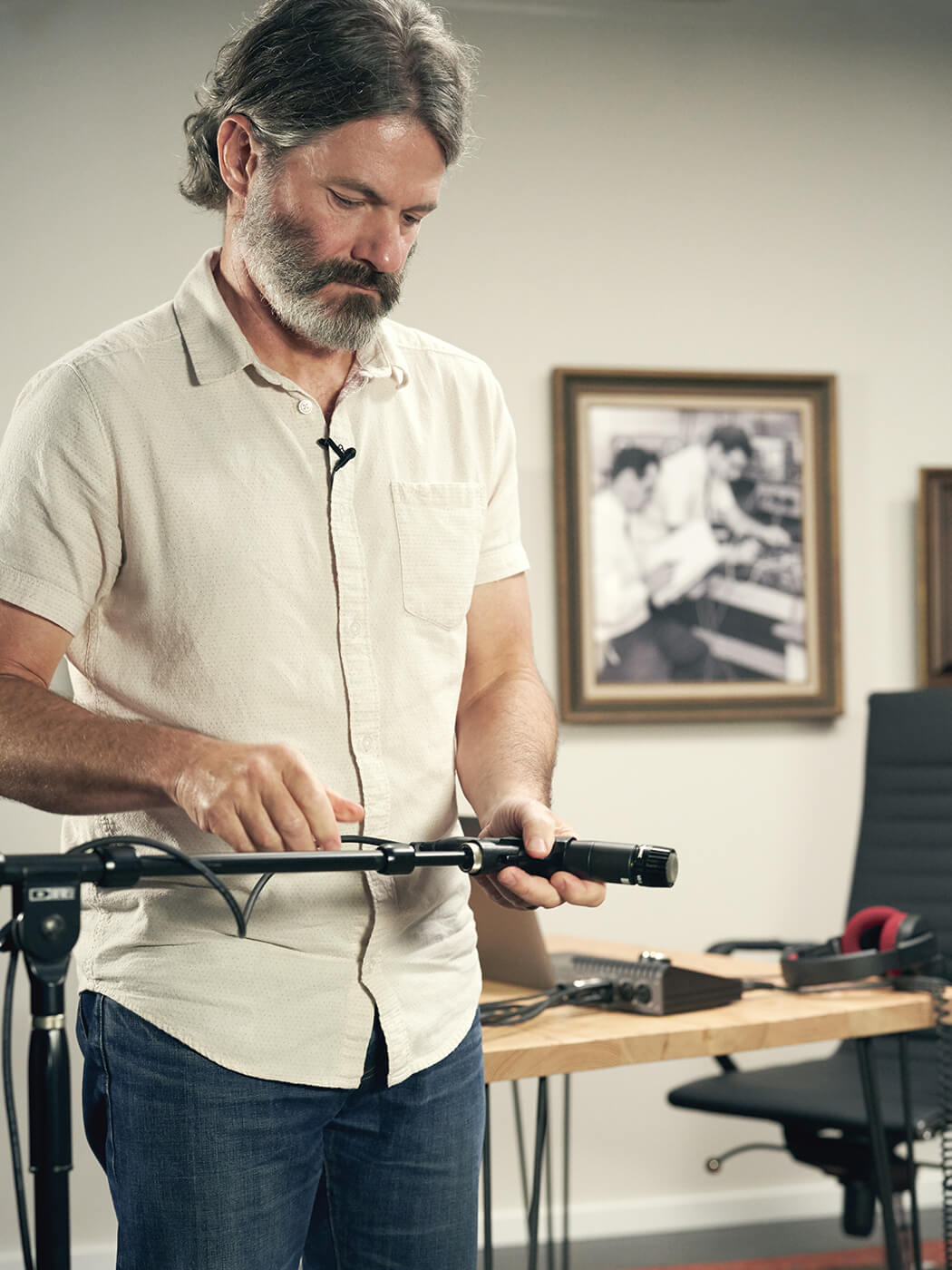 As a producer, how involved do you like to get with what the musicians you’re working with are doing – is it a case of letting them do their thing, or more of a collaborative situation?

“I get involved in parts and sounds but always let the musician lead. If they have ideas and sounds, then I follow that and engage and modify as I think we need to; otherwise, I let them be themselves. Great music is the culmination of people combining their inspiration.”

What would you say are the most common mistakes that guitarists make when trying to record acoustic guitars?

“Playing too hard and not thinking about pick selection! Try different picks as it makes the most Larger diaphragm condensers are typically the best place to start for an overall sound that captures the whole tonal range of the instrument.” 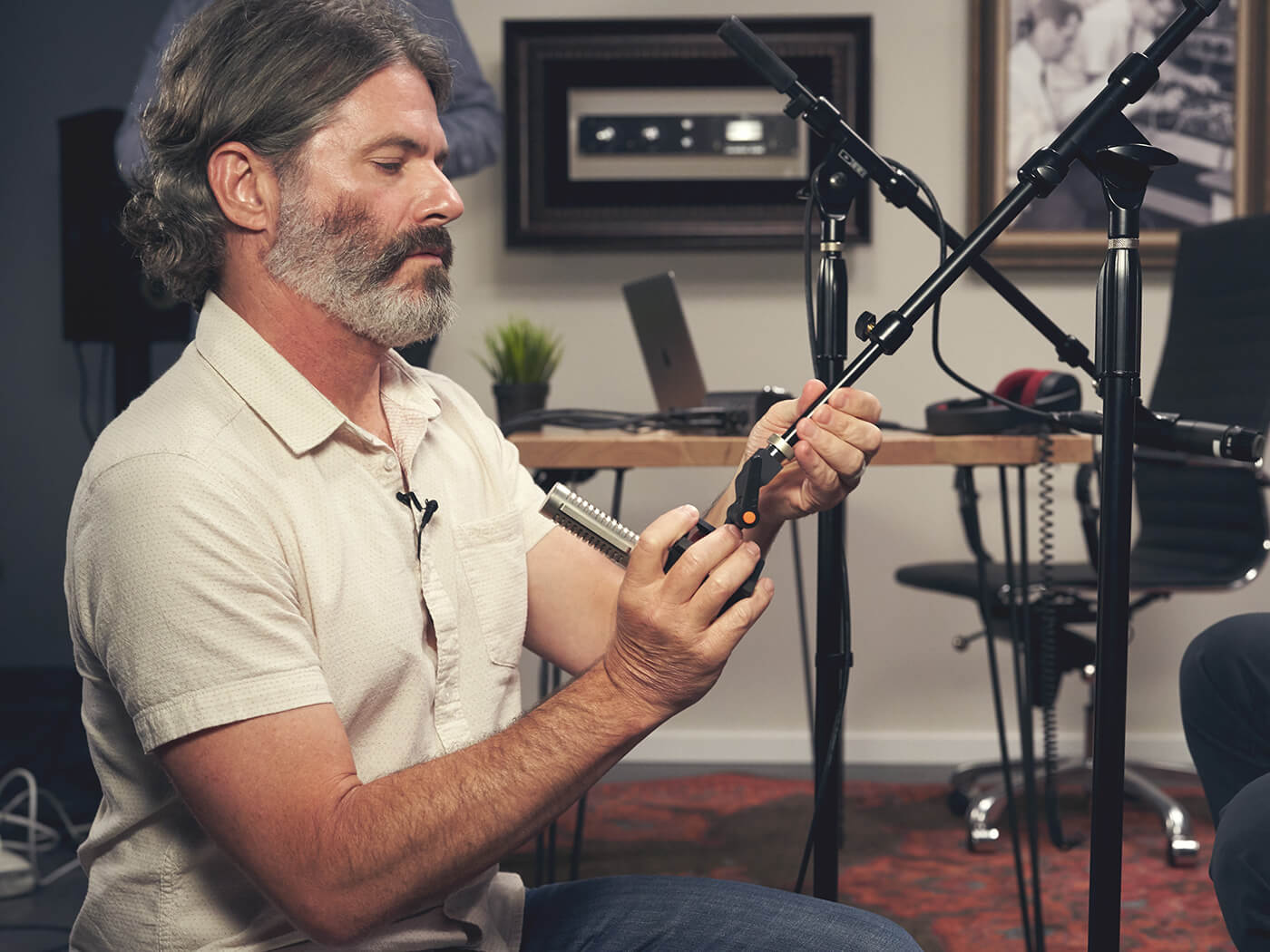 For home-recorders, room choice is going to have a huge impact on the way their acoustics sound, what environmental factors should they be aware of when recording?

“Most importantly it’s about choosing a space that is appropriate to the sound. Less ambience is generally the rule, but rules are also meant to be broken.”

Mic placement is obviously another massive area of debate – what’s your preferred placement?

“It’s dependent on many factors but somewhere between the soundhole and the 12th fret is the place to start, and about six to eight inches away from the guitar. I put my ear in front of the player and see where I get the best balance to start and adjust from there.”

For more recording tips from Jerry and Jacquire, check out the Universal Audio blog.