All About… Jimmie Webster

Much of the iconography of vintage Gretsch guitars came from the company’s greatest ‘travelling ambassador’. Huw Price taps into the Jimmie Webster story… 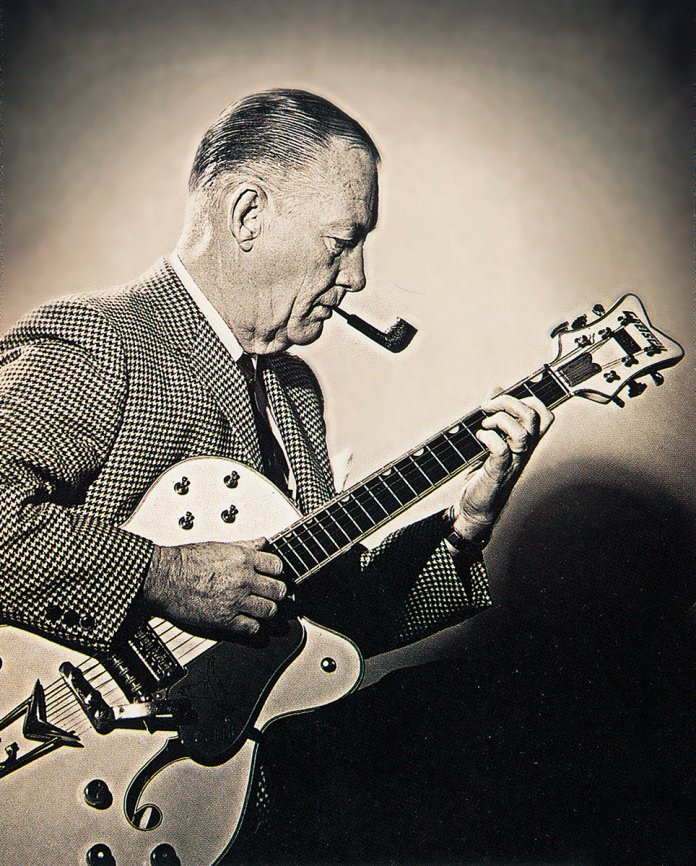 Gibson had Ted McCarty, Fender had Leo, and Gretsch had Jimmie Webster. They were all ideas guys, but Jimmie was that bit different, because he was an accomplished guitarist, but no engineer. Over four decades with Gretsch, Jimmie came up with some of the company’s most iconic, weird and notorious innovations. Jimmie was born into a musical family on 11 August, 1908 in Van Wert, Ohio. He grew up playing piano but also developed a keen interest in guitar, and by the 1930s, he was a professional guitarist working with Woody Herman and Count Basie. He also ran a music shop and tuned pianos, and by all accounts was very good at it, because his services were in great demand.

Jimmie had done some work as an agent and demonstrator for Gretsch before the war, even appearing in a 1940 guitar-method brochure with a DeArmond-equipped Gretsch Synchromatic. The brochure described the playing style Jimmie had developed as the ‘Gretsch-DeArmond method for electric Spanish guitar’.

Jimmie had attended a DeArmond pickup (or ‘mike’ as they were then called) demonstration, where tapping strings against the fingerboard to create notes was used to show its sensitivity. He realised that he could adapt his two-handed piano-playing abilities to guitar, and devised an eight-finger playing style based on tapping. Chords were played by hammering on with the left hand to create the rhythm and his right-hand tapped out the melody on the upper frets. Calling it the ‘Touch System’, Jimmie promoted it for decades and genuinely believed it would eventually become mainstream.

Even with Chet Atkins producing his album Un’a-bridged in 1959, Jimmie’s prediction of “universal adoption by guitarists everywhere” proved a tad over-optimistic. Listening to the album now is much like listening to early Les Paul recordings. The playing is technically accomplished and inventive, but they sound more like novelty records. By the time Van Halen repopularised tapping, Jimmie had passed away. 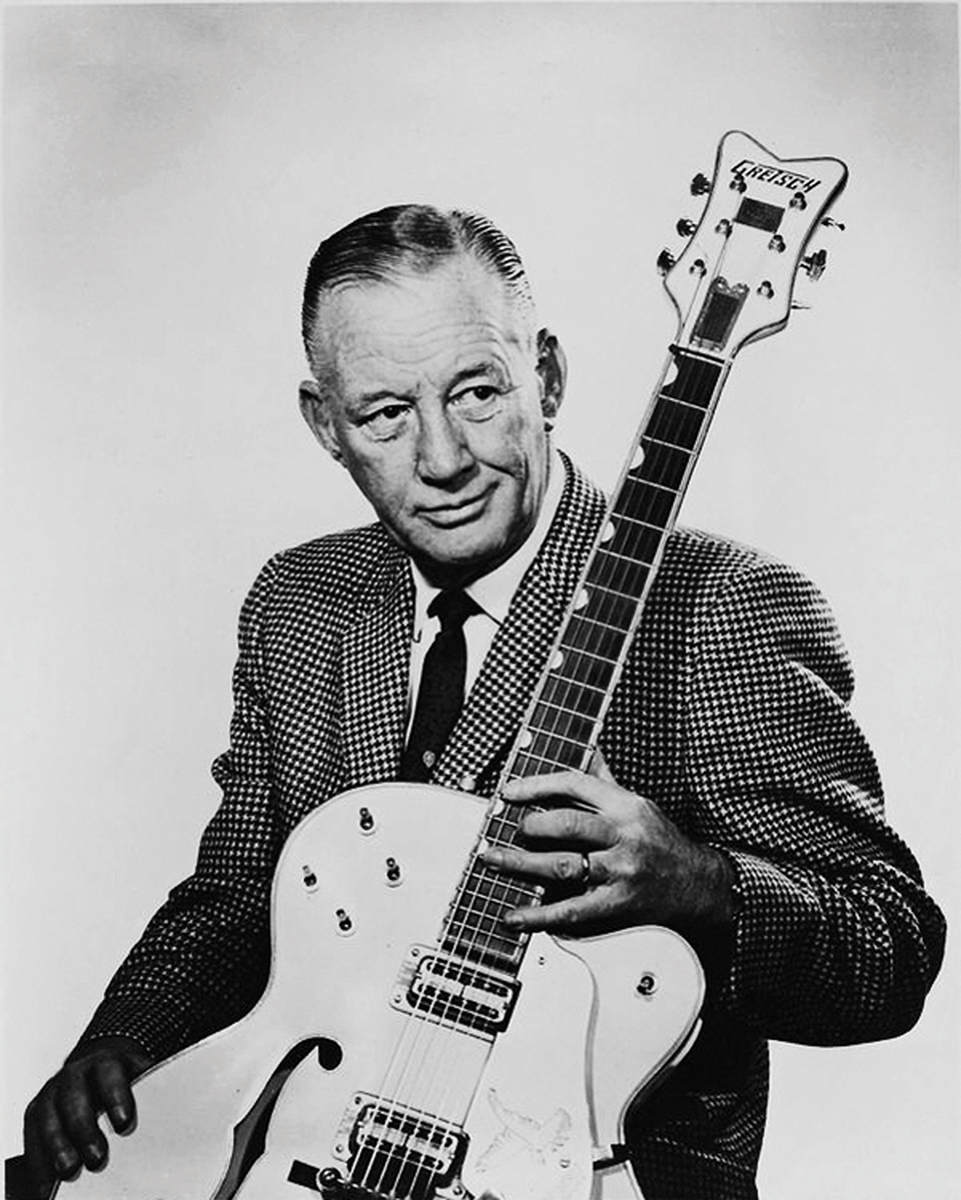 The Second World War intervened and Jimmie served as a musician in the US Air Corps. He became more involved with Gretsch on his return, but always insisted on remaining freelance, juggling three days per week at Grestch’s Brooklyn factory with two days of piano tuning. In 1951, Gretsch held a three-day promotion in New York to launch a new range of electric cutaways to compete with Gibson. Jimmie’s role had become that of ‘special representative’ and he was by then Gretsch’s main demonstrator – travelling the US and appearing on radio and television to promote Gretsch guitars and his technique. However, Jimmie wasn’t as well known as Les Paul, and he recognised that Gretsch needed a big-name endorser to compete with Gibson.

In 1954, he approached Chet Atkins, but found him reluctant. Chet was happy playing his modified D’Angelicos, but Jimmie talked him around with the promise of a signature model that he could help design. The 6120 was launched in 1955, complete with DeArmond pickups and Western motifs, which included a ‘G’ branded onto the body like a prize steer. Some of these ‘Western’ features had been tried on the 1953/54 Round-Up and Gretsch figured they would be appropriate for the 6120, too. The New York jazz-guitar manufacturer’s attempts at countrifying his guitar must have felt patronising to Chet. Country to the core, he had no need for horseshoe and cactus inlays. We can see his point, but many Gretsch fans love the cowboy kitsch. The whole thing has the whiff of Jimmie about it, and he’s directly credited with the idea of spraying the 6120 orange. 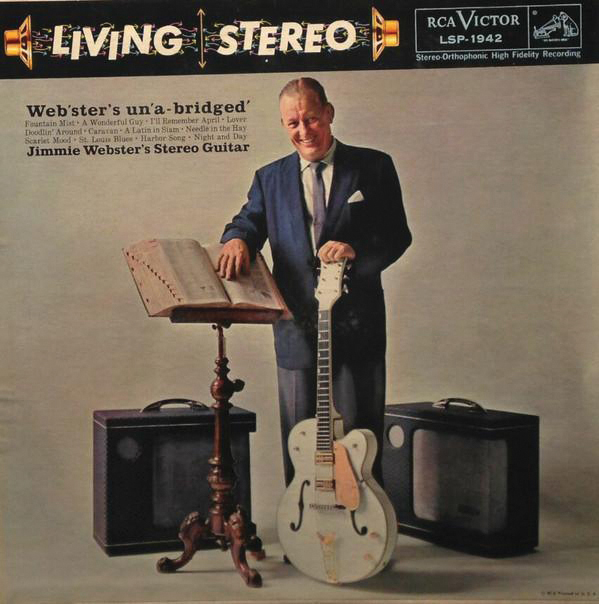 1954 saw Jimmie’s design ideas coming to the fore on other models. Gretsch drums were held in very high regard and when visiting the factory, he noticed the plastic sheet material that was used to wrap drum shells. He suggested covering guitars with it and before long, Gretsch had the sparkly Silver Jet. Gibson was offering gold and black finishes and Fender was only offering solid colours on a custom-order basis, so Gretsch responded with two-tone finishes, yellows, ivory, copper, Cadillac Green, Jaguar Tan, Smoke Green and more. But the most visually arresting of all Gretsches was Jimmie’s brainchild.

Jimmie set about designing the glitziest, flashiest and most eye-catching guitar possible. Combining a white finish with gold hardware, ‘jewel’ encrusted knobs and gold-sparkle binding, Jimmie’s daughter Jennifer maintains that her father named the ‘White Falcon’ after the Forces newspaper he featured in during the war. Released in 1955, the guitar is regarded as the ultimate expression of 50s Gretsch-ness by many fans.

A PROJECT TOO FAR

Jimmie was so enthusiastic about the Touch System technique that he directed product-design efforts at Gretsch into creating a stereo guitar and amplifier set-up catered for his style of playing. Working with Filter’Tron inventor Ray Butts, a pickup was devised that split the signals from the upper three strings and the lower three and sent them to separate amplifiers. Jimmie called this innovation ‘Project-O-Sonic Stereo’, for “Stereophonic, BiAural Sound Projection and Disbursement”. Various Gretsch models were produced with Project-O-Sonic electronics, including the While Falcon, Country Club and Anniversary. Sadly, it was doomed to commercial failure, because customers had to commit to buying the whole guitar-and-amplifier package and, more importantly, Jimmie’s Touch System never really caught on.

It’s reported that Jimmie and some of his Gretsch colleagues took a lot of their marketing ideas from the automobile industry. During the early 50s, car manufacturers would try to maintain demand for established models by introducing new colours and features every year. Keeping things fresh was one of Jimmie’s main concerns, and he was dedicated to coming up with new ideas. Gretsch had been buying outsourced pickups and bridges, and Jimmie was keen for those items to be manufactured in-house. He worked closely with Ray Butts to develop a production version of the Filter’Tron humbucker and Jimmie’s Space Control bridge replaced the Melita type. 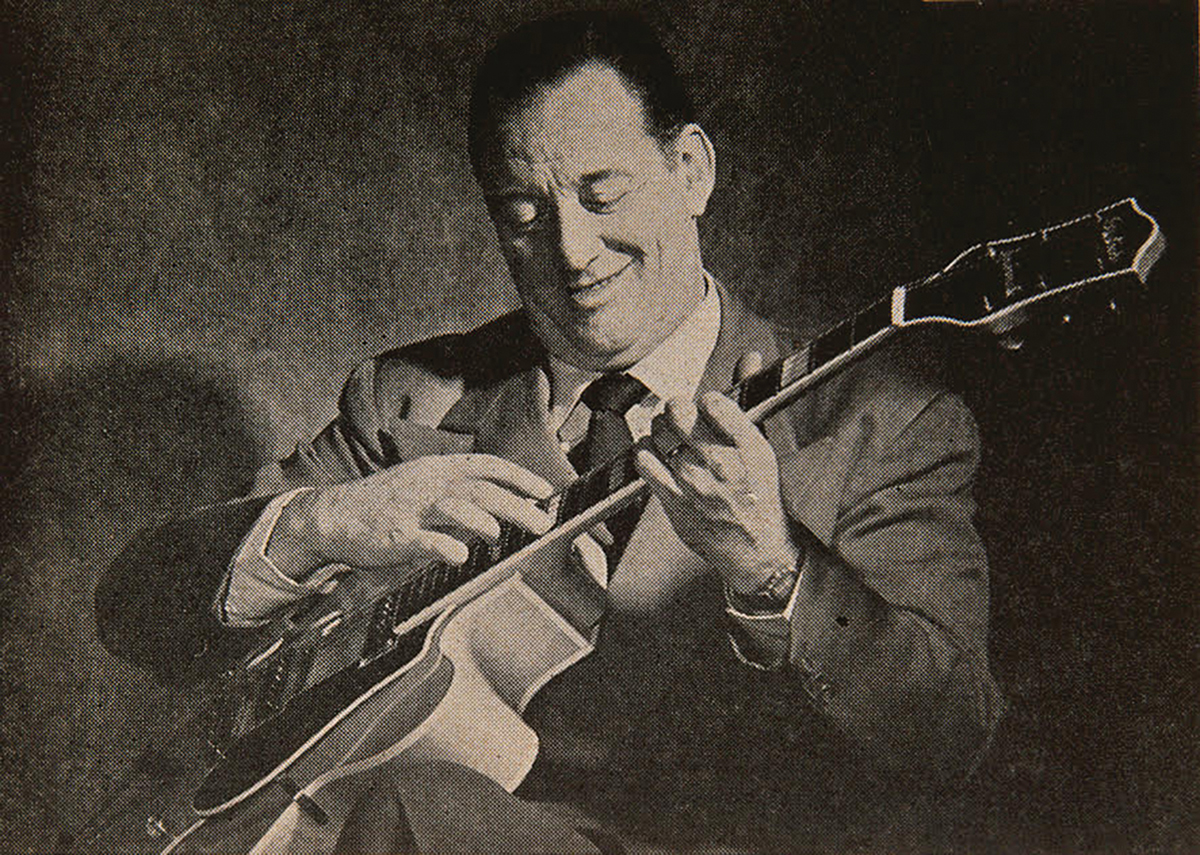 Rather bafflingly for a piano tuner, Jimmie considered it more important for players to be able to adjust string spacing than intonation. Space Controls featured on Gretsches across the product range for years to come, but they can be prone to unwanted noises and have less sustain than Gretsch’s bar bridges. Neoclassical thumbnail fretboard markers proved to be one of Jimmie’s more successful ideas – these have since become a quintessentially Gretsch feature. His standby switch can come in handy, too, but his padded plastic backs and mechanical string-dampening system are held in lower regard.

The same can be said for T-Zone Tempered Treble, which involved slanting frets beyond the 12th fret to improve intonation and the woeful Tone Twister (aka String Breaker), which was a budget vibrato device with a small lever that clamped across the strings in the area between the bridge and tailpiece.

Jimmie’s most notorious ‘innovation’ was the Floating Sound Unit, which was seen on various models from 1966 onwards. It comprised a three-bar frame positioned where the bridge would normally go. A 440Hz tuning fork was screwed onto the underside and projected through a hole in the top of the body, with the strings threaded through the bars. Designed to improve sustain and enhance upper partials, the unit only works if carefully set up to transfer vibrations to the back of the body. Set incorrectly, the tuning fork sets off all sorts of wolf tones. The unit also made it impossible to set the intonation, and most players simply remove them, reposition the bridge and learn to live with the hole. 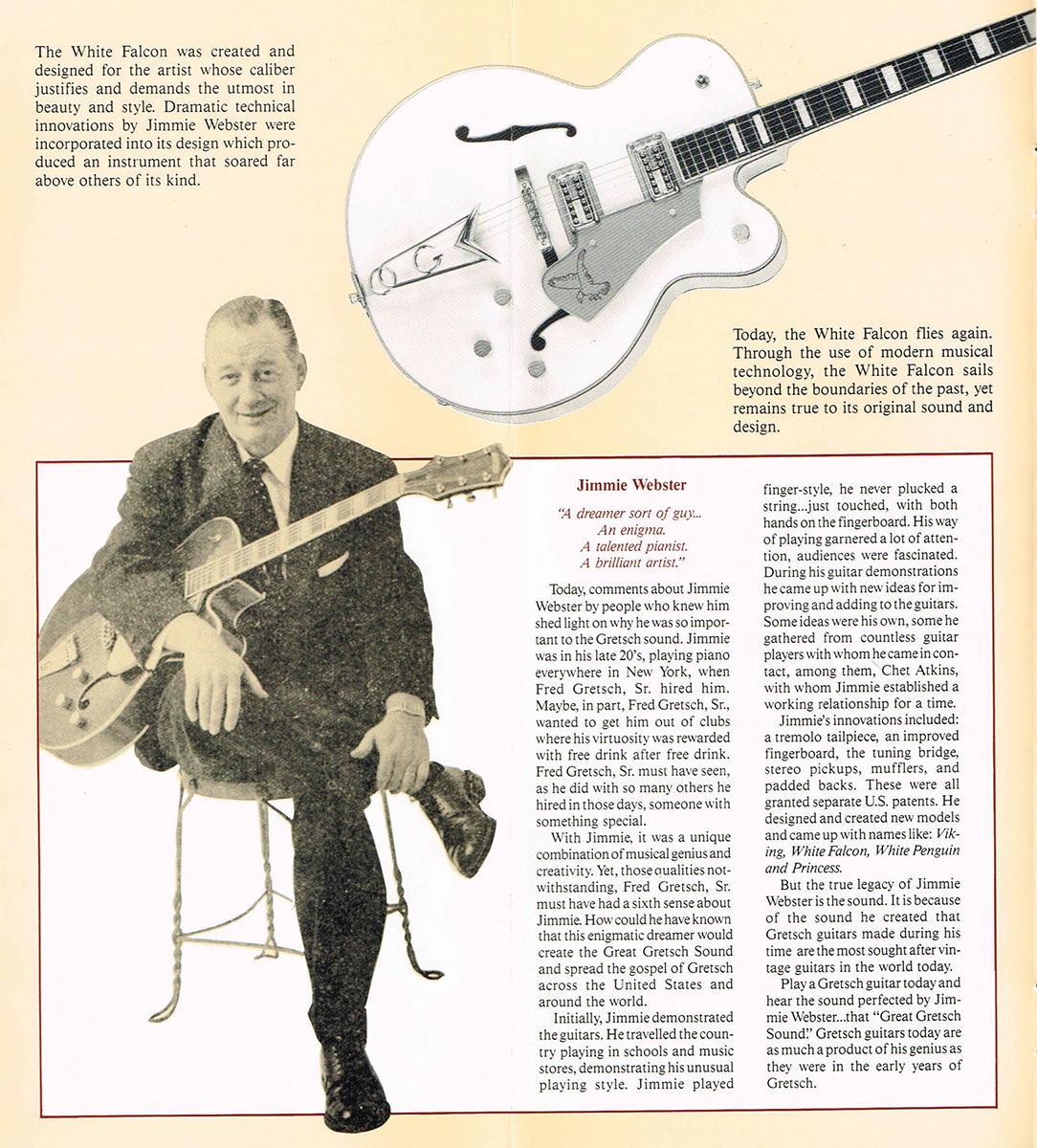 Jimmie was also around while Gretsch was transitioning to thinner double-cuts with f-hole transfers and is credited with Gretsch’s belated move into solidbodies. He also created the seven-string George Van Eps signature. Although not all of Jimmie’s ideas proved popular, or even practical, he helped keep the Gretsch ball rolling for many years. Beneath the glitz and gimmicks, most Gretsch models were essentially pre-war jazz guitars. As such, they were already old-school in 1952 and by the mid 1960s, many models were unsuited to the high-volume blues-rock and psychedelia that dominated guitar music.

Jimmie continued working for Gretsch and performing his ‘Gretsch Guitarama’ shows after Baldwin took over the company, but in time, he began doing less and less, until he eventually drifted away altogether. Jimmie died in 1979, just before the revival of interest in Gretsch guitars, but one thing’s for sure – without Jimmie Webster, the Gretsch brand as we know it today wouldn’t exist.