Some guitarists get divorced more often than they change their string brand, and though they are just as integral to how we play and sound, plectrums can be much the same. 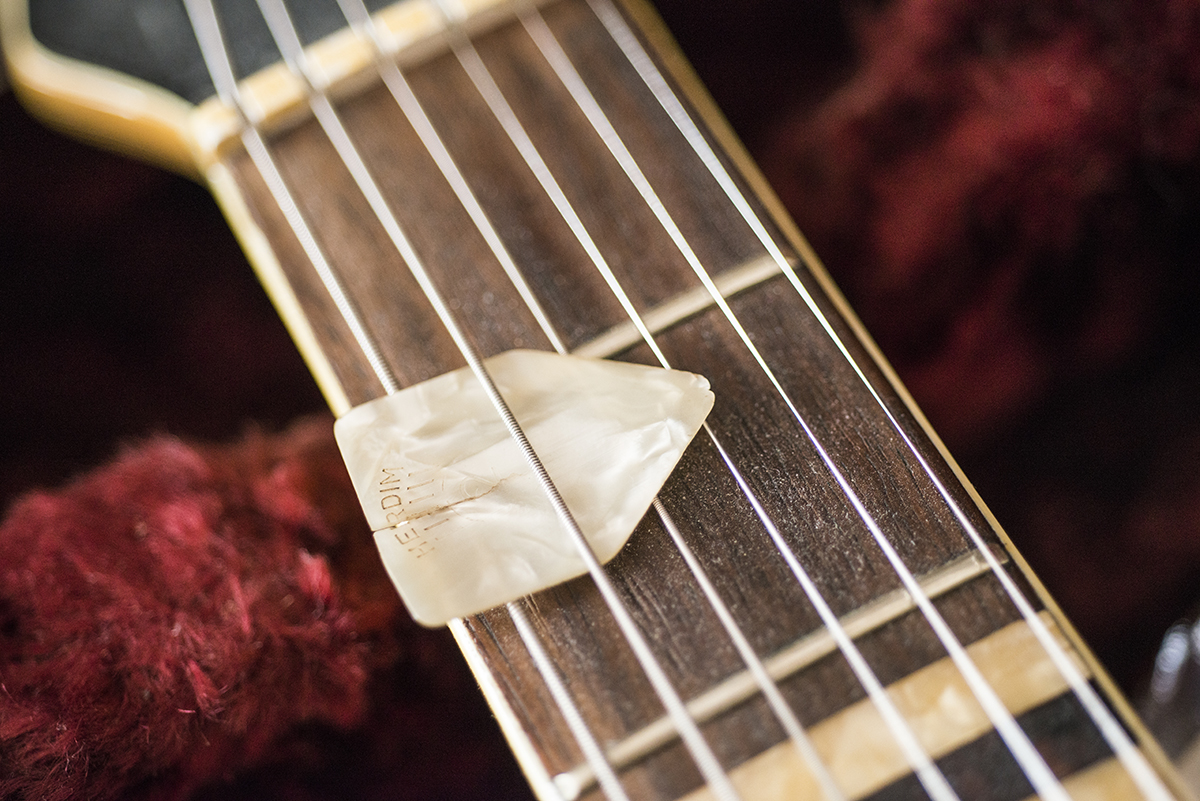 There was once a time when every guitar magazine interview would conclude with the question, “What picks do you use?” – to the point where it became the definition of the most bland thing a guitar player could be asked. But is it really such silly question to ask?

Most guitarists are pretty serious about tone, and yet the contribution of humble plectrums is seldom considered in the equation. Some great players have eschewed the pick altogether and the thumb or thumb and finger approach is integral to the tone and playing style of artists as diverse as Wes Montgomery, Mark Knopfler and Jeff Beck. However, few of us play with our fingers exclusively.

If you want to understand how much of an effect that picks have on a tone, spend some time working in a recording studio. If you do, you’ll notice how a guitar passed from one player to another can sound very different. Same guitar, same amp, same room… same everything – so how can this be? Well, in our experience, it’s often the plectrum.

For starters, picks can have a massive influence on the attack, solidity and tonal balance of your sound, and it’s more noticeable with acoustics than electrics. There are various factors in play here, including stiffness, shape, size and the material the pick is made from. Even so, guitarists tend to approach plectrums in the same way that they choose strings – they get used to something and then stick with it.

This article is intended to explore the subject of plectrums (or plectra if you want to get formal) in some detail. Perhaps after reading this, you might feel like experimenting – after all, it’s cheaper to buy a handful of different plectrums than it is to buy a set of strings.

When you spend a lot of time working with vintage gear, you’ll occasionally find equally vintage plectrums hiding away in old guitar cases, and you may notice that many are large and triangular rather than the medium sized teardrop shape we’re all used to these days. Some are straight-sided with sharp points, while others have rounded sides and corners.

These were widely used in the 1960s and Les Paul found them easier to grip with his arthritic fingers in his later years. Still widely available, you can order them online if your local shop doesn’t stock them. We find they produce a clear but bold tone and if you like to palm your pick, these are easy to tuck up and retrieve.

The shape can also make a difference to tone and sharply pointed picks tend to sound brighter than a more rounded pick of the same thickness. You can prove this by strumming a chord with the pointed end of a plectrum, and then spinning it around to play the same chord with one of the more rounded corners. The pointed end will sound brighter. Stevie Ray Vaughan was known to play with the rounded corners.

Many jazzers prefer very small plectrums, finding that they help with speed and accuracy. Sharp edges can also help plectrums slide smoothly off the strings, which can also facilitate speed. The range of shapes and sizes is enormous and the only way to find out what works for you is to try things out. But don’t make hasty judgements, because changing picks – especially if it involves a big change in shape and size – may require some adjustment time.

The earliest picks were probably quills, or pieces of wood or bone, but when the flatpick became popular, tortoiseshell (or more accurately turtle shell) became the material of choice. In order to protect the Hawksbill turtle, the use of its shell became illegal in 1973, and quite right, too!

It’s claimed by some that tortoiseshell is the ultimate for tone and some players have squirrelled away stashes of tortoiseshell picks for recording. However since the ban, a wide variety of alternative pick materials claiming to have similar properties have found varying degrees of popularity.

Initially, celluloid was found to be a decent substitute and buffalo horn is considered to sound tortoiseshell-like. There is also Red Bear’s keratin-based synthetic tortoiseshell and legally farmed tortoiseshell, but both tend to be on the expensive side.

Ivory is obviously banned but, believe it or not, you can buy picks made from Mammoth ivory. Tagua palm tree nuts, also known as vegetable ivory, can be worked into plectrums.
From there you can break things down into various types of plastic, including nylon and acrylic. Various metals can be used, such as copper, silver, aluminium and brass, as well as numerous varieties of hardwood. Also consider glass, carbon fibre, semi-precious stones, mother of pearl and coconut shell.

The flexibility and surface of these materials contribute to the tones they produce when used as guitar picks. Rougher surfaces will be easier to grip but they won’t slide off the strings easily and that can produce extraneous noises as well as slowing your picking down. Picks that are very hard and smooth can produce a glassy and clicky tone, but may become slippery in sweaty hands.

This is the crucial one because for most players it has the biggest impact on tone and feel. As a rule of thumb, thin plectrums produce the brightest tone and as picks get thicker, the tone shifts to the midrange and treble becomes less apparent. As discussed, shape also has a bearing but assuming material, shape and size remain constant, the rule holds true.

It’s interesting to consider why thin picks sound brighter and the bright tone of sharply pointed picks provides a clue. A sharp plectrum excites more upper harmonics than plucking a string with the fleshy part of a finger. Like a finger, a hard pick acts on a relatively wide area of a string, so the string is bent to a softer angle.

As a thin plectrum is pressed against a string, the string is deflected as usual but the plectrum bends along with the string. So the bend angle ends up being quite sharp and the tone is therefore brighter. However although sharp and thin plectrums both sound bright, thin plectrums can sound ‘slappy’ as they’re raked across the strings and this can be problematic when recording.

For fast and hard strumming patterns, a thin plectrum can free up your playing because its flexibility allows it to glide across the strings more smoothly. However, the flexibility can be an issue when you need to play fast and precise licks and solos. It’s almost as if there’s an unpredictability about the position of the pick’s tip – so precision suffers. This perhaps explains why so few jazzers and shredders play with thin picks – Pat Metheny and Paul Gilbert being notable exceptions.

Beyond a certain degree of thickness, a pick’s shape and composition start to have more bearing on tone. For instance bone and metal picks have no flexibility whatsoever but a squeaky ping may be detected at the front end of notes that helps cut and definition with high gain.

The downside can be a scratchy quality when you attempt rhythm parts other than straight ahead power chords and the extra effort needed to pass an ultra stiff plectrum across the strings can cause an increaser in wrist tension, which in turn can have a detrimental effect on playing feel.

Most players settle on a compromise thickness that works for rhythm and lead. However, an awareness of what works for different playing styles – and indeed different guitars – can improve your playing and tone if you’re prepared to pick the plectrum for the job at hand.

Beginners often struggle to hold on to a plectrum. It’s hardly surprising when most picks are so smooth and slippery. For most of us using a pick eventually becomes second nature, but even some experiended players still drop them. The tricky part is getting a firm enough grip on the plectrum without tensing up your hand and wrist.

This is a problem that’s obviously acknowledged by pick manufacturers and various methods are used to make plectrums easier to grip. Good old Herco Flex picks have always been easy to grip because the mouldings create a roughed up surface above the smooth string contact area.

Other grip-enhancing methods include holes in various patterns cut through the centre and diagonal striations – as seen on Wegen’s wonderful gypsy jazz picks.

If the pick is thick enough, manufacturers will even carve or mould a concave hollow for the thumb and a finger channel for the index finger. The best example of this is probably Dugain and their picks are arguably the most ergonomic of all plectrums.

If none of these methods work, you can also try grip aids such as Monster Grips adhesive silicone pads and the delightfully named Gorilla Snot Pick Honey.

In summary, there are various factors to consider in the search for the perfect plectrum. The best pick for your tone may not be the best for your playing style and as you get older, the ability to keep hold of the thing might become just as important as tone.

We’ll finish up with an observation from guitarist Henry Olsen, who helped a great deal with this feature and is a man who knows a great deal about plectrums: whether you pay five pence or £50 for a plectrum, losing your favourite is just as easy! Wise words.