All About… Preamp Valves

The thermionic valve was one of the most significant inventions of the 20th century and the vast majority of guitarists agree that valve amps are superior to their solid-state rivals. Huw Price charts the history of preamp valves… 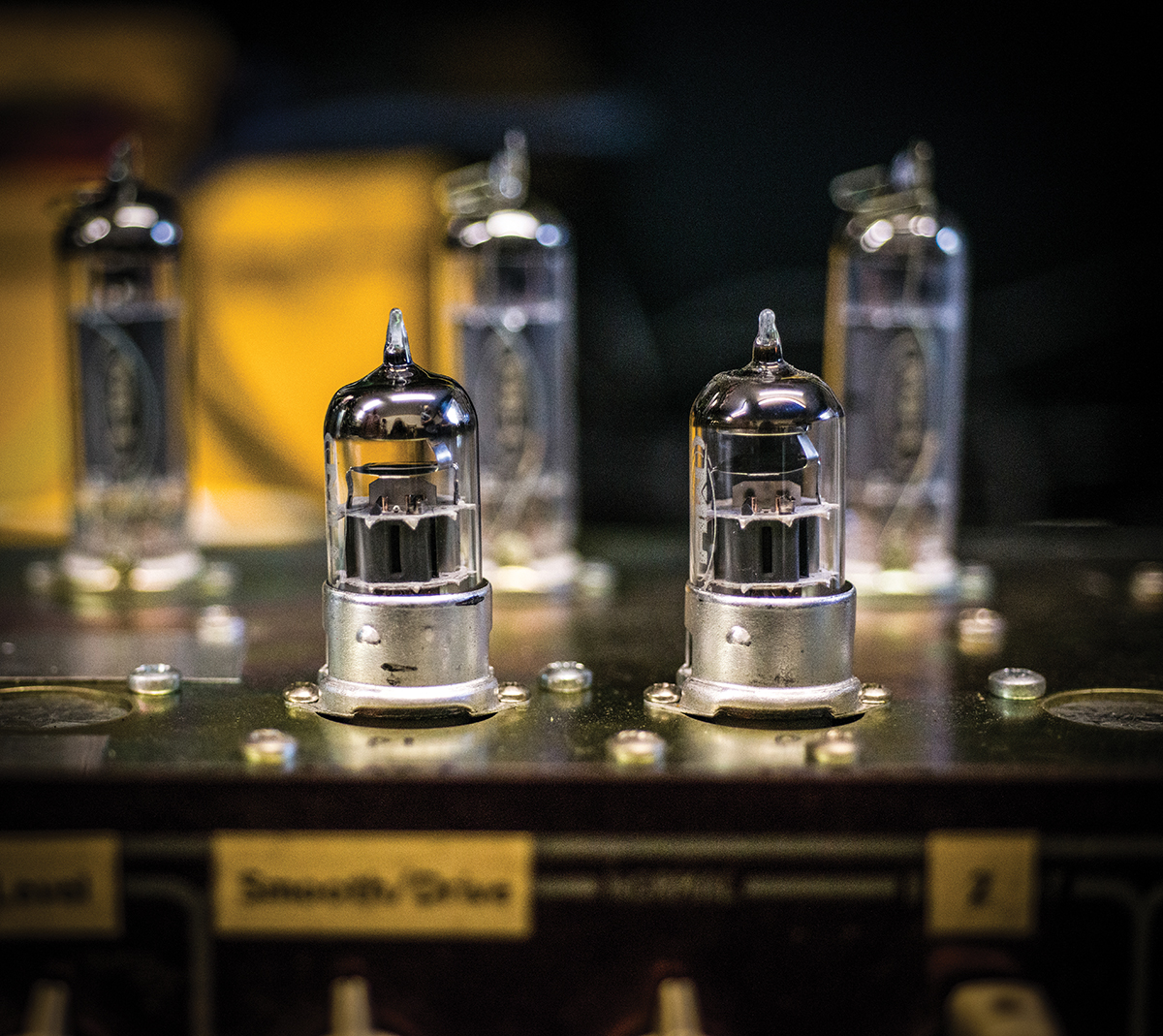 Although the silicon chip probably reigns supreme, few other recent technological innovations can be said to have changed our lives more profoundly than the thermionic valve. Without them, we would have been without home audio systems, computers, recorded music, long-distance telephones, radar, television, cinema and radio for most of the 20th century. Space exploration would have started a lot later and, most concerning of all, rock ’n’ roll would never have existed.

Technology marched on and by the mid 1960s transistors had taken over many of the functions performed previously by valves. Lower production and running costs, combined with improved reliability, made this shift both sensible and inevitable in many applications, but in high-end audio the valve lived on.

Although some claim that solid-state electronics can match valve performance, and even improve upon it, many hi-fi enthusiasts, recording engineers and musicians remain steadfast in their belief that valves simply sound better. Rightly or wrongly, the vast majority of electric guitarists prefer valves.

Although there are countless types of valves, or tubes as they’re known overseas, they mostly serve two functions in guitar amps. Rectifier valves are used in power supplies to help with the process of turning an alternating current into a direct current. Preamp valves and power amp valves both increase amplitude – in other words they turn low-level audio signals into higher-level audio signals. This month, we’ll be focusing on triode and pentode preamp valves.

Although you can get diode, triode, tetrode and pentode valves, only triode and pentode preamp valves are found in the signal path of guitar amplifiers. The triode is by far the most common variant, and almost every preamp valve contains two triodes.
Each triode will have three components – an anode (aka plate), a cathode and a control grid. The cathode is wired to ground, usually via a bias resistor and/or a bypass capacitor, so it’s negatively charged. The anode is connected to a high-voltage DC power supply via a plate resistor.

The valve also contains a heater (aka filament), and it receives a lower voltage supply that is typically 6.3 volts AC or, very occasionally, 12.6 volts DC. The heater gets hot, glows orange and heats up the cathode. When heated, the cathode begins to emit negatively charged electrons, which flow towards the positively charged anode. This is called ‘thermionic emission’, which is why valves are sometimes referred to as ‘thermionic valves’. The electrons are able to flow because there’s a vacuum inside the valve’s glass tube – hence the term ‘vacuum tube’. Charge flowing between the cathode and plate completes the circuit, so a direct current flows. 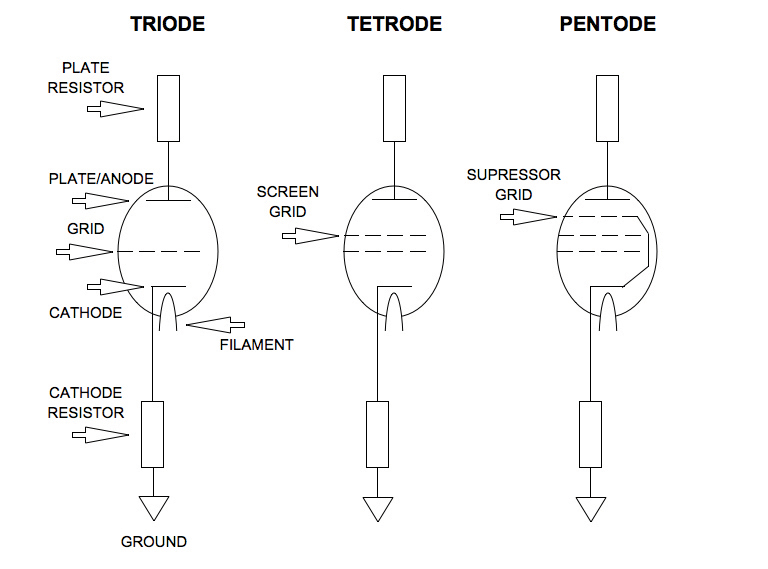 The grid can now attract and repel the electrons. When the guitar signal is in a positive phase, the grid becomes positive, which attracts electrons and ensures that more of them reach the anode. This increases the plate current.

Triodes exhibit a problem known as the Miller Effect, whereby capacitance between the plate and the control grid leads to oscillation when gain is pushed beyond a certain level. Adding a second grid, between the control grid and the anode, with a positive voltage that’s slightly lower than the anode’s, solves the oscillation problem because it acts as an electrostatic shield. It’s known as a ‘screen grid’.

This type of valve is called a tetrode, but it also has issues because electrons striking the plate at high velocity can cause more electrons to be emitted from the plate itself. This is known as secondary emission.

These electrons released from the plate are attracted to the positively charged screen grid, which results in a loss of plate current. So in this instance the ‘screen grid’ functions as an unwanted second anode and amplification is lowered. 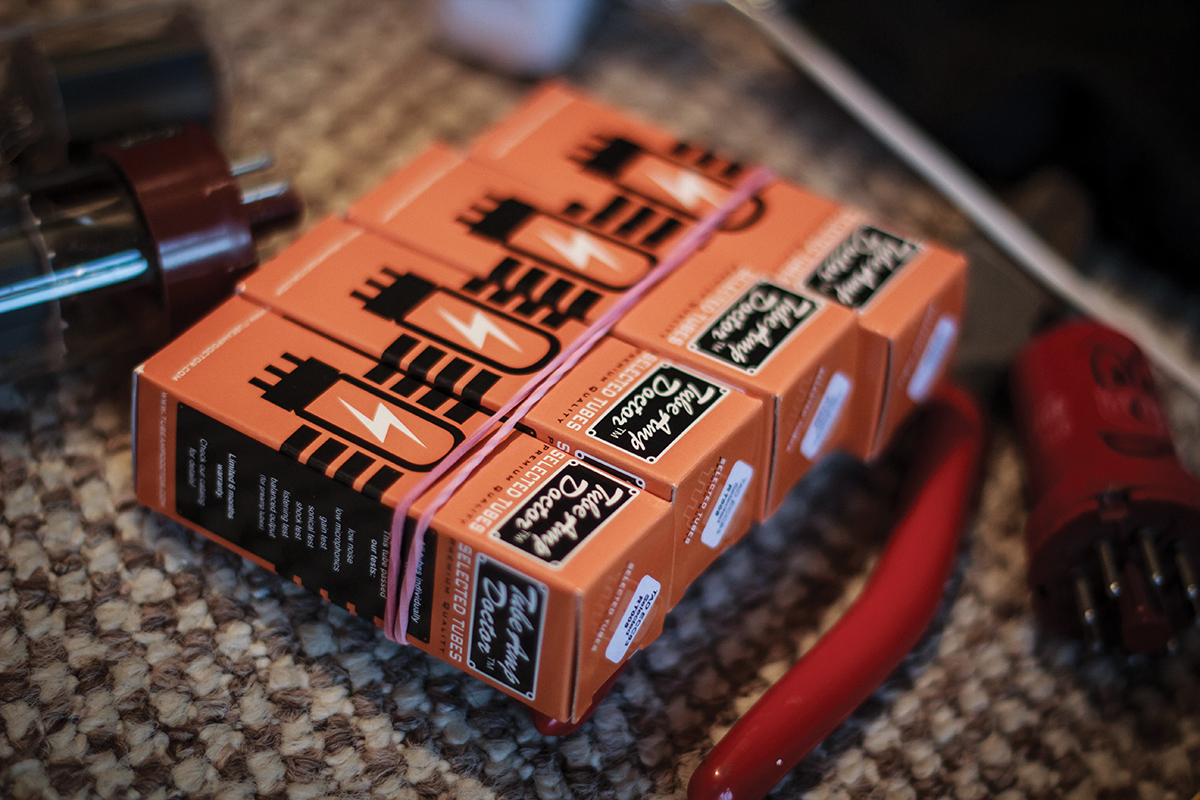 So, engineers added a third grid located between the screen grid and the anode, known as the ‘suppressor grid’. It’s connected to the cathode – internally or externally – and held at a negative voltage. It repels electrons released from the anode through secondary emission, so they can be recollected by the anode rather than the screen grid.

With an anode, cathode, control grid, screen grid and a suppressor grid, a pentode has five component parts – hence the name. Although they can be noisier, pentodes are more efficient than triodes and are capable of even higher gain.

Up until the mid 1950s, most guitar amps had octal preamp triodes. By far the most common are the 6SC7, 6SN7 and the 6SL7 found in pre-war Gibson amps, early Fender tweeds and Ampegs.

At first sight, they can be mistaken for a small power valve because they are much the same size as 6V6s and plug into large eight-pin sockets – hence the name. With a gain factor of around 70, the 6SL7 and 6SC7 are pretty good performers.

Known for their full midrange tones and sweet treble response, they sound superb for jazz guitar and they even have a following in hi-fi circles. However, put them in the right circuit and you get the dirtiest and fattest Billy Gibbons grind without the edginess or fierceness of some later amp designs. Some types are still in production, but new old stock examples are getting harder to find and they can all be prone to microphonic.

These days, they look like ‘normal’ valves, but they were called ‘miniature’ to differentiate the newer nine-pin valves from the earlier octals. Since they’re cathode biased, most of the common nine-pins are interchangeable, but they may not sound their best without circuit tweaks. The ECC88 is an exception to this rule because its pin connections are different.
The 12AX7 (aka ECC83 and 7025) is by far the most common preamp valve seen in guitar amps. Its gain factor should be around 100, and this is a great general-purpose preamp valve with a tone we all know and love.

When Fender first started using nine-pin valves, a 12AY7 (aka 12AY7) was invariably used for V1 and sometimes V2. With a gain of 44, the 12AY7 lasted in many tweeds right up until the brownface era. If your amp is too quick to distort or you’re looking for a more open tone with lower noise, try putting a 12AY7 in the front end of your amp. 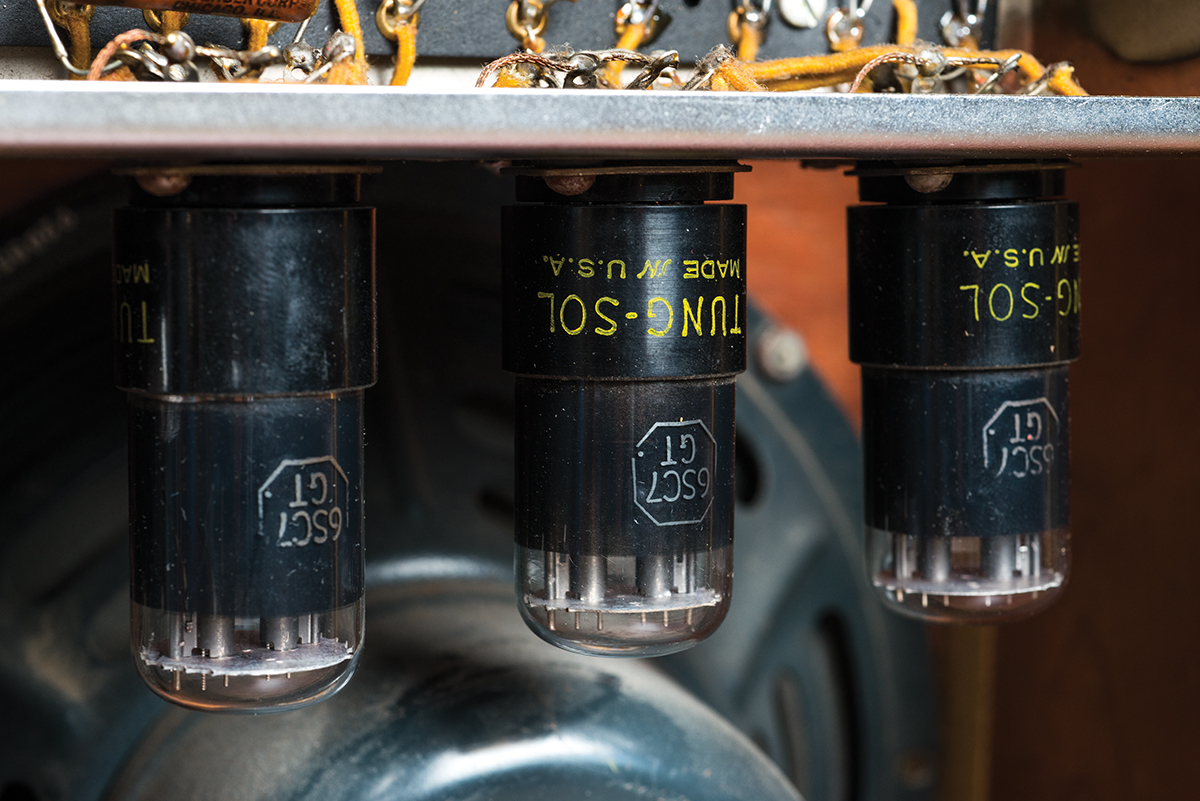 The 5751 (aka 12AT7) and ECC81 (aka 6201) provide a nice halfway point with gains of 70 and 60 respectively. The 5751 is a great-sounding valve that’s a straight swap for a 12AX7. The ECC81 has a cleaner, brighter tone, which limits its guitarist appeal somewhat. The ECC81 is more often used as a phase inverter or a reverb driver in guitar amps than as a preamp valve. With a gain of only 20, the 12AU7 (aka ECC82 & 6189) is seldom seen in guitar preamps. However, it makes a decent phase inverter and works well for effects loop buffering.

Most agree that the gain, clarity and brightness of pentodes are desirable characteristics for guitar amps, but relatively few designs have utilised pentodes in the preamp. You will see the EF86 in early Vox AC30s, AC15s and AC10s, as well as Vox-inspired contemporary amps from Matchless, Top Hat, Dr. Z and 65.

Gibson amps of the 1950s often had a pentode called the 5879 in the front end. Although under appreciated, especially on this side of the pond, amps such as the GA40 sound incredible – and the 5879’s fat, creamy and muscular tone is a big part of that magic. The recently released Victoria Electro King is a fantastic-looking and sounding repro of a late-50s GA40 with improved build quality.

The problem with pentodes is finding non-microphonic examples, and it seems only the boutique boys are prepared to test boxes of the things to select low-noise examples and back them up with a warranty. Most sound ringy from the get-go, and even if they start out quiet, they rarely stay that way for very long.

The same can be said of oddball valves such as the ECF82 used in the original Vox AC10. Containing a triode and a pentode in a single enclosure, they can be a real drag. Also be aware that you can’t replace a triode with a pentode because the pin connections differ.