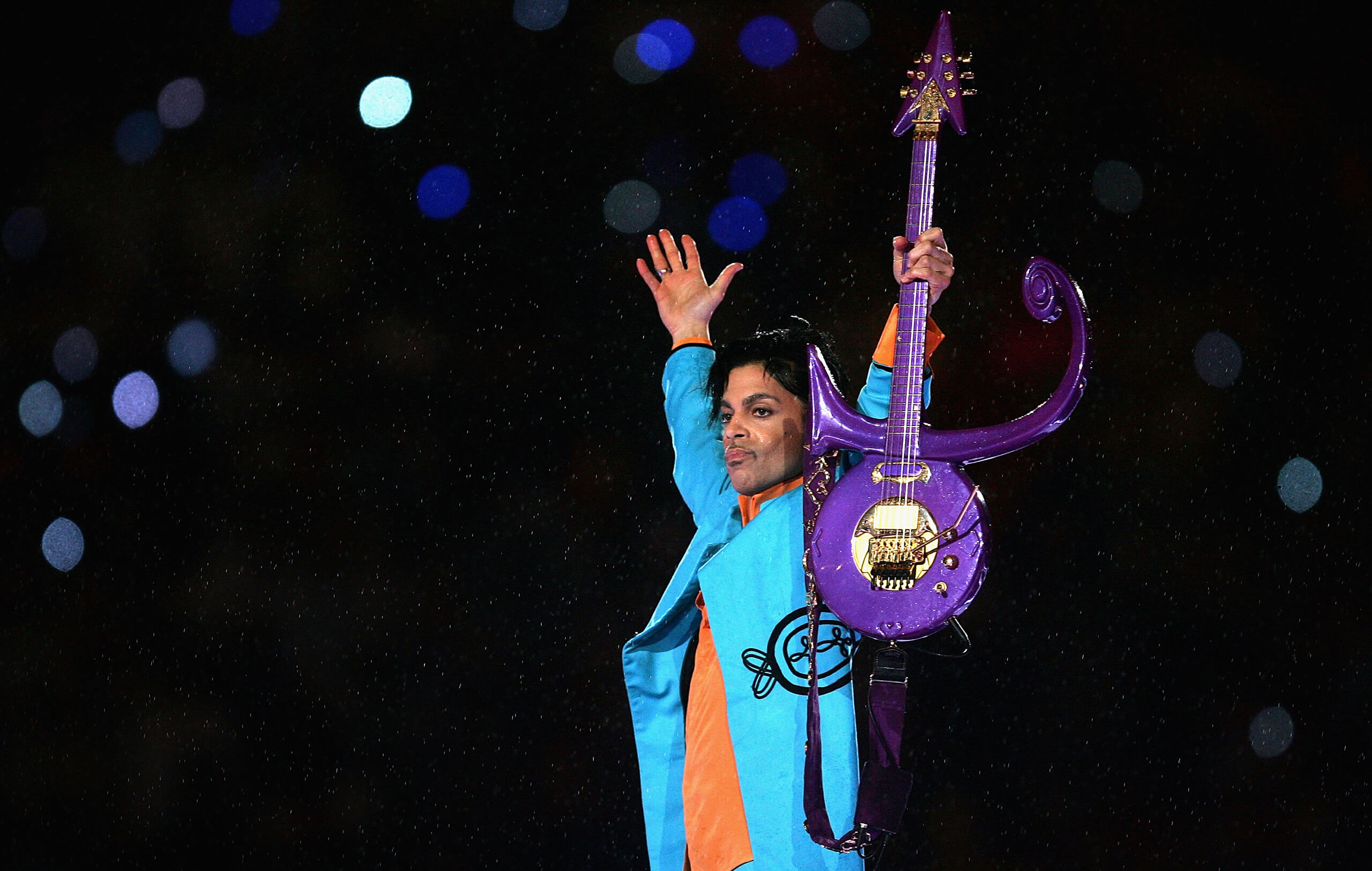 Prince handled a guitar like few others dared. A master of the devastating solo and electrifying riff, the Artist was also a considerable talent when it came to vigorous funk and elegant chord-craft.

Never one to shy from demonstrating his superhuman guitar credentials, Prince’s canon of studio albums features innumerable examples of his talent. Back when the 18-year-old Prince recorded his guitar parts – and every other instrument for that matter – for 1978 debut For You, the young songwriter was already gaining a reputation as a prodigious musical force in his native Minneapolis, a city with which he would become synonymous as he ascended to the status of global megastar.

Almost 40 years on and after a staggering 41 studio albums, the world bade farewell to the man who’d provided some of the most arresting, emotive and unforgettable guitar work of all time, be it the title track of his 1984 epic Purple Rain, the genre-flitting Alphabet Street from 1988’s Lovesexy or the plaintive, wiry blues licks of 2015’s Baltimore, from final record Hit n Run Phase Two. Prince exuded both technical proficiency and unpredictable inventiveness

Here we’re spotlighting some key tracks from across his mountainous catalogue, pointing out cuts that reveal Prince’s wizardry like no others. Though we’re sticking with studio tracks here, his show-stealing turn at the 2004 Rock & Roll Hall of Fame’s tribute to George Harrison – burning a flaming trail through the end of a star-studded performance of While My Guitar Gently Weeps – is essential viewing if you’re in any doubt about the purple one’s herculean dexterity.

Far from just being the means to knock out a killer solo, the guitar served numerous structural functions in Prince’s arrangements. Sign O’ the Times is bursting with genre-spanning ideas, and I Could Never Take the Place of Your Man is a sparkling example of Prince injecting flavour to complement a track’s ever-shifting dynamic landscape. Bound by its tight chordal construction, Prince’s high-gain solo morphs in melodic shape before the track breaks down into a restrained, downbeat arrangement. In this new context, Prince adopts a slicker vibe, with staccato riffs and fleeting clean-toned licks. Then, a gradual build-up returns us to the joyously upbeat chorus.

A 1999 cut that finds Prince at his most funky and, at times, his most carnal (getting caught listening to the section where Prince audibly sows his oats while a female voice moans in ecstasy is a tricky one to explain). While the constricted Bm7-Em7 frolic of the main sequence is a delicious example of Prince’s funk chops (that’s him on bass too), this eight-and-a-half-minute odyssey features some unexpectedly unhinged leads during its midsection. Preceded by stabs of distortion, rabid lead guitar disrupts the smooth groove of the arrangement and cavorts with a now unsettled rhythm section to round out a sexy, camp, musical drama.

Tim Burton’s first big-screen outing for the caped crusader reshaped the idea of Batman into a near-gothic terroriser of Gotham City’s underworld. It also birthed a solid Prince album. The Batman soundtrack found Prince engaging with the source material deeply, penning tracks from the perspectives of all the characters in the movie. The rock-funk hybrid Electric Chair was conceived as a Joker track. In suitably crazed fashion, it marries choppy funk with distorted deep breaths from afar, while the guitarist readies himself for a demented rock workout. As Electric Chair develops, spiralling leads burst out of every crack. It’s a track that seems musically at war with itself, and is all the more riveting for it.

This captivating Purple Rain cut is dominated by serpentine riffs and quick-fire runs of tense, zig-zagging lead breaks. While a longer – and even more astounding – version exists, complete with the legendary ‘Hallway Speech’, the album edit still dazzles. Once the hyperactive introductory sequence reaches a crescendo, a more stable bass part takes over as a gorgeous harmonised guitar lick enters the fray. A solo, based on a melody written by Prince’s father, drives further upwards, soaring around the higher octaves of the fretboard. The track’s theme – whether a computer has the capacity to love – is spelt out via its scant lyric, but it’s the impatience and erratic intensity of Computer Blue’s guitar work that sells the desperation of its titular AI.

Prince’s declaration that he would be known by a new persona (represented by the ‘Love Symbol’) in the early 1990s was an eyebrow-raiser for some. But the fear that this irrepressible musical genius had in any way gone off the boil was allayed by 1995’s spectacular The Gold Experience. Emphasising the album’s theme of transition, Dolphin centred on the idea of reincarnation. The visceral lyric is embellished by the crunchy distortion of the lead guitar part, which develops from reverb-soaked flurries into a rousing refrain via towering lead guitar.

A supernatural whirlwind of guitar announces the arrival of Purple Rain-era Prince. The album’s lead single was notable for a number of reasons. One: this was a brilliant piece of hook-laden songwriting. Two: the arrangement was seductively futuristic, and took several inspired risks with its instrumentation, such as the lack of bass, and sped-up keys. When Doves Cry also contains some of Prince’s most resplendent guitar work. Using his Hohner ‘Mad Cat’ Telecaster, Prince ducks and weaves a path through the song’s tight melodic alleys, leading to the glorious nirvana of its high-register howls. This was the sound of The Kid’s belligerence, battling to be heard and to break free of the confining world from which he’d come.

Calling his congregation to attention, Purple Rain’s energetic opener builds to its centrepiece solo with a vivacious pace. As Prince invites his listeners to ‘go crazy’ amid its synth-heavy foundation, his guitar lieutenant Wendy Melvoin rumbles in the wings. With her Rickenbacker 330, Melvoin motors through a hefty, sludgy riff in F♯, only hinting at what’s to come. As the track approaches minute three, Prince finally delivers on the promise, with a searing solo that struts all over the arrangement. As the track nears its end, this restless guitar part settles into a muscular riff in B, seizing the tempo and pummellig the arrangement into the ground. Let’s Go Crazy’s death throes are accented by the rich application of Prince’s Coloursound Wah, as this mischievous, thrilling opener comes to its end. Purple Rain has only just begun…

Among Prince’s most expressive solos, the multicoloured maelstrom that was first mooted for his abandoned album Crystal Ball was thankfully resurrected for his 1990 soundtrack album Graffiti Bridge. Snapping to life following its intro, Prince’s solo is violent and vivid. As multi-tracked vocals repeat the word ‘joy’, Prince’s spry lead dives into whammy-barred torment. The tone here – wrought from a combination of his trusty Boss SD-1 Super Overdrive and a Mesa/Boogie Mark II – is immaculate.

One of the earliest examples of Prince’s impressive ability as a guitarist, this fuzz-soaked outburst appeared on Prince’s eponymous second record. While debut For You – and large sections of its sequel – married soul, funk and R&B, on Bambi Prince’s rock ’n’ roll leviathan was unchained. The fuzzed sound of Bambi’s weighty riff and its deliciously unkempt solo landed an impactful punch amid the more staid arrangements elsewhere on the record. Though its lyric, dealing with the efforts of a seducer’s attempts to convince a lesbian that ‘it’s better with a man’ are at best naive and at worst problematic, the appeal of Bambi’s red-hot guitar work is enough to keep anyone enthralled.

Prince’s masterwork isn’t just his finest song, it also single-handedly justifies Prince’s entry into the pantheon of global guitar titans. Built around a wistful, chorus-soaked four-chord sequence delivered by Revolution accomplice Wendy Melvoin, Purple Rain builds from stately apocalyptic love song into hysterical plea for resolution and certainty, amid a backdrop of planetary destruction. It’s the all-or-nothing intensity of a relationship writ large. As the track dissolves into its awe-inspiring guitar solo, Prince loses himself in an inexorable delirium. Darting up and down the fretboard, he returns to the plaintive yet resolute three-note riff – holding firm as the world rips apart around it, then spiralling away into mini tornados of scale runs and wailing octaves. Purple Rain remains heart-stopping, even after hundreds of listens. It’s Prince’s musical genius in précis, and surely a contender for the greatest guitar solo ever committed to tape.