This scaled-down sibling to the White Falcon is one of the coolest Gretsch models of all time. Yet although the Penguin has recently enjoyed a resurgence in a variety of hues, on launch it proved almost as flightless as its avian namesake. 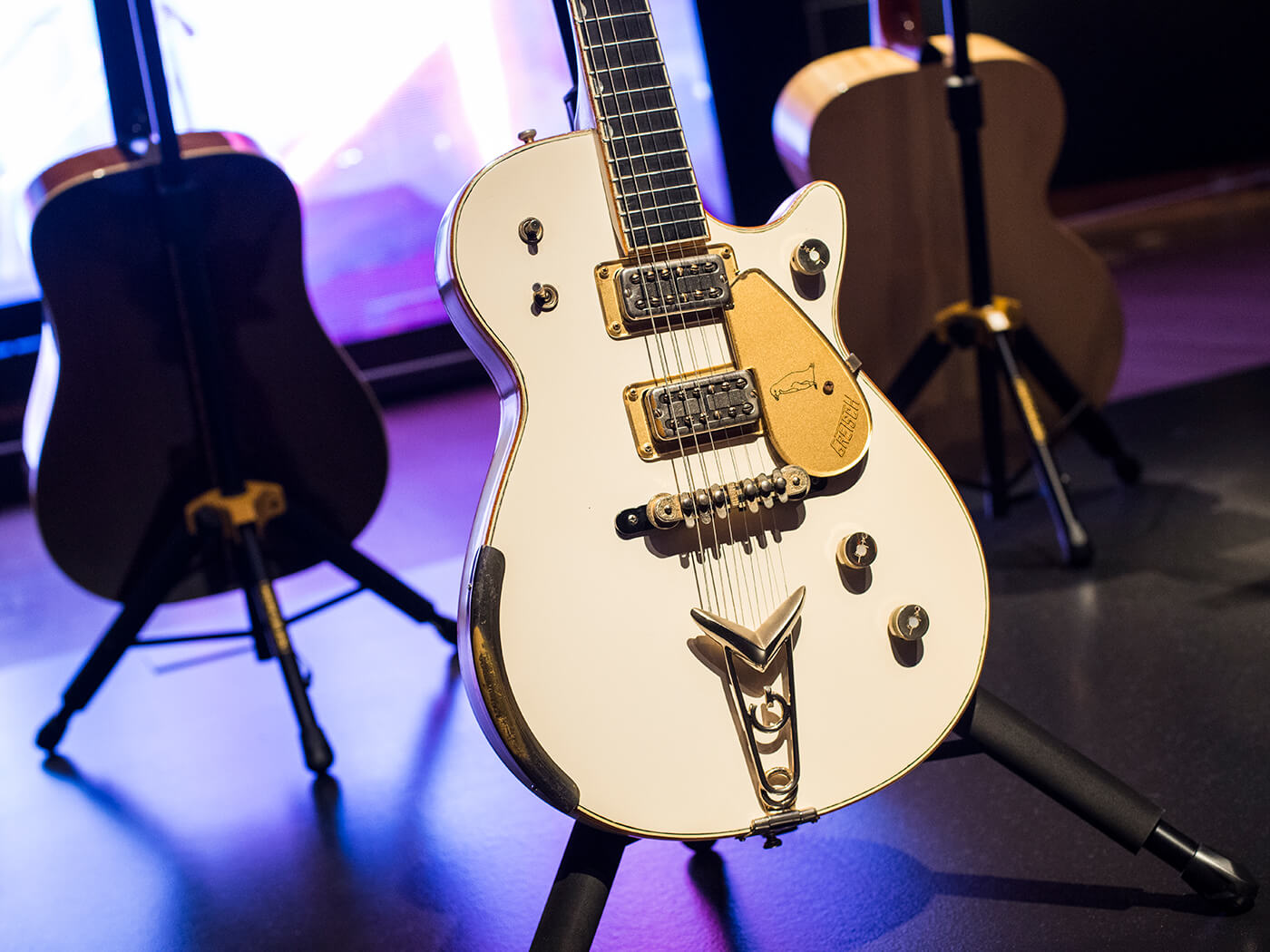 Imagine the meeting at the Gretsch HQ in Brooklyn. The firm’s bigwigs, notably Fred Gretsch, Jimmie Webster and Duke Kramer, were talking about new models for 1956. The previous year had been a big one for Gretsch, with the Chet Atkins 6120 and the White Falcon both launched to considerable acclaim – and along with the hollowbody 6120, the company had introduced a chambered version, the 6121. With that in mind, Jimmie Webster told the meeting he thought it would be a good idea to produce a matching ‘solidbody’ version of the high-end White Falcon. And what’s more, he had a name for it: the White Penguin. Once the laughter died down, the team began to consider the practicalities.

Gretsch had produced its first solidbody-style guitar a few years earlier, the Duo Jet. And while it came on like a solid, with the general look of Gibson’s new Les Pauls, it was made differently. For its Duo Jet, Gretsch routed out a mahogany back to provide a sort of sectioned box, which accommodated the electrical bits and hook-up wires. To this they added a pressed laminated maple top, which joined the back only where the box was not routed, primarily at the sides and around and under the bridge. The pickups were then mounted to the top.

Gretsch’s new-for-1953 ‘solid’ guitar was therefore technically semi-solid. As a result, it was relatively light, which to some extent helped give the guitar its sound. But its look, catalogue description, and intended place in the market meant that the Duo Jet was in effect Gretsch’s first solidbody electric guitar. Duke Kramer told me: “A lot of people called it a semi-solid, because we routed out an awful lot of space in the wood for the electronics. But basically we considered it a solidbody guitar.”

The sparkle-finish Silver Jet and the country-flavoured Round Up followed in ’54, and then the Chet Atkins Solid Body and the red-finish Jet Fire Bird in ’55, all with the same general construction style and base feature sets. And now a further model was in the works: the White Penguin.

The Penguin’s partner, the lavish White Falcon, had already set a high benchmark for Gretsch’s hollowbody electrics. The Falcon was a stunner, and the Gretsch 6134 White Penguin, launched in 1956, followed virtually all the contemporary Falcon’s flamboyant trappings.

The Penguin’s single-cut body was 13.5 inches wide and finished in a striking white finish, complete with gold-trim binding. The neck was topped by a large winged headstock, which had gold sparkle decorations borrowed from Gretsch’s established drum department. All the metalwork was gold-plated, including the fancy Grover Imperial tuners, Melita bridge, and a stylish new tailpiece, soon nicknamed the Cadillac because its bold V shape was similar to the car logo. The control layout consisted of four jewel-inset knobs (three volume, one tone) plus a pickup selector. The markers were etched hump-tops, the pickups were single-coil Dynasonics, the gold plastic pickguard featured a little penguin at rest, and the body usually had a banjo-style armrest. 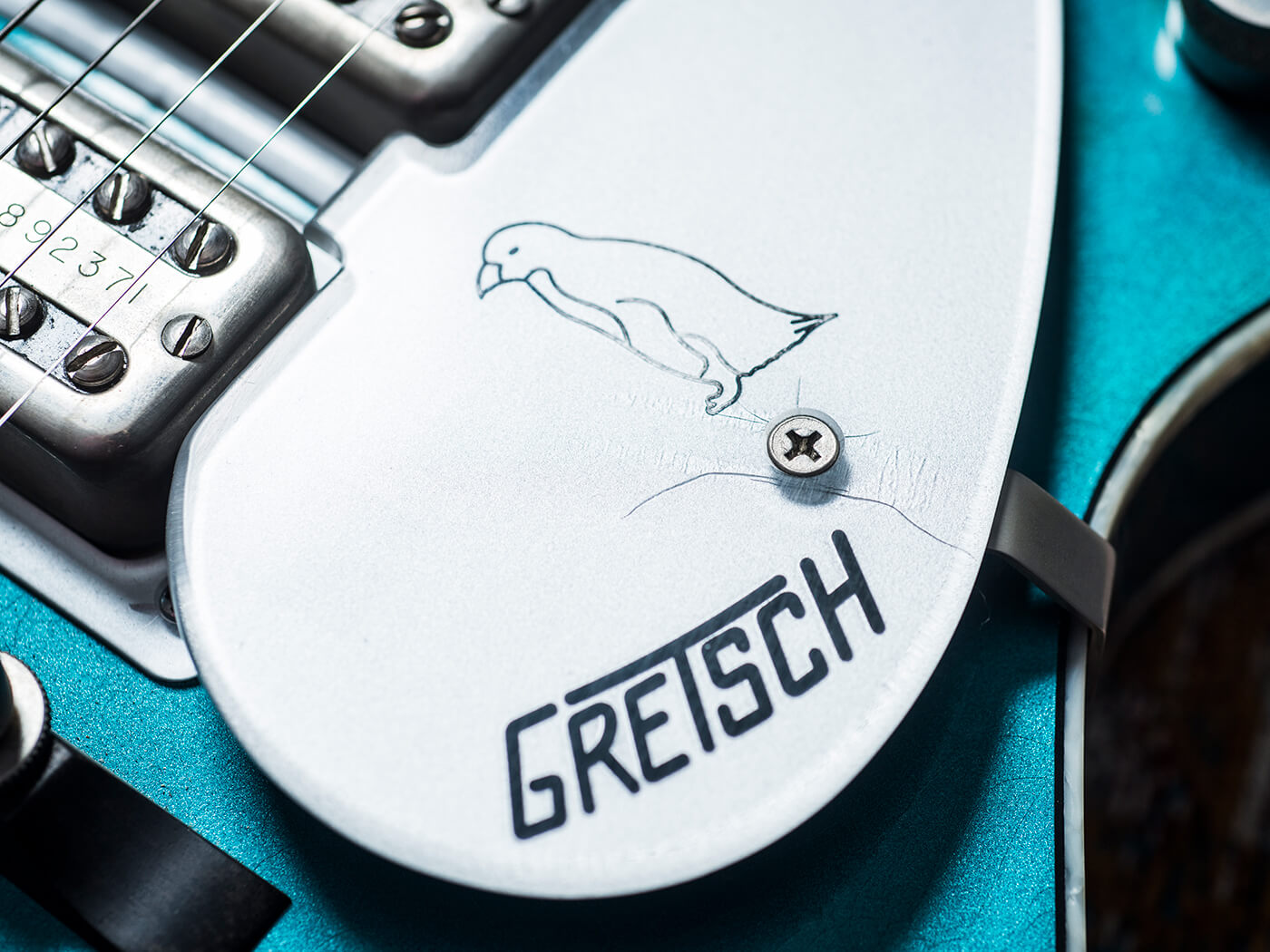 Almost as soon as it was introduced, the Penguin seemed like a wayward creature wandering a little aimlessly among Gretsch’s more successful models. It was absent from any catalogues I’ve seen, it appeared on only a handful of pricelists and was briefly name-checked in a single brochure. A June ’56 list pitched the Penguin at the top of Gretsch’s solidbody models at $475, beating the $400 Chet 6121 into second place, ahead of the $350 Round Up, $310 Silver Jet, $300 Jet Fire Bird, and $290 Duo Jet. The White Falcon, meanwhile, listed at a cool $650. That same year, a Les Paul Goldtop listed at $235, a sunburst Strat $274.50.

The few Penguins that Gretsch made mirrored the changes going on elsewhere at Gretsch. Around ’58, that meant a shift to humbucking Filter’Trons, thumbnail markers, horizontal headstock logo, Space Control bridge, and a control layout of three volume knobs and a selector each for tone and pickups. Then in 1961, there was a change to the new double-cut style that Gretsch was applying across most of its models, hollow or solid. Ed Ball has done the best research into 50s Gretsches, published in his Ball’s Manual book, and his educated guess is that fewer than 50 single-cut Penguins were made. There must have been even fewer double-cuts.

And your bird can swim

Since Gretsch’s revival in the late 1980s, the company has made various reissues of the Penguin. Stephen Stern at the company’s Custom Shop told me the Penguin is the Shop’s most popular model. “I think that’s because there were so few originals made,” he says, “but also, like all Gretsch guitars, there are so many ways now to ‘dress up’ a Penguin, with different bindings, colours, woods, and so on. It all works – and you can’t say that with all guitars.”

The scarcity of the original Penguins turned them into rare birds indeed. One of the few this writer has seen was owned by the late Scott Chinery, with whom I worked on a book about his collection. “An enigmatic guitar, to say the least,” Scott said as we pored over his ’56-style Penguin. “The original owner fooled around with it for a few months, and then put it under their bed. Forty years later when he took it out, it had appreciated to $80,000! It’s the rarity and the mystique that make it worth so much. I don’t know that it’s a really great guitar as far as playing goes, but it certainly has an aura about it – a real exciting guitar to me.”

Another famous Penguin I came across was the one owned by David Gilmour, which I encountered as we photographed it for my Ultimate Guitar Book. This had ’58-style appointments, including Filter’Trons – and an unfortunately damaged pickguard. That didn’t stop someone paying $447,000 for it at David’s big Christie’s auction last year. Quite a chunk of change for a $475 guitar that almost nobody at the time wanted.