All About… Tadeo Gomez

Fender’s greatest-ever neck carver was an orphaned migrant worker who walked a thousand miles to get to America. 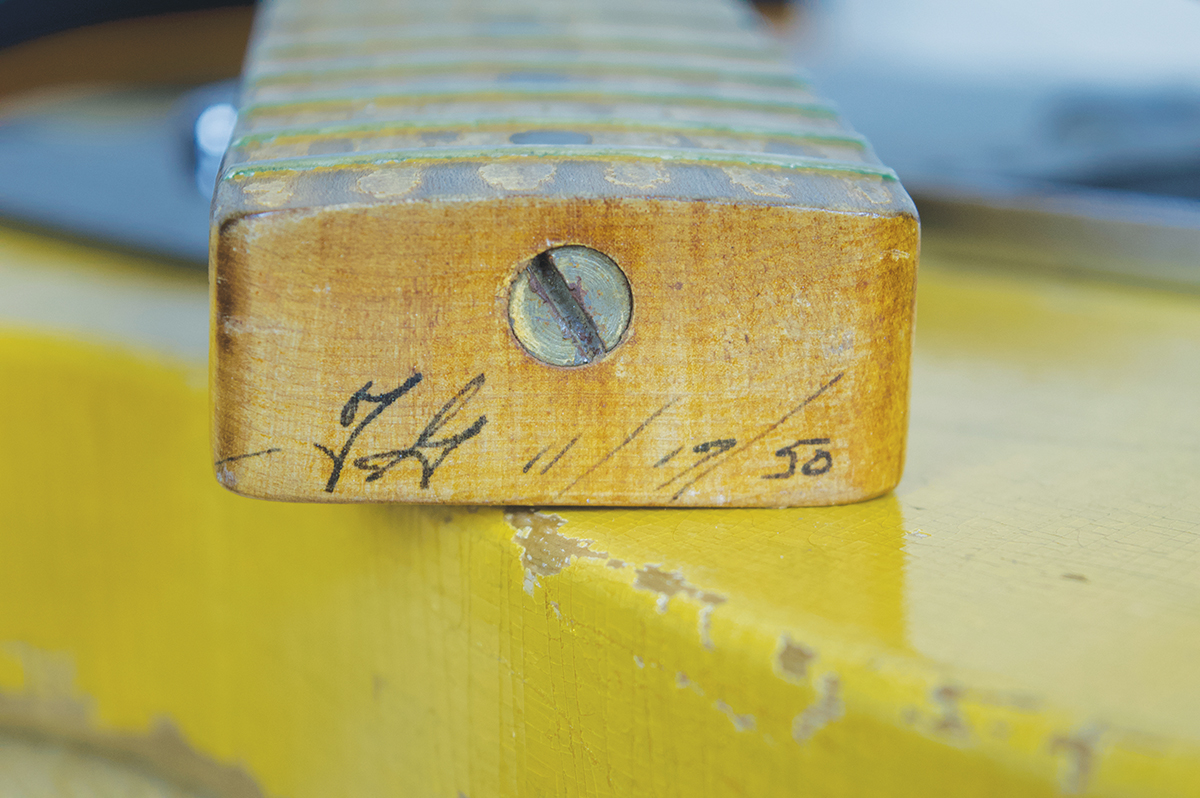 Pick up any book on Fender history and check out the 1950s factory pictures for proof that Fender’s employees were a mixed group. Look at some of the signatures inside the tweed amps and you’ll encounter the names of Lydia Sanchez, Lupe Lopez and Maybelle Ortega. The staff also included Geraldine Herrera working on lap steels and Art Cordero on pickguard duty, among many others. Indeed, many of the most iconic Fender guitars and amps ever were crafted by members of the Latino community back in the 50s and 60s.

And then there was the worker commonly identified by his initials ‘TG’. Besides those who worked most closely with Leo Fender, the company’s most famous employee from that era is almost certainly Tadeo Gomez.

Today, many regard him as the greatest neck carver of the 1950s, and his style of shaping necks has influenced countless guitar makers. These days, any 1950s Fender guitar with a neck that can be attributed to Gomez will be worth a premium.

Tadeo Gomez was born in 1902, in a town called La Cueva in the Mexican state of Jalisco. Both his parents died within two weeks of each other when he was just 12 years old, and Tadeo was left to take care of his younger siblings. His older brothers had already left Mexico and were working in a silver mine in Jerome, Arizona, so Tadeo decided to join them when he was 13 or 14.

Walking was the only way he could get there, so he followed the railway tracks for over 1,000 miles, surviving on banana peels and other leftover food that passengers had thrown from train windows. Tadeo eventually made it and began working in the mines, where one of his brothers would later be killed.

He married a woman named Petra in 1925 and they followed the crops to Northern California. By 1943, Tadeo, Petra and their six children were living in the small city of La Habra, in Orange County, California. In his book, The Blackguard, Nacho Baños notes that Tadeo was almost certainly working for Leo Fender during 1950, because his signature has been found on some very early Broadcaster necks. La Habra is just five miles away from Fullerton, where Leo’s factory was famously located, and Tadeo’s son Benjamin recalled that “there used to be quite a few from La Habra that worked at Fender”.

Tadeo would occasionally take his son to the Fender factory, and Benjamin remembers his father often worked under a canopy. He told the La Habra Journal: “Dad would be outside sanding and shaping the necks. Sometimes, he carved a little to get it just right. He had taught himself woodworking. Nothing was too hard for him to learn.” 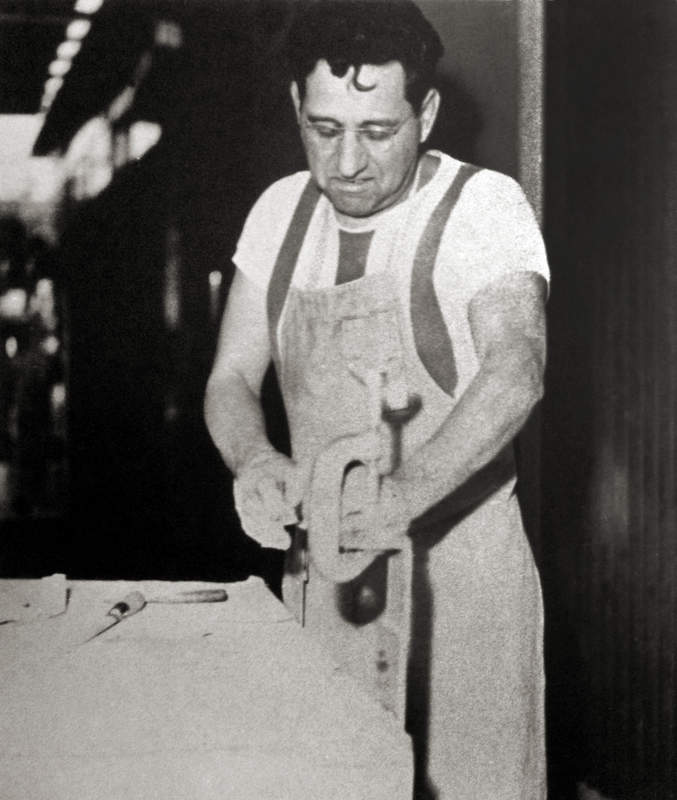 Two features appear to characterise the necks shaped by Tadeo Gomez. Some credit him with developing Fender’s ‘soft V’ profile, and he’s also known for shaping the soft transition from the back of the headstock to the area behind the nut. Nacho Baños declares that Tadeo’s style has become “a master reference by which today’s reproduction necks are judged” and some people even call this the ‘Tadeo taper’.

Once he was satisfied with a neck, Tadeo would initial and date the end of the truss rod in pencil; then these marks would be sealed under the lacquer finish. However, there is some debate and controversy about whether every one of the necks with Tadeo’s signature was actually carved by Tadeo himself.

Much of this arises from inconsistencies in the handwriting, because some Initials appear squared off while others are quite rounded. There are also necks signed ‘TAD’ and even ‘TADEO’, and it has been speculated that Tadeo eventually took on more of a foreman’s role, supervising neck carving and authorising other workers to sign the necks off once he had approved them. During the course of researching this article, we also found pictures of ’51 and ’52 Telecasters with ‘TADEO’ and ‘TG’ signatures in the neck pockets. It’s been noted that things were pretty chaotic at the Fender factory prior to eventual VP Forrest White’s arrival, and that employees would work all over the shop. So maybe Tadeo routed a few bodies while he was at Fender, too.

Tadeo left Fender in 1957 due to disagreements with a new supervisor who felt that his work wasn’t up to the required standard. Instead, he took a job as a carpenter working on the construction of Disneyland and this job lasted until the mid 1960s, when he returned to Fender. By that time, Leo Fender had sold his company to the giant CBS Corporation. The subsequent CBS years were very much the dark days of Fender, when the company’s reputation was almost ruined by questionable management. The greatest neck shaper in Fender’s history was re-employed as a maintenance man.

Some cite this as an example of CBS’s ineptitude, because Tadeo’s expertise could surely have been better utilised. No doubt this is partly true, but Fender’s manufacturing process had evolved since the late 1950s.

Neck fashions had changed, too, and by the mid-1960s, none of the major manufacturers were making the sort of chunky V-shaped necks Tadeo was known for. It might also be instructive to look at Tadeo’s birthdate and do the maths. He began his second stint when he was in his mid-60s, and carving necks by hand is quite arduous. Perhaps Tadeo was happy to be doing less physically demanding maintenance work and besides which, the Fender factory was still making pretty great necks during that time. Tadeo’s second term at Fender ended in 1969, after an accident at work. He was carrying out some electronic maintenance work when he received a shock that threw him off a ladder.

When they first moved to La Habra, Tadeo built a shop for his wife Petra that they called La Chiquita Market. Tadeo had always helped out at the shop after work and, according to his grandson Jim, they did great business selling 20-cent snow cones known as ‘raspados’ – often making up to $600 per day. People would come from miles around to buy them. Tadeo continued running La Chiquita with Petra until 1985, but was forced to close it due to ill health. The following year, he died from a cardio-respiratory arrest brought on by bronchitis and an infection. Petra passed away in 1989.

Until recently, Tadeo’s family knew little about his exploits at Fender. One night, his grandson, Jim Gomez, was surfing the net and was shocked to discover Tadeo is actually quite famous. Jim, who has served three terms as mayor of La Habra, has since tried to learn as much as he can about his legacy. The family did have the 1928 Model T Ford that Tadeo brought from Jerome to La Habra, but sadly, Tadeo never brought a guitar home from work to leave as a family heirloom. According to Jim, his grandfather would occasionally bring home factory-reject necks for the children to play with, but they are all long gone.

Jim Gomez also told us that La Habra was still segregated when Tadeo built La Chiquita in an area designated for migrant workers. Jim recalls his grandfather’s kindness and compassion towards those people who suffered great hardship. He would give anybody credit in his store, and if they couldn’t pay it off, he never chased them for the money. Family was the most important thing in Tadeo’s life and Jim Gomez recalls a wonderful grandfather. He still thinks about him every day, but it’s good to know that there are people all over the world who still think about Tadeo Gomez from time to time – and many of the guitars he helped build are still out there making music.