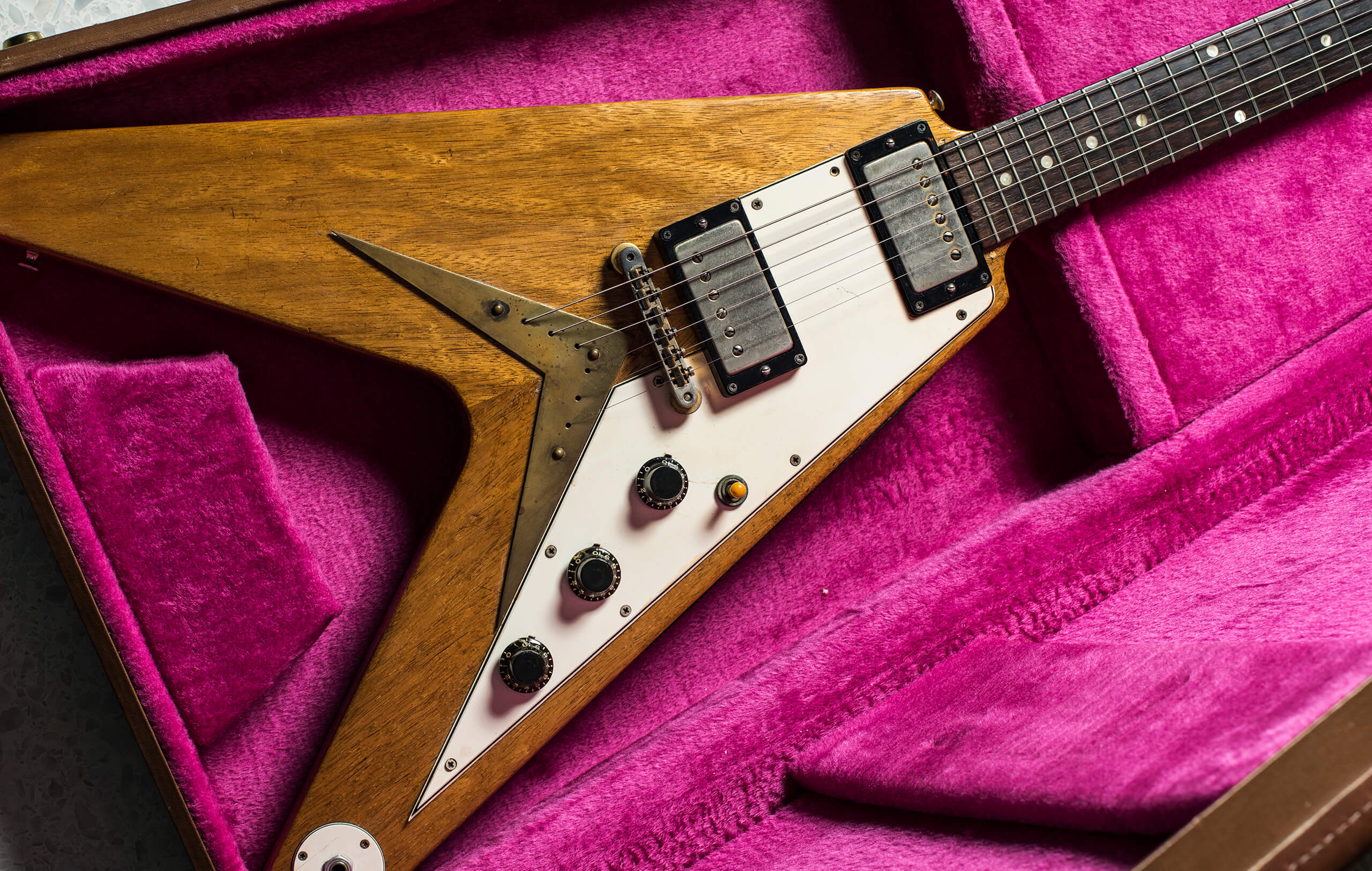 The history of the Gibson Flying V

Though it was used to electrifying effect in the second half of the 1960s by Jimi Hendrix and Dave Davies and later became iconic, the Flying V’s take off was somewhat delayed.

Dave Davies knows a good thing when he sees it. And as he rummaged in an American music store in 1965, desperate to find a replacement for his Guild Starfire lost by an airline on The Kinks’ tour route to the West Coast, he struck gold. Well, in fact, he struck korina.

Dave spotted an interesting brown case on a high shelf in the shop and asked to have a look. After some shifting and heaving, the dusty old case revealed its secret. Dave left the shop with a striking prize – one of the original Gibson Flying Vs that had lain neglected and unsold for several years in stores like this one.

The Flying V had first appeared seven years earlier, in 1958, at a time when Gibson was considered a safe, successful Midwest manufacturer. Managers at the firm were rattled by Fender’s growing success, however, and in 1952 they’d reacted to the Californian threat with the Les Paul Model, something of a solidbody version of Gibson’s traditional archtop style. Meanwhile, Fender launched its new Stratocaster, a gleaming wonder that seemed excitingly new. And it had a modern, space-agey kind of name, too.

To the drawing board

Gibson had little choice but to compete further. It was Seth Lover at Gibson, best known for the humbucking pickup, who drafted three new designs that might shift Gibson from an old-school approach to something more of-the-moment.

“That’s a body style I designed for them when I was at Gibson,” Seth told me later, pointing to a picture of a Flying V. “The idea behind that was to get some new shapes, and I designed this. I sketched out a number of shapes and styles that I thought would be different for guitars, rather than going back to older designs.” Today, we know these as the Flying V, the Explorer, and the (unreleased) Moderne. Gibson called them collectively its Modernistic guitars.

Seth also provided the snappy model name for the first of the trio to go into production. Gibson boss Ted McCarty told me: “When Seth saw the first one, he laughed and said, well, that looks like a flying vee. So we named it the Flying V.”

The company previewed the new model at the end of 1957 in its Gibson Gazette promo magazine, and the following March, the V appeared in a catalogue at $247.50 (about £1,700 in today’s money). This was the same price as the Les Paul Model, and the two sat around the middle of Gibson’s list of electrics. A Fender Stratocaster was pitched at $274.50 at the time, a Telecaster $199.50.

“Gibson leads the way with this design of the future,” the catalogue insisted. “The swept-back, modernistic lines of this really forward-looking instrument will be a real asset to the combo musician with a flair for showmanship.” The design used dramatic straight lines in place of traditional curves, and the V’s headstock was the body shape in miniature, a variant of Gibson’s traditional three-tuners-a-side design.

The catalogue said the V was made from the “finest korina hardwood in natural limed finish.” Korina was an American trade name for a West African hardwood, Terminalia superba, usually known as limba or afara. Korina is sometimes compared to mahogany, thanks to its average weight and its tonal characteristics for solidbody guitars, but it’s a different species and family.

Gibson probably chose korina for its look and colour, which gave it almost a Fender blonde-like appearance – and it didn’t need the extra work that mahogany would require to provide a similar effect. Gibson was already using pale korina for the Skylark lap steel, introduced in ’57, so there was likely some stock at the factory, and it had also used the wood for the Consolette steel, a model dropped during ’57.

Just 81 Flying Vs were shipped during 1958, a year when Gibson’s bestselling (and, inevitably, budget-price) electrics were the hollowbody ES-125 (1,528 shipped in ’58) and the solidbody Les Paul Junior (2,408 shipped). In 1959, Gibson shipped just 17 Flying Vs, marking an almost total collapse of interest in the new guitars.

Gibson attempted to apply some positive spin to this failure by publicising the fact that some enterprising store owners found the Flying V useful in window displays designed to attract potential customers. One such was the Scalise Music Center of Richmond, California, which mounted an imaginative space-travel theme for its window just a few months after America’s fourth Earth satellite soared into orbit.

Scalise’s display featured fanciful depictions of a rocket ship and a satellite alongside a real Flying V. Gibson said in its Gazette magazine that the store’s manager had never seen such crowds around his window and that the V was sold within two days.

Most stores, however, had little success with the ‘difficult’ new model. Production may have stopped in ’59, but well into the new decade some Vs – like the one Dave Davies happened upon – hung around for quite a while in the murkier depths of some music shops.

Dave’s new-old guitar soon got noticed, and Beat Instrumental caught the vibe. “So many people have been enquiring about the weird guitar that Dave Davies has been using,” the magazine reported, “that [UK distributor] Selmer has contacted Gibson to find out about it. It’s called the Flying Arrow and was made for a speciality act in America.

“Gibson felt that it was too way-out to be a success, and it was only by luck that Dave happened to get his secondhand in the States. As yet, there is no possibility of it being put on the market.”

That muddled info was given at the start of 1966. Soon, however, plans were under way at Gibson to launch a revised version of the Flying V, which became fully available by early ’67. Since then, of course, many guitarists have discovered the agreeable qualities of this creation, now recognised as a wonderful classic. But it nearly didn’t make it beyond a brief two-year existence that, from Gibson’s point of view, seemed like a failure.