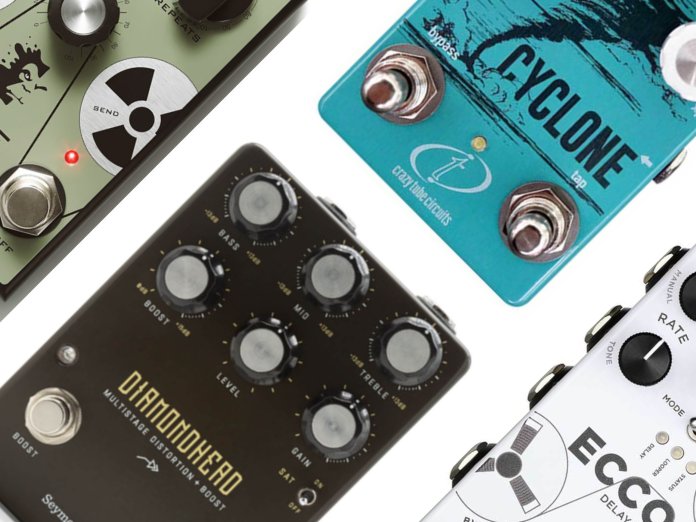 The Scorched Earth (pictured above) by Haunted Labs features vintage silicon clipping hardware and a tried-and-tested trio of tone, volume and fuzz controls for some old-school fuzz attitude. The tone knob can sweep the sound from creamy smoothness to a more biting, aggressive tone, all the while emphasising harmonic character and saturation on higher fuzz settings.

An all-analogue phaser pedal with four classic phaser voices on offer, Crazy Tube Circuits‘ Cyclone does come with some extra modern controls not seen on the classic phasers it emulates. A mix control lets you blend in more dry signal, while the depth, feedback and speed knobs operate the phaser modulation.

According to Mr Black, the OD-503 aims to “enhance the drive and natural harmonic content of your instrument”. The nature of a low-gain overdrive like this means minimal compression, and the OD-503 sports three knobs – output, treble and drive – for simple and fuss-free operation. A great choice for guitarists who want an extra bit of saturation and bite without sacrificing dynamics.

Keeley’s Eccos combines a vintage-styled delay with a fully-featured loop station for endless ambient experimentation. The looper aspect of the pedal offers unlimited overdubs and can store either 120 seconds of mono loops, or 60 of stereo. When in delay mode, the two footswitches offer either true-bypass switching or tap-tempo for fine control over the tape delay. The Eccos also supports expression pedal input for control of the blend of the effect.

While the Magnetic Effects Electrochop’s core controls allow for fine control over the tremolo’s shape, connecting an external tap tempo pedal will allow you to unlock its full potential. Two selector switches choose between five different waveform options and a variety of different quarter-note divisions for even more variance in speed. Furthermore, the LED pulses in time with the effect, whether it’s on or off.

Seymour Duncan‘s Diamondhead takes inspiration from the classic heavy metal tones the come from pushing a cranked half-stack. The optional SAT mode adds 24dB of boost before the gain stage when engaged, creating a punchier and more mid-focused tone. The main distortion stage is managed by five control knobs while the final boost stage has a dedicated knob which controls up to 15dB of clean boost.

Wampler’s Terraform is something of a do-it-all of modulation effects. The true-stereo pedal’s rotary selector knob lets the user choose from either auto-wah, envelope filter, flanger, phaser, U-vibe, rotary speaker, auto-swell, tremolo, harmonic tremolo, chorus or dimension effects. A preset button allows for quick saving and recalling of settings, and the I/O of the pedal allows for MIDI input to change the pedal’s settings.

Experimenting with the harmonics, manual and treble controls of ThorpyFX‘s Camoflange allows the user to manipulate the character of the Camoflange’s effect. For example, turning the harmonics control fully counter-clockwise elicits repetitive odd-order harmonics, while the manual control can be used to manipulate the amount of ‘space’ within the modulation. Turning the treble knob clockwise adds a little top-end for a shimmery effect. The Camoflange also includes wet and dry outputs for stereo pedal users.

The use of the EP3 in studio records is all but legendary, and J. Rockett throws its hat into the ring with the Ape. The pedal recreates “the entire analogue circuit from input to output including the sonic influence of the tape heads”. Like the original EP3, it even sports the same internal voltage of 22.5V.