Beginner Music Theory: Finding your way across the fretboard

Learning how to identify the notes on a guitar is like having a map of a city you’re visiting—you shouldn’t do without one. 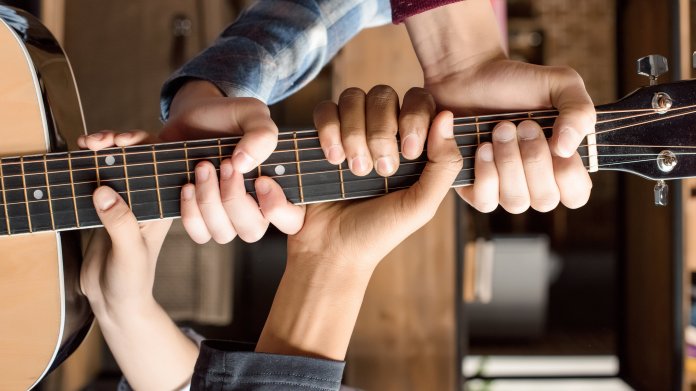 The journey of a thousand miles begins with the first step… and a good map. But what use is a map if you can’t read it? Similarly, with the guitar, as useful as it is to use diagrams that depict all the notes on a fretboard, figuring out how those notes are arranged is invaluable. And it’s pretty simple—we’ll show you the basic techniques to identify all those notes so you won’t have to keep referring to those charts.

The curious case of the seven strangers

It helps to think of each string on the fretboard as—hear us out here—a crowded bus, and the notes as commuters. But before boarding the bus, Mr A, B, C, D, E, F and G are strangers waiting in line at the same bus stop. Mr B strikes up a conversation with Mr C, and Mr E with Mr F. The others, Mr A, D and G, remain silent.

The bus arrives, and as he’s at the head of the queue, Mr E is first to board. There are 12 hanging straps along the aisle, and, being a considerate man, Mr E moves all the way back and grabs onto the strap—we’ll call it strap zero. The other guys then board the bus in alphabetical order.

Mr F is next up. He excitedly rushes in and stands beside Mr E to continue their conversation.

When Mr G boards, he sees the previous two guys chatting. And as a stranger, he leaves one space between them, like so:

The remaining commuters then board the bus in the same manner: Mr B and C carry on their conversation side by side, and everyone else leaves a space between them.

Here’s the trick: The low E string—the sixth string—of the guitar is exactly like the bus, and the notes on the string are like the passengers.

Notes along any string spread themselves out in a unique way. In music theory, these spacings are called “intervals.” The interval between E and F is termed a “semi-tone” or a “half-step,” and is equivalent to one fret on the guitar. And the interval between the strangers—F and G—is a “whole tone” or “whole step,” which is equivalent to two frets. But what about the other strings?

The next morning, Mr A is first in line to board the bus. Mr E and F, and Mr B and C have become fast friends, so they’re still chatting in pairs. Which means in the bus aisle, we’ll see this arrangement:

Again, it’s the same as the fretboard:

If the note on the open string is analogous to the first person to board the bus, then the other six notes are the other commuters, who line up using the same principle: No matter the initial passenger (the ‘open string’), everyone prefers standing apart—except Mr B, C, E and F. With this rule, going from string to string, you can derive the notes on the entire fretboard.

Using this fretboard pattern, you can even tune the guitar. Looking at the fretboard, you’ll notice that the same notes on adjacent strings are located five frets apart.

Because of this relationship, the notes from one string can be used to determine the notes on the others—which means you can tune the entire instrument based off a single string.

For example, let’s say you’re trying to tune the D string. From the fretboard map, you’ll know that the fifth fret of the A string, which is a D note, should sound exactly like the open D string. The other strings also exhibit this pattern. In the chart below, we’ve used the same colors for the open strings and their equivalent notes on adjacent strings:

This is why guitarists use the fifth fret of one string to tune the next. The only exception, however, is the second string, or the B string—if it were tuned like every other string, it would ring out a C note. But because of the way our hands and fingers are shaped, it isn’t the case.

In our next lesson, we will continue to look at some patterns that arise out of this fretboard map. Until next time.