Our Essential Blues Lessons are heating up! Here, we look at ways to combine what we’ve been learning so far into the basis for our own licks.

So, we’re a few months into the series and we’ve learnt a lot about technique, rhythm and some scale shapes that we will be using. Now it’s time for us to consider ways we can begin putting this knowledge together and creating some basic blues licks.

One of the great things about blues is how inclusive it is to play. It doesn’t matter what level you are at, you can still get the benefit of playing it. The licks we discuss in this lesson will be a great starting point and as the complexity of the series increases, these principles will still apply.

In this lesson, we will be combining a lot of the information we have learned over the last 10 lessons. We will be using some of the legato techniques we learnt in lesson seven, the pentatonic first shape and second shape and some string bending we learnt in lesson 10. Check out Guitar.com to catch up with any lessons you’ve missed.

Each of these five licks will be simple note formations combining elements of the technique and theory aspects we’ve learnt so far. As always, all examples are in the key of A minor. 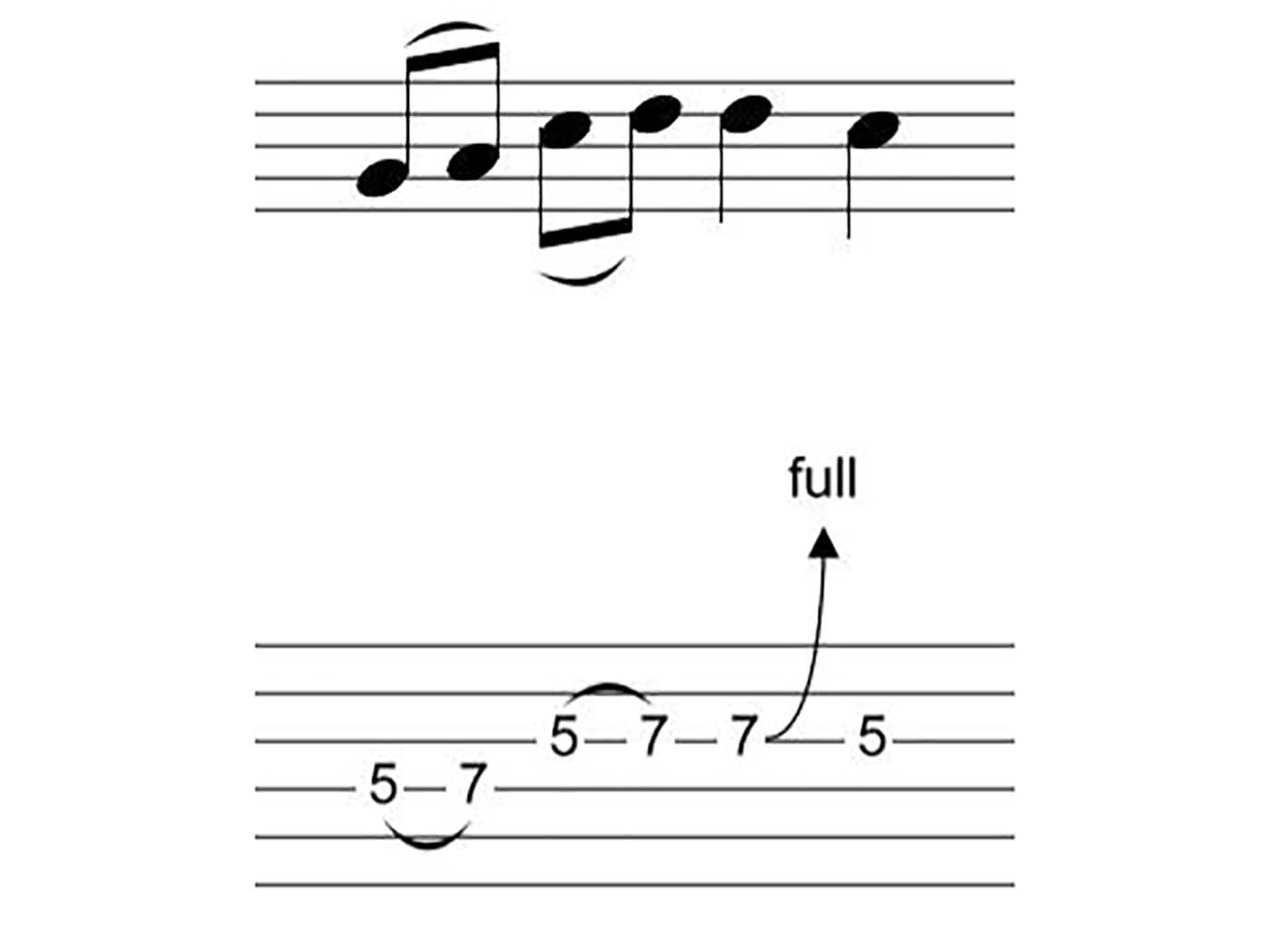 This first lick is a short lick based around the first shape of the minor pentatonic scale. This lick starts with two eighth-note groupings of hammer-ons ascending across the fourth (D) and third (G) strings on beats 1 and 2. Each of the two hammer-on groups are a picked fifth fret with a hammer on to the seventh fret. This is followed by a full-step bend which lasts for a quarter note and a fretted note on the fifth fret, which also lasts for a quarter note. 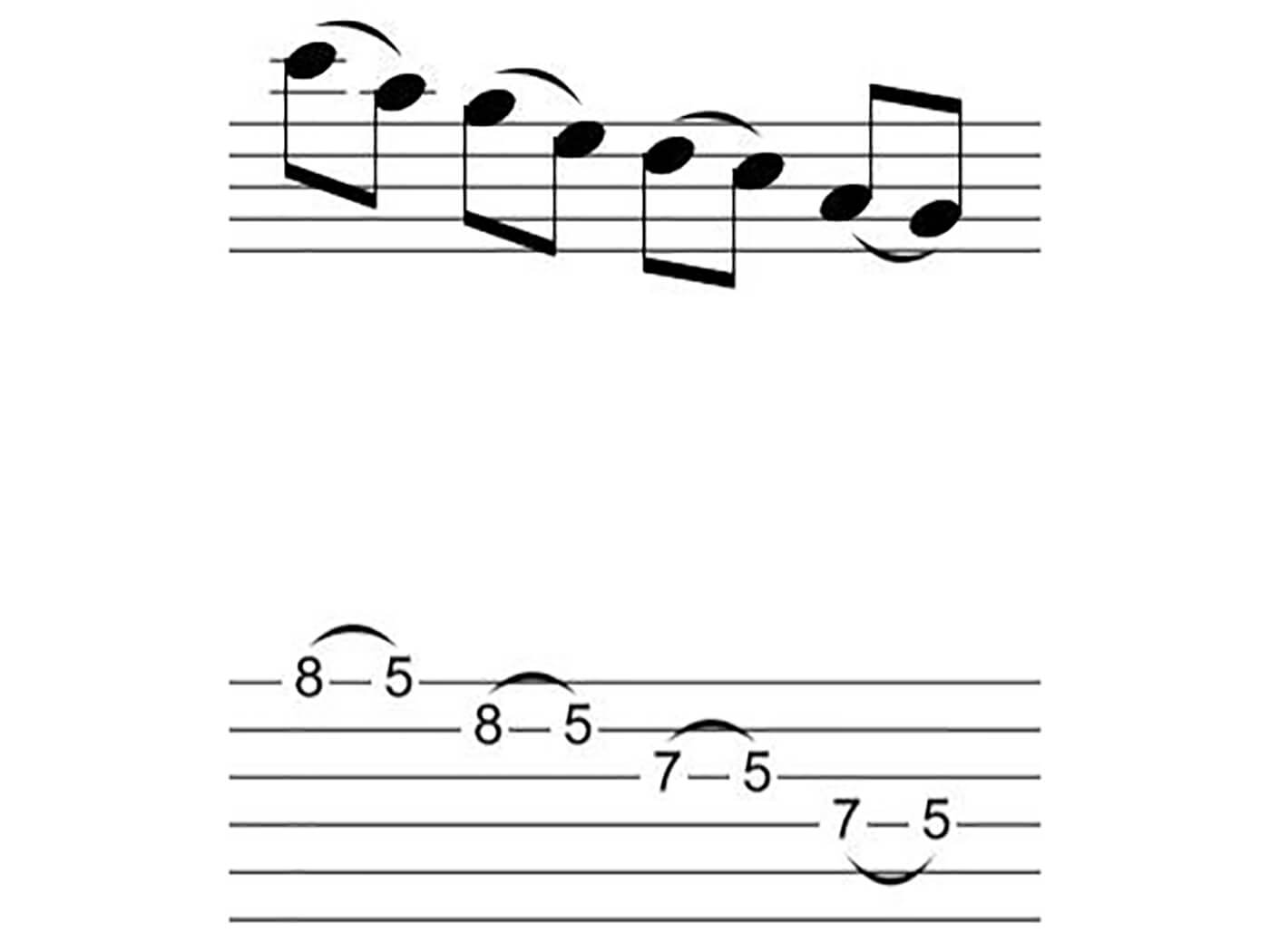 This lick utilises pull-offs and more of the scale in one go. It starts with descending eighth notes running through the first shape of the scale. On each beat in the first bar, you will be picking the highest note and pulling off to the lowest. Repeat this all the way down to the fourth (D) string. In the second bar, you begin with two bends, both a full step each, using the seventh fret of the third (G) string. This takes place on beats 1 and 2. On beats 3 and 4, you have a single picked note on each, the fifth fret on the third (G) and the seventh fret on the fourth (D) string. 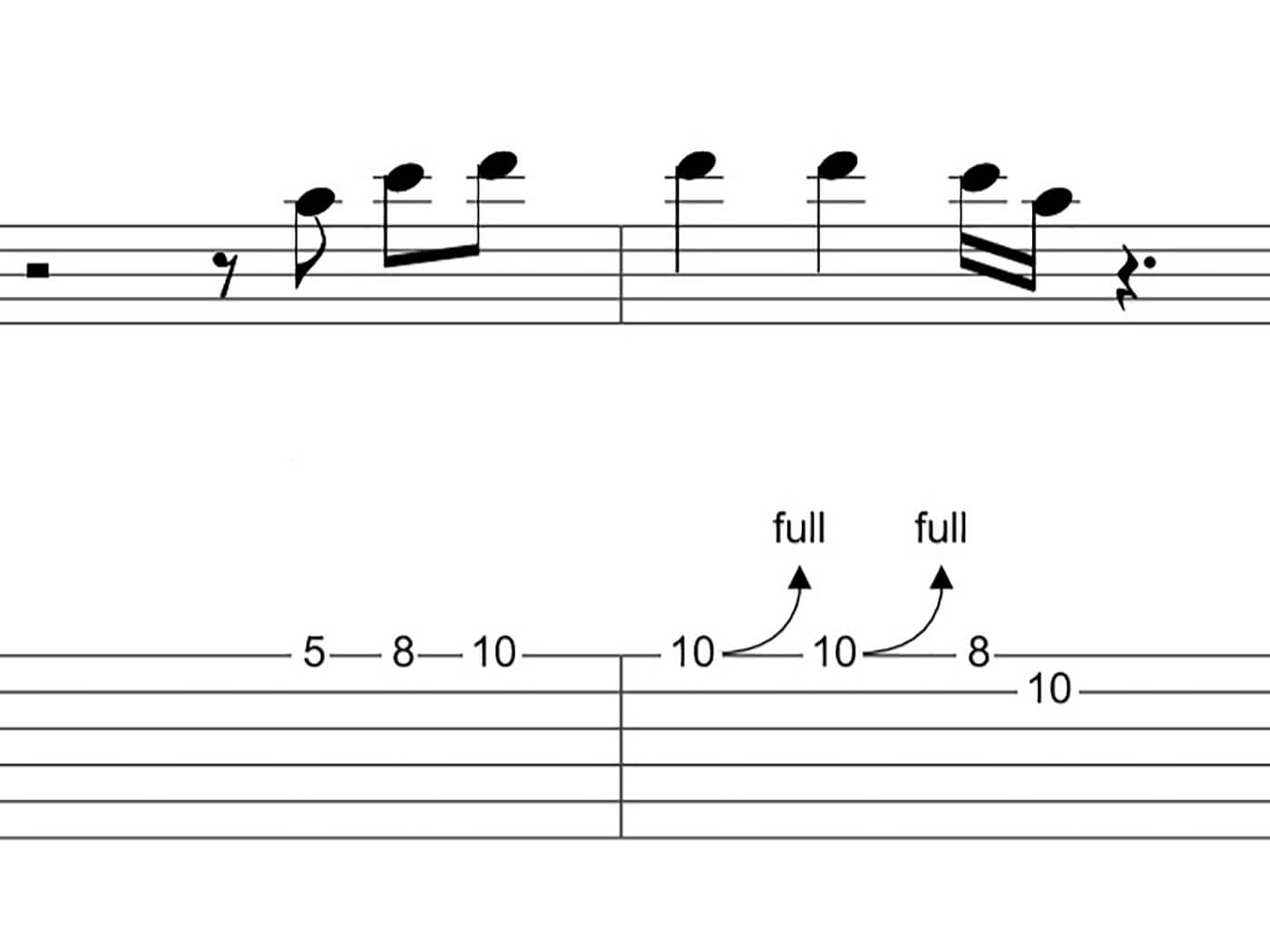 This lick combines the first and second shapes of the minor-pentatonic scale. The lick is predominantly based on the first (high E) string, starting with a three-note phrase that takes you from shape one to shape two. The initial three notes on the (first (high E) string are played on the ‘& 4 &’ of the previous bar. On the first and second beats of the second bar, you will be playing a full-step bend on the 10th fret. The phrase ends with two 16th notes moving from the eighth fret of the first (high E) to the 10th fret of the second (B) string. This lick has a BB King feel, so try to add a little swing to it. Keep loose and don’t worry about playing it too tight. 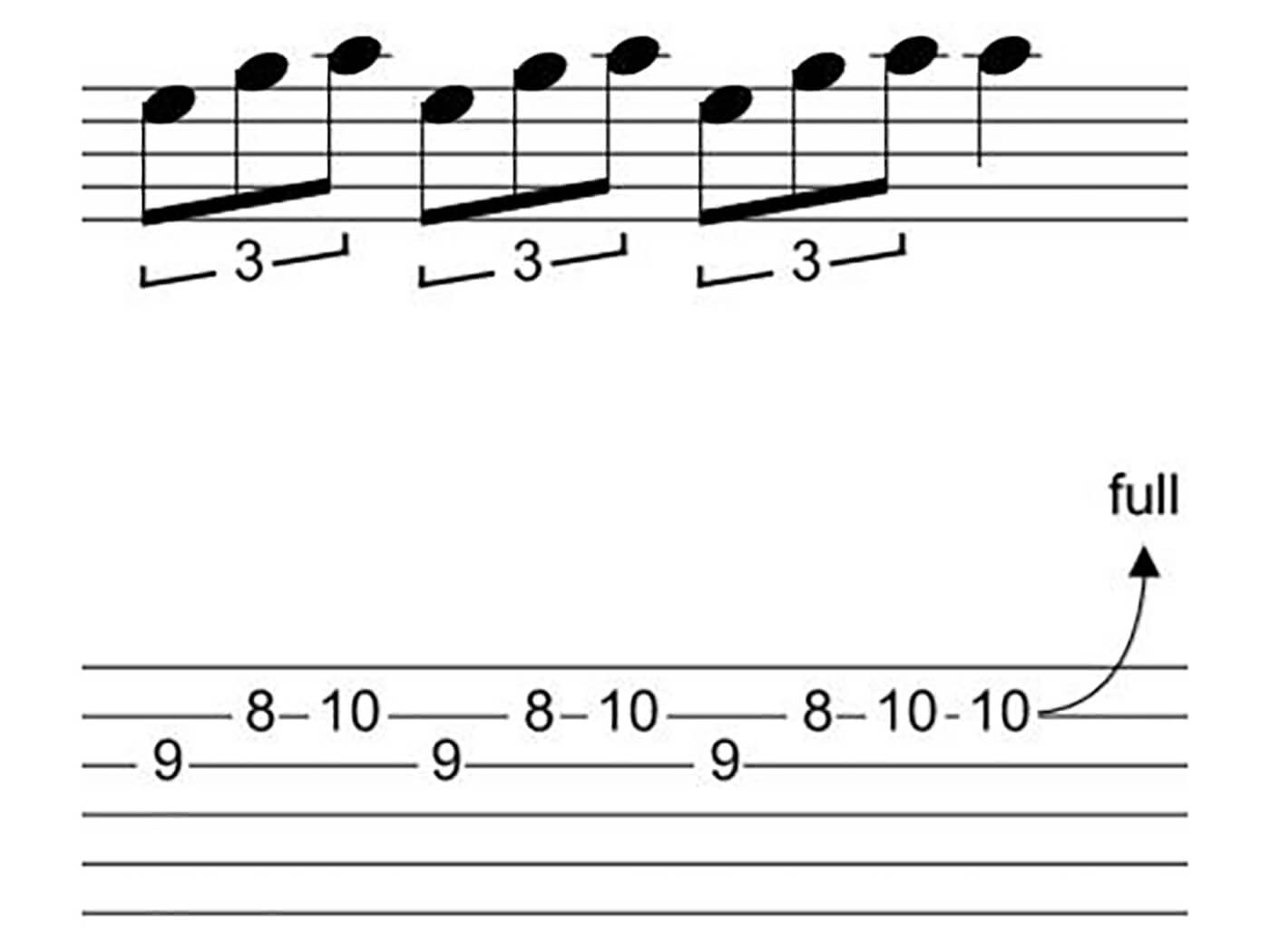 This next lick is similar to something Eric Clapton might play. The lick is broken up into triplets. A triplet is when three notes of the same length fit over one beat of music. This gives the lick a sense of urgency and creates the impression that it’s a lot faster than it is. The first three beats contain the repeated triplet. It is made up of the ninth fret on the third (G) string and the eighth and 10th frets on the second (B) string. The hardest part is getting the picking consistent. This is one to start slowly with. Each note should be the same length. You could also experiment with a hammer on between the eighth and 10th frets. 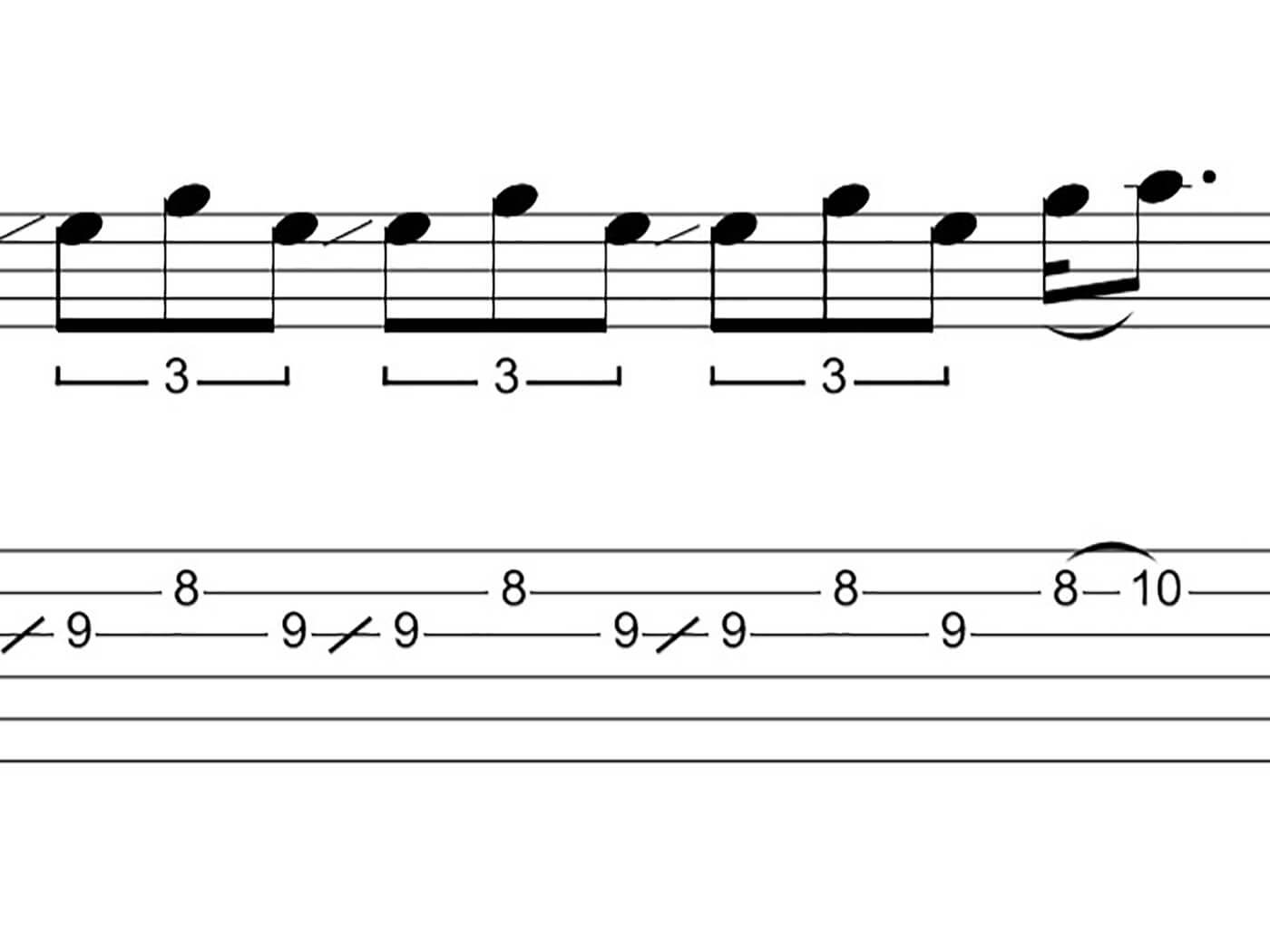 This lick is another triplet lick, but this time we will be using some sliding techniques to emulate a bottleneck-guitar-type sound. The triplet in this lick is ninth fret of the third (G) string, eighth fret of the second (B string) and ninth fret of the third (G) again. To emulate a slide guitar, you want to slide your finger into the ninth fret. It doesn’t matter where you start this slide, the main aim is to have the sound of a sliding note into its target note. Keep the slide limited to one or two frets, it’s not a slide where you need to hear the initial note, you just need the sound of the sliding string into the 9th fret.

The licks in this lesson are transposable to any other key using the first and second shapes of the minor-pentatonic scale. Using these principles, you can start to form your own ideas on lick building. Start with just a few notes and imagine what combinations you can play to make them sound interesting.

Think of technique, note length and melodies. Imagine a melody in your head and try to recreate that on the guitar. Think about how technique can embellish that melody to add flow to it.

Leigh Fuge is a guitar teacher and professional musician from Swansea in the UK. He has taught hundreds of students face to face and via the MGR Music platform. He has over 10 years’ experience working in the industry as a touring musician, session guitarist and teacher. To find a qualified guitar teacher in your local area, visit mgrmusic.com.