This month, we look at ways to get creative with just a guitar and chord sequences. Rod Fogg steers the ship of harmony through the dark waters of dissonance. 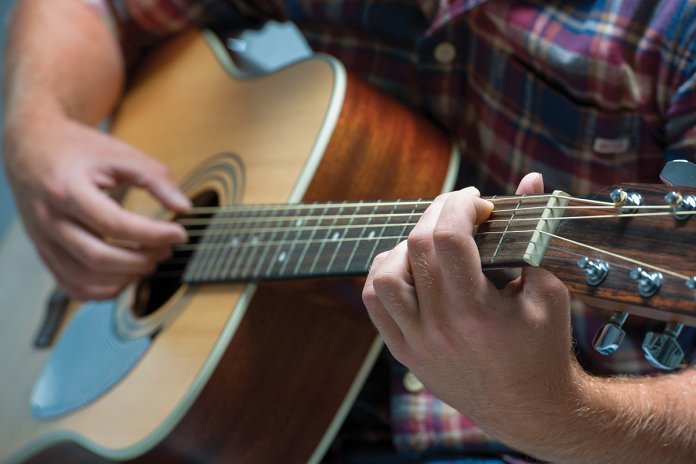 Let’s get started with the simple open-string chord sequence in figure 1: D, G, E minor and A. Strum it, pick it, count four beats in a bar and give the chords a bar each. While this is not ‘the’ four-chord sequence that seems to occur in so much contemporary music (that would be D, A, B minor and G), you can keep on cycling it around and could probably base an entire song on it.

Figure 2 introduces some ideas that will make this chord sequence a bit more interesting, resulting in the words “hey” and “oooh” being uttered by anyone who hears you play it. We are just adding one note per chord, but the result is that the top two notes in every chord are now D (third fret, B string) and the open E. Strum or fingerpick, emphasising the slight dissonance between these two notes, and maybe take the option to slip back to A at the end of the sequence so that we hear the Asus4 resolving.

Let’s say we want to take things in a different direction, and instead of cycling round and round we turn our four bars into an eight-bar chord sequence by adding four new bars, taking the harmony to some new places. The new four bars are going to be B minor, E, G and A; you will find the chords you need in figure 3. Play this eight-bar sequence through twice, and you could take the option to speed up the G and A chords second time through so that they both come in the seventh bar.

You could then return to D (major or sus2) in the eighth bar and bring a sense of conclusion to the sequence. At this point, you would probably be heading for the chorus, assuming that this eight-bar section was the verse. However, we are not done with this piece of music yet, and will save the chorus for next month’s Chord Clinic.

We now have an eight-bar chord sequence with an E minor chord in the first half and an E major chord in the second half. You should be finding that when you arrive on the E major chord you feel as if you have travelled away from the ‘home’ that the less adventurous first four bars suggest.

Figure 3 includes two other shapes, which we are going to use as passing chords – the way we describe those chords whose appearance is brief and whose function is to connect two other chords. Place the A sharp diminished seven chord in the second half of bar four, which now goes from A or Asus4 to A#dim7, arriving on B minor in bar five. Give it a try; it’s quick, but it seems to have a lot of power to push the sequence forwards. You can use the Dsus2/F# chord in bar two as a passing chord between the G and E minor chords in bar three. If you’ve been keeping up, you should be playing something like this:

I hope you’ll agree that it’s a long way from the four-bar sequence we had at the beginning of this lesson. Figure 4 takes a different approach to the same chord sequence, using higher voicings with sixths, sevenths and added notes but maintaining, except for the final D major, the open top E string.

There is something richer about this harmony that we are not necessarily claiming as better; but it’s definitely different – and the closely voiced notes in the middle of the chords combine with the sparkling open E to add a dreamy sweetness, which some might consider overdone. Try it at a slower tempo, playing arpeggios instead of strumming – it will probably sound best on an acoustic.

Play figure 4 through chord by chord, four beats each, but remembering to give the A6 and A#dim7 chords only two beats each. We have left out the Dsus2/F#, but you could slip in a passing F# bass note at the end of the G6 chord to lead down to the Em7.

The A6 chord is fingered using fingers two, three and four to encourage you to slide into the shape from the previous chord, perhaps after first playing the open A string. If the D6/9 chord at the end is a little too schmaltzy for you (I hesitate to use the “J” word) just go straight to the plain D major chord to finish. As we approach the final D chord, instead of using G major and A major we have gone for E minor seven and A seven – E minor seven being a good substitute for G in this situation.

Feel free to ignore the low E string in this Em7 and the preceding E7, as the higher bass note will give the chord a lighter texture. The way to get the most out of this kind of work is to back up the practice on the guitar with the theory that comes from the chord diagrams.

Check out the spellings of the chords (in other words, what notes they contain) and relate them to the intervals written below the letter names. Next time you get asked to play a mundane chord sequence, you will have some ideas of your own. More next month! 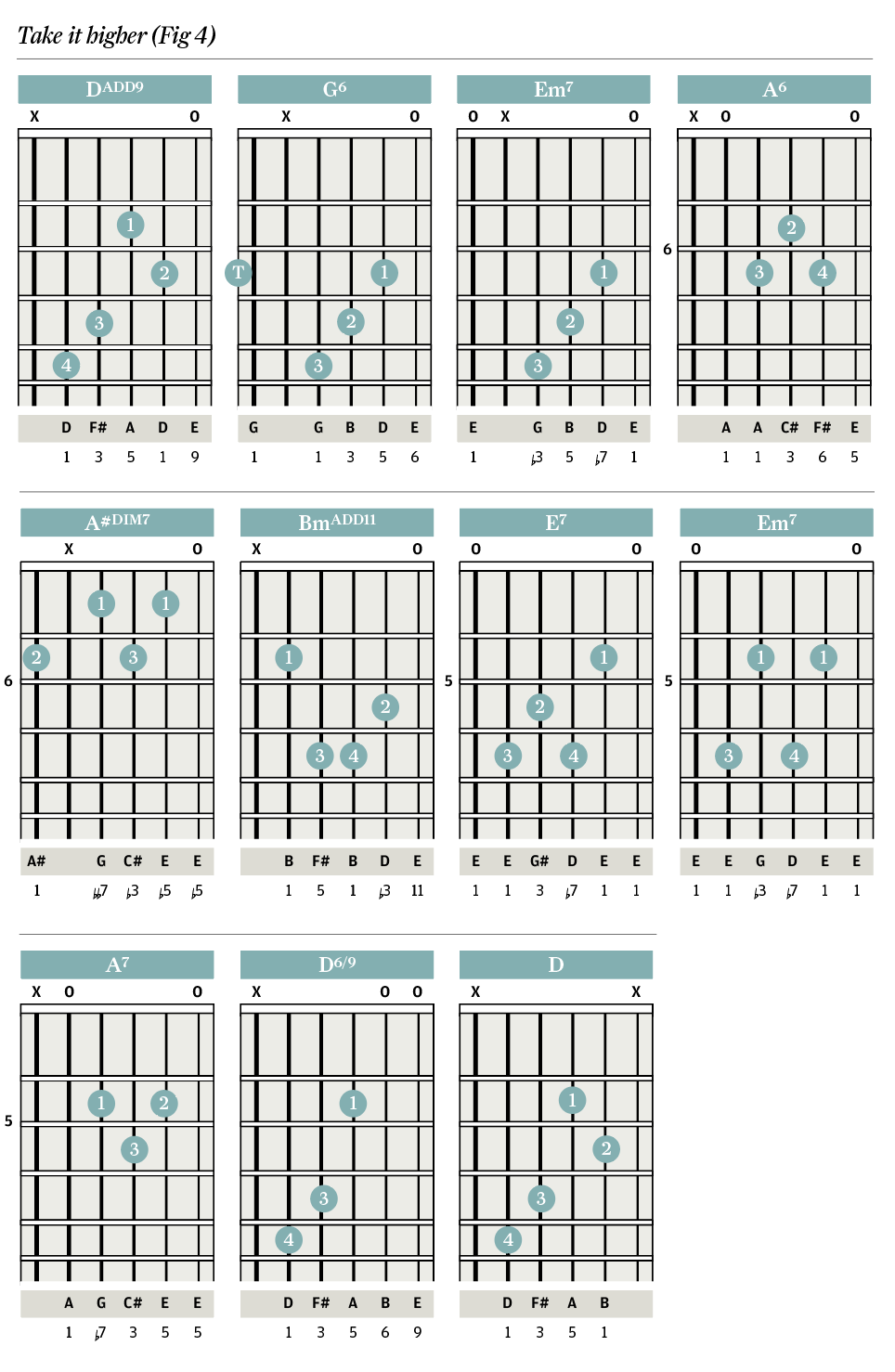