Chord Clinic: How to play chords like Pink Floyd Part 1

When Pink Floyd started out in the psychedelic mid 1960s, they were playing clubs, led by Syd Barrett on guitar. But once David Gilmour took over, they evolved into a stadium-rock band and began crafting extravagant concept albums. Now one of the biggest-selling acts of all time, you can bet they knew how to write an interesting chord sequence. 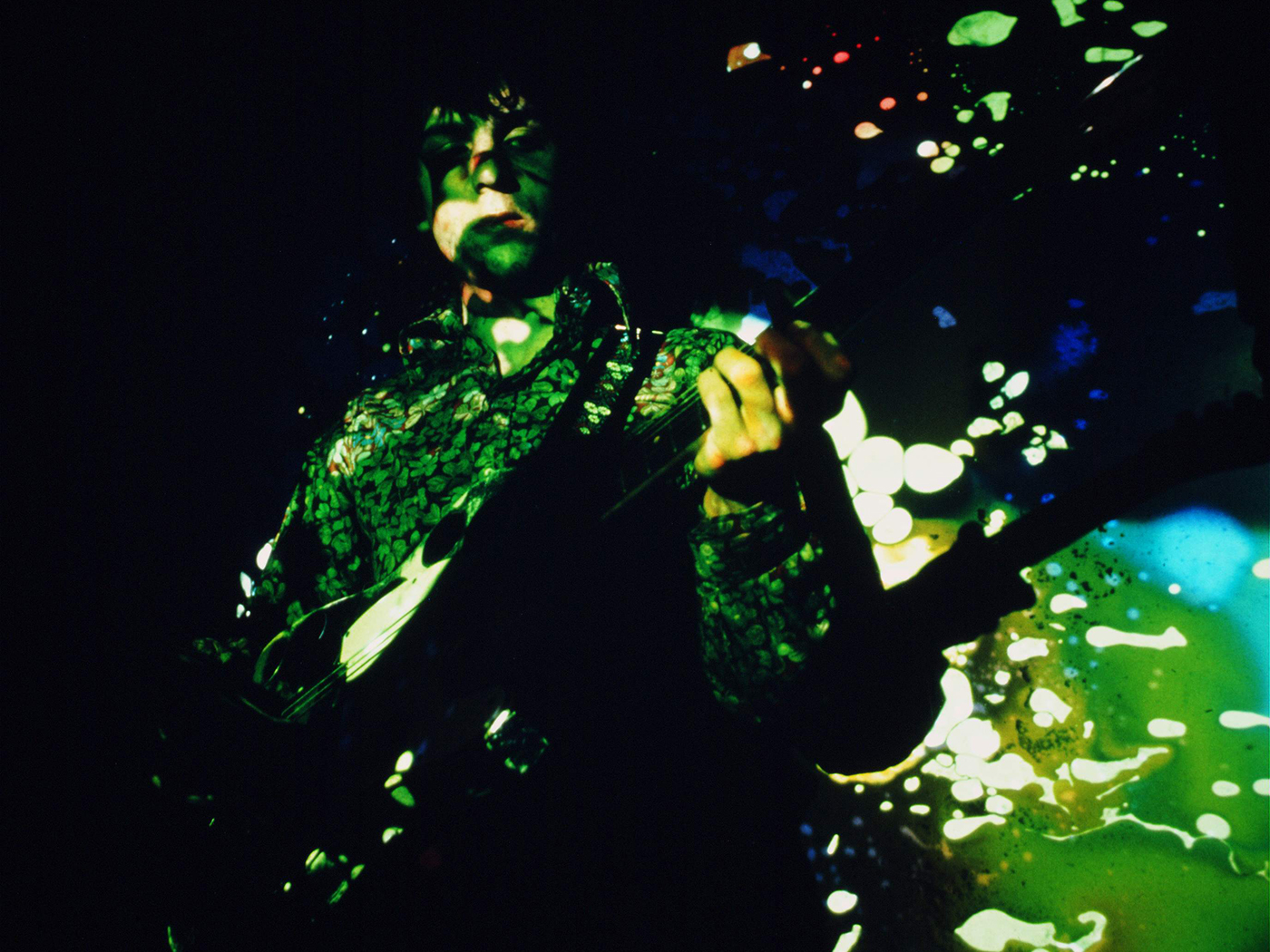 Pink Floyd made use of lengthy chord sequences and surprising key changes. In the first of this two-part Chord Clinic, we go back to the beginning, borrowing ideas from quirky and original songs from the Syd Barrett era, before moving onto the more complex sequences that allowed them to compose tracks of epic durations.

Some light palm muting and chugging downstrokes will help make sense of these five chords, which work their way down the guitar. A feature of much of early Floyd is its lack of symmetry; play three bars of A5 and a bar of G5 to make the first four bars. Then play a bar each of F#5 and F5, ending with two bars of E5.

This may be a simple eight-bar sequence but the unpredictable spacing of the chords adds a distinct character to the Barrett-inspired arrangement. You may have played five chords before, most likely in the context of metal or heavy rock. In this case, however, we’re looking for a clean sound, with a bright and bouncy feel. 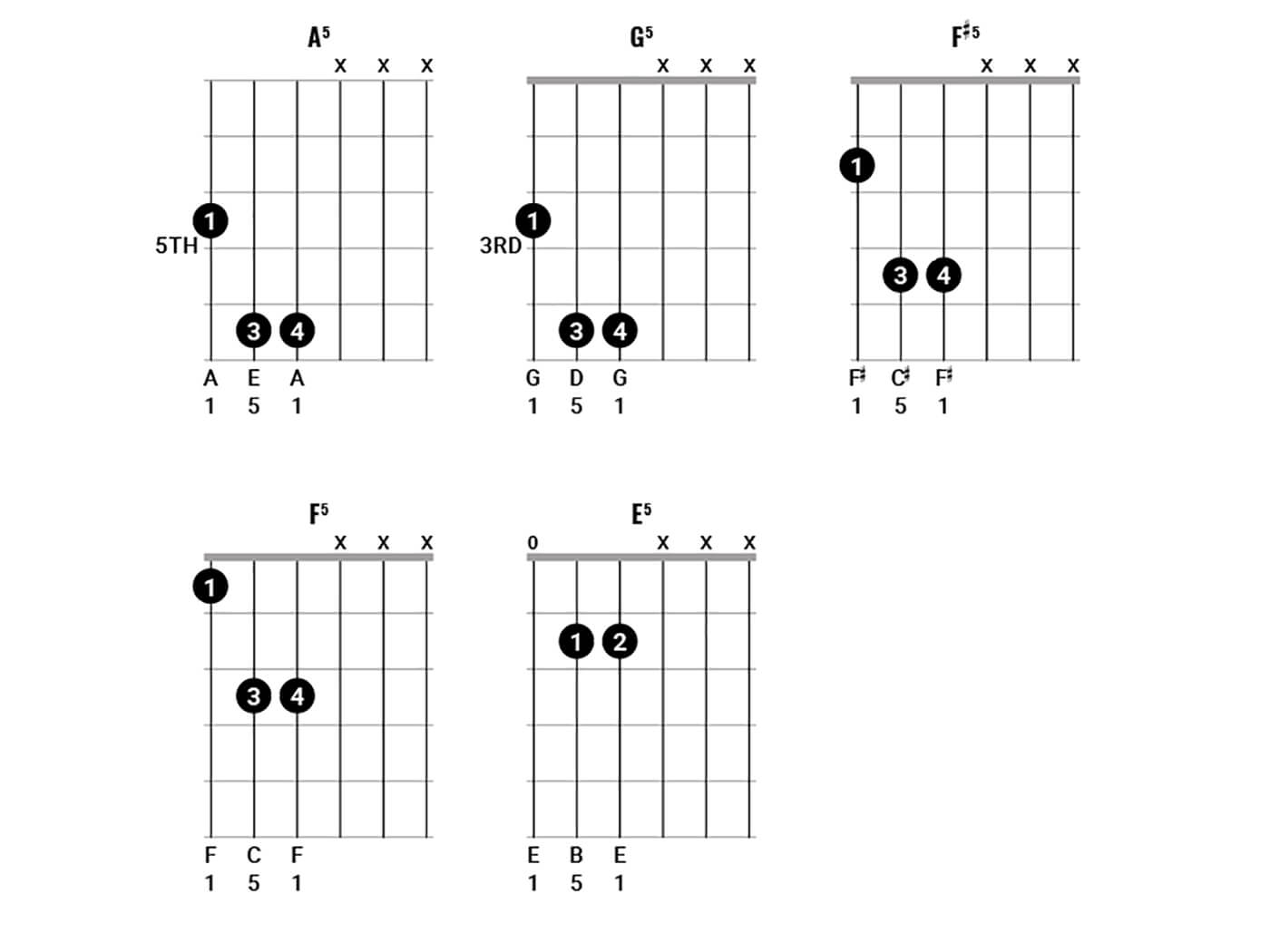 Here we have some conventional open-string chords. The A major gets a bar to itself, while the G and D chords share the next bar, with two beats each. Then we get two bars of E, right at the end of which, on beat 3, we have quick D and C major chords that lead to a repeat of this section. It’s a four-chord sequence but, as before, it lacks symmetry, which plants it firmly in the 1960s.

Figure 2 can also lead us back to the top of figure 1 and a repeat of the whole sequence. Figures 1 and 2 provide a short lesson in basic chord theory: notice that the five chords consist of just the root note and the fifth, whereas the major chords have the root, third and fifth. 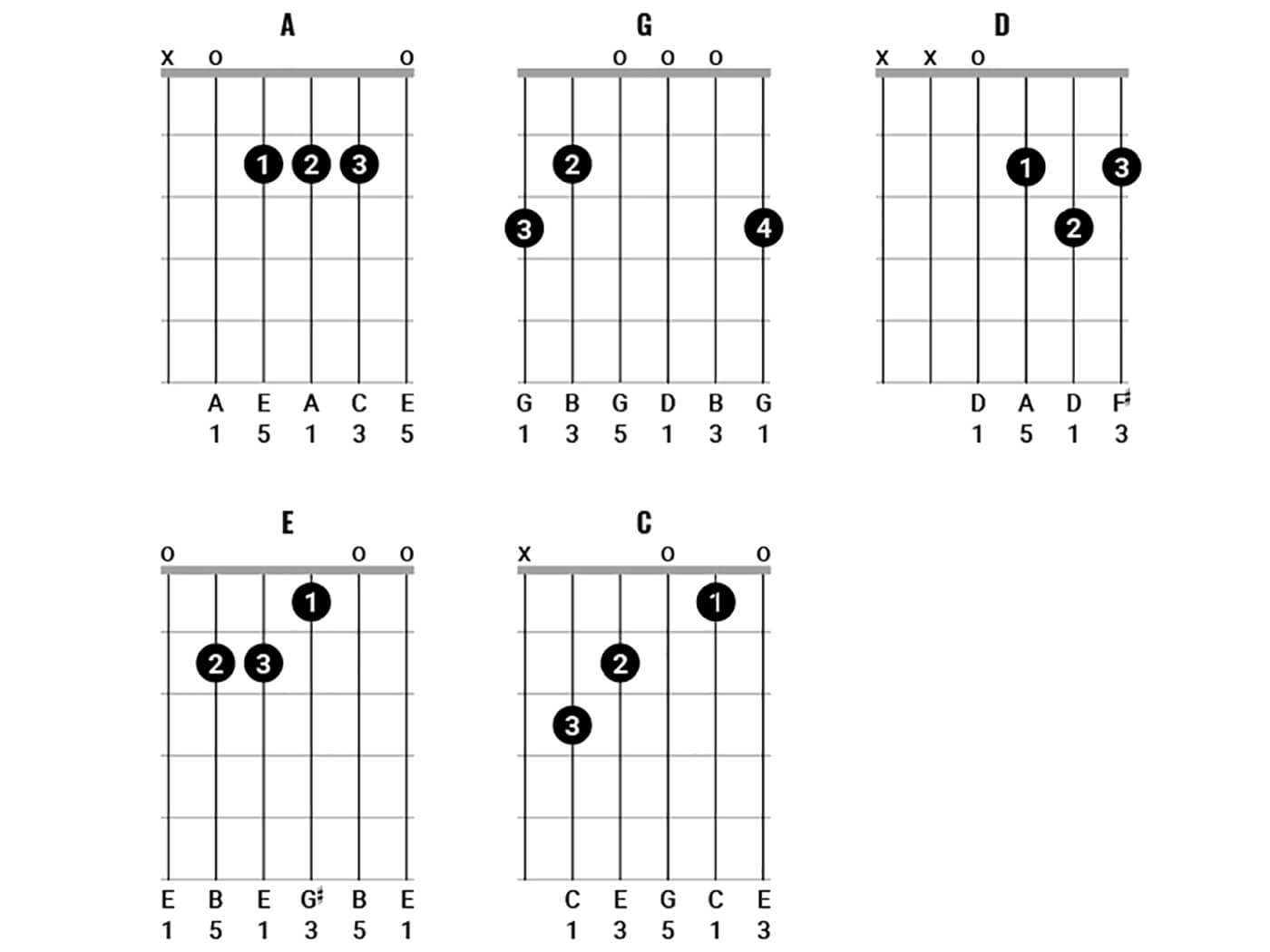 This is an aimless, deliberately dreamy Barrett-inspired sequence. Strum the first four chords, giving each one bar. Then play another bar of B minor followed by a bar of A minor and two bars of G, making eight bars altogether. You could also add a little spice by shifting to the D major chord slightly later, halfway through bar 2, rather than at the beginning.

The directionless quality of this sequence is achieved by going from G to B minor (chord III, never the strongest arrival point) and then returning more or less back to where you began. If this sequence served as a verse, we’d need to add something interesting to the chorus to liven things up, which brings us to figure 4.

This is an abrupt and surprising change of key. Play a bar of E and a bar of D three times before moving to the A chord for two bars. Try playing heavy downstrokes on the beat, each slightly detached from the next, staccato style. Finally, revisit the G chord from figure 3 to re-establish the original key. You can repeat the whole sequence.

Chord progressions like these, made up of barre chords, can be quite a workout for the fretting hand. Relax and try not to pull with your elbow – a gentle squeeze from the thumb should be all you need to get your index finger flat across the strings. Barring is typically easier on electric guitars due to their lower action but, if you’re up for a challenge, try this out on your acoustic.

Our final chord sequence is an example from the David Gilmour era, perfect for use as a slow, quiet and engrossing introduction. Alternate between two bars of F# minor and two bars of C# minor. Keep playing – but remember that this kind of rock is never in a hurry to get where it’s going. Build to a climax and, after your last C# minor chord, play one bar of A# minor, one bar of the A major from figure 4, and one bar each of the two G# chords, stopping on beat 1 of the G# major to let it ring.

Then it’s back to the top to begin the sequence again. Don’t be surprised if switching back to the F# minor chord after the G# chord seems a little uneasy – it’s because the music has modulated. This means it has changed key, and the new key is C# minor. We’ll look at what happens next in the second part of this two-part Chord Clinic. Meanwhile, have fun recording this sequence and see if you can add a solo based around the F# minor pentatonic scale over the opening chords. ­­­ 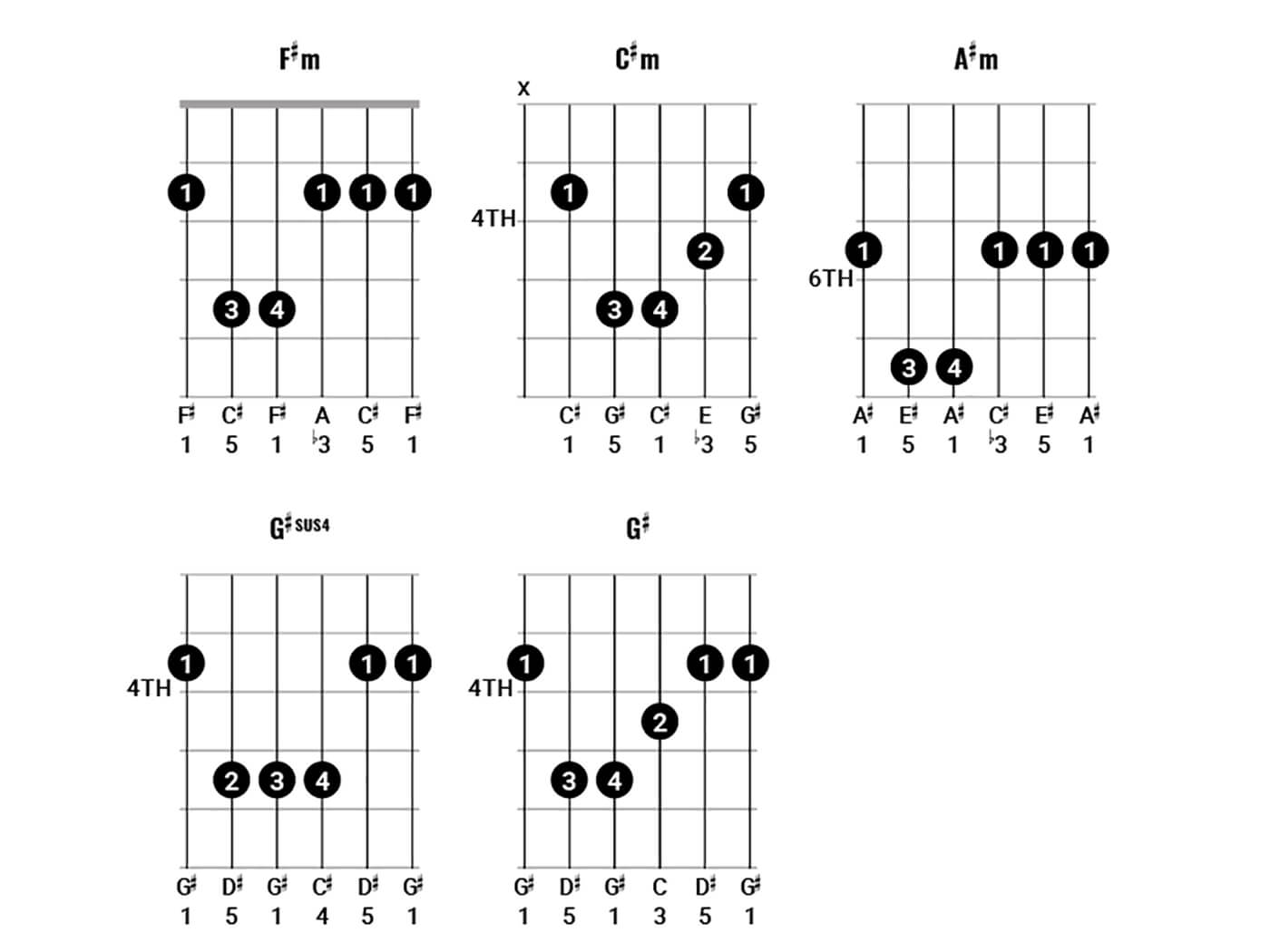