So far, we’ve looked at adding interesting notes to chords – suspended seconds and fourths, sevenths and added ninths. Here, we move on to altering the bass note of a chord to something other than the root. 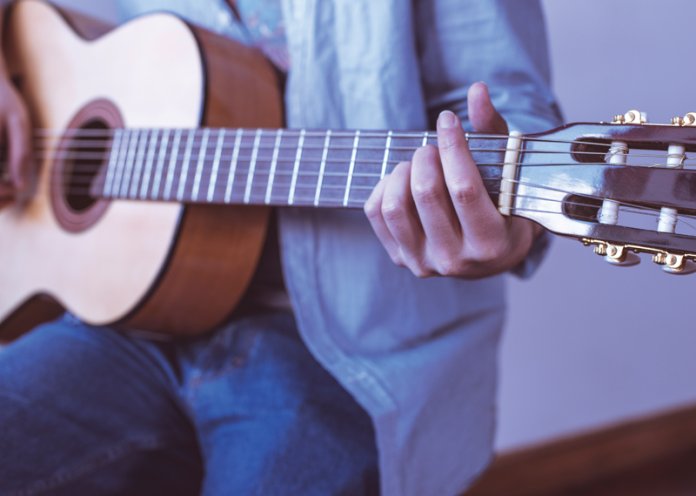 This kind of chord can be strummed but you have to be accurate with the pick – try picking the bass note first and then strumming the upper notes of the chord. It might be better to put the pick down and play them all fingerstyle, using your thumb on the bass note and picking out an arpeggio pattern with the fingers. 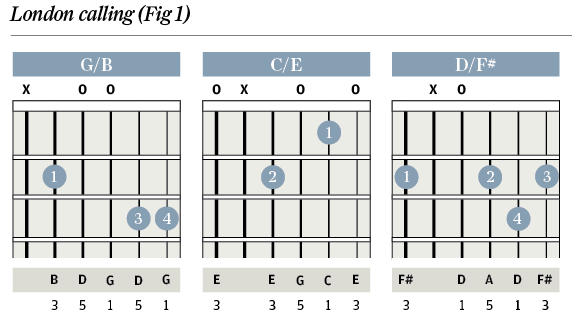 Figure 1 introduces G/B, C/E and D/F#. Technically, these are all first inversions as the third of the chord is in the bass. All three sound good without the note that’s on the top E string, it’s only in the diagram for the sake of completeness.

To hear them working in context, you need to try playing one bar each of: C G/B Am G F C/E F G, which is reminiscent of Ralph McTell’s Streets of London, Pachelbel’s Canon and one or two others. Its main feature is the stepwise movement of the bassline, and I’m assuming you can find good versions of the root position chords for yourself in this and the coming progressions. To make use of the D/F# try this: D D/F# G A.

This is similar to the opening verse of Ed Sheeran’s Thinking Out Loud. For the G and A chords, it will sound good if you confine your picking to the root note and the D, G and B strings. 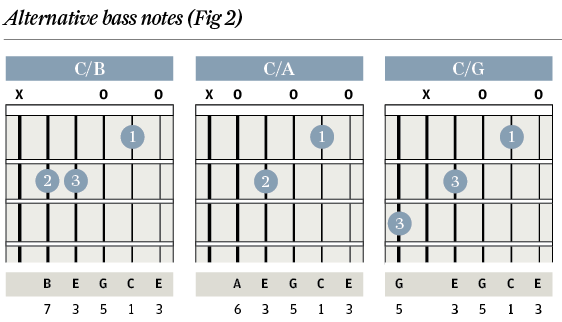 Figure 2 takes a look at some alternatives to the first chord sequence in figure 1, and also introduces the idea that the bass note does not have to be a note from the chord. Use C/B instead of G/B, C/A instead of Am, and C/G instead of G, then carry on as before. C/G is a C major chord with the fifth in the bass, which makes it a second inversion. The difference in the two progressions is subtle, but staying on the C chord while the bassline moves makes the arrival on F in bar five seem more important. Try it for yourself and see what you think.

Figure 3 switches to the key of A minor; if you play the four chords in sequence, it’s evocative of the opening to one of George Harrison’s finest songs – While My Guitar Gently Weeps. Follow these four chords with Am, G, D and E. Then play them again, followed by Am, G, C and E.

Slash chords can throw up some interesting anomalies. For example, Am/F# is the same as F#m7b5, and Am/F is the same as Fmaj7. Both would be technically correct, but the slash chord notation somehow gets to the heart of what’s really going on in the  music, and for this writer is preferable in this case.

Figure 4, on the following page, takes this sequence to the key of D minor. It’s worth tracking down the Beatles’ Anthology version of While My Guitar… for inspiration. Harrison played these chords with a capo at the fifth fret on his solo version. Can you transpose the rest of the chords in our A minor progressions to this new key? They are C, G, A the first time and C, F, A the second time.

In figure 5, we have a similar moving bassline, this time under a D major chord. You could try D/Bb as an option for the fourth chord, but in this case we’ve gone for plain Bb major, being inspired by Christina Aguilera’s Beautiful. The original uses the piano, but with fingerstyle arpeggios and a capo on the first fret you can do something in a similar vein on the guitar. Try adding in an open E string at the top of your Bb chord arpeggio. D/C could be described as D7 in third inversion, which means the seventh is in the bass. Also notice that D/B is the same as Bm7, but again the slash chord notation seems to reveal more of what this chord sequence is about.

I hope these examples have whetted your appetite for some experimentation in the world of slash chords. Onwards and upwards? With all these descending basslines, I think it’s a case of onwards and downwards…