Remove the third from your chords and you get the appropriately named powerchord, a staple of rock, punk and pop music. Here's how to beef up your playing using only two notes.

Previous Chord Clinics have tended to concentrate on adding notes to chords (such as sevenths, ninths and elevenths) or altering the notes in a chord (such as sus2 or sus4). This month, we are going to take a look at what happens when you take a note away from the basic three-note triad.

There is only one candidate for removal – the third. If you remove the fifth, you’re left with a root and a third, which doesn’t sound all that different from the full triad. If you remove the root, you’re still left with what sounds like a chord, except the third now sounds like the root. Take away the third, however, and you are left with a bare fifth, which can sound more effective than major and minor chords, particularly when you have the amp cranked and there’s some distortion.

Distortion causes each note you play to generate prominent overtones – that’s why it sounds so fat. If you keep the third in the chord, the overtones from all three notes can end up as a pile of mush, in conflict with each other. So things sound clearer but heavier if you leave out the third. Chords that contain just the root and the fifth are known as 5 chords, fifth chords, 5th chords or powerchords; it’s probably best to call them five chords. Technically, they are diads (two notes) not triads (three notes), and some people argue that they are an interval (perfect fifth) and not really chords at all because they don’t have that root-third-fifth structure. But it seems to me that in rock music they function in the same way as chords – and that’s what we’ll call them here. 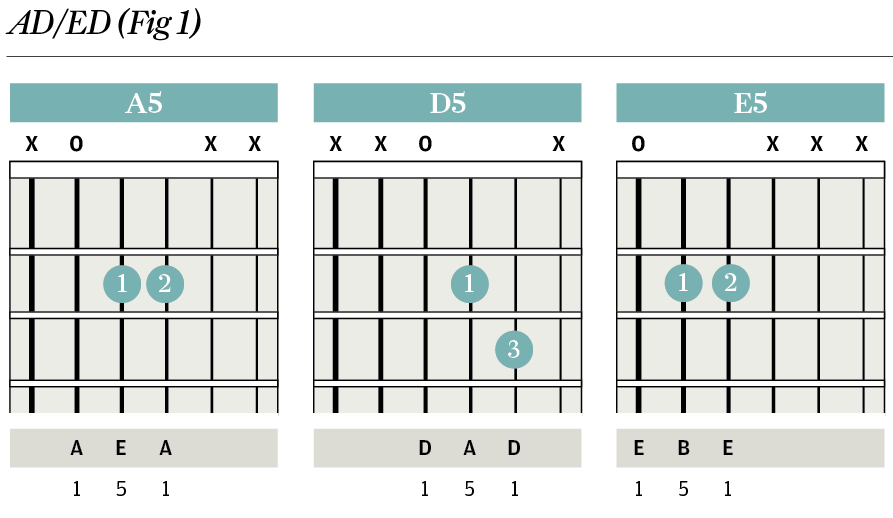 Take a look at figure 1, which introduces A5, D5 and E5. Hold on, you might be thinking, these are three-note chords. Well, the fattest five chords happen when you double the root note an octave up, giving you the root, perfect fifth and octave. One thing with most five-chord shapes is that you will need to do some damping to avoid sounding all those unwanted open strings. Wrapping the thumb over to touch the bass strings is useful for A5 and D5; it also helps if you don’t go too wild with the pick, aiming to pick just the three notes of each chord.

These chords sound good in the order here, but you could also try E5, D5 then A5, and if you get the rhythm right it might sound similar to AC/CD’s Back In Black. Add a descending blues scale riff to take it further. 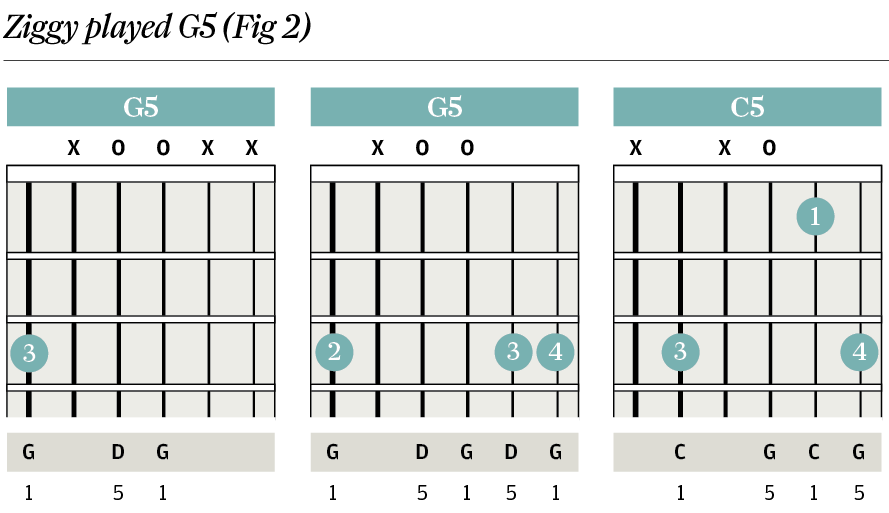 In figure 2, the three-note G5 chord includes a muted A string. Try starting on A5 for some Van Halen-style rhythm parts. The second chord shows that you can also stack up the roots and fifths to produce a five-note G5 chord. For the sake of completeness, we’ve included a stacked-up C5 as well, although G5 also sounds good followed by Cadd9, keeping the same top two notes. You could also experiment with G5, followed by D and Dsus4, wiggling your little finger on and off as you strum. Then play some slash chords (see last month’s lesson): C, C/B, C/A and round again. Ziggy, as Mr Bowie pointed out, played guitar… 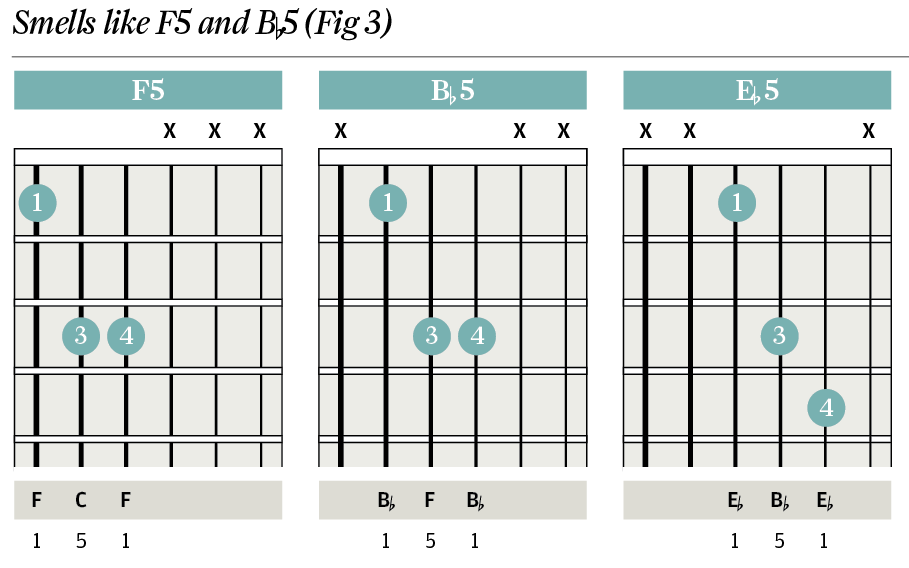 One of the coolest things about five chords is the ease with which they can be moved around the guitar. The chords in figure 3 are movable – they include no open strings and each shape can be moved and played at every fret. You can slide them around to your heart’s content and invent your own five-chord riffs, but to name them it’s best to recognise where the root note of each chord is and then familiarise yourself with the names of the notes on that string.

So, basically, F5 is the E5 shape moved up one fret. Continuing up one fret at a time from there would give you F#5, G5, G#5, A5 and so on, until you reach E5 again at the 12th fret. Bb5 is the same as A5, moved up one fret. Carrying on fret by fret will give you B5, C5, C#5, D5 and so on, until you reach A5 again at the 12th fret. Knowing your chromatic scale is clearly useful with these and other movable chords. Just remember, there is a sharp between every note – except between B and C, and E and F. For theoretical reasons related to key, we often use flats instead of sharps. F# is the same as Gb, G# is the same as Ab and so on…

Try sliding the F5 chord up two frets to G5 for The Kinks’ You Really Got Me, or keep the F5 and Bb5 and slide up to Ab5 and Db5 at the fourth fret for something akin to Smells Like Teen Spirit by Nirvana. There are hundreds of bands who have made use of this type of chord on thousands of songs, from pop to rock to metal to… well, maybe not jazz funk but you get the idea. The Eb5 chord shows that the D5 from figure 1 also makes a movable shape, albeit somewhat high in pitch. 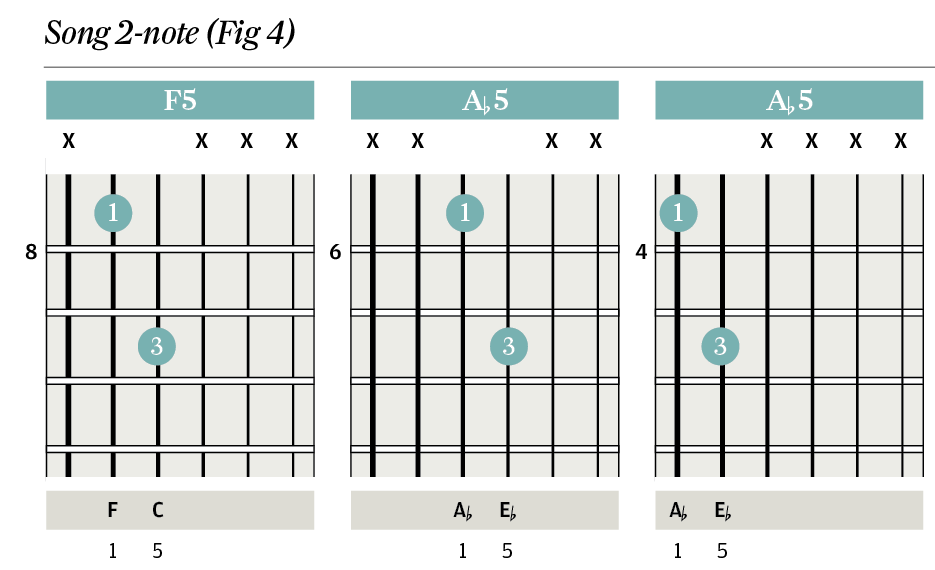 You don’t have to add that extra root note at the top of a five chord. You really can play just the root and the fifth, and when it comes to sliding chords around this can make things much easier. The first two chords in figure 4 were used in a different order to make Blur’s Song 2, which has one of the best guitar riffs of all time. The recorded version, at least for the intro and verses, demonstrates that you don’t have to use distortion when playing five chords. Playing in this style, though, is harder than it might seem; accurate picking and left-hand damping are essential.

Turn a fifth upside down and you get a fourth, which coincidentally happens to be the interval between most of the guitar’s strings. You have heard this interval if you’ve ever listened to the intro to Deep Purple’s Smoke On The Water. Because we don’t generally recognise there being such a chord as D4 or A4 (though personally I think that would be just fine), we have to say G5/D, or D5/A, meaning G5 with D in the bass, or D5 with A bass. As you can see from the first three chords, these can be moved around, too. Play them by flattening your first finger across two strings. The other shapes in the example show that these chords are playable on other pairs of strings too. 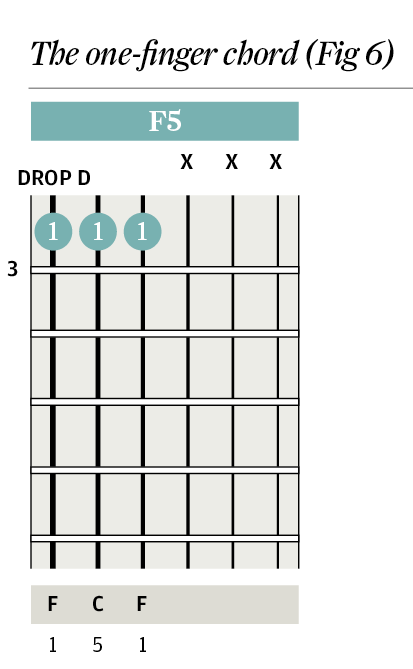 We end with a new departure for Chord Clinic – drop D tuning. Grab the tuning peg for your low E string and sound the note at the same time as your open D string. Around a quarter or half a turn down and they should be an octave apart. You could also use a guitar tuner. The great thing about drop D tuning is that you can play a five chord using just one finger, and the lower pitch makes it sound even heavier.

Just remember to recalibrate your brain to the change of notes on your E string. F5, for example, is now at the third fret and Eb5 is at the first fret. Ab5, Bb5 and C5 played in this way (6th, 8th and 10th frets) sounds similar to the heavier “woo hoo” section in Song 2. Crank it up!

Squier goes for the gold with 40th anniversary collection