Seventh chords can evoke dreamy or unsettling emotions, as exemplified on George Harrison’s Something or David Bowie’s Life On Mars. We unravel the real value of the seventh…

Major and minor chords are built from a root, third and fifth, so the next logical note to add to a chord is the seventh. We’ve seen that thirds come in two flavours – major and minor. Sevenths are the same. The easiest way to understand the difference between a major seventh and a minor seventh is to compare the interval to an octave. If you take a look at the C major chord in figure 1 you will see an octave between the note C on the A string and the note C on the B string.

Try playing just those two notes on their own to hear the octave. To make the Cmaj7 chord you release your first finger and sound the open B string. So the major seventh is one semitone, one fret or (in the US) one half step short of an octave. This means that the formula for a major seventh chord is a major triad (C-E-G) plus a major seventh  (C-B), and to describe the chord we call it a “C major seven”.

To make the C7 chord, put your first finger back down on the B string and add the B flat, which is the minor seventh, using your pinky on the G string, third fret. The minor seventh is two frets lower than an octave. So the formula for a “seven” chord is major triad (C-E-G) plus minor seventh (C-Bb); we refer to it as “C seven”. Remember the numbers at the bottom of the chord diagram show you how the notes of the chord relate to the major scale built on the same root.

In this voicing Cmaj7 has the notes 1, 3, 5 and 7, and the third is doubled. C7 has just 1, 3 and b7 because in this voicing the flattened seventh is actually taking the place of the fifth. Both the third and the root are doubled.

As you can see, Cmaj7 and C7 are not the same thing. The major seven has a dreamy quality and is harmonically stable. It’s quite common for a jazzy tune to end on a major seventh chord. The seven chord, on the other hand, has an unstable quality and seems to want to push on to another chord – in the case of C7 the next chord would often be F major. The F shape we have here uses the “thumb over” approach, together with some strategic muting of open strings.

Some chord sequences use major seven and seven chords in succession. The four chords in figure 1, played one chord per bar, will give you the opening of George Harrison’s Something, which has an amazing chord sequence for all of its nine-bar verses.

One more bit of theory: C7 is a type of chord known as a “dominant seventh”. To explain, a chord with a major triad and a minor seventh occurs naturally when a chord is built on the fifth step of a major scale, and the name of the fifth step of the major scale is the “dominant”. Too much theory? Just get used to the idea that if someone asks you to play a dominant seventh chord you need to play the one that has a major triad with a minor seventh. 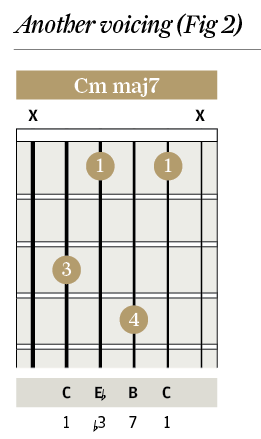 Figure 2 demonstrates the same chord sequence as above, but this time starting on A major – the fourth chord would be D major. Simply alternating between the major chord and the major seventh chord can sound good, too, as Noel Gallagher discovered when writing the bridge to She’s Electric (‘And I want you to know…’). The Red Hot Chili Peppers start the chorus of Universally Speaking (‘C’mon baby ’cos there’s no name for…’) in the same way. 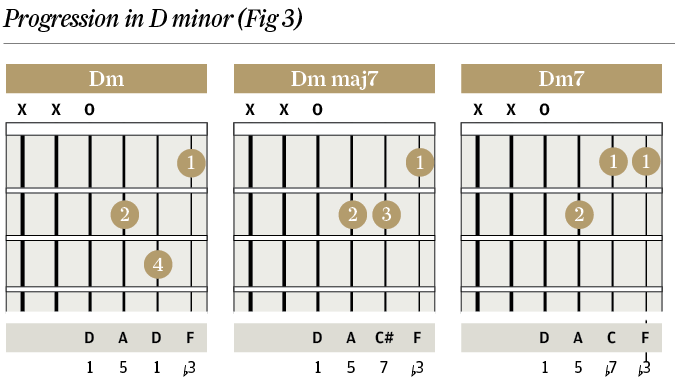 Playing the sequence in A major and G major enables you to see the logical progression from major chord to major seventh to dominant seventh on the guitar fingerboard. In 3, if you are playing Something in the key of G, the chord after G7 would be C. However, we’d be tempted to go for E, mainly because we were thinking more of Life On Mars – the David Bowie song. I’m always tickled by the fact that S Club Seven’s song Reach has exactly the same opening chord sequence. Put a capo on the first fret in order to play it in the original key. 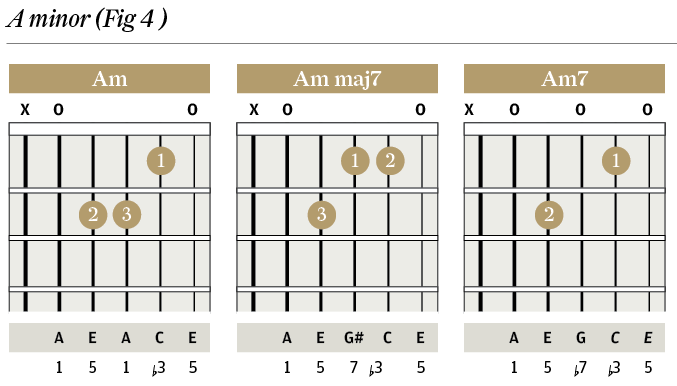 Staying with G major for a moment, we could also try a few low voicings for the added sevenths. Check out figure 4; both these voicings work well and I particularly prefer the chunky low-voiced G7 chord to the somewhat folksy example from figure 3. Try omitting the doubled third on the A string on these shapes  – mute it with the underside of the finger that’s on the sixth string. Re-finger the chord in any way that suits you if you’re going to try this. 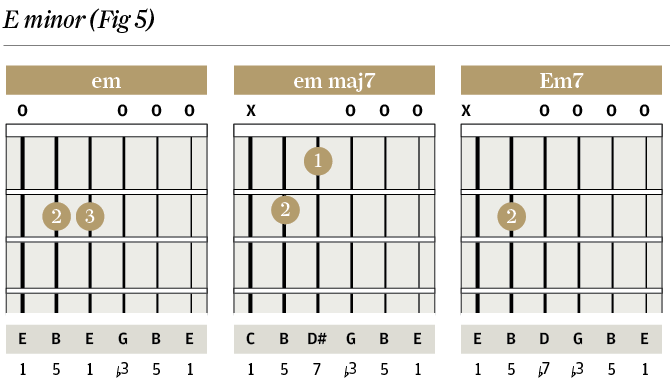 Figure 5 shows the major seventh and dominant seventh chords in the key of E. The D sharp on the D string in the Emaj7 chord can sound a bit murky, so figure 6 re-voices the same two chords with the seventhsan octave higher. The first one is a bit of a stretch, but it’s worth it to hear the major seventh (D sharp) clashing spectacularly with the open E string. It is something of a relief when the chord moves on to E7. By the way, for Something in this key, the next chord would be A major. 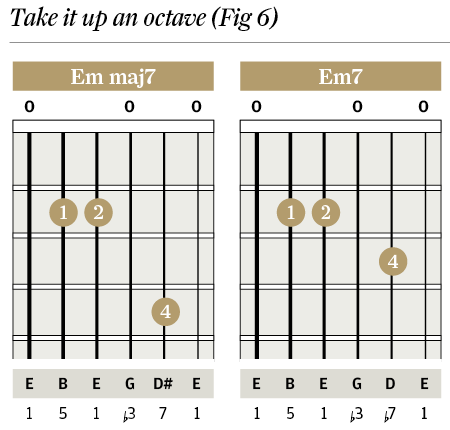 This is probably a good place to mention that sometimes the maj sign is replaced by a small triangle, or Delta symbol – Δ, so Dmaj7 can appear as DΔ7, but this mainly happens in jazz chord charts.

Figure 7 takes you to the key of D, and you can clearly see the root on the B string progressing down the guitar one fret to become the major seventh, and then one fret more to become the minor seventh in the D7 chord. Play G major for the next chord. 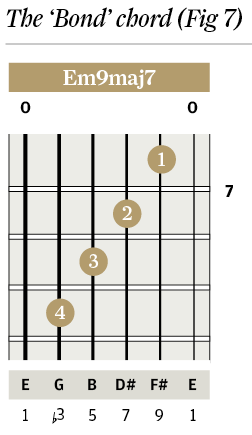 Major seventh chords occur naturally on first and fourth steps of a major scale. In C major, that would give you Cmaj7 and Fmaj7 (see figure 8). Capo the first fret and play a bar of each and you will have the intro to 60s star Herb Alpert’s This Guy’s In Love With You. Back then, composers such as Burt Bacharach were not afraid to use major seventh chords or, come to that, minor seventh chords.

But we are going to save them for next month, together with a more in-depth look at the uses of dominant seventh chords. Just to finish off, figure 9 introduces a set of chords built on A, with some sweet, chiming sevenths high up on the top string. Could
they inspire you to write a love song?