An introduction to major 7th, minor 7th and dominant chords, and how to deploy them while you play. 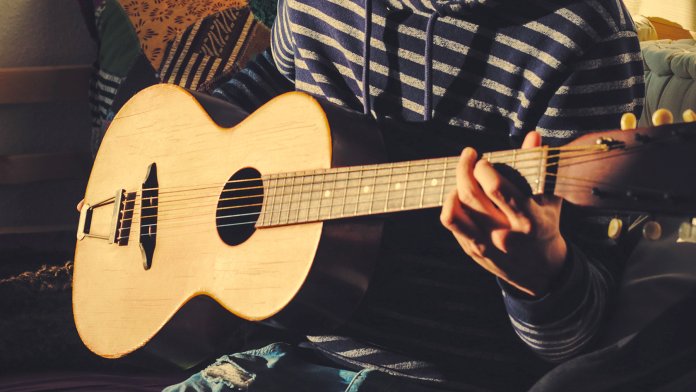 Now that you’ve got major and minor chords under your belt, it’s time to move to more advanced territory. We’re talking about 7th chords. As the name suggests, this class of chords has another interval – the 7th – thrown into the mix, resulting in jazzier sounds.

After today’s lesson, you’ll be able to:

What are 7th chords?

7th chords are a unique class of chords that comprise four chord tones (or unique notes). So in addition to the three intervals in major and minor chords, you have to add either a major 7th or minor 7th interval, which lends a bluesy, jazzy vibe to the chord.

Take a look at the table below to find the intervals that make up a 7th chord. For reference, the intervals for a major chord are listed in the first row. 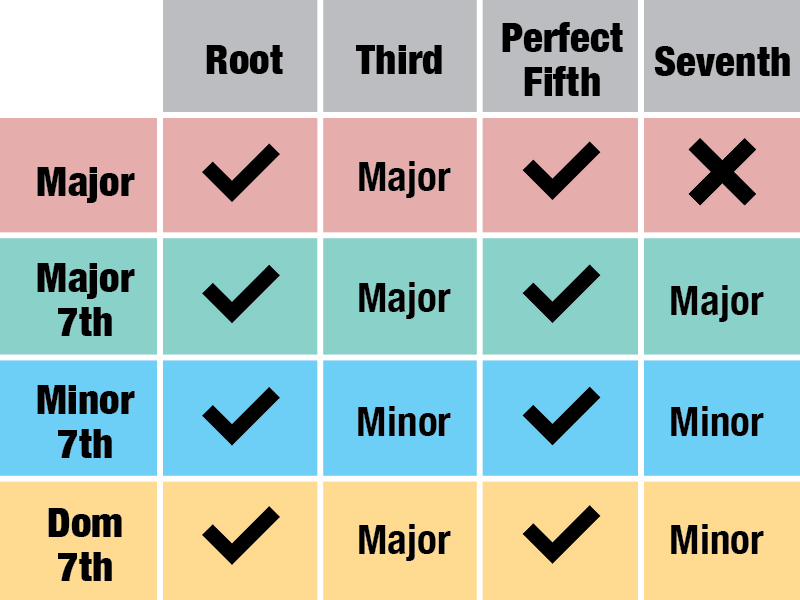 Major 7th chords are straightforward enough. And if you take that chord, flatten the major third and major 7th, you’re left with a minor 7th chord. But if you only flatten the 7th, you have a dominant 7th chord.

Fortunately, there are fast and effective ways to play 7th chords all around the fretboard. We simply take those handy E and A chord shapes, then modify their intervals accordingly to create 7th chord shapes.

The diagram above shows how the three classes of 7th chords can be formed by tweaking the position of an E-shaped major chord.

For example, a major 7th chord can be created by playing the major 7th interval on the D string, which is one fret below the root’s octave. To play a minor 7th chord, you need to flatten the third and seventh intervals: So hit the note one fret below the major 3rd (aka the minor 3rd) on the G string, and two frets below the root’s octave (aka the minor 7th) on the D string.

And to form a dominant chord, all you have to do, starting with a major chord, is hit the minor 7th, with no change to the major 3rd.

The same can be done for the “A”-shaped major chords, too.

It’s simple: For a major 7th, flatten the note on the G string by one semitone. For a minor 7th, flatten the same note by two semitones instead, and then hit the minor 3rd on the B string. For a dominant 7th, you only have to take the root’s octave on the G string, and turn it into a minor 7th by hitting the note two semitones lower. If you’re using your index finger to barre the chord, all you gotta do is lift your ring finger off the fretboard.

You can play 7th chords using open chords, too. Simply modify the chord tones accordingly, based on the chord you wish to form. Try beginning with a D major open chord:

So with this basic shape, here are the intervals and finger positions you have to move around:

And like the E and A barred shapes, the D shape can be moved up and down the fretboard – just remember to move the root note, too. We’ve only shown examples with the D shape, but try it out with the C and G open shapes, too.