The formulas behind major and minor chords, and how to use CAGED to play them. 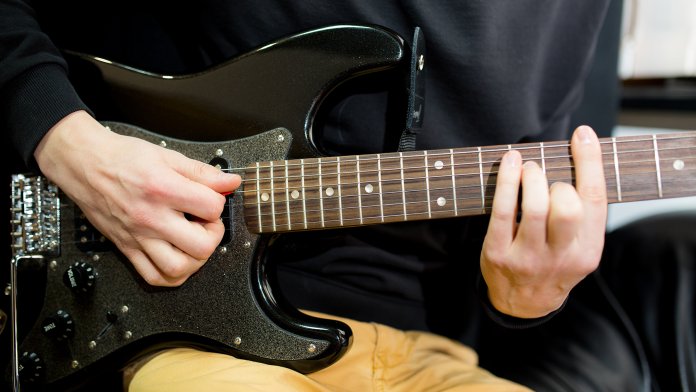 Power chords, which we covered in Part 1, are the easy bit. Minor and major chords are more complex—but only slightly!

Back in the CAGED

Here are the “E” shapes:

And here are the “A” shapes:

If you recall, you’ll be able to move these four shapes up and down the fretboard in order to form other chords. Got it? Great, now on to major chords.

Major chords can be thought of power chords with an additional interval: a major third, which colors the chord in a positive way. In other words, you can create any major chord by first forming its power chord, and then adding a major third. Try it out with the C5 and G5 power chords you’ve just learned. 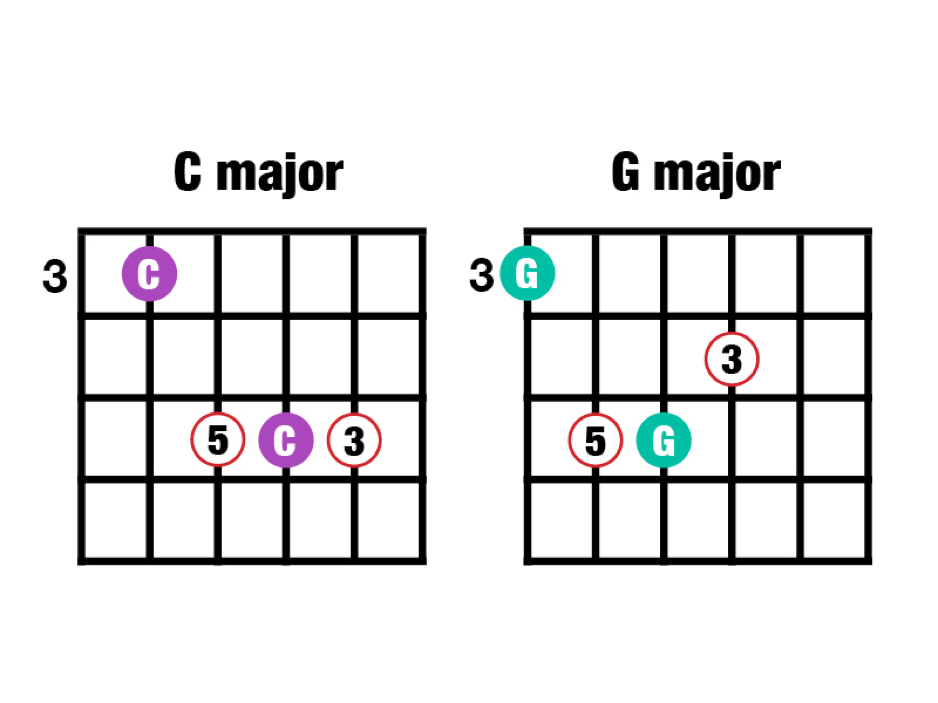 Look familiar? Yep, that’s the “A” shape on the left and “E” shape on the right. It’s important to note that CAGED is a system based upon these chord formulas—not the other way ’round.

However, these are ‘skeletal’ versions of the both major chords. You’ll want to add more roots, thirds and fifths on the other strings to really make the chord sing. Do this, and you’ll end up with six-stringed barre chords.

For chords whose root note falls on the low (thickest) E string, you have to use the “E” shape. The A and B major chords, and their corresponding intervals, are depicted here: 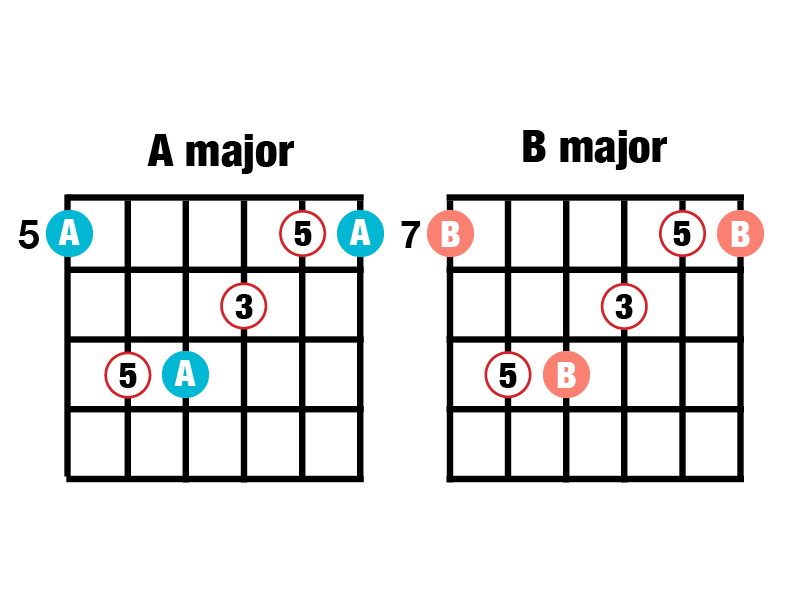 And for chords whose root note falls on the A string, it’s the “A” shape you want: 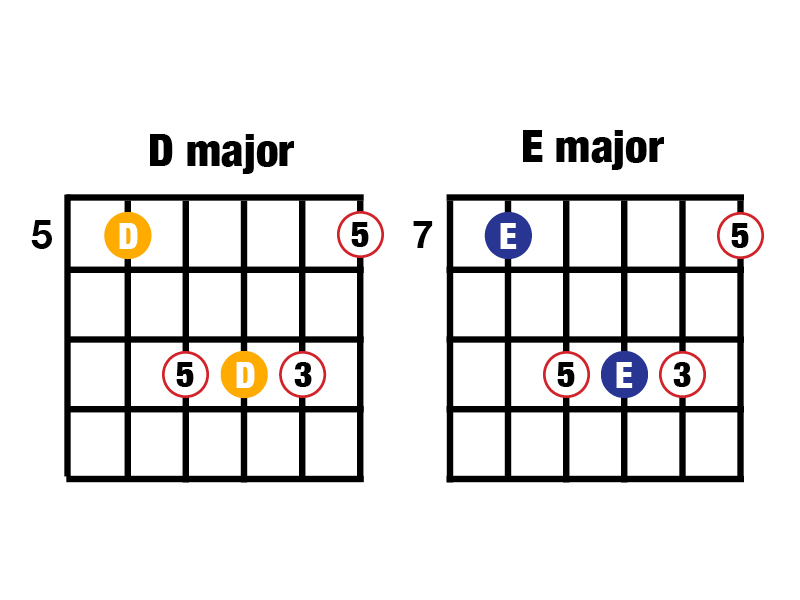 Commit these to memory, because you’ll need them for minor chords.

A minor chord is the modified version of a major chord, with the major third ‘flatted.’ That means you have to play the note one fret below the major third.

The rules for the “E”- and “A”-shaped chords still stand. If the root is on the low E string, use the “E” shape: 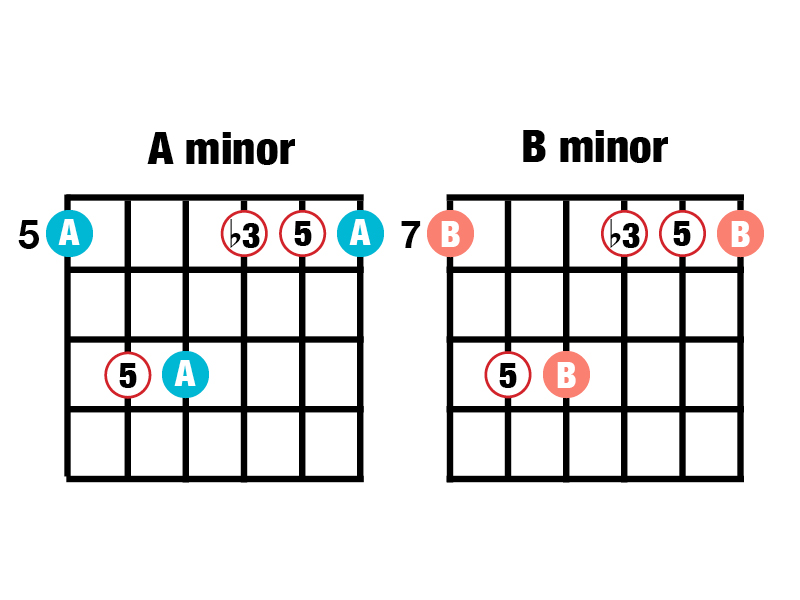 With this shape, you’ll find that to flatten the third, all you need to do is lift your middle finger off the fretboard and let your barring index finger handle the work. 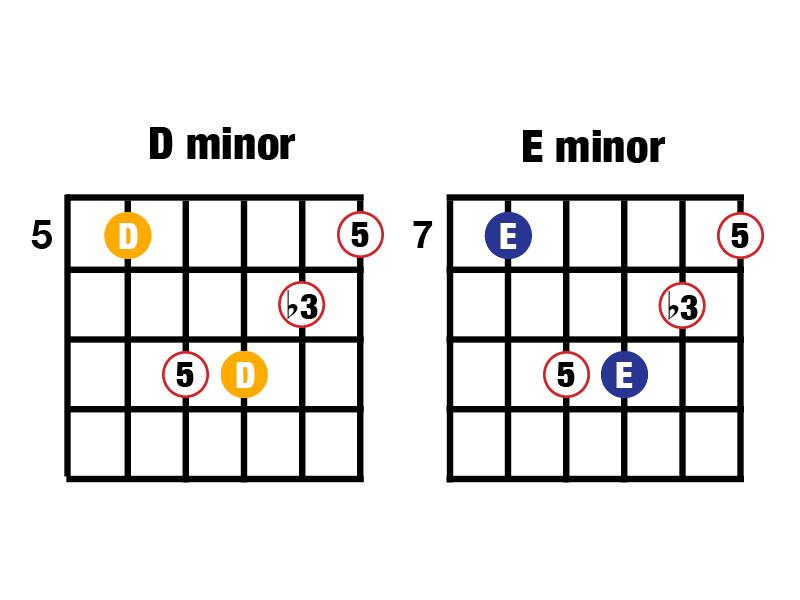 But rather than the mere raising of one finger, you’ll have to adjust the position of your middle, ring and pinkie fingers. (Here’s a trick to help you remember: The “A”-shaped minor chord position is the same as the “E”-shaped major chord position, just one string down.)

With power, major and minor chords under your belt, you’re already well on your way to writing your own tunes. Try these chords out with progressions first. We’ll be back with more chord categories—sevenths, diminished, augmented and so on—soon.