An introduction to chord formulas and how to form power chords, major chords, and minor chords. 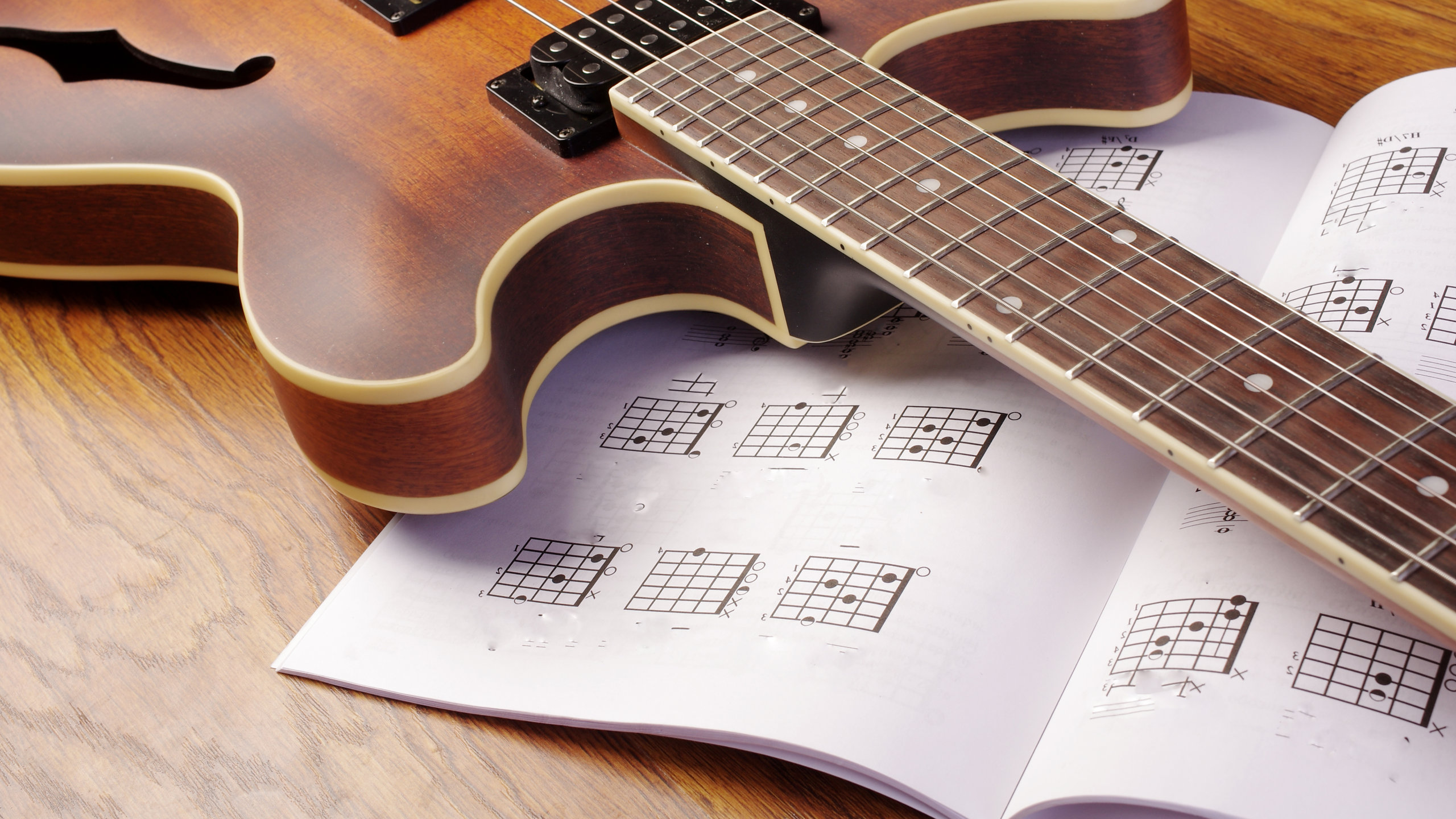 If you were to distill all of guitar playing down to its broad foundational elements, you’d arrive at two things: chords and notes. And chords, which refer to three or more notes played simultaneously, are responsible for driving the flow of a song and providing a tapestry for other instruments to weave their magic.

Which is why a solid understanding of chord theory is essential for the budding guitarist. Fortunately, contrary to what Leonard Cohen (RIP) may think, no secret chords exist—there’s a formula for everything. Hallelujah.

After Part 1 and Part 2 of this lesson, you’ll be able to:

Intervals denote the spaces in-between notes (whole and half steps), but the term is also used to reference a note’s ‘position’ in a scale. Here, we’ll introduce two very important ones: the major third and the perfect fifth.

As their names suggest, the major third and perfect fifth denote the notes in the third and fifth positions of a major scale, respectively. In Figure 1 below, the notes of the C major scale are laid out as they would on a fretboard. In Figure 2, the notes are labeled by their positions in the scale. The C note, being the root, is the first note of the scale, while D, E, and F are the second, third, and fourth notes, respectively.

Which means in the C major scale, the major third note is an E while the perfect fifth is a G:

Besides the root, major third and perfect fifth, there are others that we’ll cover in later lessons. They are: the major second, perfect fourth, major sixth and major seventh.

Intervals in a minor scale are similarly termed. Only the major third, major sixth and major seventh are affected—they’re now a minor third, flat sixth and flat seventh. The major second, perfect fourth and perfect fifth, however, remain unaffected. And this is simply due to the pattern of a minor scale.

So what do intervals have to do with chords? Well, it’s all in the numbers.

A vast majority of all chords comprise a minimum of three notes each, with power chords being the only exception to that rule. They’re not three random notes, of course. Chords are derived from the intervals that make up a major scale, and, depending on the intervals used, can sound optimistic (major chords), melancholic (minor chords), and anything in-between.

Here’s the good news: You can form chords with ‘formulas,’ which tell you the intervals you need to form a specific chord. And to add to that, there are fretboard finger patterns you can memorize to easily find those chords—we’ll be looking at the “E” and “A” shapes for that.

The table below summarizes the constituent intervals for the three classes of chords we’re going through in this lesson: major, minor and power. These categories of chords use only the root, third and fifth of their corresponding scales.

So a C major chord, for instance, requires the root, major third and perfect fifth of a C major scale: a C, E and G, respectively. A C minor chord, on the other hand, swaps out the major third for a minor third, which is just one fret flatter. That gives you: C, E♭ and G. And a C power chord removes the third altogether: C and G.

It works for all other keys, too. Here’s the chart dissecting the G major, minor and power chords:

The only thing left would be to find the best way to strike those notes at the same time on your instrument.

A power chord is the simplest and most common type of chord used in rock, metal, indie and other guitar-led genres. It is neither a major, minor nor diminished chord, and can ‘fit’ into in pretty much any key or chord progression. They’re usually denoted by a “5” suffix: A C power chord is a C5, while a G power chord is a G5.

The “5,” as you’d probably have guessed, refers to the perfect fifth, which is the other constituent interval of a power chord besides its root. You’d recognize those two notes from any medieval movie. Think of a pitched battle, with armies waiting on both sides. A horn bellows out the rallying cry: De-DUUM! That’s what a root note and its perfect fifth sound like when rung in quick succession, and that’s what makes a power chord so, well, powerful.

A C power chord, for instance, is made up of the C and G notes, while a G power chord is made up of a G and D. In the diagram below, several C, G and D notes of the fretboard are highlighted:

If all you gotta do to play a C power chord is strum a C and G note simultaneously, how many ways are there to play the chord in this diagram?

Here’s the most basic way: 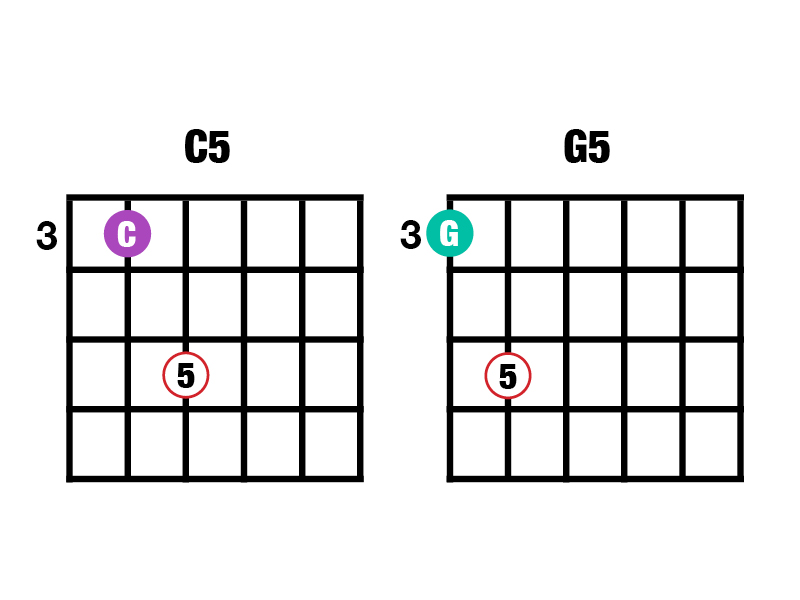 Another common way is to add another root note, albeit in a higher octave: 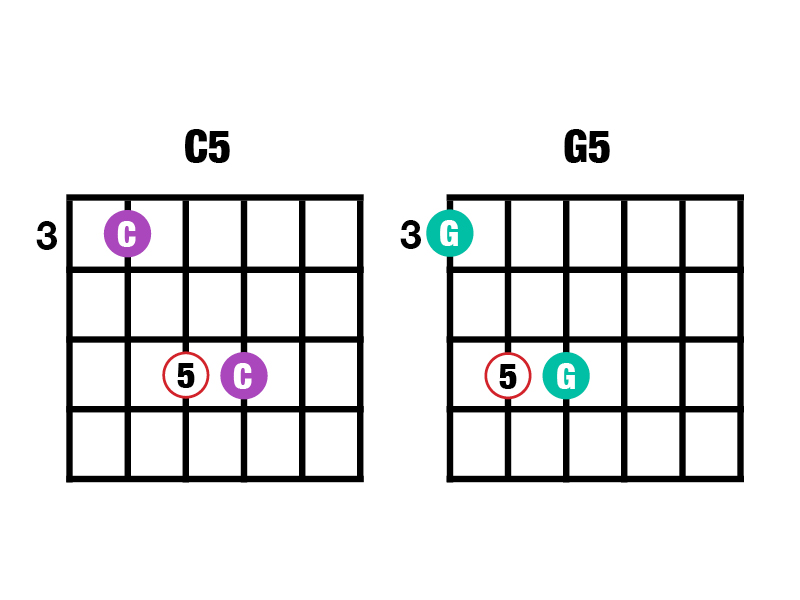 By adding another root note, the power chord grows richer and fuller. And a third way of playing it would be as ‘inverted power chords,’ which, in this case, would mean to remove the root notes on the third frets. The most commonly used example of inverted power chords would be the opening riff of “Smoke on the Water.”

The diagram below displays all the notes of the C major scale, but with the letters of its notes swapped out for numbers. The root, perfect fourth and perfect fifth notes have been highlighted, while the remaining notes have been darkened out.

In this diagram that depicts all the notes of the C major scale, notice the ‘L-shaped’ positions of the “4”s and “5”s, relative to the root:

Now, on to major and minor chords.