An introduction to sharps and flats, keys, and dealing with key changes. 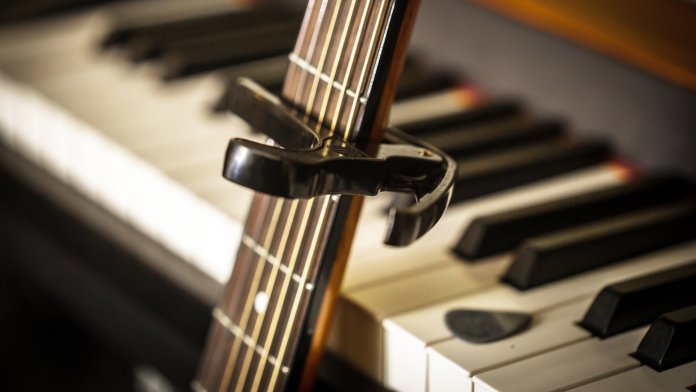 Now that you’ve got the C major and A minor scales under your belt, you’re probably thinking: “Well, that was easy.” And then you venture into, say, a G major scale, but a wild hashtag sign appears. Hold up, what’s that supposed to be?

That’s called a “sharp symbol,” or “♯.” And it’s closely related to “flats,” or “♭.” Both symbols denote a higher and lower pitch, respectively, and you’ll find them all over the fretboard. Learning how sharps and flats function, and how you can use them, is absolutely essential to playing the guitar—so we’ve dedicated this entire lesson to them.

After reading this article, you’ll be able to:

What are sharps and flats?

Here are all the sharps and flats in-between the notes of the C major scale:

In the diagram above, all the notes are laid out just as they would on a fretboard. There are three sharps and two flats in-between the naturals, starting with a C# one fret up from the C. But, couldn’t C♯, which is also one fret lower from the D, also be called a D♭? That’s right—and it’s because of “enharmonic equivalence.”

Simply put, “enharmonic equivalence” means to describe one note in two ways. The diagram below shows two ways to depict all 12 notes of an octave, starting from a C. Only sharps are used in Figure 1, and only flats in Figure 2. And, yes, a F♯ sounds identical to a G♭.

So how do you decide whether to call it a sharp or a flat? That depends on the situation. If the goal is to tell your bandmates the note you’re on, both variations are acceptable, and will get the job done. But when it comes to learning about more complex topics such as key signatures, then the distinction is crucial. For now, however, we’ll keep things simple and consider them interchangeable.

A “key” is the ‘tonal centre’ around which a piece of music revolves. Once you know the key of a song, you’ll be able to identify the ‘right’ notes to play, whether you’re a guitarist, bassist, keyboardist, vocalist… pretty much anyone ’cept the drummer. (By “right,” we simply mean the safest notes to play that’ll keep you on-key. Free jazz odysseys will have to wait until much later.)

Keys are typically written as a major or a minor. And that tells you the safest scale to use. For example, if you’re playing in the key of B♭ major, you’ll be on track if you employ the B♭ major scale. Which, if you remember the previous lesson, can be derived as follows:

Sticking to these seven notes is a reliable and safe option, whether you’re cooking up complementary riffs or soloing on the upper reaches of the fretboard. Stray from them and you’re more likely to hit too many tonal clashes with the song—and that’s why it’s important to quickly derive the constituent notes of a scale.

But what if, say, your vocalist has a problem hitting the higher notes, and wants to change the key of a song from the B♭ major to a B major? That’s where “transposing” comes in.

To transpose a song means to play it in a different key. This can be done by either raising or lowering the pitches of all the notes of the scale by the same amount.

But here’s a trick: You can use the fretboard to help you determine the notes after a key change. The diagram below depicts the notes of the B♭ major scale, arranged in a box shape:

In the raised key of B, all the notes of the B♭ major scale must also ‘rise’ by one semitone, which is equivalent to moving the box shape up by one fret.

Once you’re in this new position, your fingers will already be in the positions of all the other notes of the B major scale. This shortcut lets you derive notes in a major scale almost instantly, so you won’t have to do cartwheels in your mind when the singer calls for a key change.

The trick also works for minor scales. If the song is in a minor key, you can use the minor box shape to determine all the notes in the scale. Here’s the A minor scale in action:

For the fifth time, the singer has changed the key and raised it by a whole step, in this case from an A minor to a B minor. How would you determine the notes of the new key?

Lo and behold, by shifting the box shape a whole step (or two frets) up, you’ve stumbled upon the notes of a B minor scale, which will sound just right for the key of B minor.

So far, we’ve only used keys in relation to scales and single notes. But changing chords and chord progressions follow a similar process—which we’ll get to in another lesson.