We all know the difficulty of lugging around your amp and the cables, footswitches etc that go along with it, but luckily Boss have come up with a solution… 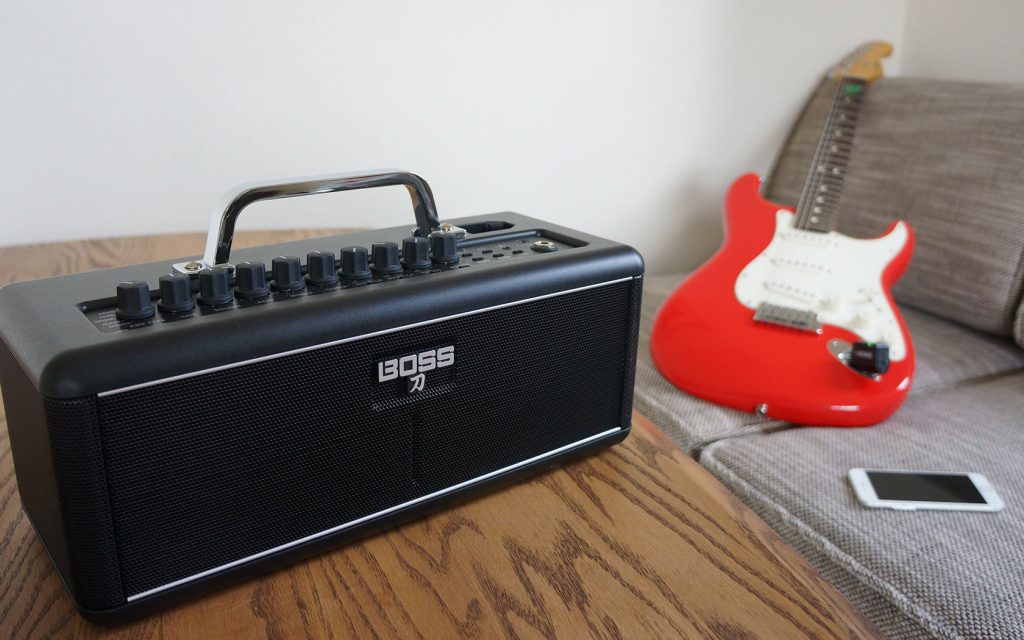 Whether you’re a recording or performing musician (or both) you’ll know the pain of carting around a guitar amp and necessary cables, and there’s no guarantee you’ve remembered everything. However, such annoyances could be a thing of the past with the arrival of Katana Air.

Packed full of pro amp tones and effects from the Katana amplifier series, Boss is confident that you won’t lose out on sound with this portable marvel. Feel like something needs a slight tweak? That’s fine. All sounds can be wirelessly edited and organised via a dedicated app (iOS and Android). You can even use this function to jam along to songs from your smartphone.

With up to 12 hours playing time on a single charge, the battery in Katana Air promises not to let you down. Furthermore, it enters standby mode to conserve change when it becomes inactive. Pick up and play is as easy as it sounds, thanks to the motion-sensing tech that instantly wakes up the amp from standby mode.

One of the standout features is the stereo headphones/recording output, which lets you to record the pro amp sounds and effects directly into your DAW as well as allowing for silent practice with full stereo sound when practicing silently.

*Totally wireless guitar amplifier with newly developed BOSS technology delivers rock-solid sound with ultra-low latency
*Custom wireless transmitter plugs into any electric guitar and charges while docked in the amp
(Transmitter provides 12 hours of playing time on a single charge, and automatically enters standby mode to conserve the charge when no activity is detected
*Always ready to play, with motion sensing technology in the transmitter that instantly wakes the amp from power-saving standby mode
*Premium tones derived from the Katana stage amplifier series, with five unique amp characters and access to over 50 world-class BOSS effects
*Six onboard memories for storing favourite amp and effects setups
*Powerful stereo speaker system with full-range sound and up to 30 watts of power
*Edit and organise tones wirelessly with the BOSS Tone Studio app for iOS and Android mobile devices
*Play along with music streamed wirelessly from a mobile device via Bluetooth®
*Amplifier powered by eight AA-size batteries or included AC adapter
*Aux in for connecting wired devices, plus headphones/recording out for silent practice and music production

Pricing and Availability:
Katana Air retails at £429 and will be showcased at NAMM 2018.