Chase Bliss Audio to release the Warped Vinyl mkII, Wombtone mkII, and Gravitas effects pedals, offering the relocation of dip switches, in depth parameters controlled via MIDI, in addition to the two user-defined pre-sets contained within the pedal itself. 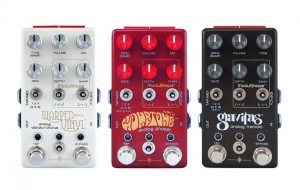 Gravitas features an all-analog signal path and offers harmonic and standard modes, which can be combined for an even richer modulation effect. The simultaneous deployment of these cascading modes facilitates vibrant and complex rhythms, unavailable in other devices. Discrete class A circuitry offers a transparent, full-bodied boost alongside a wide-ranging tone control.

What is new in the mkII incarnations of the celebrated Warped Viny and Wombtone devices? The 16 dip switches have been relocated from the undercarriage to the side of the enclosure for easier access and increased visibility. Every parameter on each Chase Bliss pedal can now be controlled via MIDI. All pedals will feature 122 analog presets, all recallable by MIDI, “I think we have made some significant improvements,” says designer Joel Korte. “A big thing with these new versions is that they have a sort of ‘bonus’ knob—drive in the case of Gravitas, tone in the case of Warped Vinyl, and feed in the case of Wombtone.”

The Warped Vinyl mkII added tone knob will provide greater definition and nuance to everything from hi-fi chorus to shimmery pitch modulation. This invigorated circuit also promises a reduction in noise and a wider vibrato range.

Chase Bliss Audio is also relaunching its coveted phase machine in the form of the Wombtone mkII. Users may access a new 2-stage mode, in addition to a slower overall phase rate. The mkII also benefits from a re-envisioned feedback circuit, and a master wet/dry mix allows for the complete utilization of full phase vibrato at 100% wet or completely unaffected at 100% dry.

The Warped Vinyl mkII and Wombtone mkII will retail for $349, with a launch date of April 23rd. Gravitas will be available for $299 U.S. in the second quarter of 2015.