Resound is the reverb pedal for the serious player. 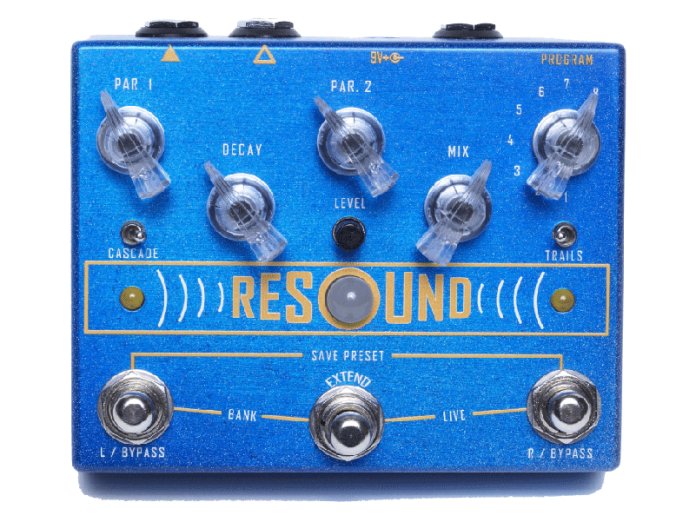 Cusack Music has just launched a digital reverb pedal, and it’s a treat if tinkering is your thing. Where Cusack Music’s Reverb pedal is a no-frills stompbox that serves beginners well, the new Resound takes things further with multiple controls to fine-tune the effect.

This stompbox comes loaded with eight reverb algorithms: room, plate, spring, shimmer, cathedral, modulated, ‘freeze’ and ‘glisten.’ The latter is perhaps the most unique mode on the Resound. It simulates a 12-string guitar by adding an octave up, a fifth down and a touch of tremolo to your notes. You can also save up to four banks of two presets each.

“Decay,” “Mix” and “Level” are your usual knobs—the Resound is capable of 100% wet signal—while two other dials adjust mode-specific parameters.

And to create swirling ambient textures, hit the “Extend” footswitch. That maxes out the reverb’s decay and, if you flick the “Cascade” toggle, lets you add new notes to the extended reverb, too. The effect, however, varies according to the program you’ve set.

Flanking the “Extend” footswitch are two bypass switches. They allow you to quickly switch between both presets in the same bank—without losing reverb trails.

The Resound also has stereo outputs, but you can sacrifice one output to hook up an expression pedal whose function is determined by internal jumpers.

The Cusack Music Resound lists for $279. More information at cusackmusic.com.