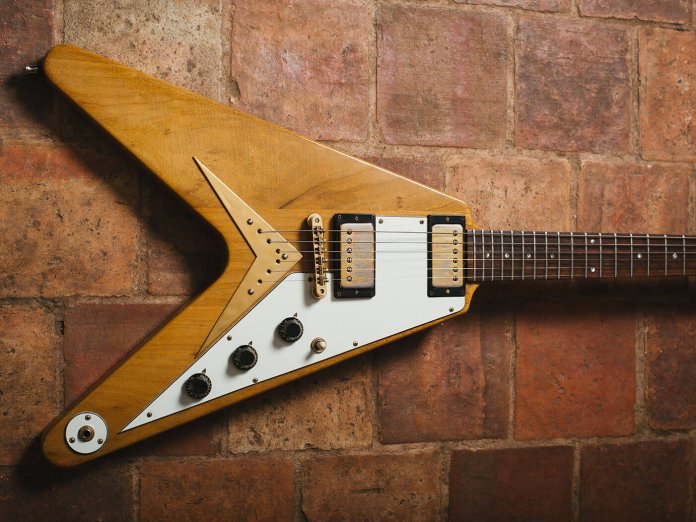 Last month, Gibson Brands filed a lawsuit in Texas against the parent company of Dean Guitars alleging trademark infringement and counterfeiting. Now Armadillo Enterprises has formally responded to the suit, seeking to dismiss the case and filing a counterclaim that not only seeks to invalidate the US trademarks on Gibson’s Flying V, Explorer and ES-335 body shapes, but also accuses Gibson of interfering with its dealer relationships, and even threatening guitar stores that stock Dean and Luna guitars with legal action.

Gibson officially commented on the Armadillo lawsuit last week, claiming that the brand had, “made several attempts to communicate with them directly to avoid a prolonged legal battle”, in the hope of finding a “constructive resolution that could be beneficial to both sides”.

However, in the countersuit filed in US District Court for the Eastern District Of Texas on 8 July, Armadillo alleges “tortious interference with Armadillo’s business relationships and/or contracts” on the part of Gibson in the months leading up to the suit’s filing on 6 June 2019.

“Prior to filing and/or service of Gibson’s Complaint, Gibson contacted guitar dealers (including Armadillo’s dealers), threatening legal action and demanding that dealers remove all Armadillo guitars with the V, Z, and/or semi-hollow guitar shapes,” the suit reads.

The suit cites the example of Carlino Guitars – a guitar shop in Medford, Massachusetts – which it claims was sent cease and desist letters by Gibson in April and May 2019. The letters allegedly demanded the removal of all Dean V and Z guitars from the shop’s website, accused them of being party to trademark infringement by stocking Dean instruments, and threatened the store with legal action if they didn’t comply.

The suit claims that based on “information and belief” that Gibson sent similar letters to other dealers and retailers, “with the intent of disruption Armadillo’s sales and contractual relationships”.

The counterclaim also submits as supporting evidence a letter Armadillo claims was sent to Gibson’s dealer network on 3 June 2019, informing them of the forthcoming Armadillo suit, which the letter states is being pursued in light of Dean and Luna’s “blatant copying” and “counterfeiting” of Gibson designs.

This is backed up with a call to action for dealers to help the company “take back control of Gibson’s famous body shape designs” encouraging them to report any instruments they come across “that you believe uses Gibson’s trademarks without authorisation” either through their Gibson rep or via an online form on the Gibson website.

The counterclaim notes that many Armadillo dealers are also Gibson dealers and claims that these “threatening communications” led to numerous calls from dealers who were, “concerned and afraid to continue to deal with Armadillo”, and as such damaged its sales and business relationships.

The most potentially impactful aspect of the filings relates to the issue of the trademarks of the Flying V, Explorer and ES-335 body shapes. These marks were a key part of Gibson’s original counterfeiting claim, and as part of its defence, Armadillo is not only trying to prove that the claims are without merit, but crucially it also seeks to get the trademarks cancelled altogether.

“The above designs have been prominently used and promoted for years and, in some instances, decades,” the suit reads. “All the while, Gibson sat on its purported rights and failed to object.” The suit goes on to claim that Dean has invested millions of dollars promoting and marketing guitars with those shapes in that period, and as such, “some of Gibson’s accused trademarks are invalid because they are generic and/or incapable of serving as a source identifier for guitars”.

Back in 2009, Fender lost a similar case, which ruled that after 60 years of universal use, the Stratocaster, Telecaster and P-Bass body shapes were so commonplace they’d become generic (and as such could not be trademarked), while Gibson is already dealing with a suit relating to the ES-335 shape trademark that dates back to 2014. Gibson, in the early 2000s, had also famously lost a case to PRS regarding singlecut body designs.

In calling for the counterfeiting claim to be dismissed, Armadillo claims that its long history of making these guitars renders the notion that they could be counterfeits invalid – “Armadillo’s product shapes are commonplace and are all branded with its distinct, well-known Dean and/or Luna house marks and distinct-looking headstocks,” the motion reads. “To suggest that famous musicians like Michael Schenker, Eric Peterson, Christian Martucci, and John Connolly have openly promoted, played, and endorsed spurious, ‘counterfeit’ products on stages across the world is absurd.”

The counterclaim demands the cancellation of Gibson’s Flying V, Explorer and ES-335 body shape trademarks, and seeks the “maximum damages permitted by law” for the alleged interference caused by the company’s communication with Dean and Gibson dealers.

Guitar.com has contacted Gibson for comment on Armadillo’s counterclaims, and will update this story as it develops.