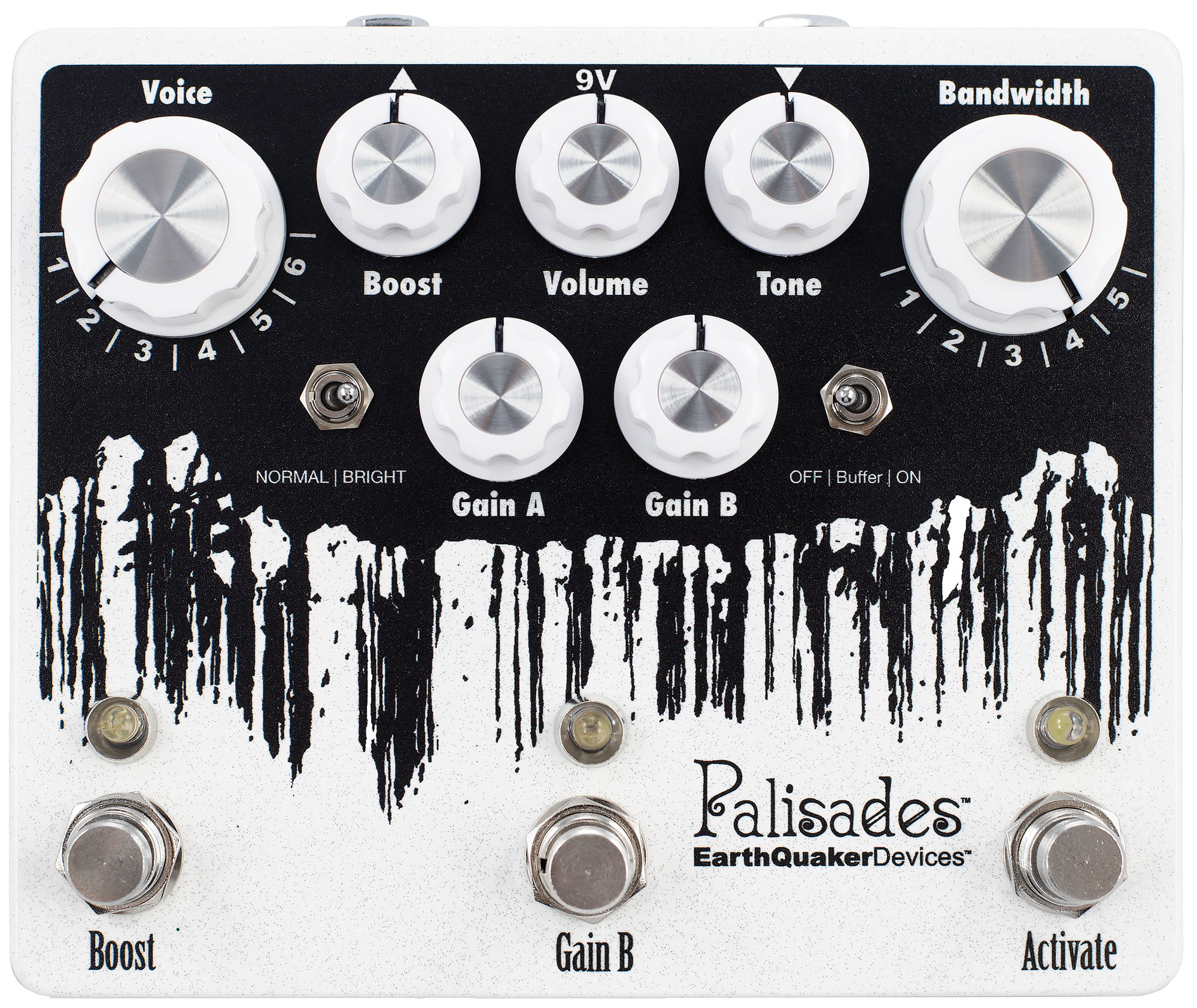 In addition, the Arpanoid V2, Grand Orbiter V3 and Palisades V2 feature EarthQuaker Devices’ all new Flexi-switch, which gives players the ability to use the pedals in either standard latch mode or the new momentary mode. This allows cool and creative effect bursts to shoot out of these amazing pedals, allowing the most expressive musicians to further enhance their creative flow.

In essence, these upgrades are sure to cement and prolong the popularity of these already legendary pedals. 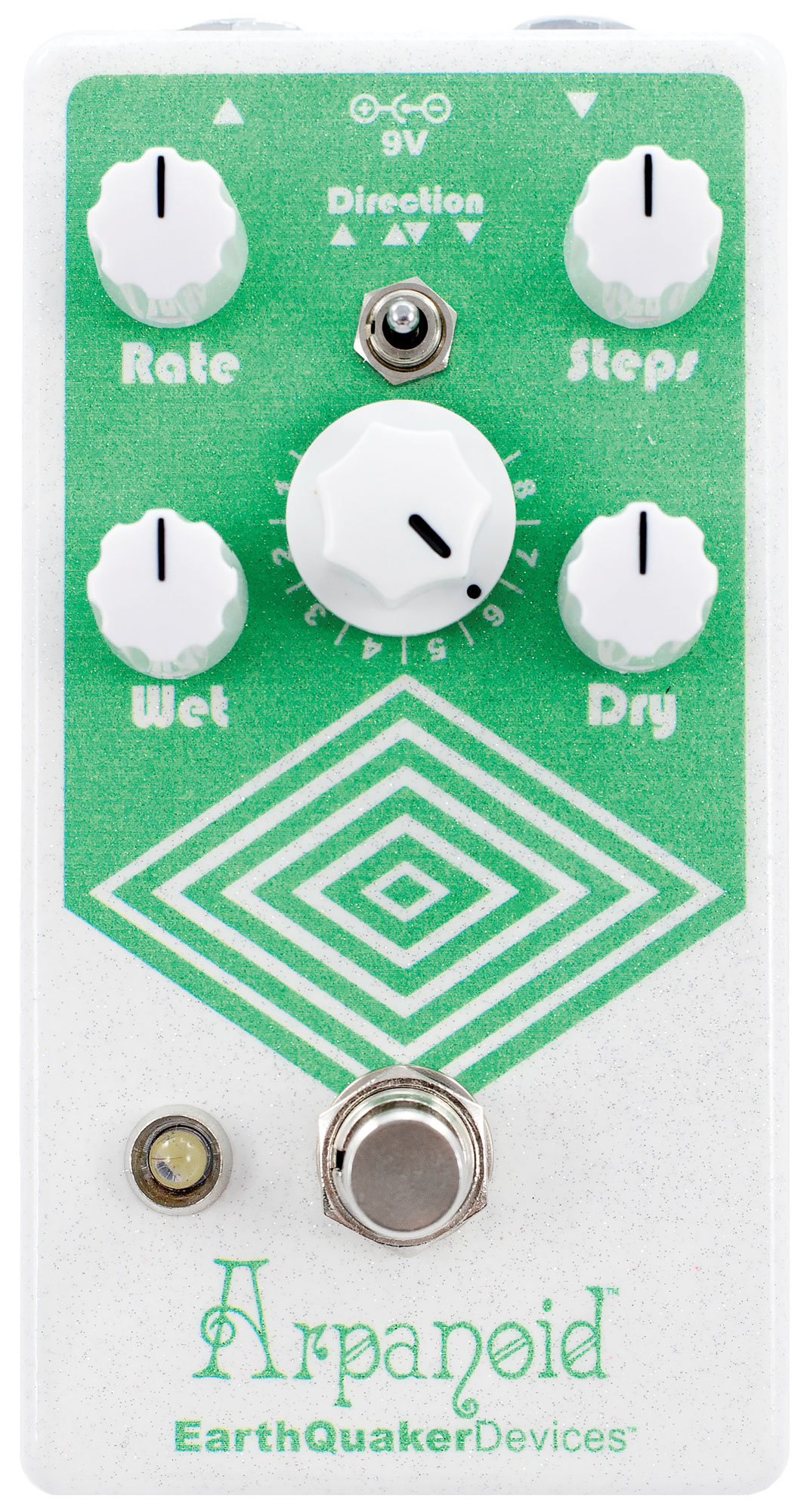 The Arpanoid V2 is the first dedicated compact polyphonic pitch arpeggiator effects pedal for the electric guitar! It takes whatever notes you play and calculates an adjustable ascending or descending scale based on the root note. It also works on complex chords as well as single notes in any key. Its eight modes feature major and minor patterns so your next jazz odyssey will remain on time and in tune.

The patterns go from one octave below the input to one octave above, so there’s plenty of harmonic range, and the Arpanoid’s “random” patterns are sure to be a hit at your next psychedelic freakout.

The Arpanoid has a variable “Step” control to choose the number of notes in the sequence, which determines the rhythm and meter of the pattern, along with the overall feel of the effect. Experimenting with this control will open your third eye to odd time signatures, polyrhythms, and a unique quantized hard-sync vibrato effect!

Furthermore, the independent “Wet” and “Dry” controls allow you to blend the all-analog input signal with the all-digital affected signal, making the Arpanoid useful for anything from subtle ambient tone clusters to a bombastic polyphonic flourish, and the ability to use the Arpanoid fully wet makes it great for use in the studio! Patch it on inserts! Try it on vocals! Synths! Drum machines! Use it on sends! Go nuts, (lady)dude.

We suggest treating the Arpanoid like a new instrument and taking some time to get to know and love it. Once you understand how the Arpanoid will work for you, you and your device will live a long, ful lling, happy life of mutual musical enjoyment. The Arpanoid is true-bypass, and built one-at-a-time by a bunch of glowing orbs in the parallel universe of Akron, Ohio, USA. 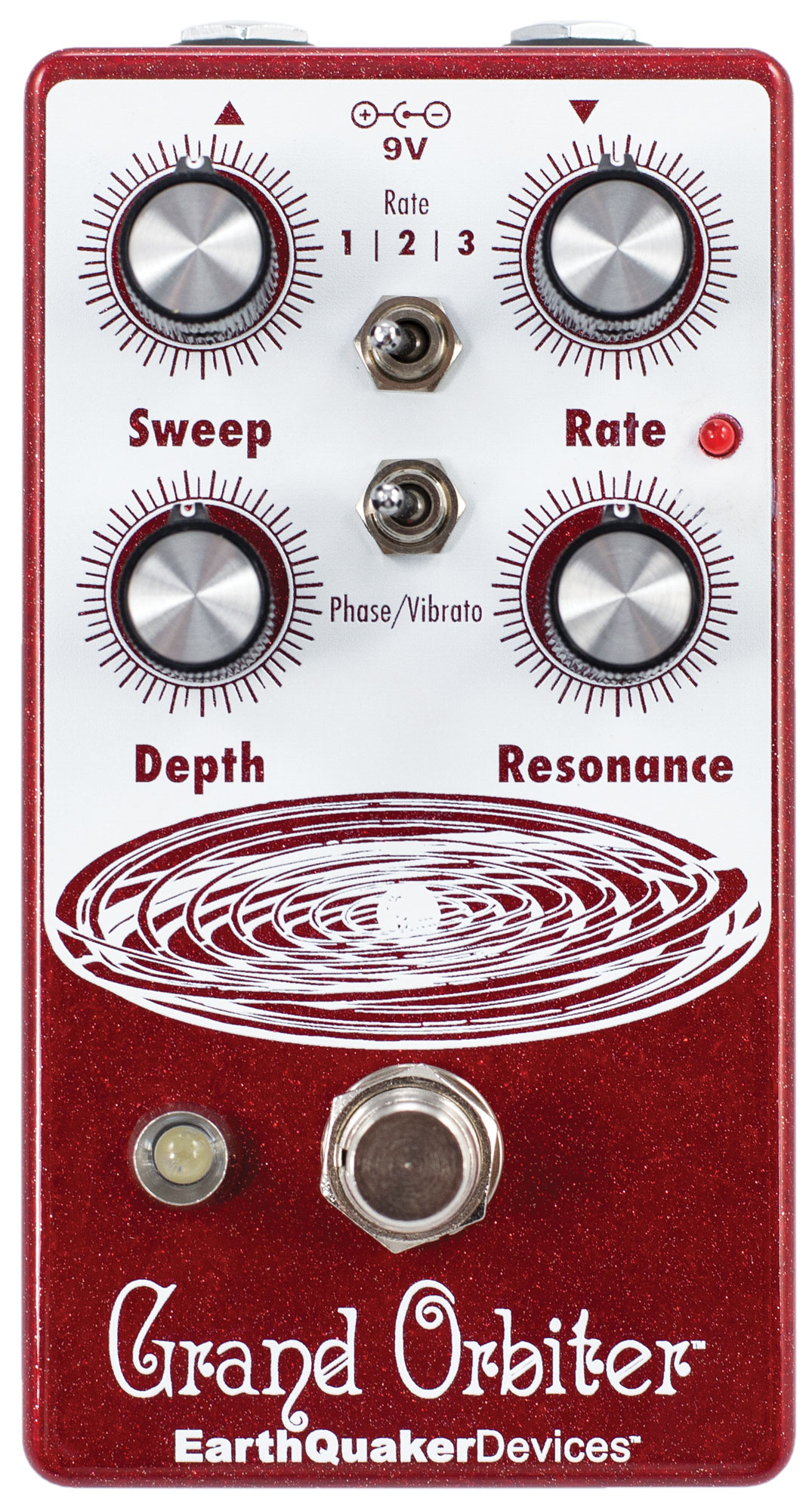 The Grand Orbiter V3 is a 4 stage OTA-based phaser with a diverse feature set that can go from stationary and resonant to slow and mellow and on through fast and swirly. It has a three-way toggle switch to select between the ranges of modulation: Rate 1 is slow sweep mode, Rate 2 kills the LFO and allows you to use the Grand Orbiter as a fixed resonant filter and Rate 3 is fast sweep mode.

So no matter what starlit galaxies you wanna go to, Grand Orbiter is definitely the right vessel for your intergalactic travels!

The master Rate control fine tunes the speed of the LFO in each of these modes and the flashing red LED acts as a visual indicator, even when the effect is in bypass mode.
The Depth control blends the shifted signal in with the dry signal and controls the intensity of the effect.

The Sweep control governs the peak frequency of the phased signal’s tone, turned full clockwise the sweep is lively and intense, whereas turning counter clockwise yields a darker, more laid back peak.

The Resonance provides a wide range of control over regeneration and at higher settings adds a more pronounced and resonant tone.

You can also use the Grand Orbiter as a true pitch vibrato with the “Phase/Vibrato” switch. When in “Vibrato” mode, the dry signal is removed and the Depth controls acts as a volume control.

This pedal is 100% analog, true bypass and built by entirely by hand in beachy Akron, Ohio.

The Palisades V2 is something EarthQuaker Devices said they would never do… an overdrive based on the legendary TS808! Gasp! The horror! Another tubescreamer?? Really?? Yes, but as with everything EQD, things are always pushed to the next sonic level. You’re not just getting a Tubescreamer. You’re getting ALL the Tubescreamers and then some in this behemoth of an overdrive that’ll give you everything from a comforting classic crunch to frantic re-breathing walls of fuzz.

With 6 different clipping voices, 5 bandwidth settings and 2 gain channels you will be hard-pressed to not nd a setting that will wipe every mid- boosting overdrive off your board. The clipping voices determine how transparent and open or tight and crunchy the distortion is.
They will vary drastically depending on where the gain is set, what channel is active and how much bandwidth is being used. The bandwidth sets the frequency response of the distortion and goes from thin, light and clean through fat heavy and crunchy. It may very well be the single most important control the Palisades has and what really sets it apart.

Gain A is a lower gain channel with a wider range of grit that is great for strumming open chords. Gain B is a higher gain channel with a tighter range that is great for palm muting and/or shredding solos. The Palisades also has a foot switchable volume boost with adjustable level to take it over the top when you want to throw your foot up on the monitor and rip your sweet leads…or maybe just push the front end of your amp a little harder.

The Palisades is a versatile dude that will give you years of loving companionship. Each Palisades is hand made one at a time in the tiny tree house community of Akron, Ohio. 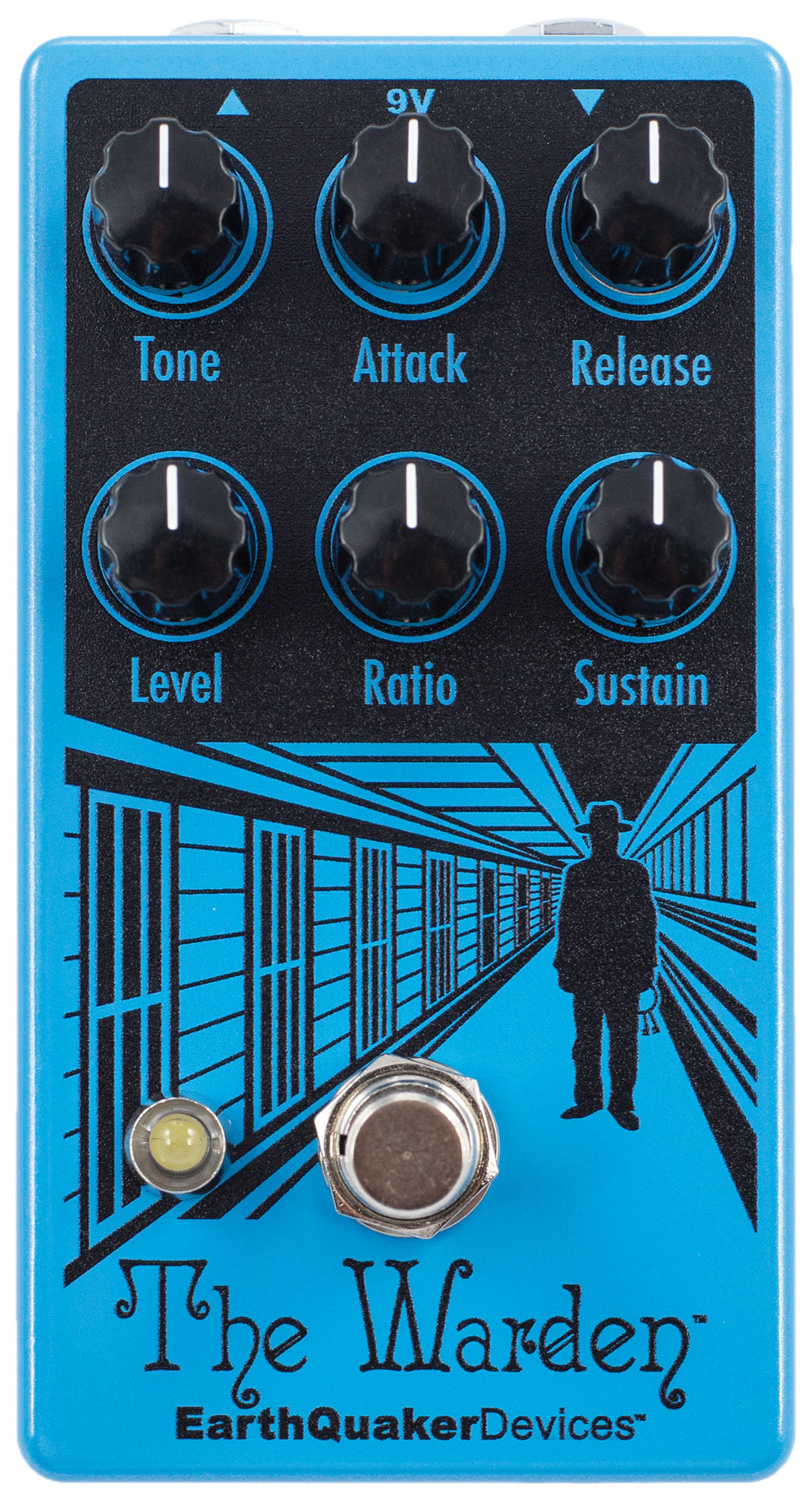 The Warden V2 is an optical compressor with a feature set usually reserved for studio grade units. Built with high grade components and internally powered by 18v, The Warden has loads of gain and sustain on tap. Optical compression has a reputation for having more character than a VCA or FET based compression and The Warden is no exception.

So whether you’re going for a subtle level-evening, always-on tone enhancement or that obvious chicken-pickin’ pop and squeeze, The Warden is sure to deliver the sonic stranglehold you need.

With complete control over attack, release, sustain and ratio, The Warden will allow everything from a heavy squash with fast attack and release to “barely there” subtle compression.

Level controls the overall output and is affected by the sustain and ratio settings. There is no specific unity setting, adjust to taste when you find your perfect compression setting.
Sustain is the heart of The Warden. It controls how hot the signal is, which changes the dynamics of the compression. The Warden is a feedback style compressor, the hotter the signal, the more active the compression. Very little sustain results in very little compression, less active attack and release and a cooler signal. Max sustain results in heavy compression, longer sustain, hotter signal and more lively attack and release.

Ratio determines how much the gain reduction affects the signal. All the way up is full compression and the compression is reduced as you turn this counter clockwise which allows more of the boosted, less compressed, signal to come through. There are no de ned ratios here.

Attack controls how quickly the compressor reacts and starts levelling the signal. All the way counter-clockwise is a fast, nearly immediate reaction. Turning the attack clockwise slows the reaction time.

Release controls how long it takes the signal to raise back up to the level determined by the sustain & ratio settings. All the way counter clockwise is a fast release and the release time slows as you turn it clockwise.

The Warden is true bypass and handmade with sweet loving care in Akron, Ohio.