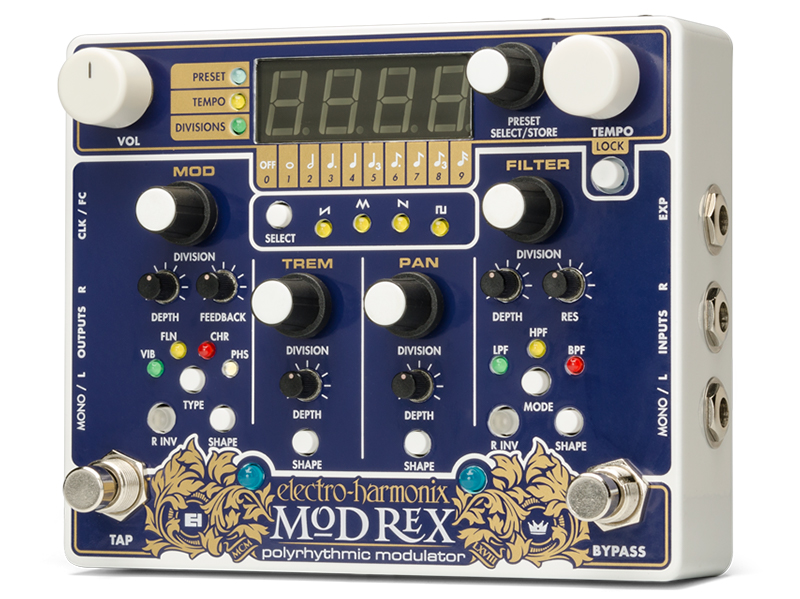 The Mod Rex Polyrhythmic Modulator, as its name suggests, aspires to the modulation throne. Electro-Harmonix’s new pedal is all about versatility and power, packing a medley of modulation modes, along with the ability to sculpt and shape that modulated signal.

The Mod Rex is set up with four stages: modulation, tremolo, pan and filter. The “Mod” section features four modes—chorus, vibrato, flanger and phaser—whose depth and resonance can be dialed in. The “Trem” section delivers a no-frills tremolo with a “Depth” knob moderating intensity, while the “Pan” section brings stereo magic to your signal. In mono, it doubles up as a tremolo but with inverted wave shapes.

Finally, the “Filter” section offers the versatility of a low-, high- and band-pass filter:

All four sections can be engaged simultaneously. Each one features a few LFO waveforms options—rising sawtooth, triangle, falling sawtooth and square wave—and nine tempo divisions. This gives you added control over each of the pedal’s sections, and the ability to tinker with the modulation transitions between each stage.

Elsewhere, the Mod Rex boasts MIDI control to make operation even simpler, and up to 100 presets (with 20 pre-installed) for quick recall.

EHX has detailed the pedal’s functions in a simple video here:

Retails for $249. More information at ehx.com.