Black Dog, Little Wing and Pictures Of Home were on the setlist. 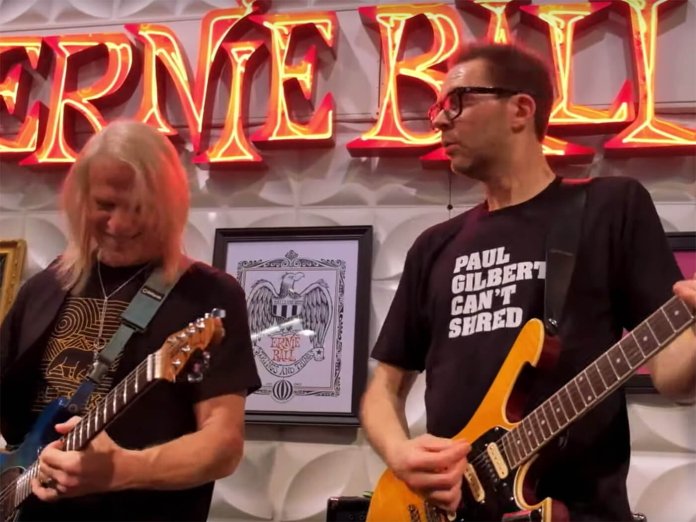 NAMM 2020: Brands big and small enlisted pro guitarists and YouTubers to lure people to their NAMM booths, but Ernie Ball landed perhaps the biggest coup of the lot: Paul Gilbert and Steve Morse covering a medley of rock classics.

The guitar heroes performed on two days of the trade show, drawing a crowd far larger than Ernie Ball’s booth could accommodate. We were lucky enough to snag front-row seats to their three-song set, during which they took on Led Zeppelin‘s Black Dog, Jimi Hendrix‘s Little Wing, and Deep Purple‘s Pictures Of Home. Check them out below:

Gilbert wasn’t only showing off his chops but his new JHS signature distortion pedal, the PG-14, too. It’s an FET-powered pedal that emulates the responsiveness of tube amps – the guitarist claims the stompbox has the power to open up a variety of tones that other drives can’t.

“It’s very tube-y, in that it reminds me of a tube amp even though there are no tubes in it, but it has a lot of nice tube-y characteristics to it,” he told Guitar.com in a recent interview. “It’s pretty radical, too. To me, something like a Tube Screamer creates a more relatively subtle change. The new JHS one is really powerful. Depending on how you set it, it’ll even be really different from itself. It really goes a long way in a lot of different directions, but still a very powerful pedal.”

Guitar.com Live: Everything you need to know about Plini

Fender announces a signature Strat for HER