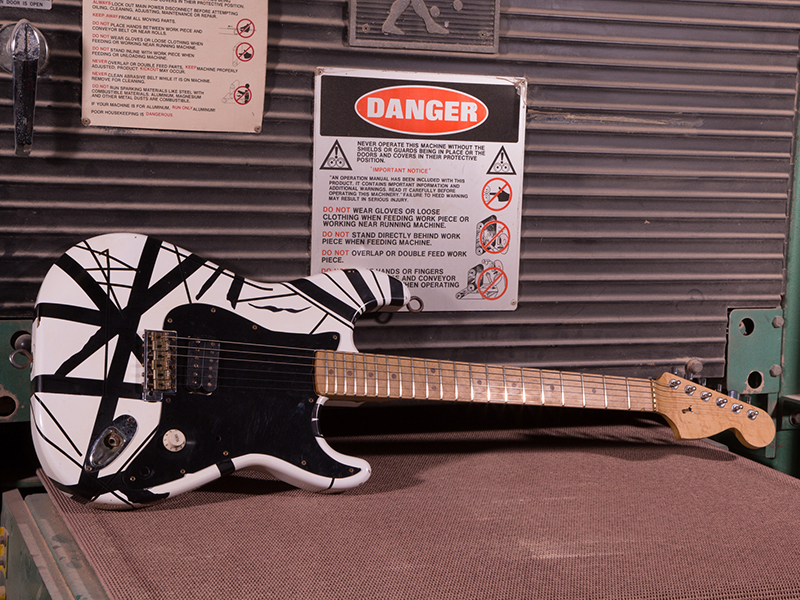 “Eruption,” like “Stairway to Heaven,” is one of those songs you’ll hear upon walking into any guitar shop—even today, four decades after the track’s release on Van Halen. And to celebrate the immortal album’s 40th anniversary, EVH has unveiled three limited-edition guitars that replicate the black-and-white Strats Eddie Van Halen used on the record.

The Super ’78 Model, ’78 Eruption Relic and ’78 Eruption bear many similarities, such as a single EVH Frankenstein humbucker at the bridge, but differ tremendously in the swag that accompanies each axe. Here are the details:

The granddaddy of the bunch, the Super ’78 is accurate down to the scratch of its relic-ed lacquer finish, and is limited to only eight pieces worldwide.

It has an ash body, a two-piece birdseye maple neck, and a 12-inch-radius AA birdseye maple fretboard with katalox dot inlays and 21 mowed-down jumbo frets. Schaller tuning keys and a Fender Stratocaster bridge with Kluson brass blocks are its other highlights.

But what really sets this model apart is its case candy. Eddie himself played “Eruption” on each of the eight guitars, the videos of which are included in the custom-made, tour-worn G&G case that accompanies the Super ’78. Needless to say, he also autographed the back of the headstock of each guitar.

Besides that, you’ll find in the case an autographed Van Halen vinyl, an autographed Looney Tunes Merrie Melodies OG press vinyl, a ’78 chain strap, and other vintage-correct accessories.

This is identical to the Super ’78 in terms of specs, finish and appointments, but there are 30 pieces available worldwide.

And that’s because you don’t get the video of Eddie shredding on your guitar. You do, however, receive the signed swag—minus the Looney Tunes Merrie Melodies record—and a relic-ed G&G case.

If the former two guitars are reproductions of Eddie’s guitar after he’s done with a tour, the ’78 Eruption is what the instrument looks like before he hit the road. Which means to say it has a pristine, un-relic-ed finish on what is essentially the same axe.

Similarly, the custom-made G&G case that holds this six-string hasn’t been put through its paces. In it, you’ll find the exact same merchandise and memorabilia that ships with the ’78 Eruption Relic.

For more info, check out evhgear.com.