NAMM 2020: Is this Fender Custom Shop Coronation Strat the most blinged-out guitar? 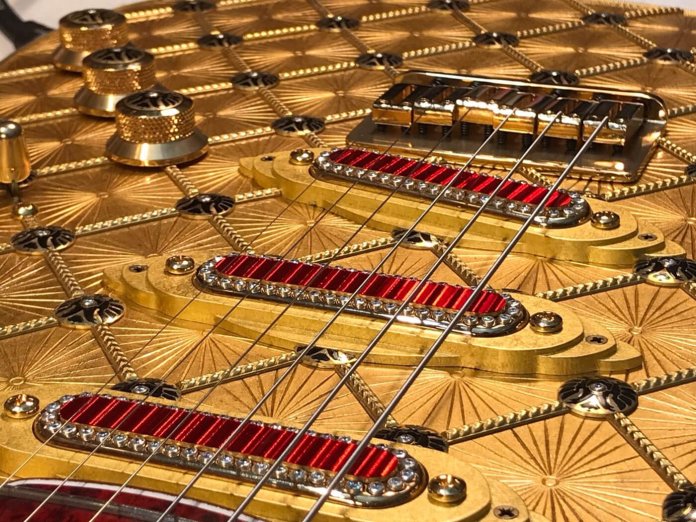 NAMM 2020: Fender Custom Shop has unveiled its offerings for the year ahead, with a reissue of the Broadcaster and a diamond-studded Coronation Stratocaster leading the line. More details below.

To celebrate the 70th anniversary of the groundbreaking electric guitar, the Fender Custom Shop has revealed four limited-run Broadcaster models – including teambuilt and masterbuilt versions – at NAMM 2020. Check it out here:

Part of the Custom Shop’s 2020 Prestige Collection, this blinged-out Strat was designed by master builder Yuriy Shishkov. It’s inspired by the Coronation Egg, which was created in 1897 to commemorate the ascension of Tsar Nicholas II to the Russian throne.

The design of this jaw-dropping guitar includes a gold-leafed surface with gilded silver artwork, custom-fabricated diamond eagle medallions, and hundreds of diamonds studding the entire instrument. Its fretboard even has ‘trellises’ with diamond patterns, leading Shishkov to crown this six-string his “most complicated and intriguing project” to date.

The Coronation Stratocaster lists for a whopping $560,000.

Built by Carlos Lopez, this Strat is a 1:1 replica of Johnson’s iconic Strat, wielded most famously in Cliffs Of Dover. It features several Johnson-approved mods, such as a single Graph Tech String Saver saddle and pot values. The Custom Shop Virginia wears a lightly checked Deluxe Closet Classic finish and an AAAA flame maple neck, and is powered by custom hand-wound neck and middle pickups that are matched to a DiMarzio HS2 humbucker at the bridge.

The Custom Shop Eric Johnson Virginia Stratocaster is limited to 50 pieces worldwide, and lists for £8,099.

Billed as a “faithful re-creation of the guitar Jimmy Page played in the early days of Led Zeppelin”, this Telecaster is best known for the circular ‘mirrors’ that are attached to its white blonde body.

This version of the Tele has a two-piece ash body, a tinted maple neck with a custom Jimmy Page 1959 profile, two hand-wound 1958 Tele pickups and a 7.25-inch fretboard radius.

Here’s another accurate re-creation of an iconic guitar: the Quiet Beatle’s Rocky Strat. To build it, Fender Custom Shop master builder Paul Waller inspected every inch of the original, so its body, neck, pickups and circuitry are true to the actual guitar. Even Harrison’s DIY paint job and “Grimwoods” decal – it’s the name of the shop from which it was purchased – are there.

The Rocky Strat was bought for Harrison by the Beatles’ roadie, Mal Evans, in early 1965. It first appeared on Help! – plus, it’s the first Stratocaster to feature in the band’s music – in its original Sonic Blue finish. Later on, it also starred in the Sgt Pepper sessions, the iconic 1967 telecast of All You Need Is Love and the I Am The Walrus segment of the Magical Mystery Tour film.

Click here to see all the photos from the Fender Custom Shop booth at NAMM 2020.