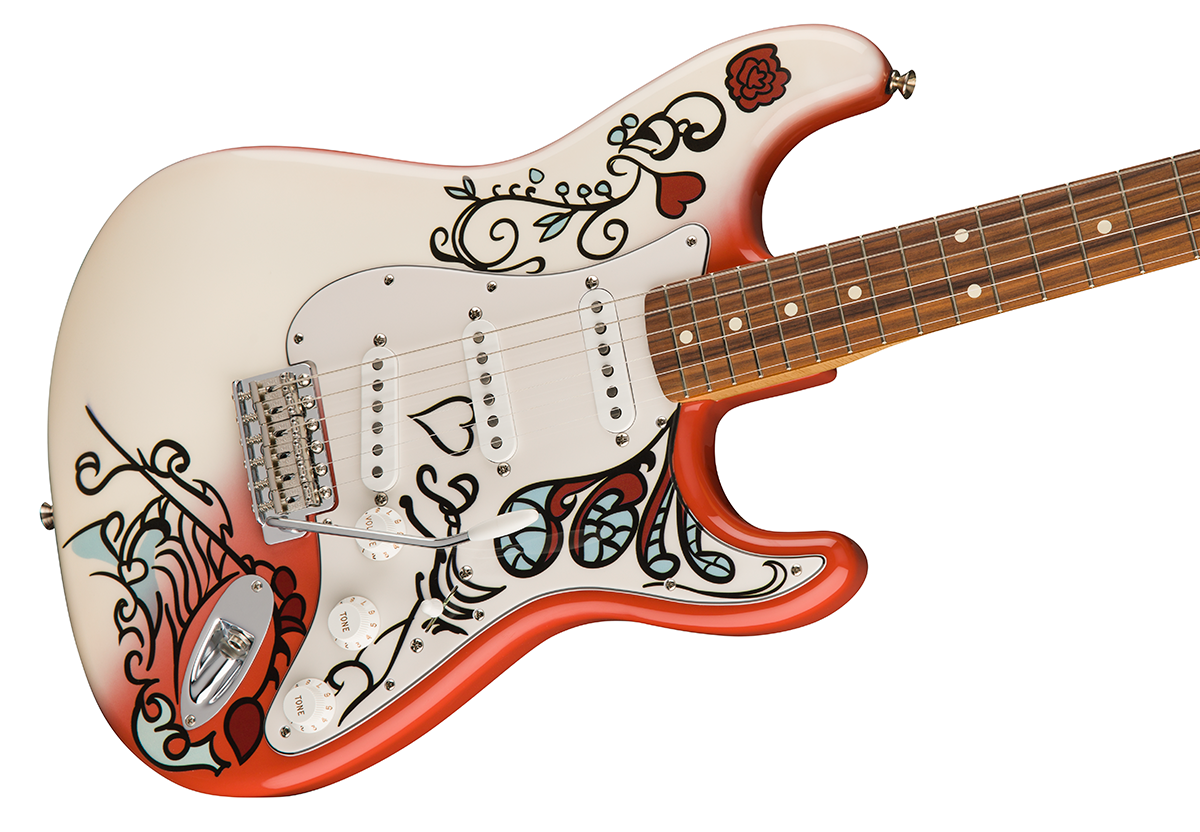 Fender Musical Instruments Corporation (FMIC) today announced the launch of its newest addition to the Artist Signature Series: the Jimi Hendrix Monterey Stratocaster®; it honors the late and great rock icon, whose persona and legacy is not only synonymous with the Fender Stratocaster, but also rock ‘n’ roll at large.

Jimi Hendrix took the world by storm with his incredible 1967 Monterey Pop Festival performance, which he concluded with the sacrificial burning of his now-iconic, hand-painted Stratocaster. First revealed at Summer NAMM 2017 in Nashville, Tennesssee, and available only for the remainder of this year, the new limited edition Jimi Hendrix Monterey Stratocaster® celebrates the 50th anniversary of this milestone in music history.

“Jimi created something amazing, embodied in Monterey with his now legendary hand-painted Fender Stratocaster,” said Janie Hendrix, CEO/President, Experience Hendrix LLC and Authentic Hendrix LLC. “In many ways, it was a representation of who he was. We wanted Jimi enthusiasts from all walks of life to be able to enjoy the magic of his art in this form. Making it beautiful and attainable is a wonderful way to celebrate the anniversary of an incredible moment in time.”

Jimi Hendrix wholly embraced the Fender Stratocaster as his preferred instrument. Like no artist before or since, his imagination and unparalleled skill as a guitarist created seemingly infinite possibilities for the Stratocaster. Successive generations of musicians have recognised this unique bond between artist and instrument. Iconic performances at the Monterey International Pop Festival and Woodstock have inspired generations of guitarists everywhere to embrace the Stratocaster more than ever.

The Jimi Hendrix Monterey Stratocaster®,priced at £809, captures all of the energy of his unforgettable set-ending finale at the Monterey International Pop Festival in 1967. An homage to the spectacular performance that quite literally burned its way into our pop culture conscience, the Jimi Hendrix Monterey StratocasterTM faithfully replicates his hand-painted psychedelic artwork on the body of the guitar.

A trio of vintage-style single-coil Stratocaster pickups give this ‘60s-style, Fiesta Red Strat® its classic Fender sound. Bell-like and articulate, it has plenty of singing sustain for soloing. The “C”-shaped maple neck bears a vintage-style 7.25”-radius pau ferro fingerboard with 21 vintage-sized frets for a playing feel just like the original. The six-screw synchronised tremolo is perfect for unleashing dive- bombs and other sonic expressions. Fully authorised, the Stratocaster features an exclusive etched Authentic HendrixTM neck plate.

“It’s an honour to celebrate such an iconic musical moment and Jimi Hendrix’s legacy on the eve of the 50th anniversary of the Monterey Pop Festival,” said Justin Norvell, SVP, Fender Products. “The Stratocaster was at the heart of countless, iconic Hendrix performances, but Monterey marked his arrival in the United States as a musical force – and Fender is proud to have been a part of that moment.

The fiery culmination of Hendrix’s set went down as one of the most-iconic images of the 20th century. Although little of the guitar remained afterward, a detailed examination of photos and video from the performance helped us develop our version of the original guitar, down to the detailed nail-polish artistry.”

In true tradition, Fender’s Artist Signature Series models honour popular and iconic musicians through product progression and storytelling, creating instruments inspired by the unique specifications of the world’s greatest guitarists. A showpiece for any music-lover’s collection, the limited-edition Jimi Hendrix Monterey Stratocaster not only preserves the memory of one of the most visually and sonically spectacular performances in all of rock history, but it also allows fans worldwide to have a true Jimi Hendrix experience with detailed artistry and craftsmanship – all at an accessible price point.