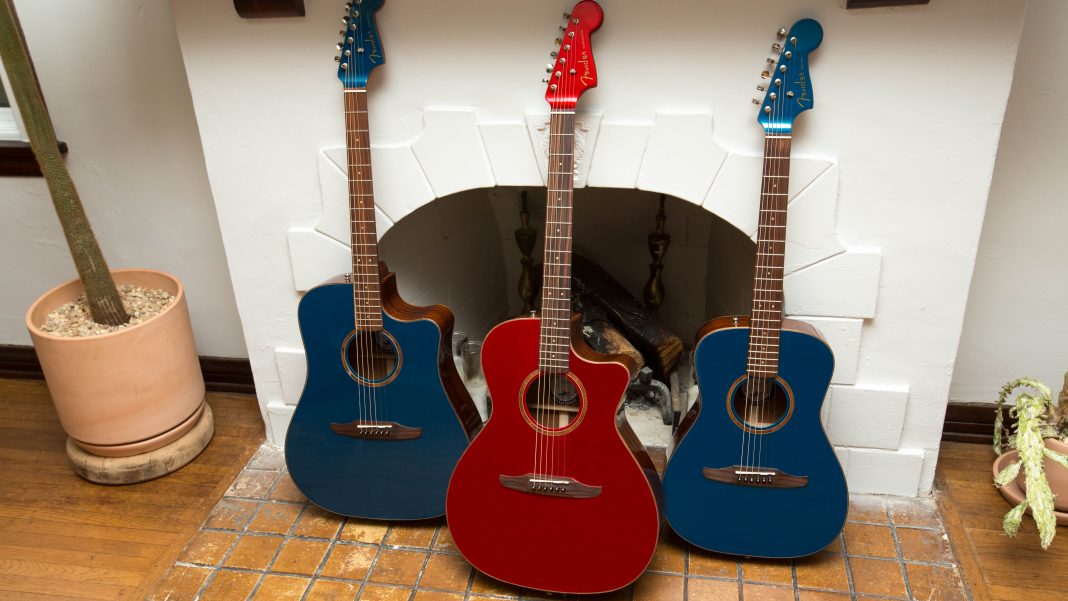 Stratocaster headstocks, vibrant colors and unique body shapes separate the Fender California series of acoustics from the rest of the herd. Announced at Winter NAMM 2018, the new range comprises three models of acoustics—Player, Special and Classic—that each come in three fresh body shapes. Here’s what we know so far:

The California Classic models sit at the top of the line, followed by Special and Player instruments. All of them boast all-solid-wood construction (spruce tops paired with mahogany backs and sides), Fishman pickups, mahogany necks with a slim “C”-shaped profile, and matching Strat headstocks. But it’s in the details where they differ: The Classics, for instance, are more elegantly appointed than their Player siblings, with pau ferro fretboards and koa binding.

Each model is available in three shapes: Redondo, Malibu and Newporter. The dreadnought-resembling Redondo is the largest of the lot, with square shoulders and a single-cutaway. The Malibu’s the most petite and has the narrowest waist, and the Newporter is similar to a grand concert; the latter has a single-cutaway, too.

Rather than letting the natural finish of the wood shine, Fender decided on 11 unabashedly modern colors, from Cosmic Turquoise to Candy Apple Red to Arctic Gold. The Special and Player guitars are fully painted, but the Classics have unvarnished sides and back to show off the natural grain of the mahogany.

The California series lists for $399.99 to $799.99, and will be available in March. For more information, check out fender.com.