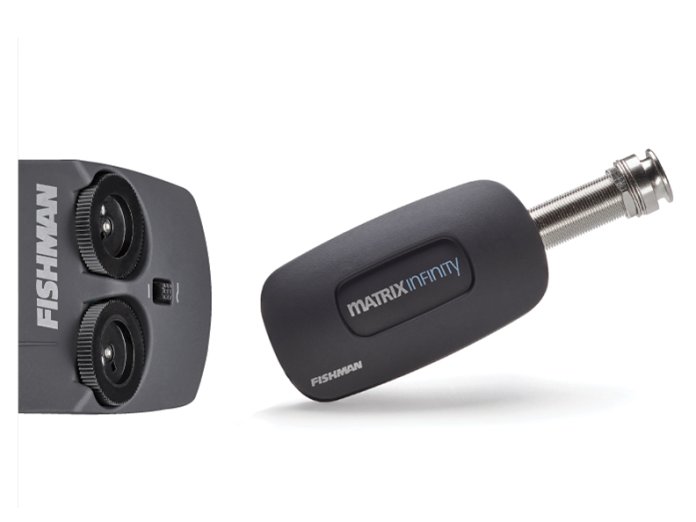 Fishman has expanded its popular Matrix under-saddle pickup line to include the Infinity VT and Infinity Mic Blend. Both draw their designs from the original Matrix Infinity, but feature new hardware and performance enhancements.

Most features of the previous Matrix Infinity have been brought forward in this update: soundhole-mounted controls, a unique mid-scooping tone control, and two switchable voices (flat and bass-boosted) to accommodate guitars of all types.

What has changed, however, are the preamps and hardware. Both the VT and Mic Blend feature completely redesigned active preamps that have been tweaked to harmonize with modern acoustic amplification systems, delivering a “clear, transparent tone with dynamic string response,” according to the company. Additionally, both products are now encased in a robust, sealed enclosure.

The Infinity Mic Blend has all the same features as the VT, but with the addition of a condenser mic that can be blended to taste with the Microphone Blend control.

“Over the years there’s been a lot of changes to the actual amplifiers and PA systems that players plug into,” said Larry Fishman, president and chief designer of FIshman.

“If a player had a small-body guitar and fingerpicked, or a dreadnought and hammered away, these extremes in playing styles and their effect on the amplifiers needed to be anticipated in the pickup system’s design. There was a lot of ground to cover. The current state-of-the-art in amplification is such that we could take a good amplifier for granted, open up the sound in the electronics a bit more, and add updated performance features.”

Watch the introduction and demo video of the new pickup systems below:

The Matrix Infinity VT and Mic Blend list for $159.95 and $299.95, respectively. For more information, visit fishman.com.