The collaboration is one of a range of projects by the Los Angeles based collective. 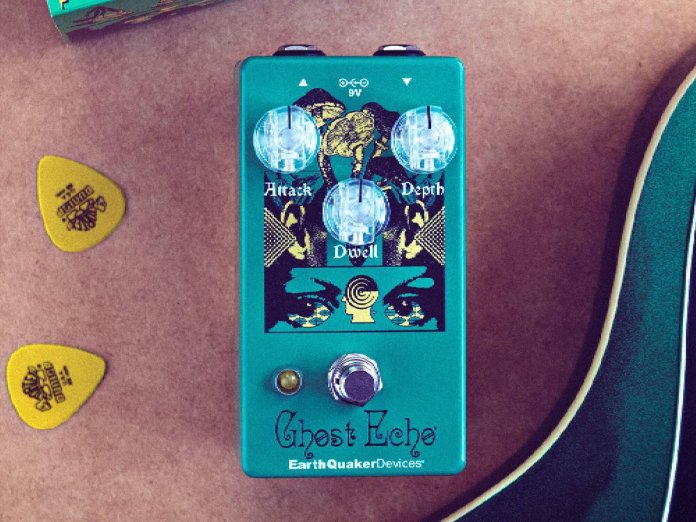 The psychedelic new design shows mushrooms, geometric shapes, eyes, ears and the Brain Dead logo in black and yellow over a green finish. A departure from the original’s simpler black and white design.

“Here at EQD, we are also inspired by much of the same cinema, music, comics, and all left-of-centre forms of art and media as the Brain Dead folks,” said Earthquaker Devices. “So, we are giddy with excitement and appreciation that the always innovative brand chose to use one of our stompboxes as a canvas for its latest creative endeavour.”

The Ghost Echo Vintage Voiced Reverb pedal is an ‘analogue/digital’ spring reverb emulation pedal with an impressive 30–150ms of pre-delay and the capacity for self-oscillation at high settings.

These are suited, in EQD’s words, “for everything from a quick rockabilly slapback to viscous pools of ectoplasmic reverberations,” the Ghost Echo emulates old-school amp-top spring reverb units with an extra, atmospheric dimension.”

Brain Dead describes itself as “not one person, nor is it one idea. It sits in the space between people.” It frequently collaborates with a wide range of artists and companies, most recently on a clothing line with fantasy card game Magic: The Gathering.

Brain Dead has also recently designed a pair of roller skates with Them Skates, a signature jump rope and t-shirt with fitness brand Rx Smart Gear and undertaken a three-way collaboration with the band Interpol and skateboarder-photographer Atiba Jefferson; designing a bespoke t-shirt line in celebration of Interpol’s seventh album, On The Other Side Of Make Believe.