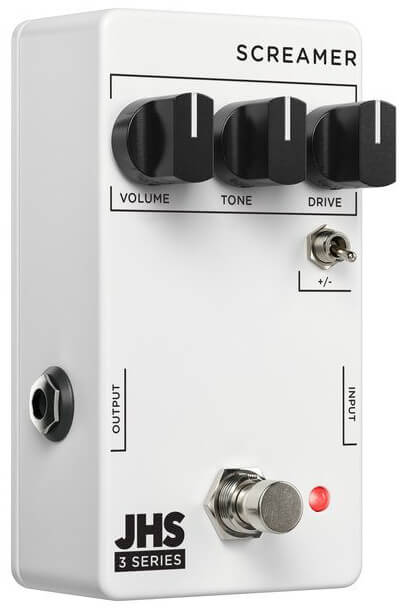 With each pedal in the 3 Series sporting the same chassis and satisfying three-knob design, the overdrive pedal fits in perfectly with classic Volume, Tone and Drive controls. While all the other 3 Series pedals are simply named by their function (Chorus, Phaser and so on), however, the Screamer’s name makes clear that it is based on another circuit. It also departs from other copies of the lauded Tube Screamer by losing the green paint job in favour of an all-white design.

“I know what you’re thinking,” said Josh Scott in a video released by the company, “why another Tube Screamer?” It’s a good question, with dozens of clones of the iconic green pedal in existence. The 3 Series Screamer, though, is in fact based on a highly sought-after modded version of the Tube Screamer that harks back to Scott’s early days in circuit design.

“I first started tinkering with the circuit of the Tube Screamer when I was learning to modify and build pedals and understand classic circuitry,” explained the designer, “and that led to me buying TS9s or US customers sending in your TS9 to me; and I would modify it into what I called the JHS Strong Mod. […] It became a very popular alternative for people who were okay with the Tube Screamer but wanted it to be louder, clearer and different enough that no-one else was doing a mod in that fashion.”

In the years that followed, more JHS models that were loosely based on or included the Strong Mod’s Tube Screamer-based circuitry were released, including the Double Barrel, Low Drive and Moonshine. Of all of these, the JHS 808 came closest to a genuine clone, but was quickly discontinued in favour of other pedal designs. Now, for the first time since then, the Strong Mod circuit is back in a standalone form, and for a highly competitive price.

The JHS Pedals 3 Series Screamer is available now. Find out more at jhspedals.info