Three pieces of music history go under the hammer. 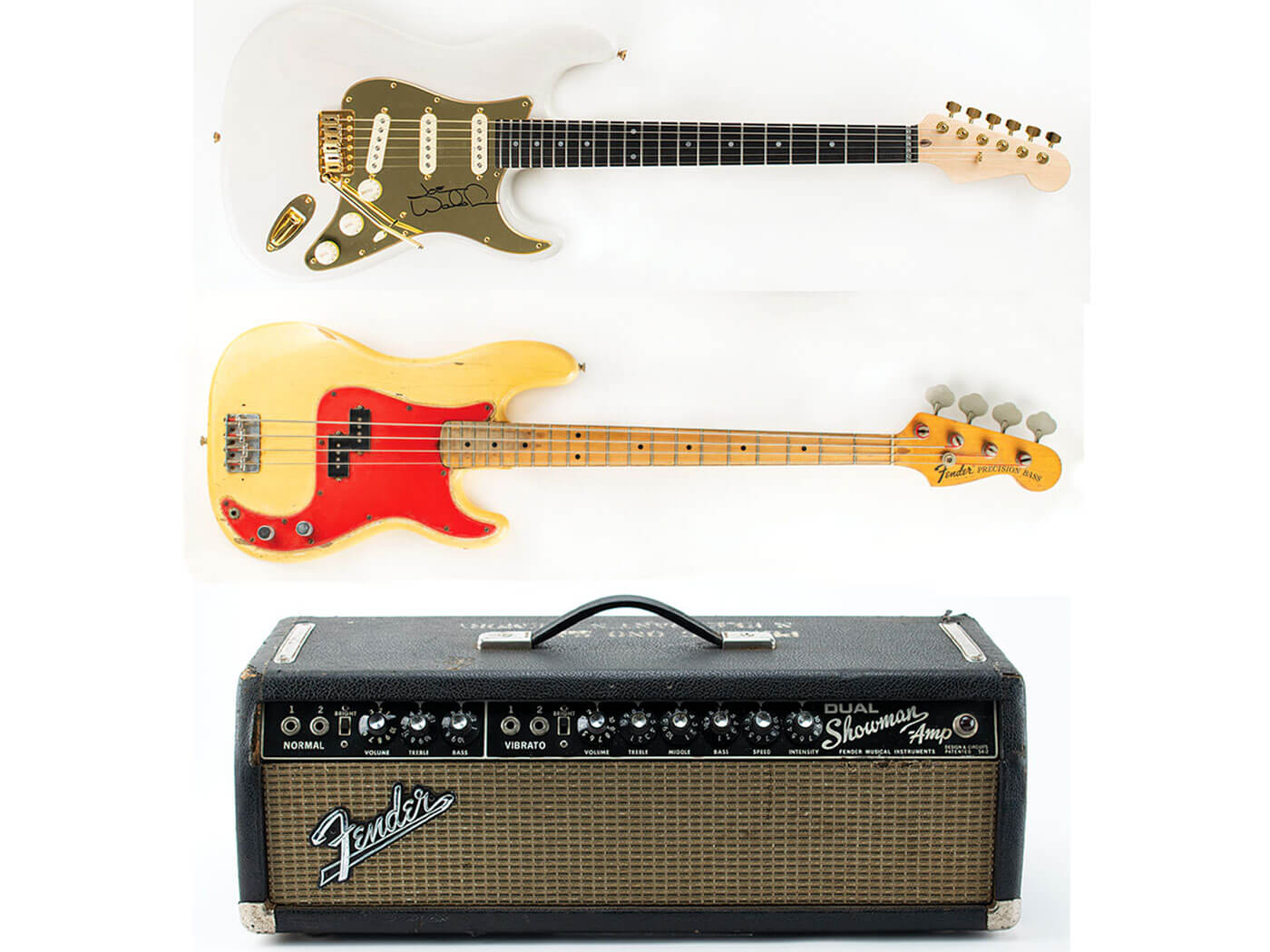 This week, three items from rock ‘n’ roll history are up for auction, each from a different walk of musical life: a 1975 Fender Precision Bass owned and used on stage by Dee Dee Ramone, a custom Stratocaster-style guitar assembled by Eagles’ Joe Walsh, and a Fender Dual Showman amplifier used onstage by John Lennon.

This 1975 Fender Precision bass, as you can see, has suffered some true wear and tear over the years. It’s the most-used of three Precision basses used by Dee Dee onstage between 1979 and 1982. The original black pickguard has been removed and replaced by a red one, which itself has been caulked to prevent Dee Dee’s profuse sweat from energetic performances leaking into the control cavity and shorting out the electronics. The neck has also seen a fair amount of finish removed over the course of its extensive use.

It comes with a note from friend of the band Chris Lamy, clarifying that this bass was Dee Dee’s number one out of his three: “My name is Chris Lamy and I was a personal friend of The Ramones. This white, Fender Precision Bass serial number 634080 was manufactured in 1975 and owned and used by Dee Dee Ramone from 1979 through 1989. The bass was one of three white Precision basses used by Dee Dee onstage between 1979 and mid-1982 when new basses were purchased. Dee Dee continued to use the bass for recording until 1989. When Dee Dee left the band in 1989, the bass was sold to the studio owner to ‘cleanse himself’ of the band.”

This custom Stratocaster-style guitar was assembled by Joe Walsh himself, and played onstage for the TV recording The Night That Changed America: A Grammy Salute to The Beatles.

The guitar has a set of gold hardware and a gold pickguard, as well as standard Stratocaster-style controls and pickups. The headstock, however, with a natural finish, is blank.

The guitar comes accompanied by several photos of Walsh playing it during the TV performance, as well as a certificate of authenticity from Mark Reis, the guitar tech for Walsh and the Eagles, which confirms that Walsh signed the guitar.

It comes with a letter signed by Gary Van Scyoc, the bassist for Elephant’s Memory, certifying its authenticity. It reads, in part: “After inspecting and evaluating the item listed, I, Gary Van Scyoc, certify that this 1966 Fender Dual Showman Amp chassis ser. no. 05389 is indeed the genuine amplifier used by John Lennon’s Plastic Ono Band and Elephant’s Memory Band, of which I was a member of during the iconic August 30th, 1972 ‘John Lennon Live In New York City’ Madison Square Garden concert and subsequent live recording release of the said concert on February 10th, 1986, as well as numerous recording sessions for John Lennon, Yoko Ono and Elephant’s Memory during the period between 1972 and 1974.”

Bidding for all three items concludes on 18 June. View the auctions and bid over at rrauction.com.