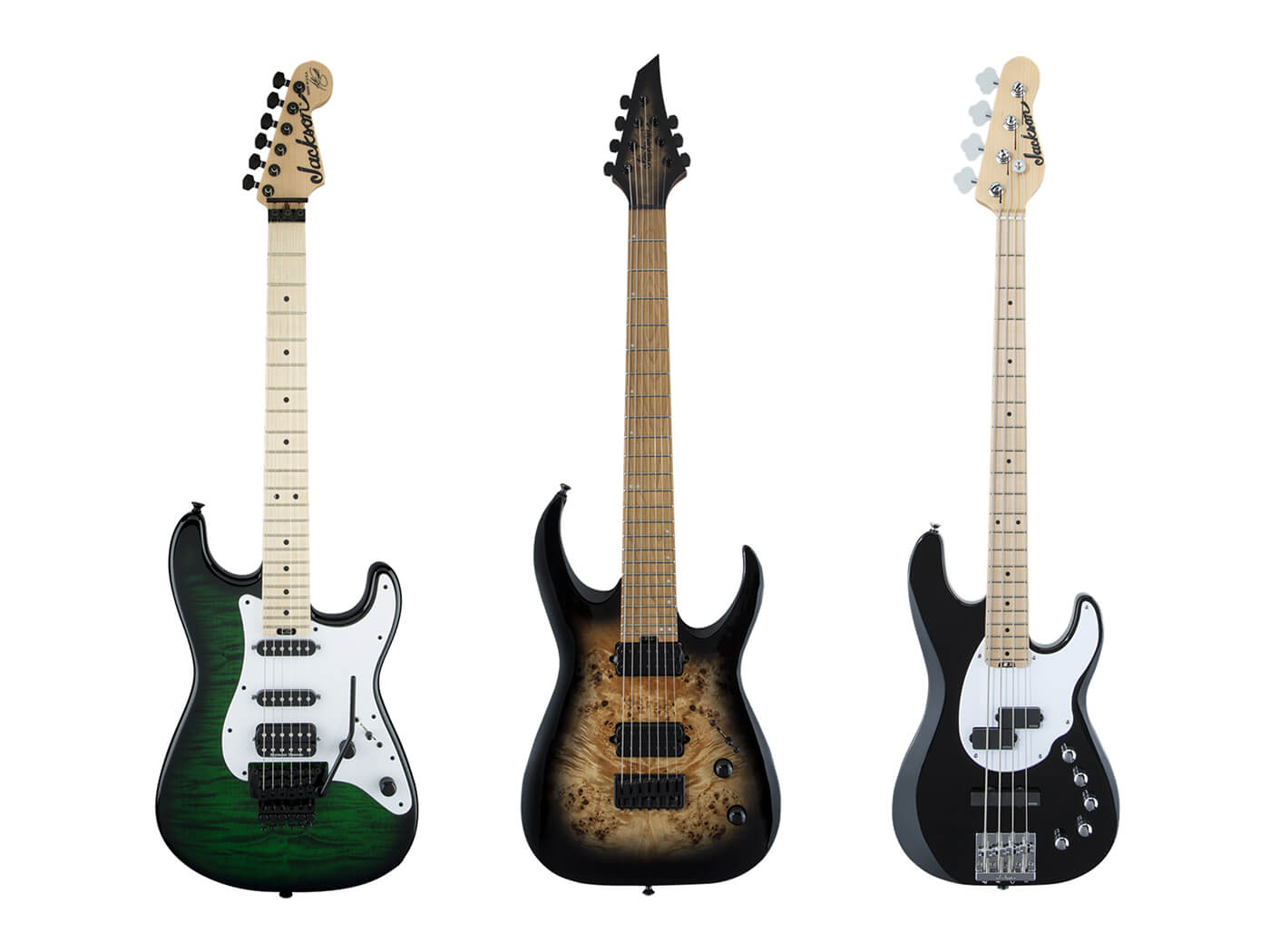 This axe stands out with its striking quilt maple top that’s layered above a lightweight alder body. Its also features a bolt-on quartersawn maple neck that has a smooth hand-rubbed urethane back finish and a pair of graphite reinforcement rods for extra ruggedness. Complementing the neck is a 12 to 16-inch compound radius fingerboard that’s primed for rapid soloing and heavy chugging.

Smith’s new signature model gets its bite from a HSS pickup configuration. This comprises a Duncan JB TB-4 humbucker at the bridge – tuned to upper midrange attack – as well as two Samarium Cobalt noiseless single-coils at the middle and neck positions, respectively.

The guitar is also anchored by a Floyd Rose Original double-locking tremolo system designed to keep it in tune through the “roughest playing”, according to Jackson.

Available in Transparent Green Burst finish and lists at £2,479.

At a list price of £509, this axe is a more affordable option for fans of the Iron Maiden guitarist. It features a San Dimas body crafted from basswood, a bolt-on maple neck and a 12 to 16-inch compound radius maple fingerboard. It also offers a HSS pickup configuration that consists a Jackson high-output humbucker and two Jackson single-coils.

Available in Snow White with a white pickguard. Lists at £509.

This seven-stringed beast features a resonant basswood body and an arresting poplar burl top. It also boasts a bolt-on caramelized maple neck that has similar graphite reinforcements as the model above.

Catering to Mansoor’s rapid-fire leads, Jackson has fitted this axe with a 20-inch flat radius caramelised maple fingerboard that has rolled edges for extra comfort. The fingerboard is also lined with luminous side dots, which come in handy on dark stages.

Mansoor and Jackson worked closely to formulate the HT7P’s pair of MM1 pickups. According to the brand, these pups are voiced for great dynamics and can also accommodate heavier picking styles.

Wrapping up the guitar’s menacing look is a Black Burst Burl finish – with a matching headstock – and black hardware.

Ellefson’s fresh Jackson signature bass comes in four- and five-string configurations which are denoted as IV and V, respectively. Each features a uniquely designed poplar body that has an upper and lower contour. The former gives you a sturdy foundation for picking and fingerstyling, while the latter lets you rest the instrument comfortably on your knee.

Similar to the two instruments above, each bass comes with a bolt-on quartersawn maple neck with graphite reinforcement for added stability. Sitting atop the neck is a 12 to 16-inch compound radius maple fingerboard that contributes to both enhanced comfort and “speedy articulation”, according to Jackson.

Each bass is loaded with a pair of EMJ pickups: A J pup at the bridge, and a P pup at the neck. They’re designed to help you cut through the mix with increased output and lots of punchy mid-range. The instruments’ tone is further augmented by a Jackson HiMass bridge, which is able to increase your attack’s sharpness while also affording greater sustain.

Both versions are available in Gloss Black and Snow White finishes. The four-string version lists at £659, the five-string at £699.

More info at jacksonguitars.com. And for the latest Summer NAMM news, click here.