#SummerNAMM2016: Guild Guitars has announced three new releases at this year’s Summer NAMM show. The new additions to the Guild range are the Bluesbird, S-200 T-Bird and the travel-size Jumbo Junior.

GUILD GUITARS UNLEASHES MOST ANTICIPATED REISSUE YET: THE S-200 TBIRD 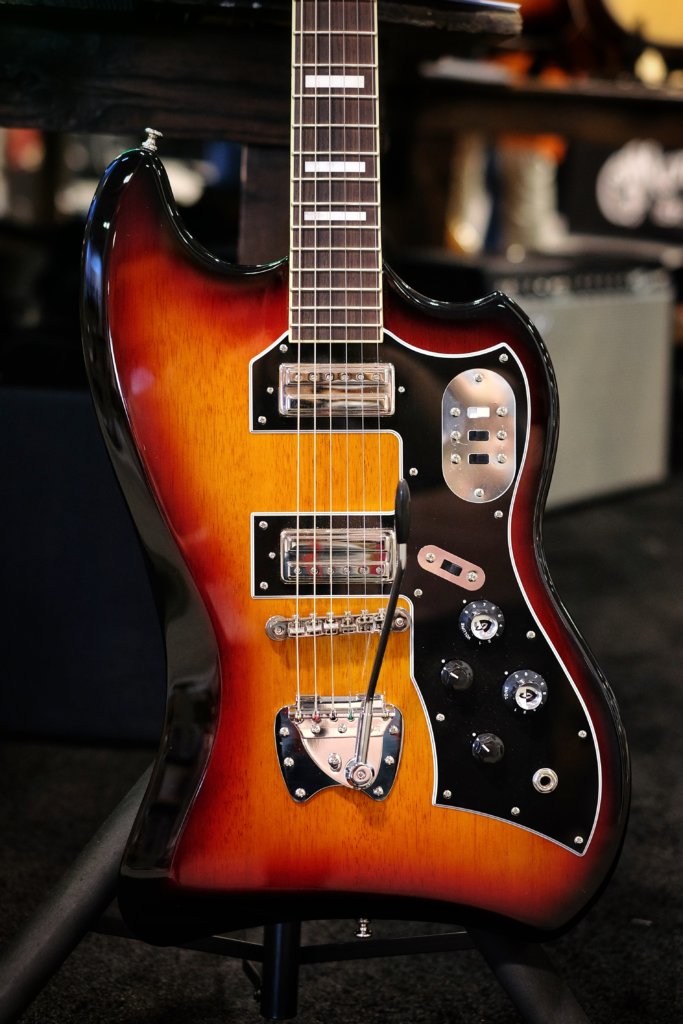 Guild is thrilled to announce the highly anticipated reintroduction of one of its most iconic, uniquely recognizable guitars: the S-200 T-Bird. This reissue is a replica of the original versions produced between 1964 and 1968, featuring an asymmetrical all mahogany body sure to catch the eye of the guitarist looking to blaze his or her own trail. However, this guitar’s appeal isn’t just about its looks – its unique controls create the widest variety of tones offered on any Guild instrument, drawing on its dual Guild LB-1 Little Bucker pickups to achieve almost every conceivable color on the palette.

The LB-1s are replicas of Guild’s original humbuckers, offering an array of tones from sparkly clean single coil-esque spank to thick and warm humbucker sounds that fatten and sing when driven. Switching capabilities include rhythm or lead modes, pickup on/off, and standard volume and tone controls. When engaged, an optional tone capacitor creates single-coil tones while maintaining the hum-free reliability of the LB-1s.

The T-Bird also features a Hagstrom Vintage Tremar, a reissue of the vibrato system featured on many of Guild’s solid body electric models from the 1960s. The Tremar’s fully adjustable spring allows everything from smooth bends and vibratos to a more stable hard-tail feel.

GUILD UPDATES ITS BELOVED BLUESBIRD WITH A MODERN LIGHTWEIGHT REISSUE 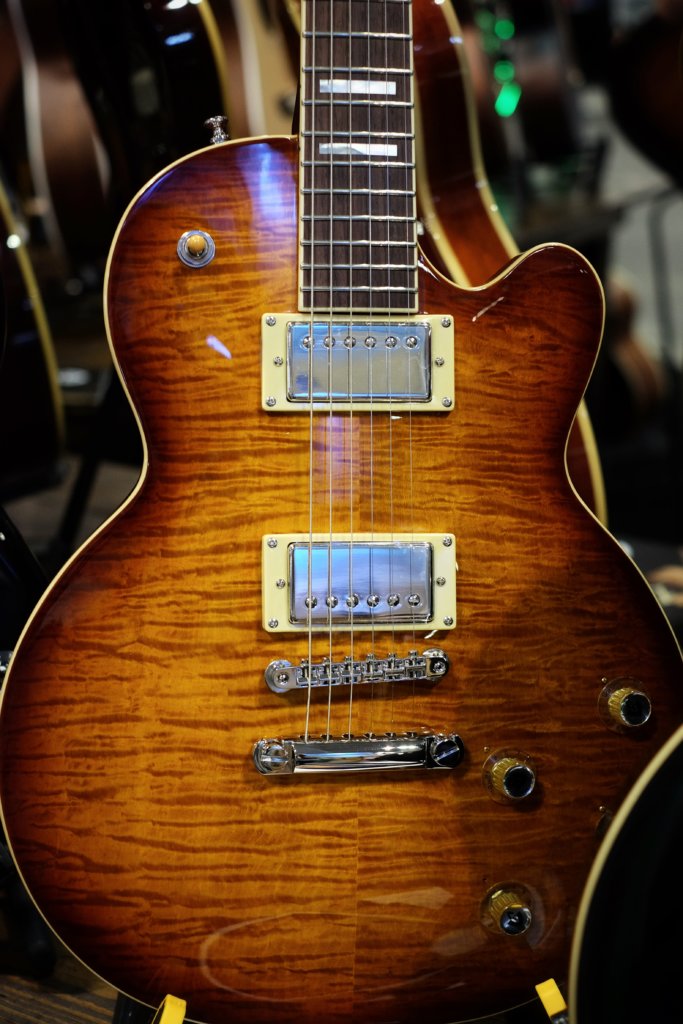 The Bluesbird reflects Guild’s return to yet another historic solid body model. Originally released in 1970 as the solid body counterpart to the M-75 Aristocrat, the Bluesbird was subject to a few design changes over the decades. Today’s reissue features a carved maple top and maintains many of the aesthetic traits of the M-75 Bluesbird of the late 60s.

Its lightweight chambered mahogany body allows for improved resonance and unparalleled comfort, making this guitar one of the lightest in its class. The Bluesbird features a 24 3/4” scale, and fast-playing vintage C shaped neck.

While many of the Bluesbird’s specifications remain faithful to the original model, today’s updated version comes equipped with USA-made Seymour Duncan pickups, as well as a TonePros locking tune-o-matic bridge and stopbar tailpiece to offer the most versatile version of this guitar to date. Grover Sta-Tite tuning machines and Guild’s deluxe padded gig bag round out this ultimate package.

The Bluesbird is available in a sleek Jet Black, and Iced Tea Burst with a flamed maple top.

THE NEW TRAVEL-SIZED GUILD JUMBO JUNIOR IS HERE, JUST IN TIME FOR SUMMER! 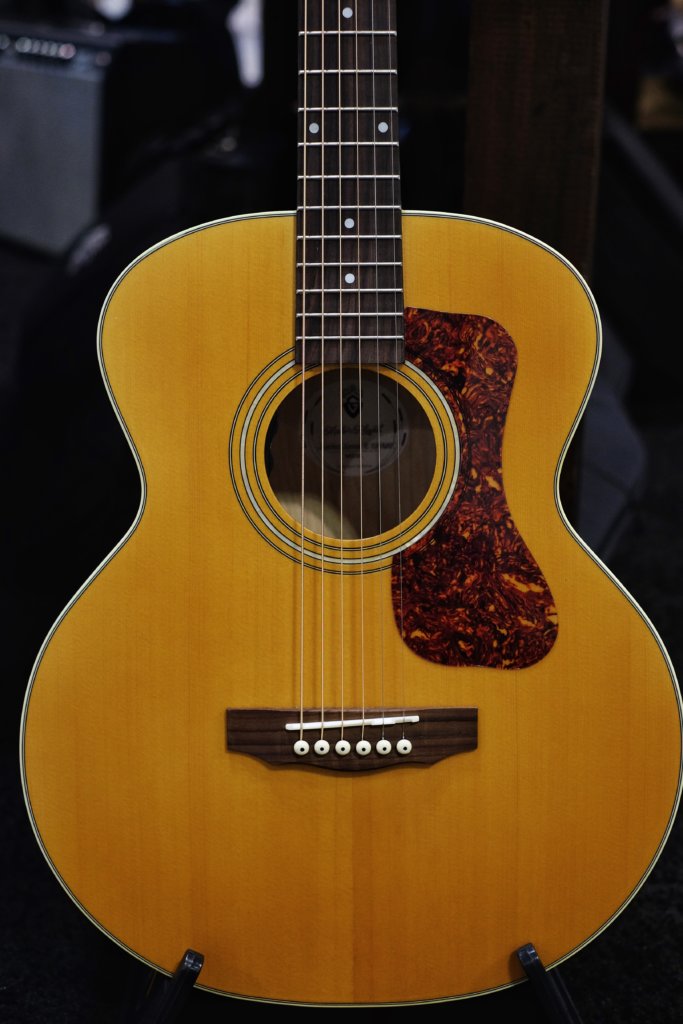 Guild now offers its classic jumbo shape in an affordable smaller size. Whether on the couch, in the studio or on the go, the Jumbo Junior’s compact design allows you to have a Guild by your side at all times. Fun and comfortable to play, the Jumbo Junior’s warm tone and surprising volume will inspire many memories, group sing-alongs, and weekend jam sessions.

Featuring a solid Sitka spruce top and the choice of an arched mahogany or maple back, the Jumbo Junior offers Guild’s classic aesthetic for those who love the look of a jumbo, but may not love the size. Top it off with Guild’s AP-1 pickup, and a [deluxe] padded gig bag, and the Jumbo Junior is ready to go whenever you need to get your Guild on.